Berlin is regarded as one of the world’s street art capitals attracting international artists to decorate its walls over the years with some spectacular murals. Photos taken by Buenos Aires Street Art. Kreuzberg as been regarded as the number one district in the city for street art. Several of the most iconic murals in Berlin were painted by Italian artist Blu in 2007 and 2008 in Kreuzberg The first mural, a collaboration between Blu and French artist JR, depicts two figures in the act of unmasking each other with one hand, while their other hand they display letters formed with their fingers. An ‘E’ and a ‘W’ relating to ‘east side’ and ‘west side’ respectively. 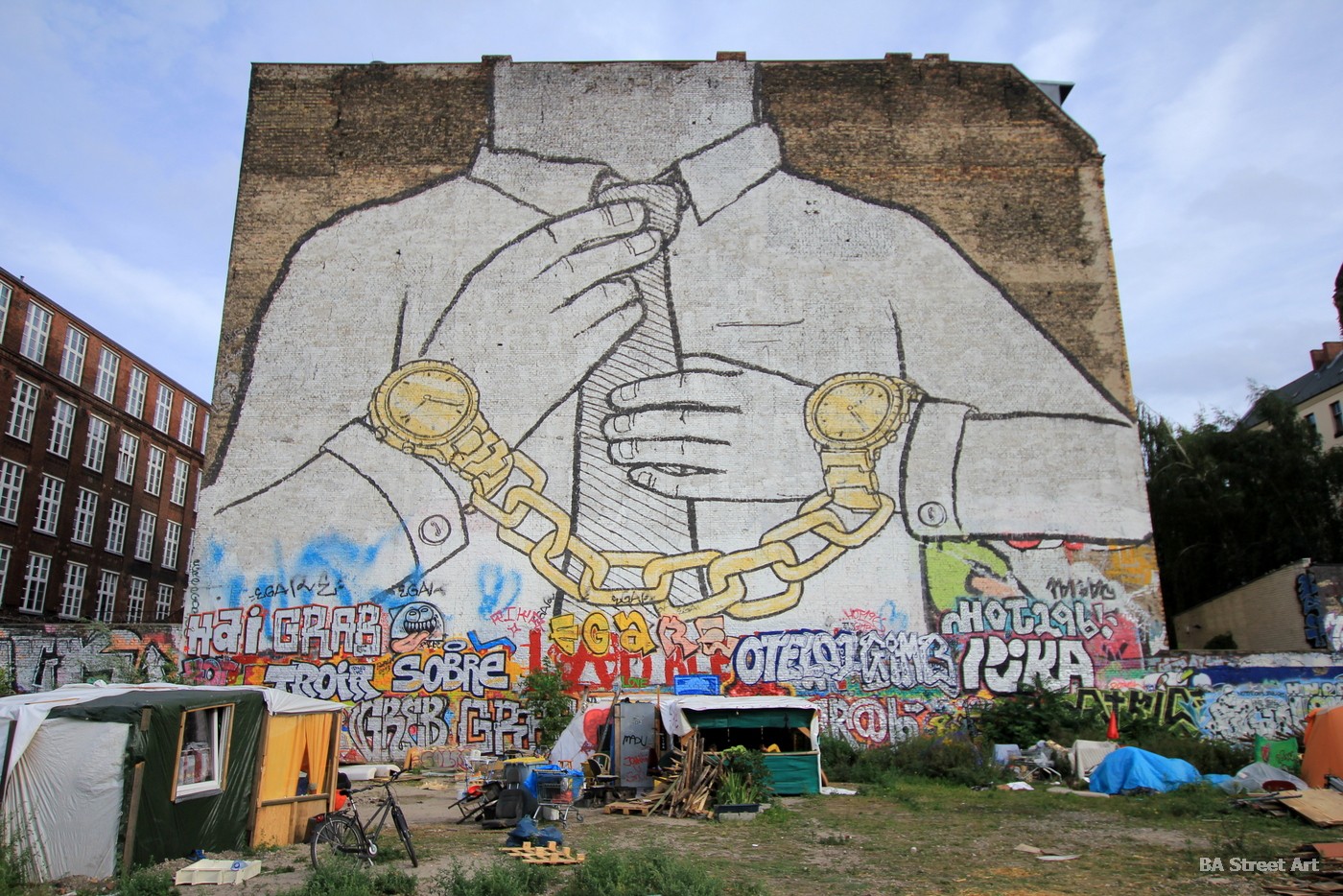 Blu painted a second mural on an adjacent wall that featured a businessman or company boss adjusting his tie while wearing two gold watches chained together like handcuffs – as if a prisoner of his own capitalist greed.

In December 2014, Blu came back to Berlin and decided to paint over his murals with black paint. The act received a lot of press coverage and different interpretations about his motives as well as igniting a debate about street art’s role in gentrification.

Blu’s murals have always had a sense of place closely tied to the neighbourhood, city and country where they were painted, often closely tied in to causes that affect the local community.  The fact that the street art itself in Kreuzberg, and Blu’s mural being one of the most iconic, had played a part in the gentrification of an area that was once home to students, musicians, artists who have been slowly displaced by yuppies and office workers would have hurt him. 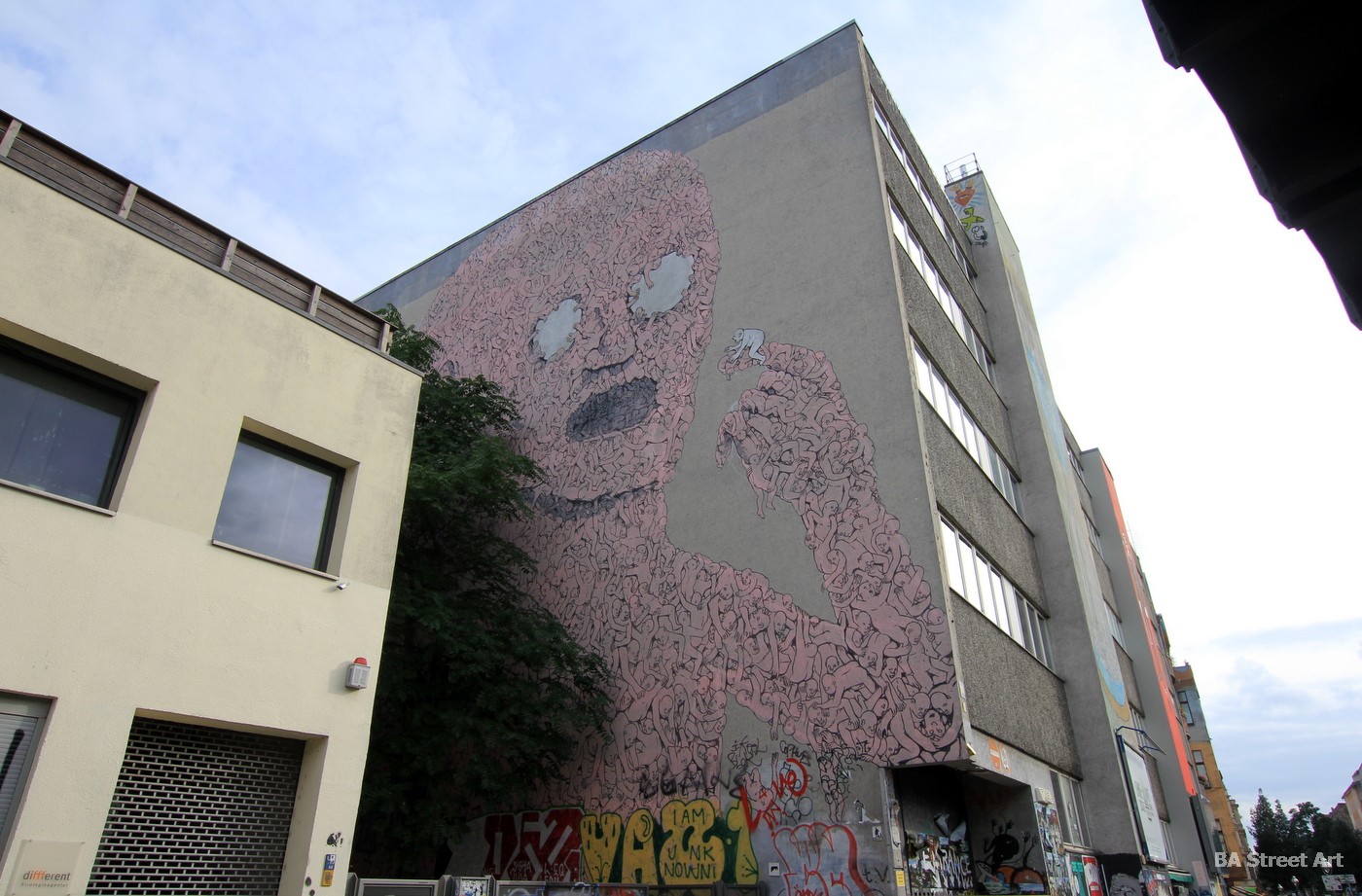 One mural by Blu you can still see is located on the west side of Oberbaum Bridge in Kreuzberg. Known to some as the ‘Pink Man’, the first features hundreds of tiny men entwined like small snakes to form the shape of a man wearing glasses. 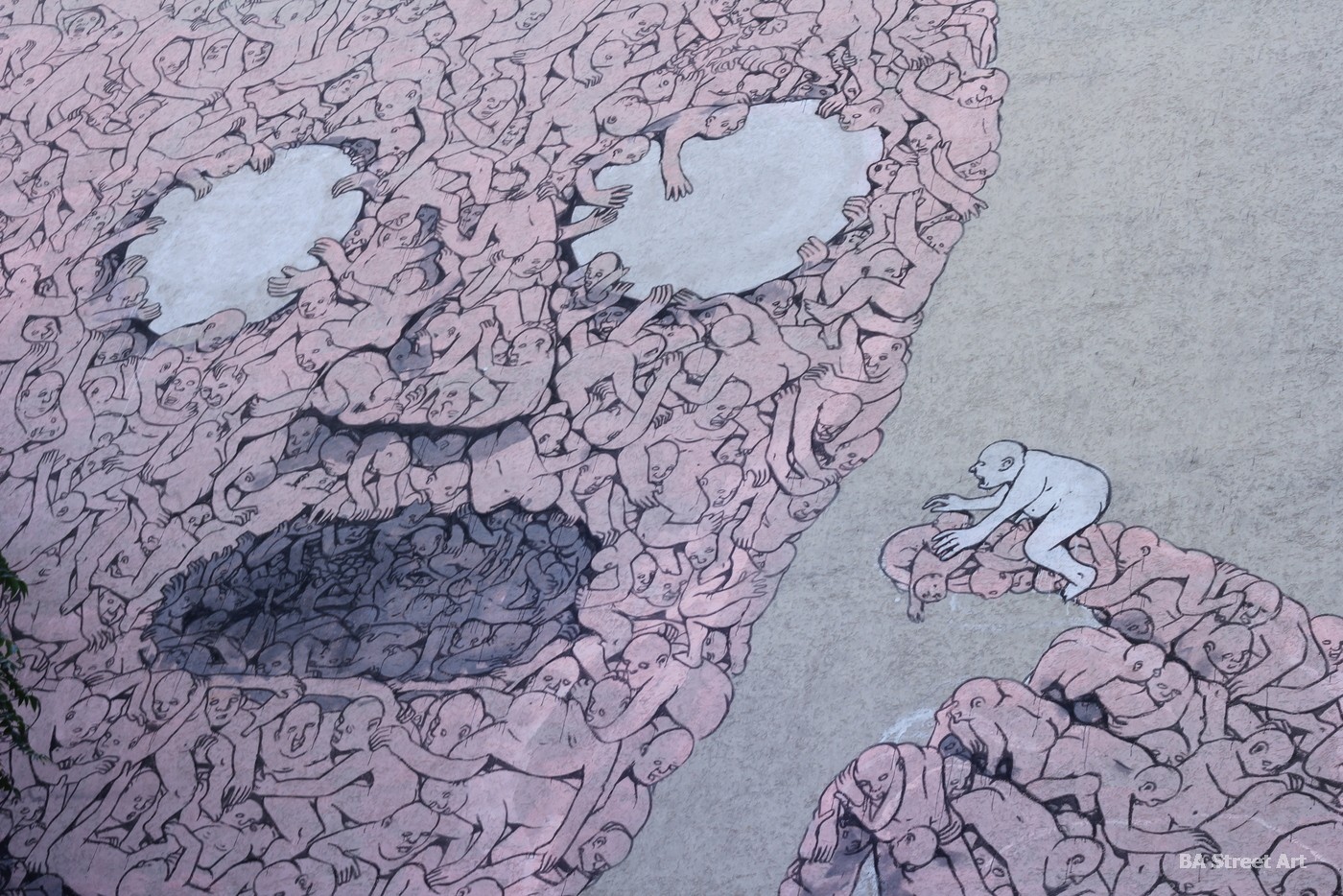 The monster-like creature has his mouth open and looks down upon a mini-white man he’s holding in his left hand as if he’s about to eat him. Blu also painted another on the same street as the ‘Pink Man’ relating to global warming. It features an hour glass with a disintegrating iceberg melting to form a city below. 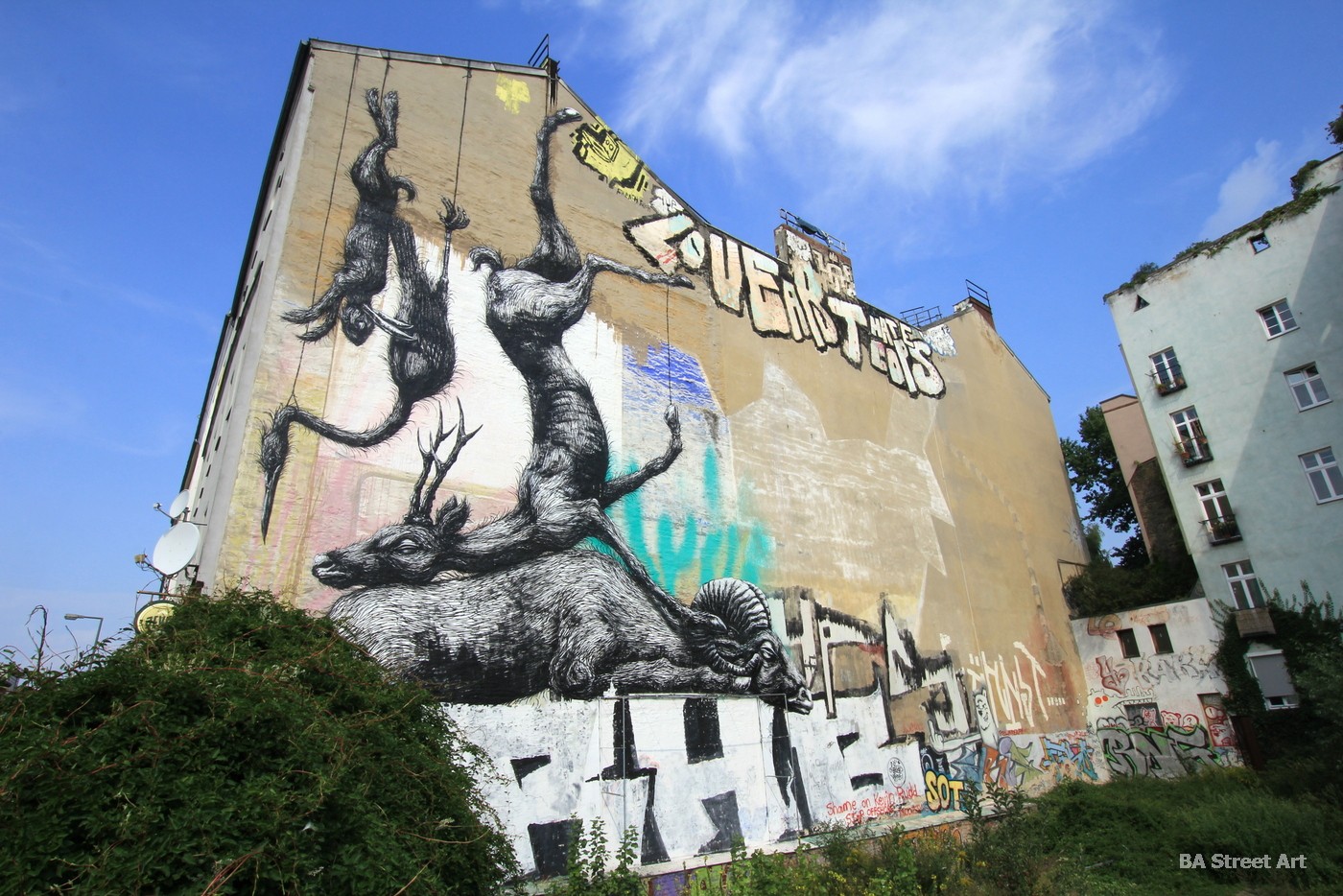 Belgian painter Roa, who is known for his murals featuring black and white animals, has visited Berlin on many occasions. His best-known mural is located on the corner of Manteuffelstrasse and Oranienstrasse. It features three hanging dead animals – a rabbit, crane and deer dangling from the rooftop resting on top of a goat. 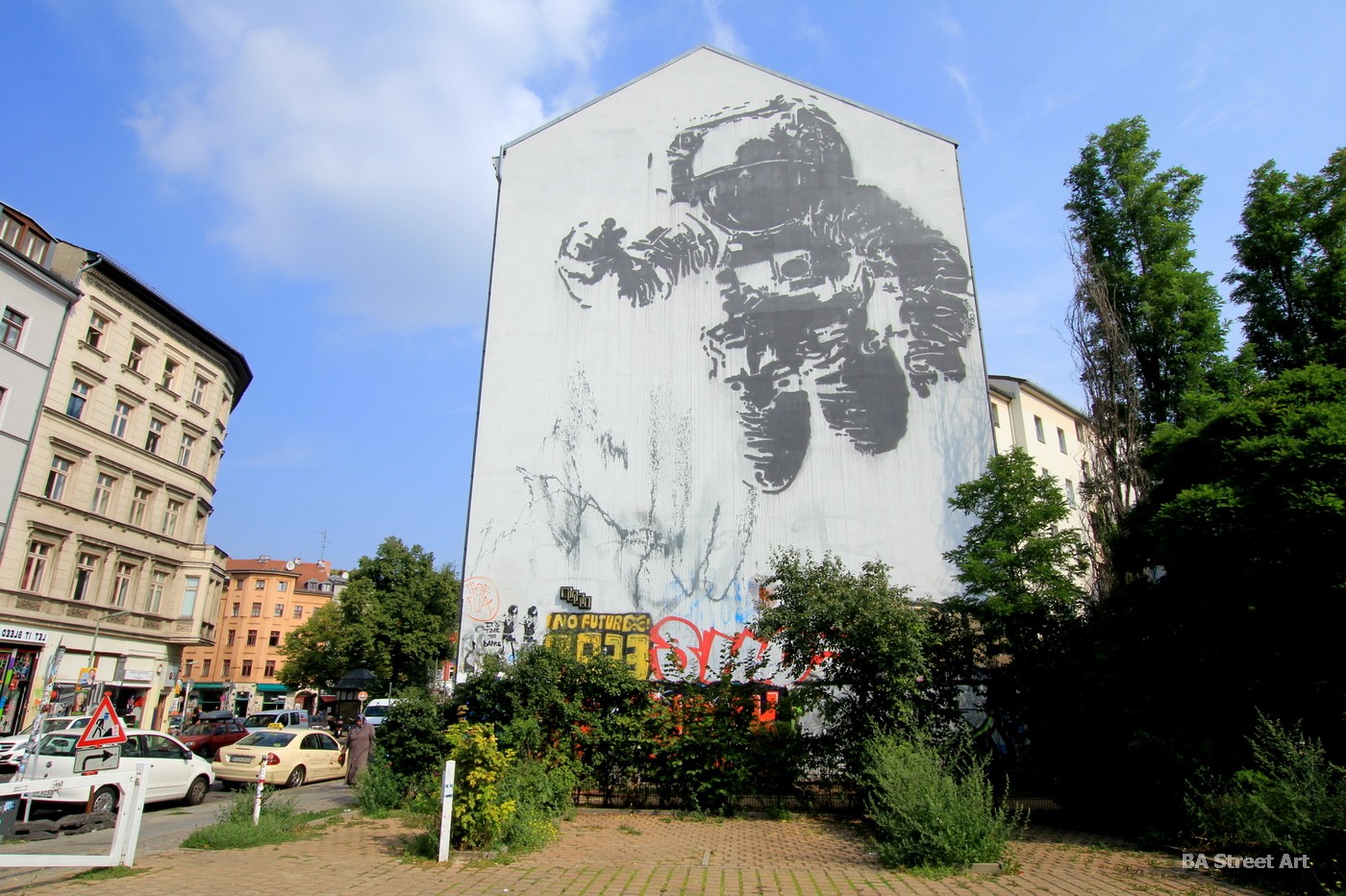 The ‘Astronaut Cosmonaut’ by Victor Ash on corner of Mariannenstrasse and Oranienstraße is another mural that has achieved almost cult status. The French artist painted the artwork in 2007 and it’s become a tourist attraction and landmark. French street artist JR visited Berlin in 2013 and created 15 black and white portrait photographs of elderly people in different locations of the city for Wrinkles of the City project. Such is the nature of photographs or artworks pasted on to walls is that they don’t last too long. This half face of an oldman at Soho House on Prenzlauer Allee became one of JR’s most photographed pieces.

The East Side Gallery is one of Berlin’s most historic landmarks and has become a true open air urban art gallery. During the years that the Berlin Wall was put up, graffiti covered the West side of the wall, but the East was left bare, due to its inaccessibility and communist controls. The 1.3km part of the Berlin Wall is decorated with numerous murals and visited day and night. 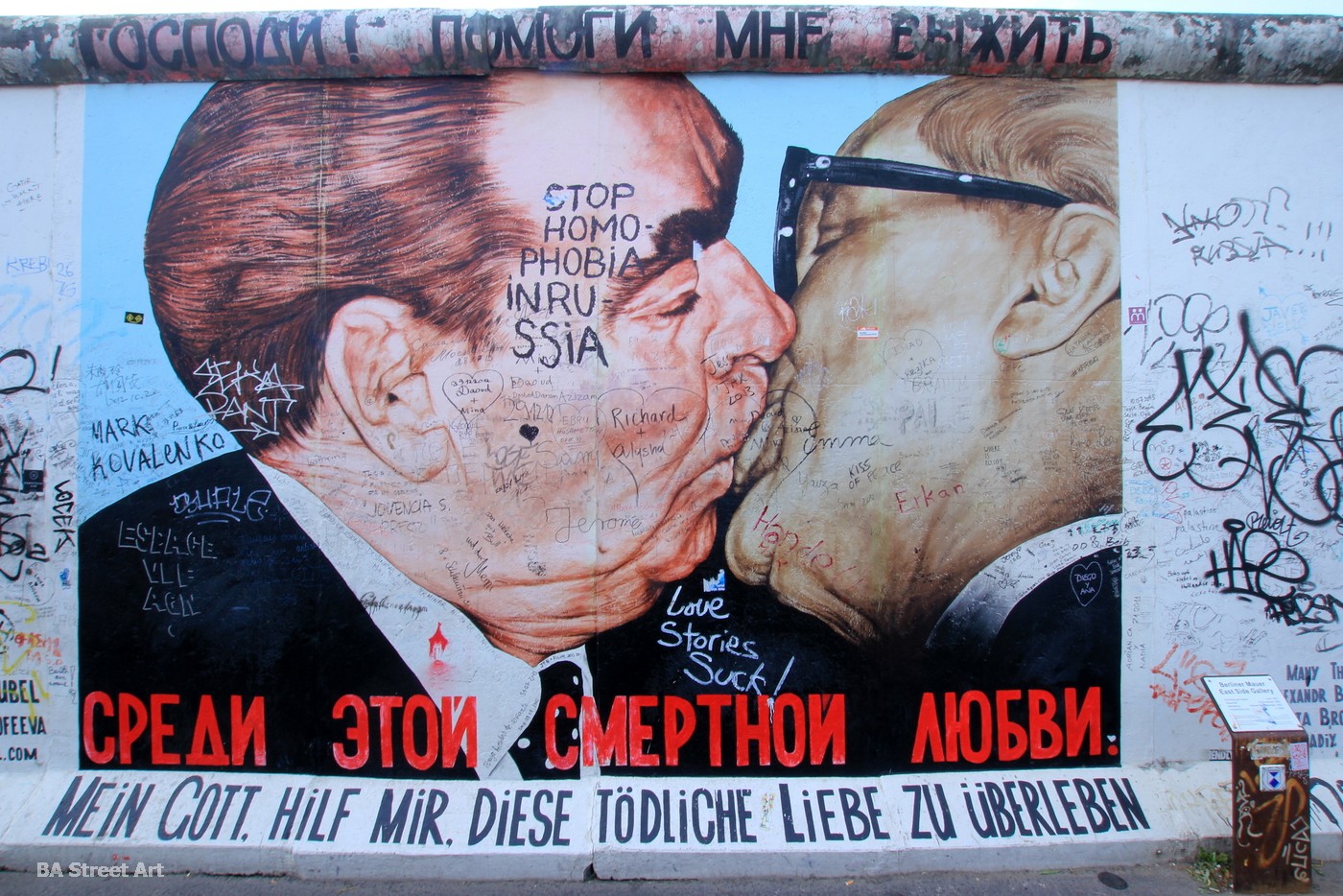 Perhaps the most famous mural on the wall is that of Leonid Brezhnev and Erich Honecker kissing. It was painted by artist Dmitri Vrubel in 1990 and entitled ‘My God, Help Me to Survive This Deadly Love’. It’s a reproduction of a photograph taken in 1979 during the 30th anniversary celebration of the foundation of the German Democratic Republic. Another of the most iconic artworks on the Wall is The Trabant mural by Birgit Kinder painted in 2009. Nicknamed the Trabi, it was once the most common car in East Germany. The numberplate of the car reads ‘Nov 9-89 referring to the date of the fall of the Berlin Wall. A mural by Michail Serebrjakow, shows a thumb being held up by a chain to keep it in a positive, thumbs-up position. The artwork shows the forceful nature of the East German government to preserve communist ideals and quash dissenting voices. Thierry Noir is credited as being the first artist to have ilegally painted the Berlin Wall as far back as 1984 as a form of protest. Noir says he used to live in a squat near the Wall and would evade guards to paint art as a “palimpsest of protest”. RAW-Gelände (at Revaler Strasse 99), a once abandoned train factory has been converted into a complex of bars, restaurants and nightclubs and is a graffiti hotspot. Portuguese street artist Vhils, who is well-known for carving portraits of people on walls with a hammer drill and rock hammer. These portraits of modern day people who have helped transform the city of Berlin were commissioned for an advertising campaign sponsored by Levi’s called ‘Go Forth’. 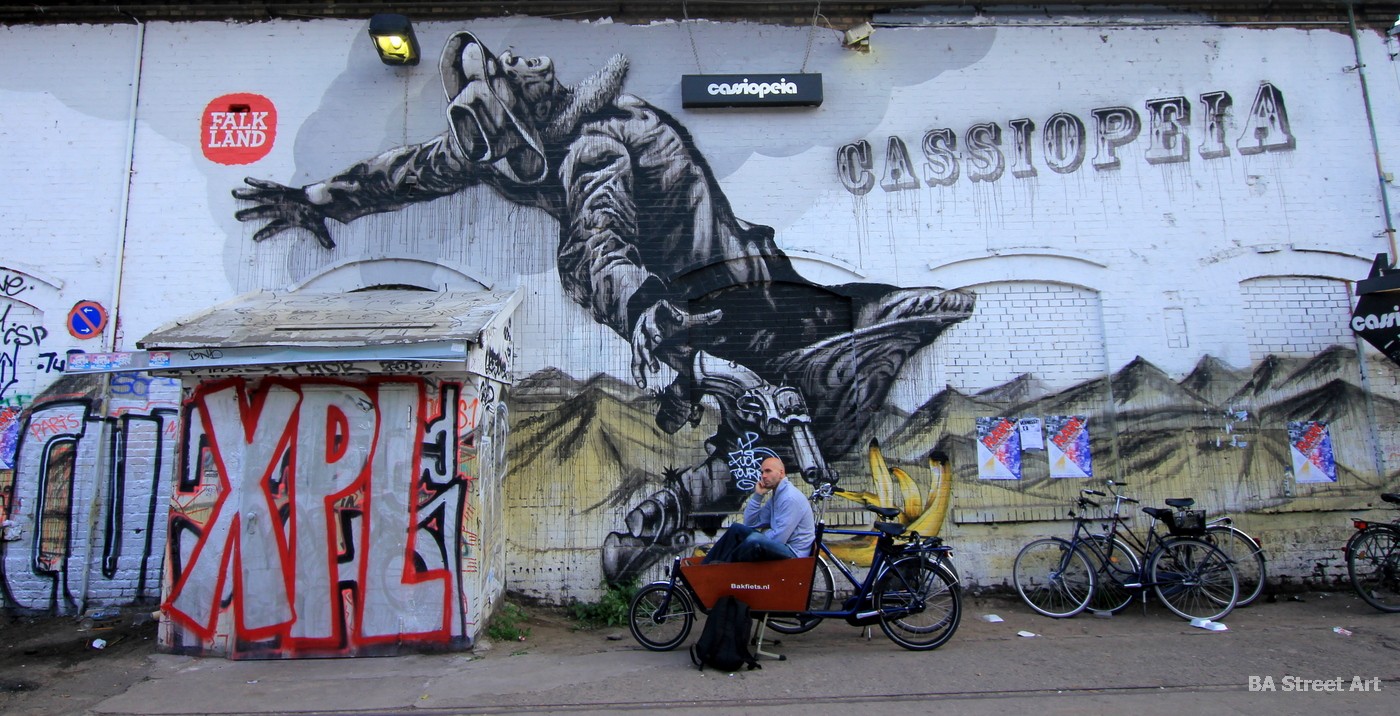 These photos were all taken in 2014 © Buenos Aires Street Art. Check out more cities that are great for street art on our street art cities page 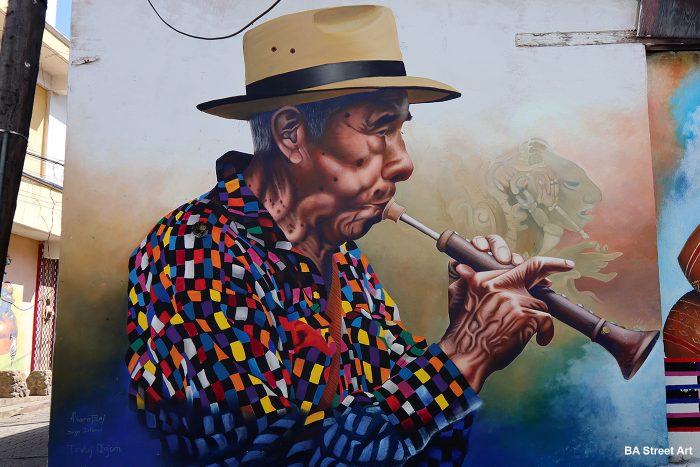 END_OF_DOCUMENT_TOKEN_TO_BE_REPLACED

San Juan La Laguna is one of the best villages around Lake Atitlan in Guatemala to visit art galleries and... END_OF_DOCUMENT_TOKEN_TO_BE_REPLACED

Guatemala City isn’t the first city in Latin America you’d associate with street art and graffiti but there are some...