San Juan La Laguna is one of the best villages around Lake Atitlan in Guatemala to visit art galleries and see murals on its colourful streets. Photos by Matt from Buenos Aires Street Art who was in Guatemala a few weeks ago. The village is known for its agriculture, medicinal herbal gardens, textile and weaving work with natural dyes and more recently its quiet streets filled with murals have become a tourist attraction. This was our favourite village on Lake Atitlán. 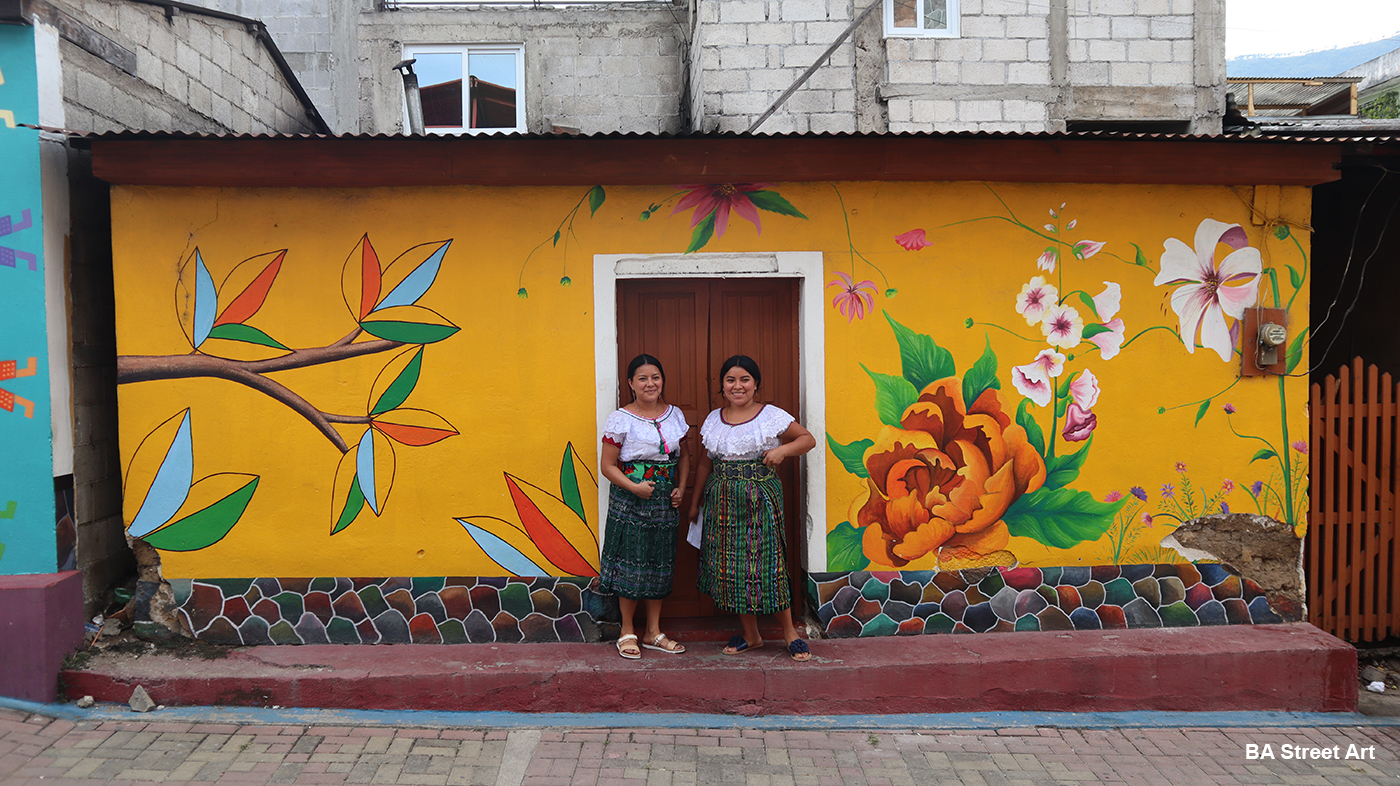 We visited local textile cooperative Asociación Kemo where their all-women team work together to design and produce textiles and clothes using traditional and natural methods that have been practiced for hundreds of years by Mayan communities. Ascelin from Asociación Kemo explained to us how they extract natural dyes from plants, seeds and tree bark. Interestingly, we were told that the moon can also alter the tones of different dyes from plants extracts. She also emphasised how they only use colours that occur naturally “and then return to the earth” unlike modern artificial dyes and chemicals that can cause environmental damage. 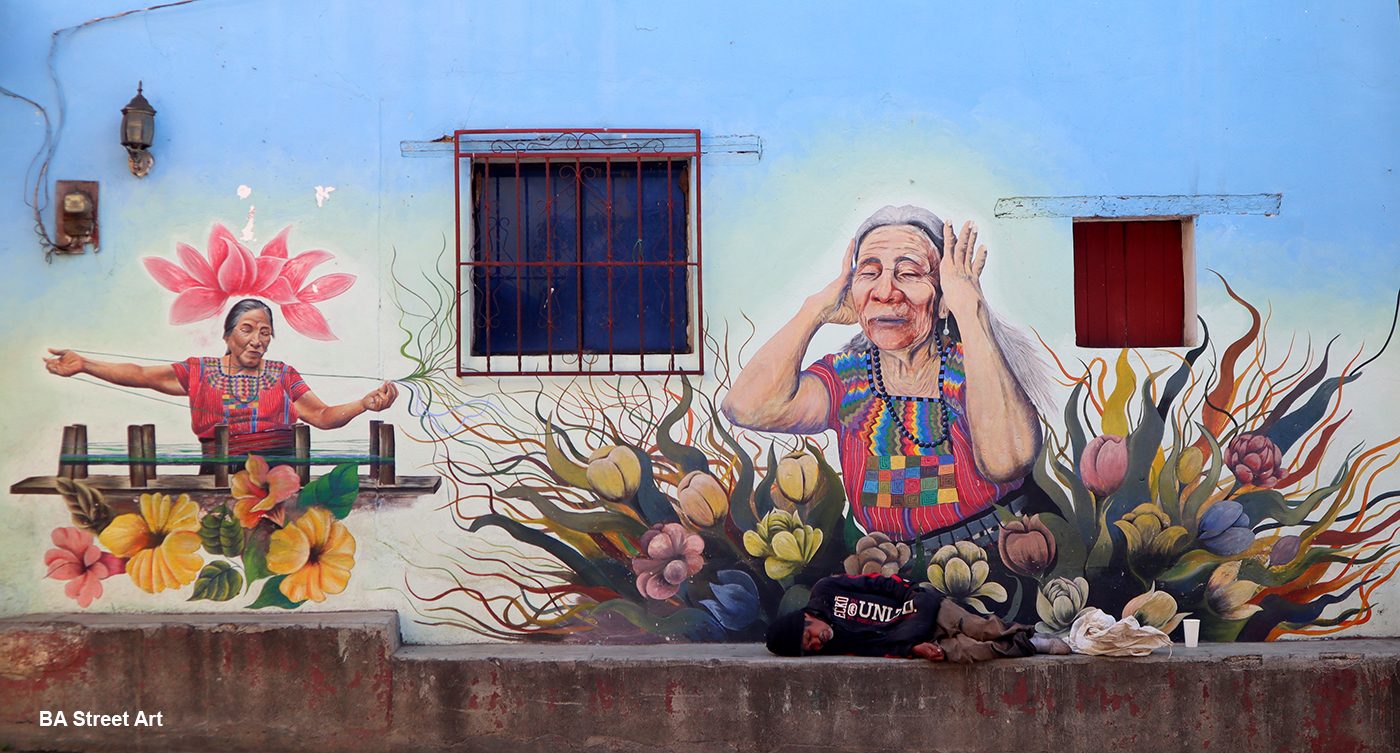 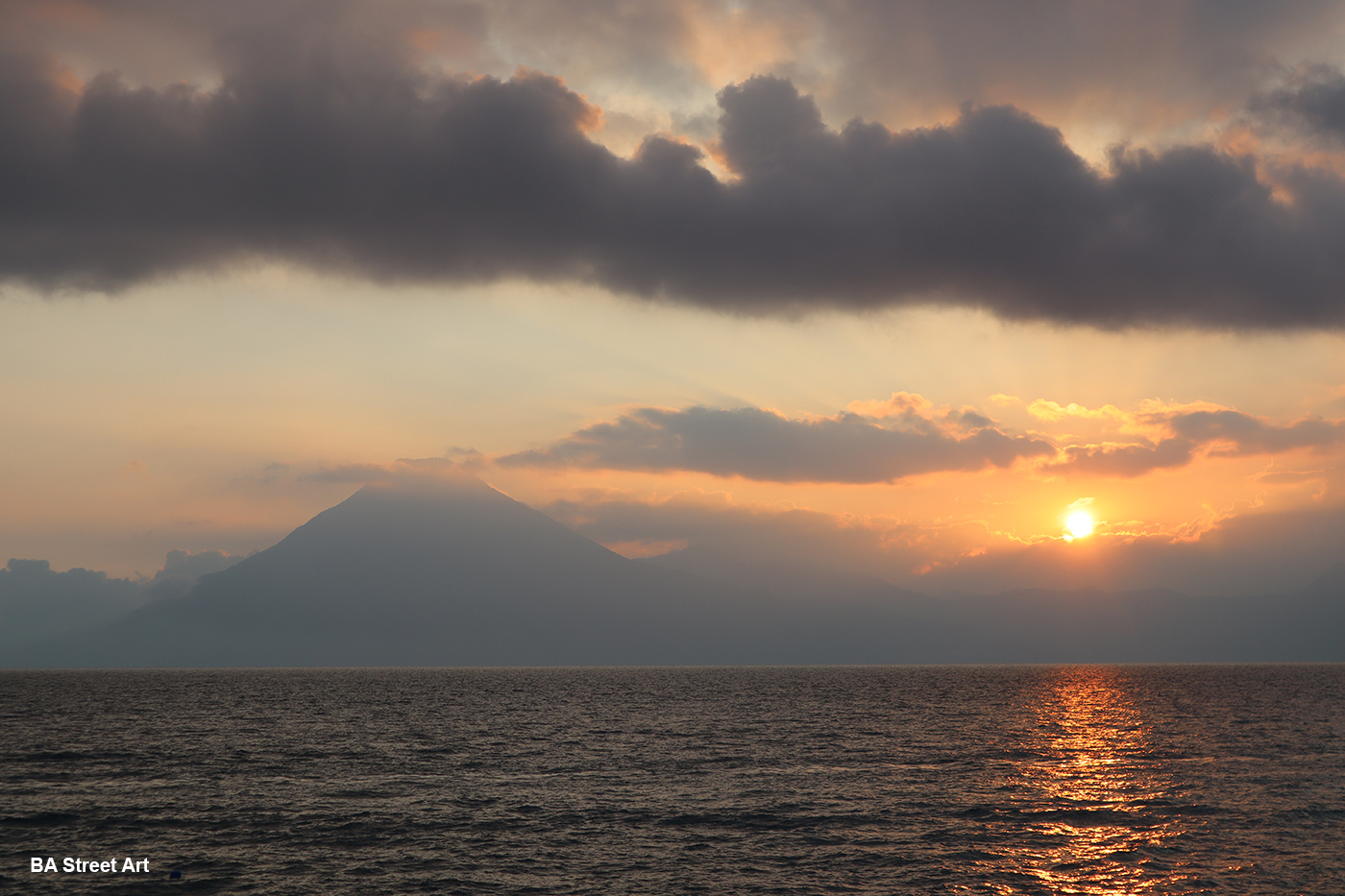 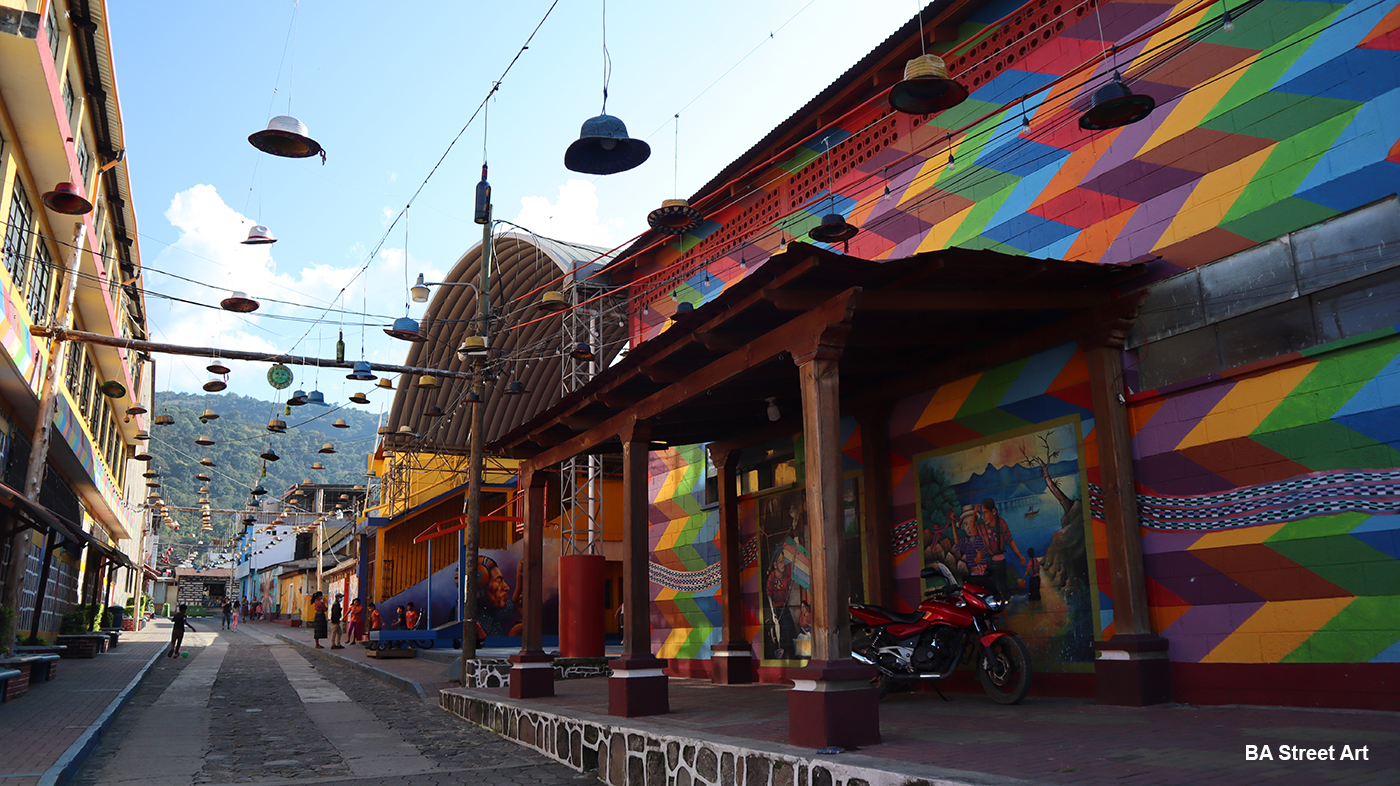 This covered space with basketball court was decorated with murals inside and outside by local artists in 2021. 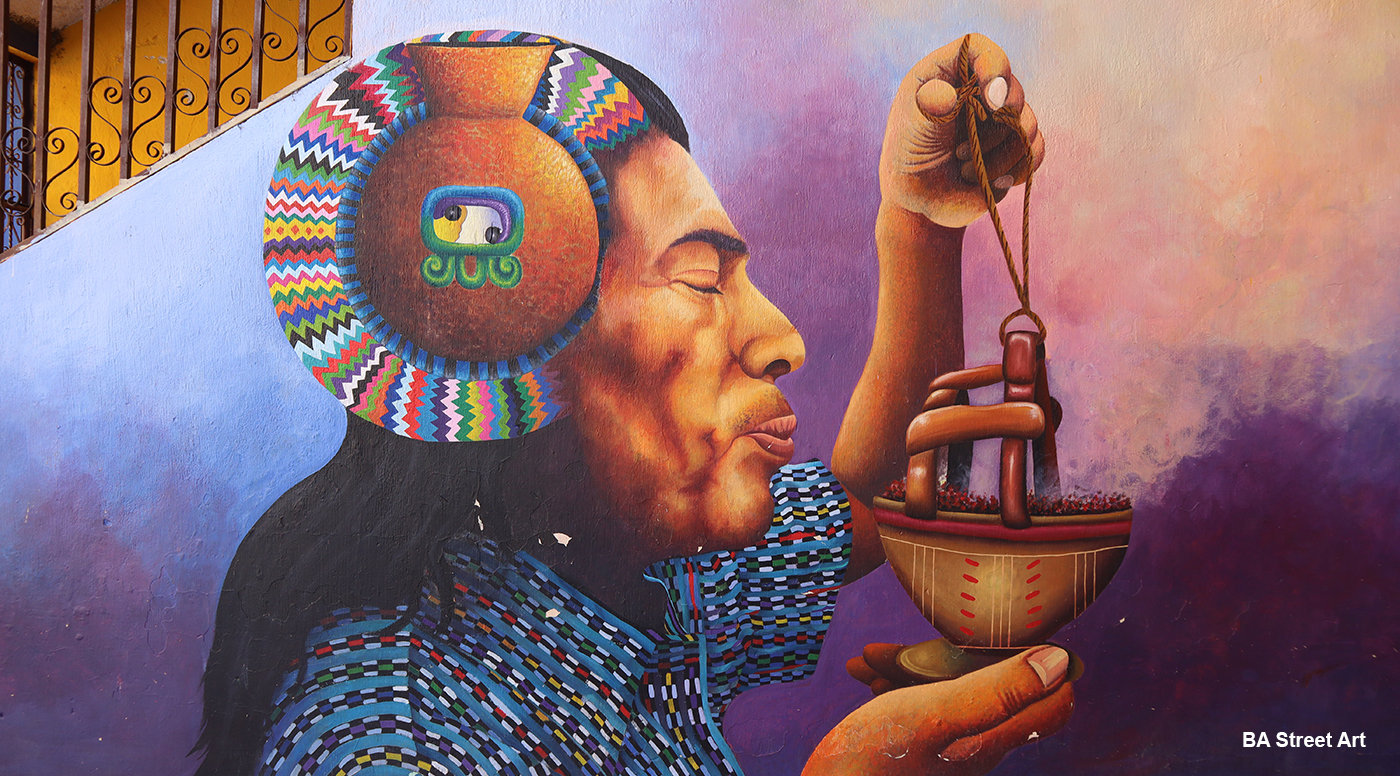 The pandemic has hit local artists hard with the lack of tourists visiting the village meaning it has been difficult to sell paintings. You can find numerous art galleries like Arte Maya Xocomeel on Calle Chi Nima Ya’ where we purchased a painting from local artist Antonio Vasquez Yojcom. One style of painting that is said to be original to San Juan La Laguna is ‘vista de pajaro’ or ‘bird’s eye view’ with local people in traditional dress seen from above carrying and cutting fruit. Another theme in several local art galleries features artworks with coloured corn. Panajachel is the largest town surrounding Lake Atitlán and is a popular destination with travelers as there are many hotels, guesthouses, souvenir shops and tour agencies there that make it a good base from which to visit other villages on the water. Souvenirs, however, are in general much cheaper in the central market in Guatemala City. 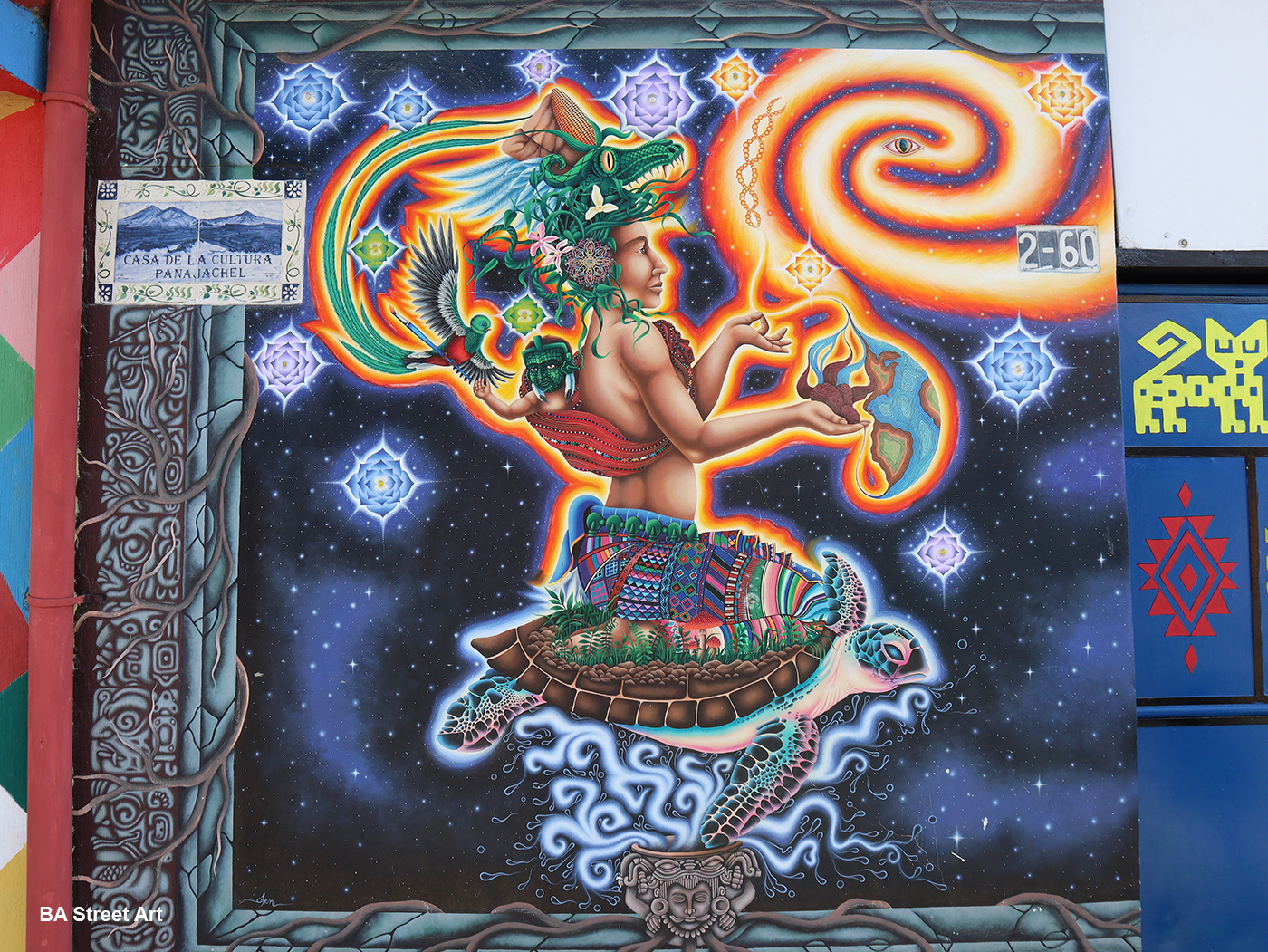 Santa Catarina Palopó is close to Panjachel and easily accessible by boat or tuk-tuk in about 10 minutes. The village hit the news in 2016 after a street art project to paint all the houses giving a striking panoramic landscape of bright yellows, greens, oranges, pinks and purples. 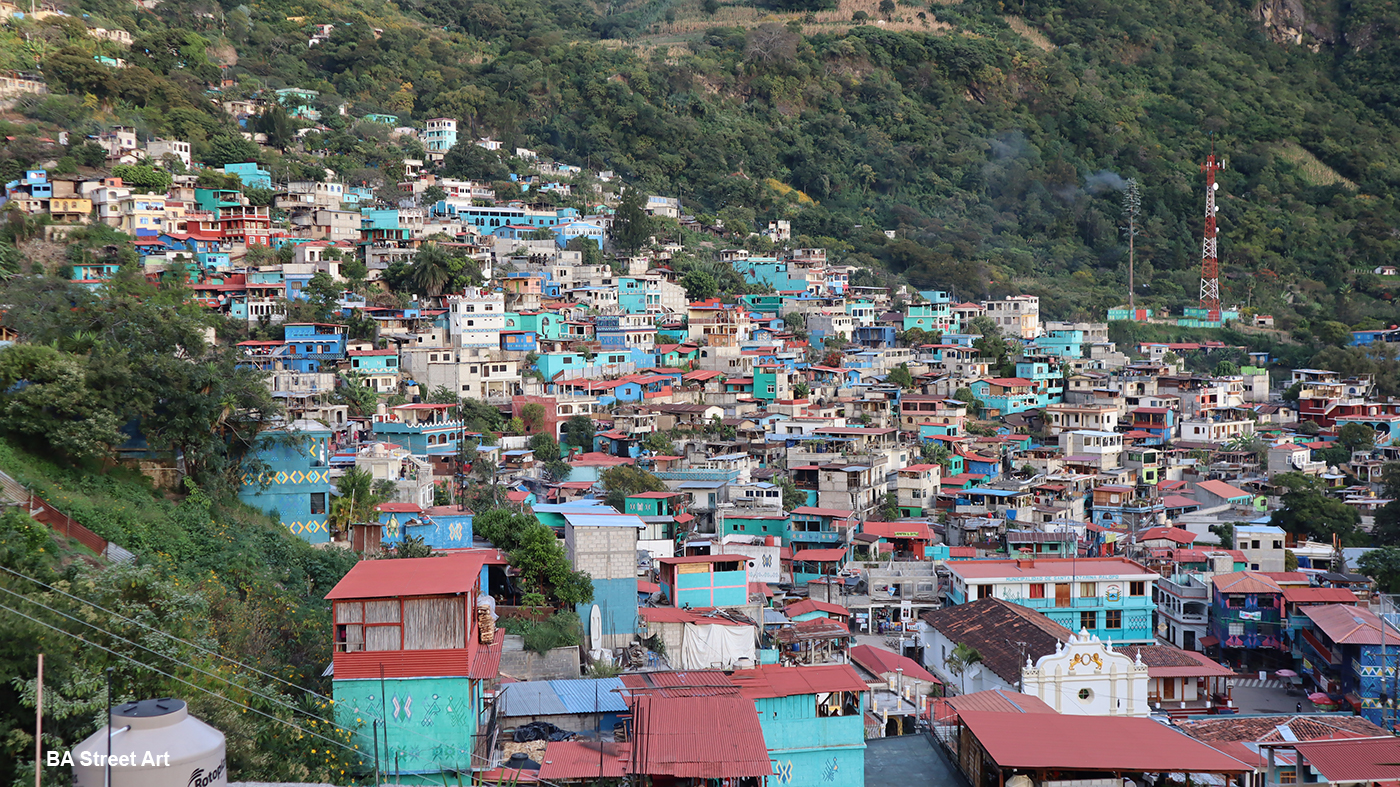 The villagers in Santa Catarina greet you with a warm smile but it was rather disappointing to go there to find that most of the houses had been repainted in different shades of blue and turquoise with indigenous motifs that you don’t see from afar. Without all the houses being painted harmoniously and with roofs that had either been painted red or were unpainted – the mural project named Pintando Santa Catarina has minimal visual impact. We were told that several home owners didn’t like the idea that their houses looked just like everyone else’s and that some local families felt they had lost their identities – so no longer wanted to participate in the project. In some streets in Santa Catarina, you can also see women keeping Mayan traditions alive as they knit scarves, blankets, rugs & tablecloths. We also visited a small one-room museum documenting through photographs how the village has changed through the years and were dressed in native clothing.

San Pedro La Laguna is a small village that is popular with backpackers, hikers and a younger crowd as a stop-over for excursions to climb the volcanoes and mountains around Lake Atitlán. You’ll come across a few murals if walking into the village from the jetty where boats stop from San Juan. And there are also some graffiti pieces when walking down some of the lanes off the main street. Tuk tuks or mototaxis are a common sight around San Pedro as a way of traveling between the villages and avoiding some steep climbs on foot.

If you enjoyed this post, please check out our blog post about the best murals to see in Guatemala City END_OF_DOCUMENT_TOKEN_TO_BE_REPLACED

Members of the DSR crew that formed in 1998 and friends got together to celebrate their 23th anniversary last month... END_OF_DOCUMENT_TOKEN_TO_BE_REPLACED

Berlin is regarded as one of the world’s street art capitals attracting international artists to decorate its walls over the...