Mexico City is a fantastic city to visit for its culture, art and museums. Its different neighbourhoods are also full of high quality murals with many reflecting the country’s rich history and heritage. Matt from Buenos Aires Street Art visited CDMX last month and took these photos.

Juarez is well know for its zona rosa or gay friendly district of streets with bars and cafes, its Korean community and large student population. 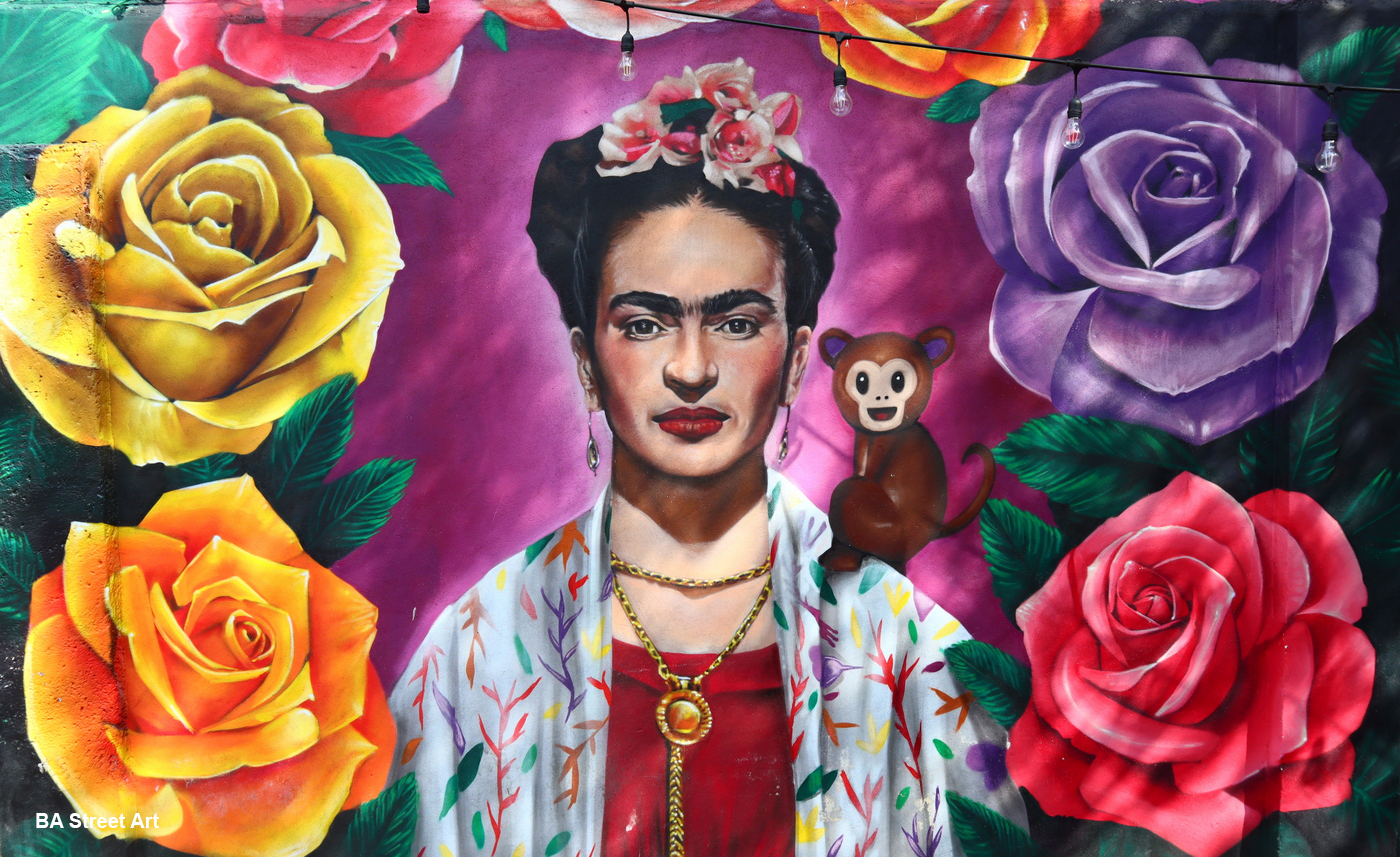 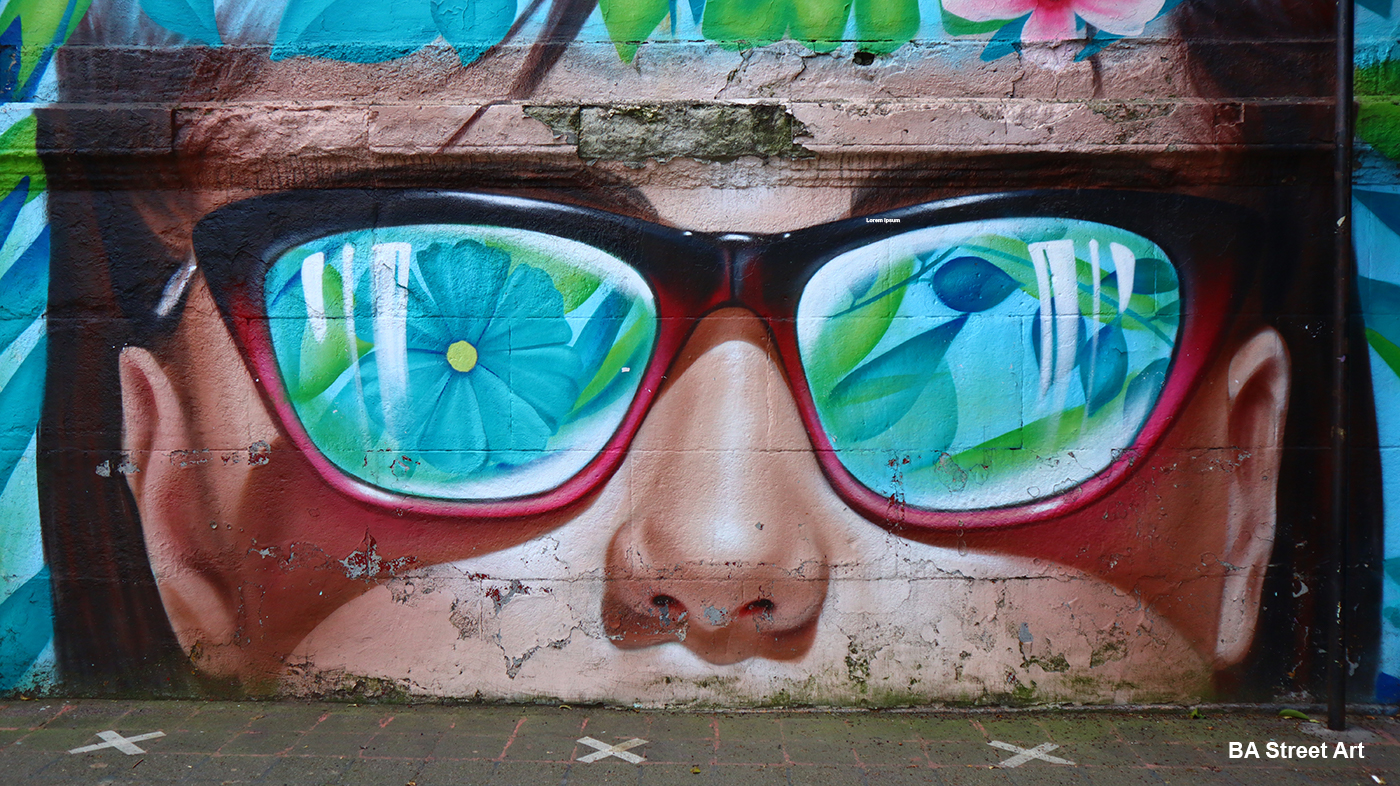 Mercado Juarez by Cuauhtémoc metro station is a popular spot with locals. The market sells fresh fruit and vegetables and has some great cafes inside selling delicious sandwiches and smoothies. 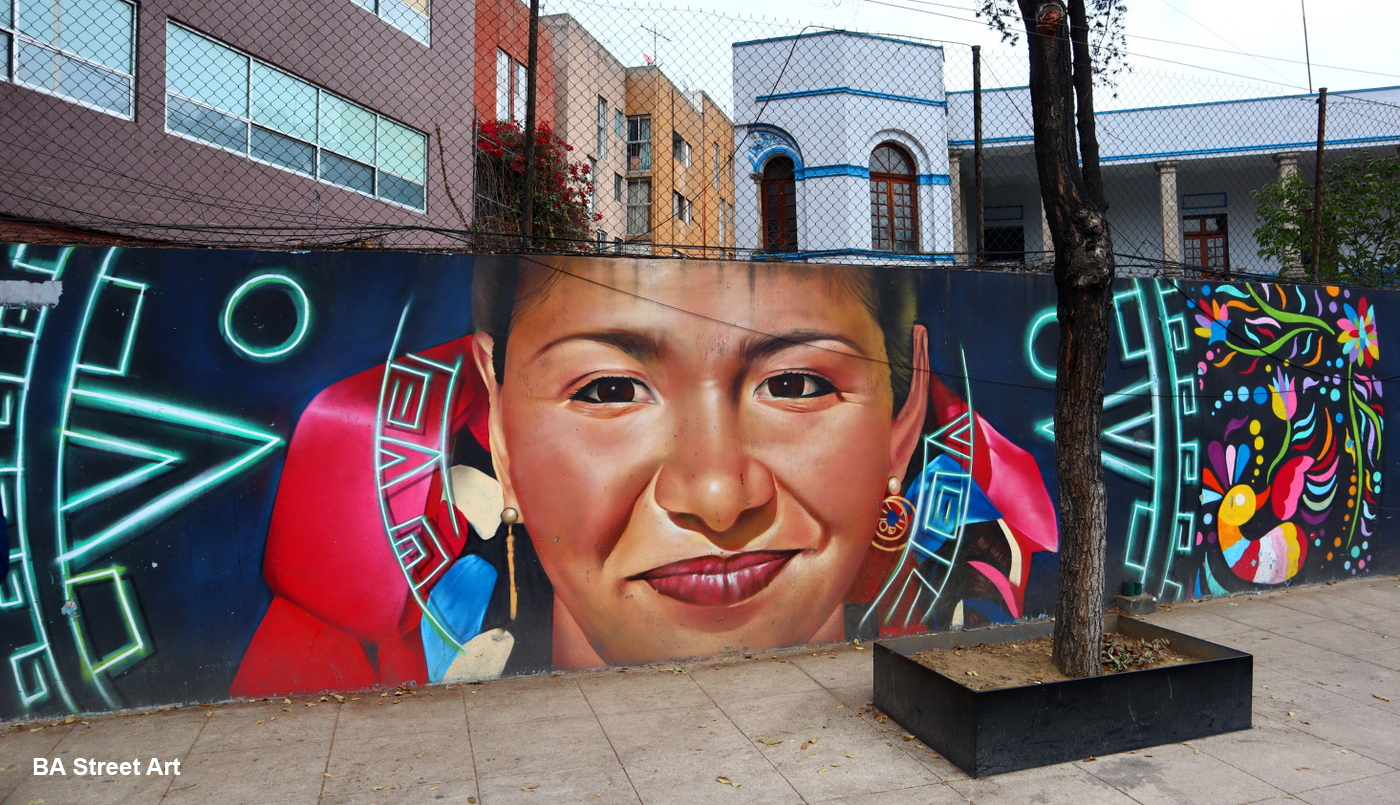 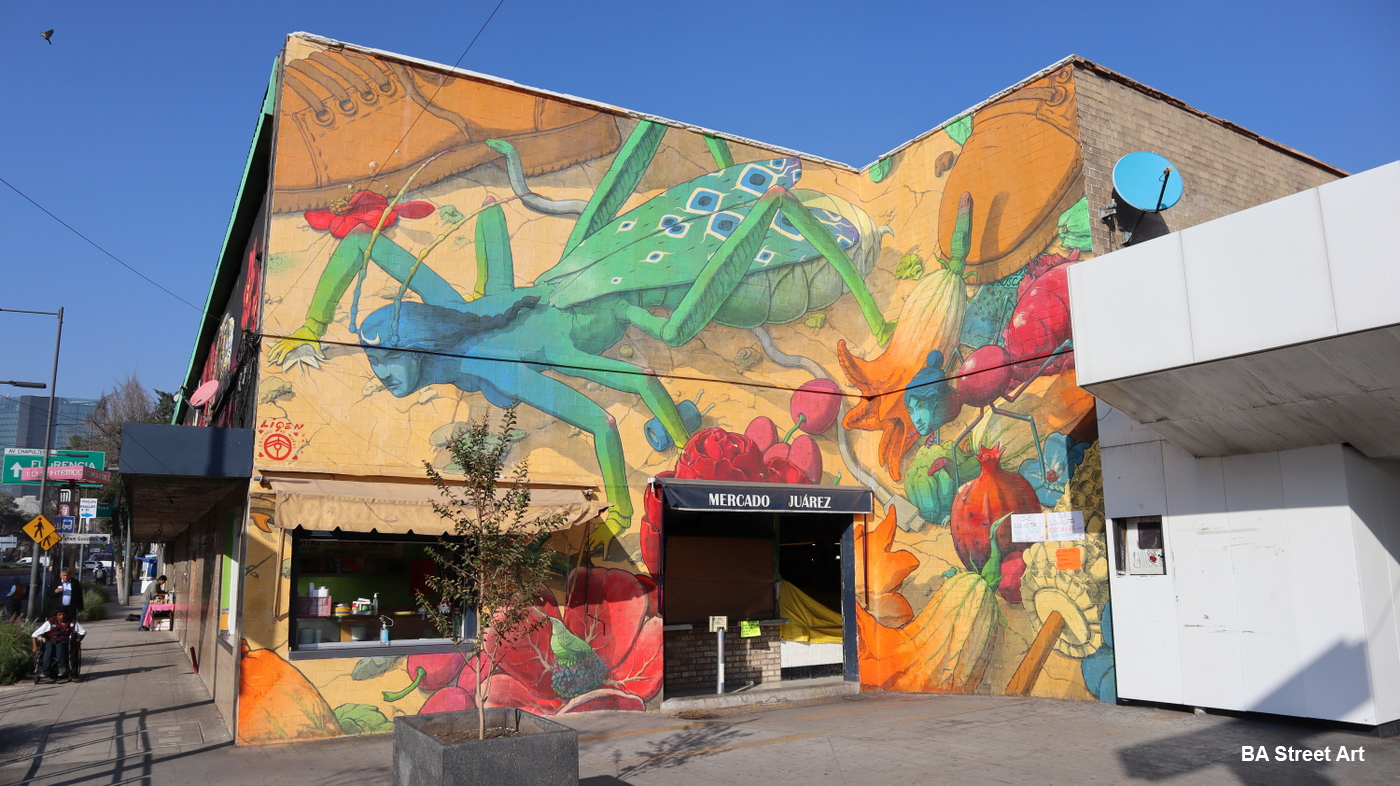 The market itself is also decorated with murals by Liquen and one by Mexican muralist Sego entitled ‘Woman in Dialogue with Progress’. 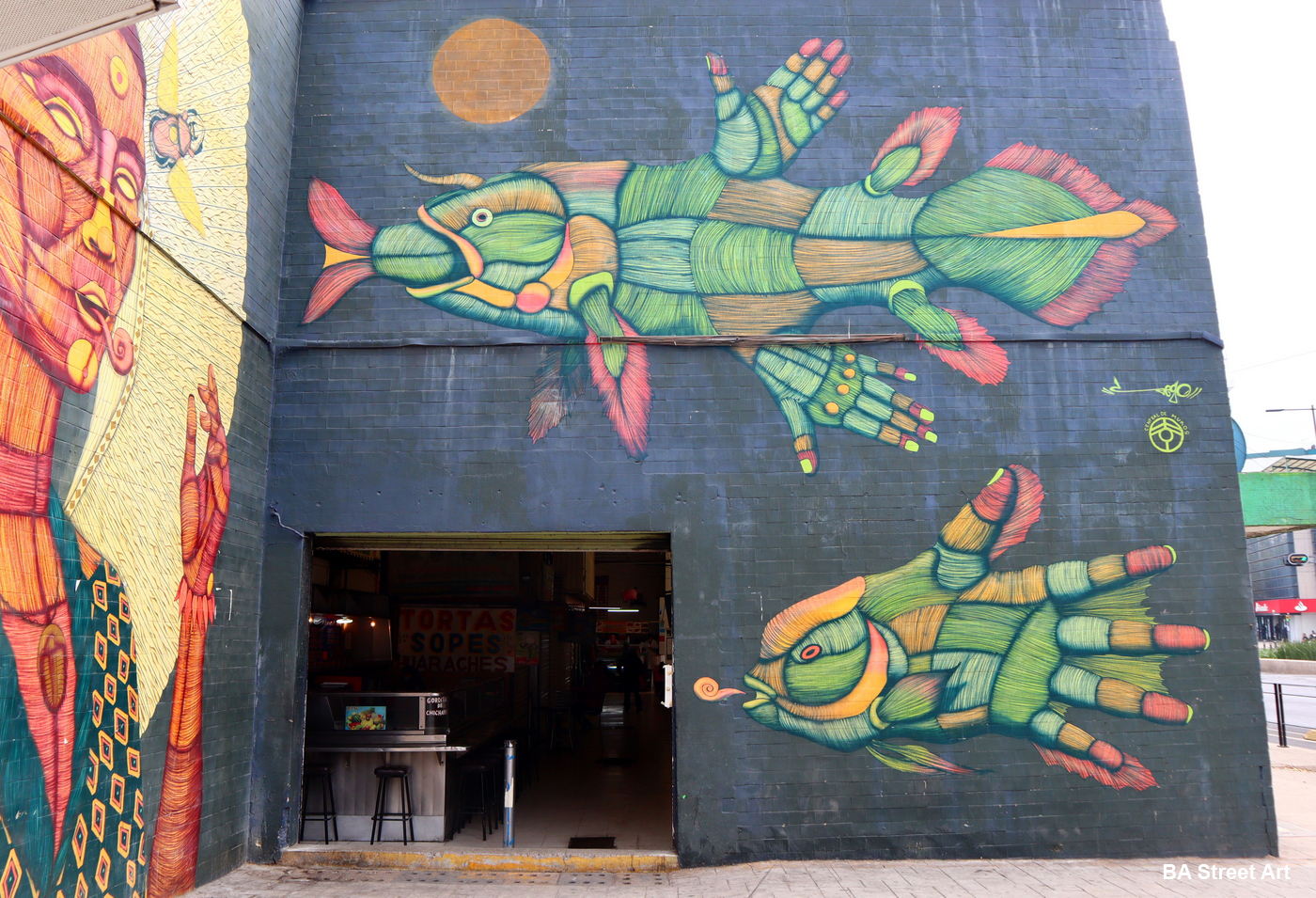 A number of shutters and doors along the streets in Barrio Juarez are painted with artworks.

Doctores is another great neighbourhood to check out street art with lots of murals located around the Museo del Juguete Antiguo México (MUJAM) and Hidalgo Market. The majority of these murals were sponsored and organised by Street Art MUJAM who hold an annual graffiti and street art festival to paint the nearby walls and buildings. 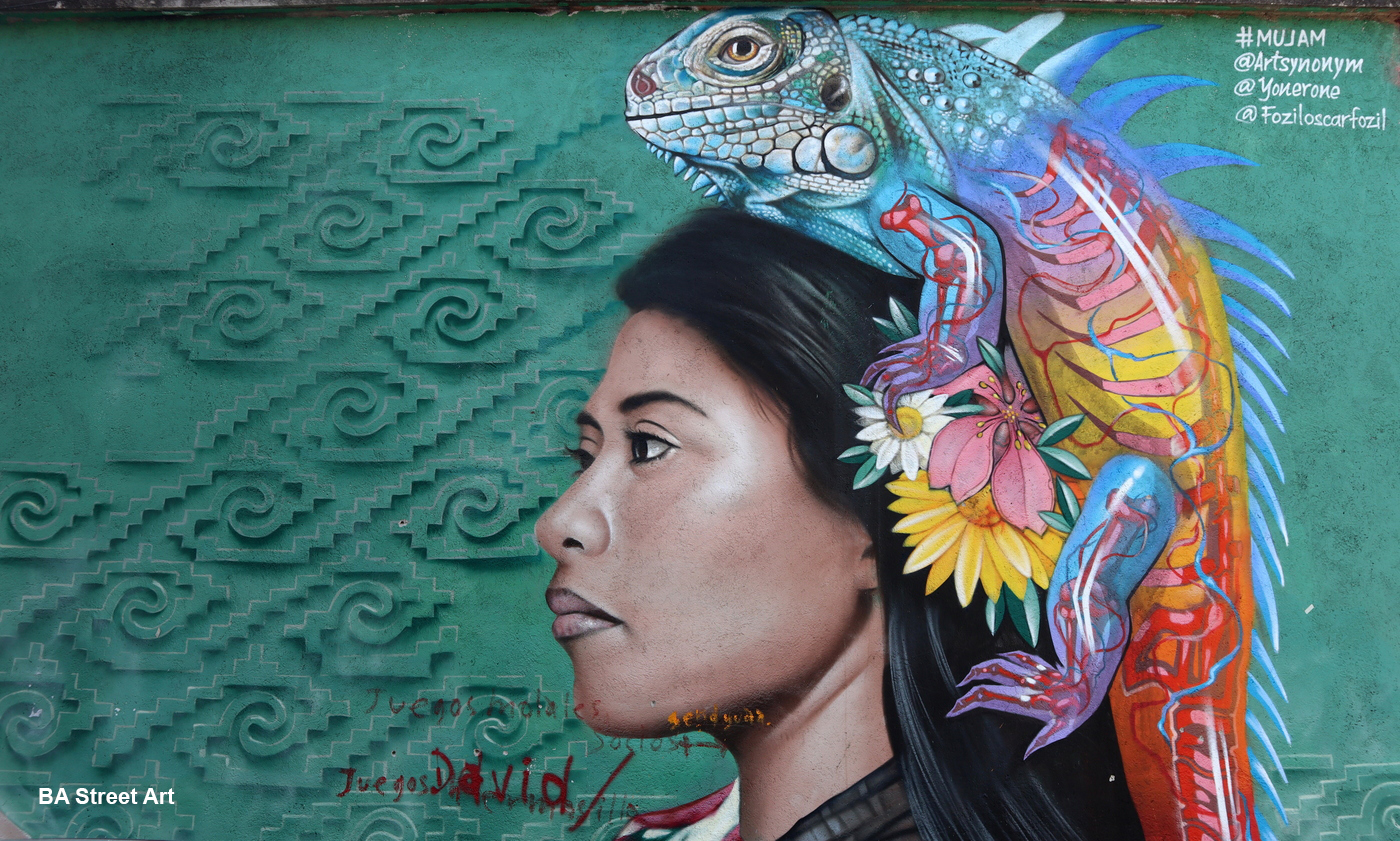 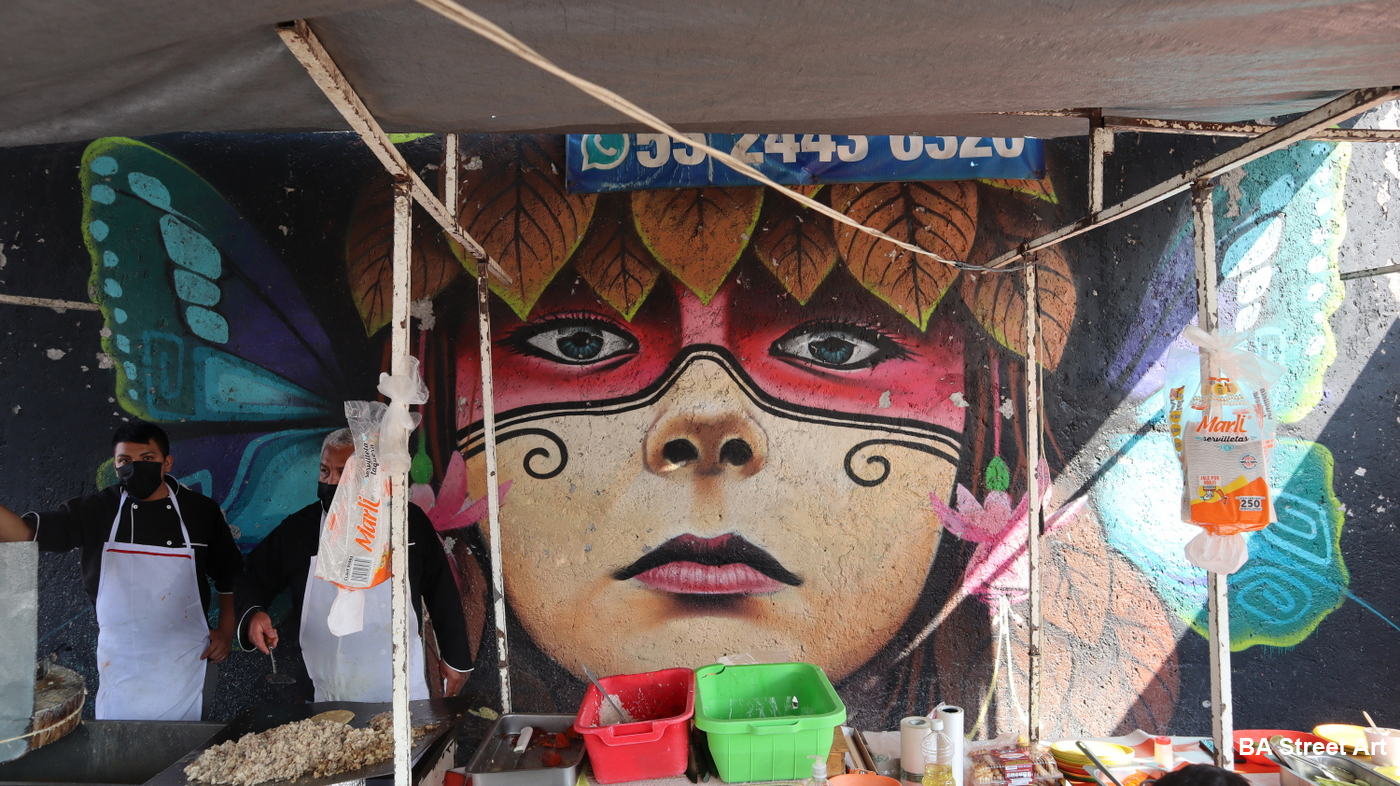 The antique toy museum in Doctores and its courtyard are covered with murals – including works by international street artists like Roa. The murals on the front of the museum and across the road from it were also curated by MUJAM. 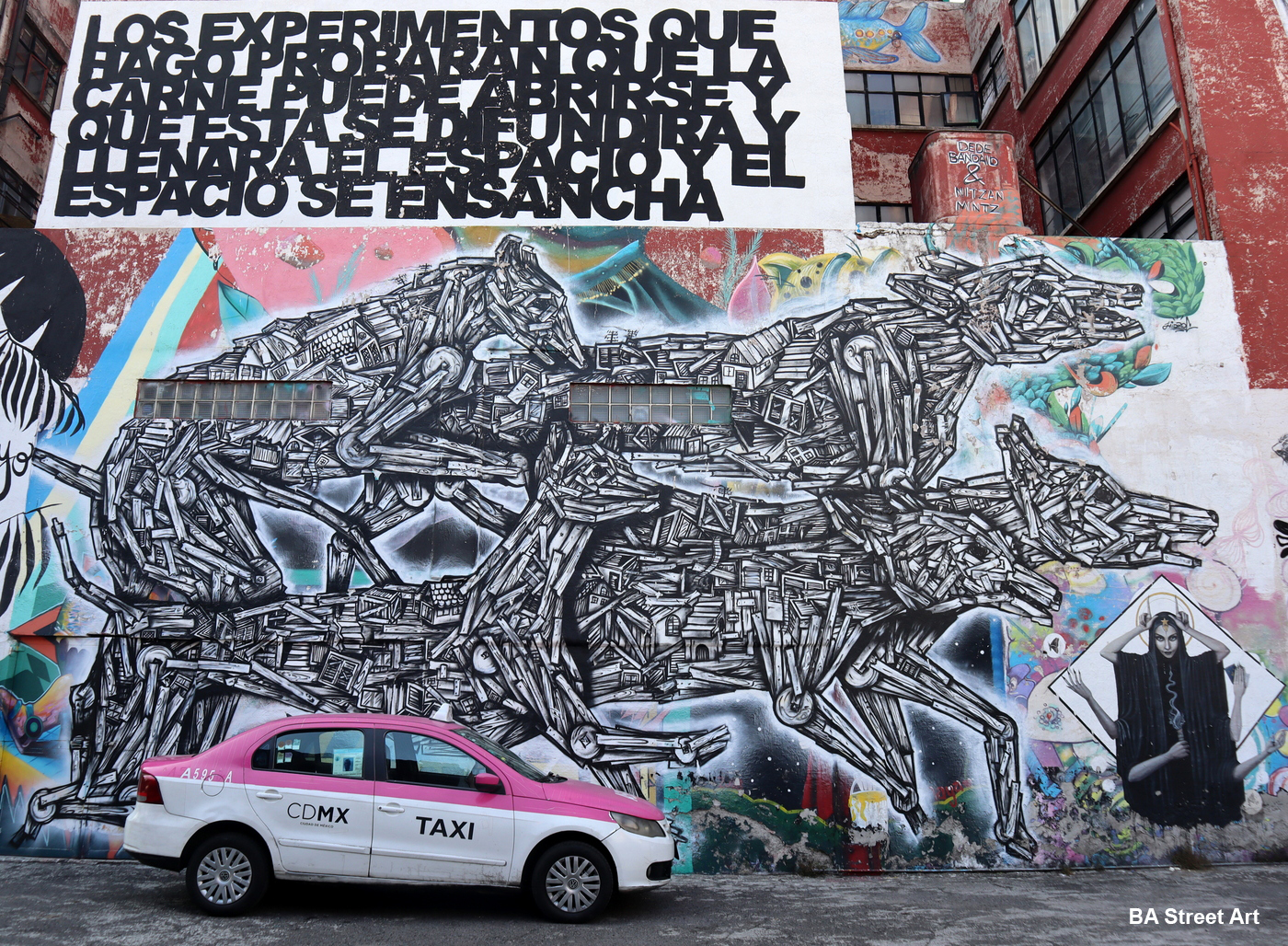 Was lucky enough to have Cynthia Arvide, friend, journalist and author of Mexico City street art book ‘Muros Somos’ take me on a private urban art tour around CDMX centre for a few hours. On Avenida Paseo de la Reforma are a number of large-scale murals including one by Adry de Rocio and Carlos Alberto GH on the facade of Hotel Fontán Reforma called ‘Tree of Life’. It features a catrina hugging flowers surrounded by butterflies, birds and animals. 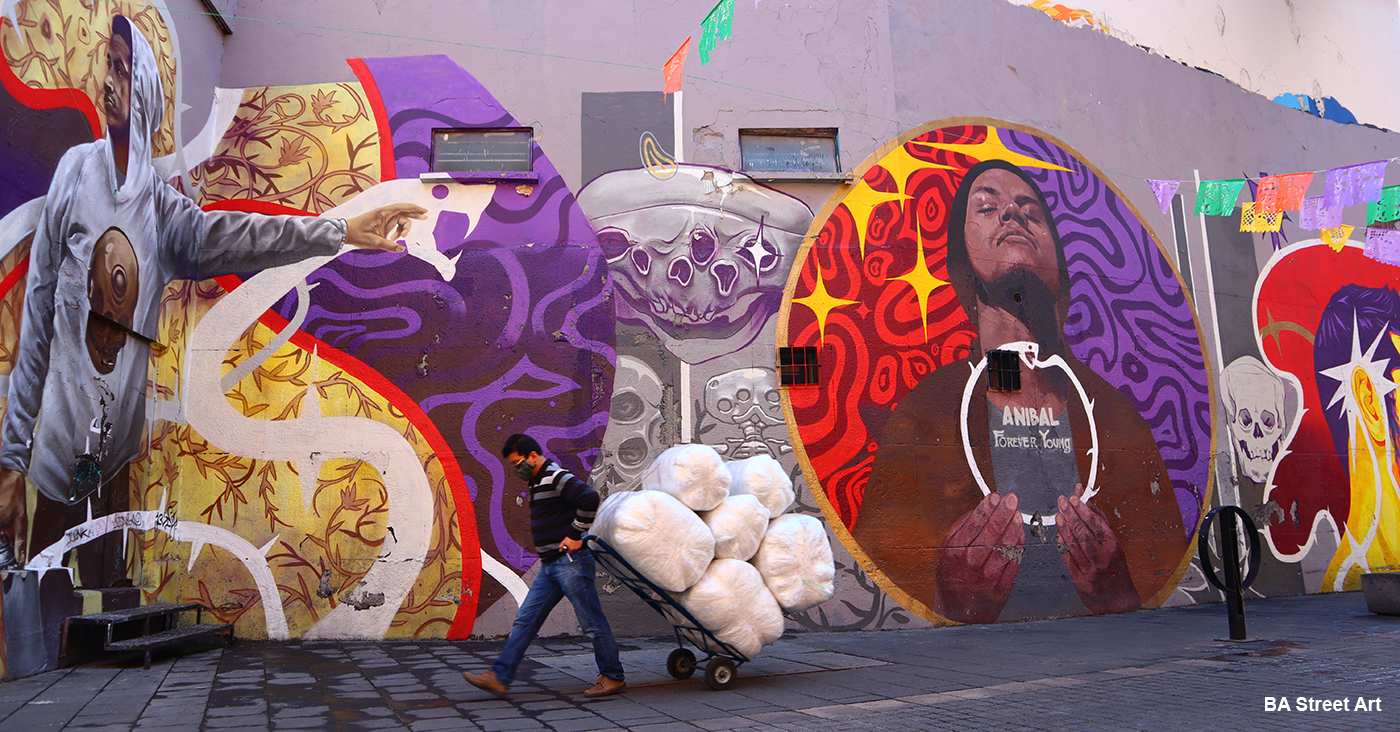 Cynthia told me this mural off calle Regina in the historic city centre with the dedication ‘Anibal Forever Young’ was a tribute to a young graffiti artist who died. 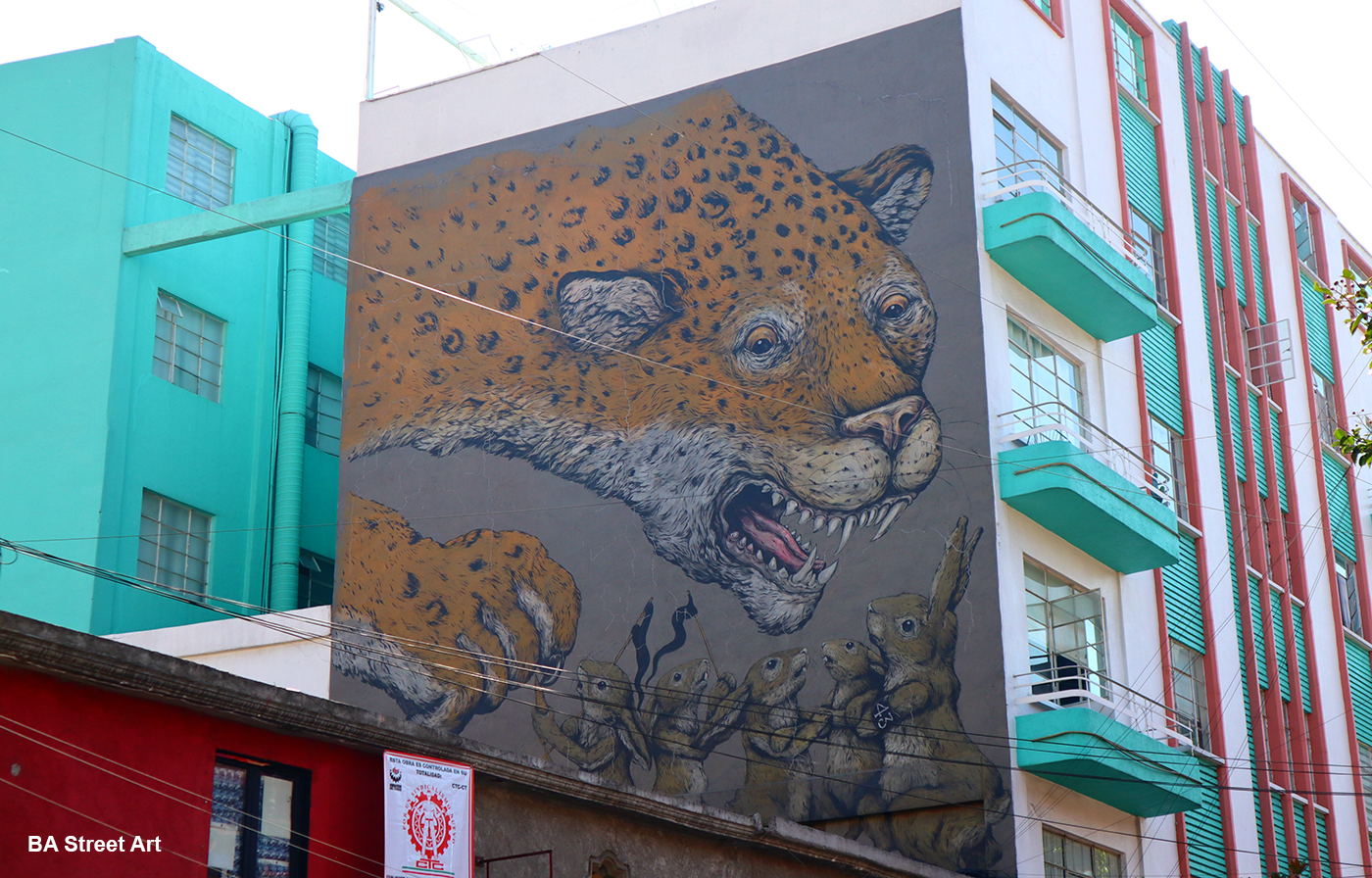 A number of street art festivals have been held around the historic city centre since 2012. This mural by Italian artist Erica Il Cane was painted in 2015 for Manifesto MX and has held up well. Another mural that was painted a few years back in 2016 and has survived remarkably well was painted by Mexican street artist Smithe One together with Spain’s Demsky. It’s entitled ‘Astronomy rules’ and can be found on calle 5 de Febrero. Mexico, with its rich history in muralismo mexicano, can boast a wide array of talented street artists. Cix Mugre is another artist who draws on indigenous influences and Mexico’s rich culture and history.

Colonia Roma is perhaps best known for its cafes and restaurants with the neighbourhood undergoing enormous gentrification in recent years. Hopefully, the architecture and the old buildings can be preserved with more new apartments and offices coming to the ‘barrio’. One of the most impressive murals in Roma Norte is by Mexican muralist Farid Rueda on this office building. The artist has become well known internationally in recent years for his colourful animal murals in cities such as Miami, Madrid, Amsterdam and Bucharest. Surprisingly, being based in Playa del Carmen, he has very few murals in CDMX. La Condesa is a leafy neighbourhood well known for its tree-lined streets. It has a European vibe with streets named after European capital cities like Amsterdam with fancy apartment buildings and bakeries. Parque España is a public park that is popular with dog walkers and young professionals with several buildings around it decorated with murals. Many murals can be seen around CDMX decorating tunnels, underpasses and the walls of highways. This mural by Mexican street artist Remix Uno was the first mural we saw in the city after arriving at Mexico City International Airport. 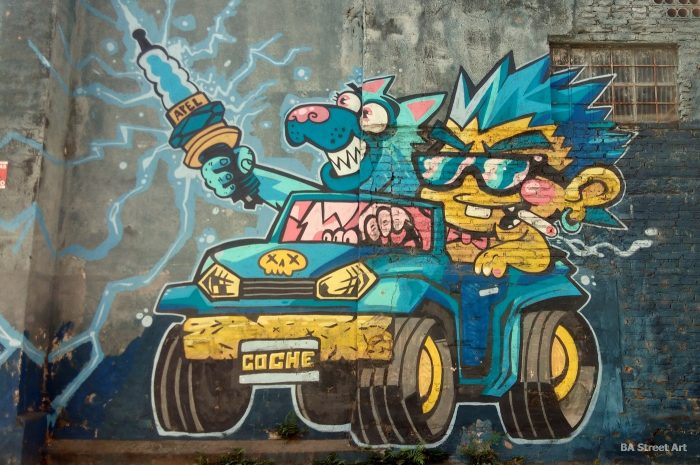 END_OF_DOCUMENT_TOKEN_TO_BE_REPLACED

Street artists in San Miguel de Tucuman in the north of Argentina have been brightening up the city by painting... 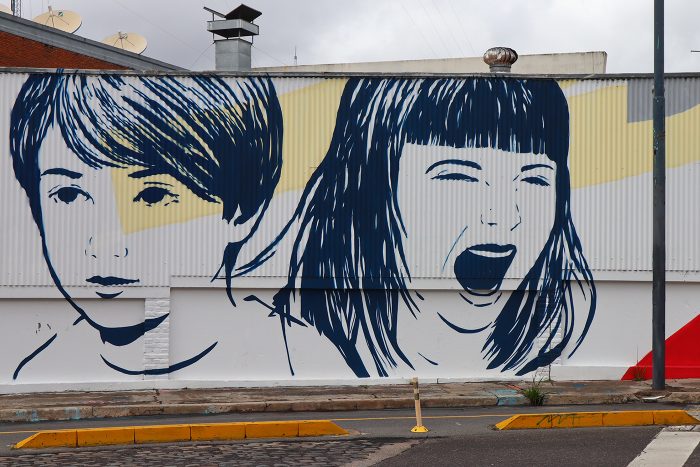