Here’s an amazing new artwork by Slinkachu. These are the first images from his forthcoming exhibition entitled “Concrete Ocean”. This piece called “Last Resort” was created in Wandsworth, South London, by the British artist who has become famous for his installations all over the city using minature trainset figures and graffiti on snails.

END_OF_DOCUMENT_TOKEN_TO_BE_REPLACED

How To Sell A Banksy,  is the title of a new film that follows two guys who try to sell an original artwork by Banksy that they’ve ripped down from a bridge in Old Street, East London.

Alper Cagatay and Christopher Thompson describe their movie as “a modern-day, true-story, crime-theft, comedy-caper.” They say it’s about: “Going up against the Art Establishment, Critics, Auction Houses, Gallery Owners and Authentication Boards in a quest for the elusive meal ticket, two filmmakers unwittingly gatecrash the murky and protective world of Banksy.” Check out the trailer here:

Judging by the movie clips, had the filmmakers done their research properly they would have known that Banksy doesn’t authenticate street art pieces as he wants them to remain in situ. Another firm called Vermin, set up without Banksy’s approval, offers to verify if streetworks are genuine but despite their “professional opinion”, many pieces still fail to sell at auction as they haven’t been officially authenticated by the artist. The movie begs the question was it worth making?, Like the cheap copies of Banksy’s designs you can buy for £6 in London’s Spitalfields Market, is this just yet more people trying to cash in on Banksy’s fame? What do you think about the trailer?

With no hills, Buenos Aires should be a city well suited to travelling by bicycle you might think. But with its notorious traffic congestion, maniac motorists and total disregard for the highway code, it’s bad enough for car drivers let alone cyclists as anyone who has sat in a traffic jam during rush hour will testify. Add to that the pollution, particularly in the summer, with clouds of smoke bellowing from old buses, lorries and fletes (removal vans).

END_OF_DOCUMENT_TOKEN_TO_BE_REPLACED

Thanks to Esteban Grinberg for sending in these terrific photos from Constitución and Congreso in Buenos Aires. The first two images were painted in a square close to the motorway 9 de Julio and not far from Plaza Constitución. They form part of a giant mural painted by Gualicho, Ever, Run Dont Walk, Stencil Land and Jaz.

If you’ve taken any great photos of Buenos Aires street art, please email them to us at buenosairesstreetart@gmail.com with your name, address, and the location of where the photo was taken and we can then publish them on the website. The winner of the best photo chosen by me that is received between now and midnight on February 28 will win a free copy of Textura Dos. Buena suerte!

A £25,000 sculpture that stands outside the stadium of Oxford United has been sprayed in bright pink paint. The bronze artwork of a bull – the emblem of the English football club – was defaced over the weekend with the words “Gotta love art” and “RIP” emblazoned over its marble plinth. 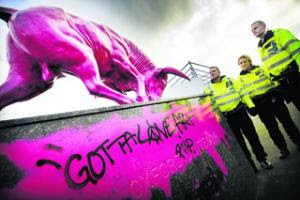 The statue was paid for by three firms and was unveiled in 2008 after three years of planning. 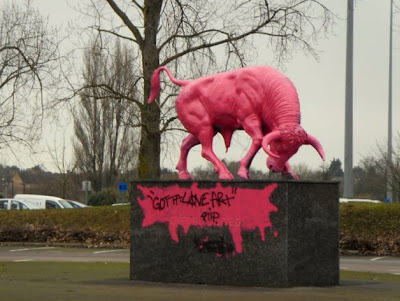 Mariano Ferreyra political stencil graffiti is all over Buenos Aires and are particularly common around Plaza de Mayo and along Avenida de Mayo where you can find an abundance of political graffiti. END_OF_DOCUMENT_TOKEN_TO_BE_REPLACED