Boasting large-scale murals by some of the best-known international street artists and home to some remarkable local talent, Lisbon can claim to be the street art capital of the world, says Buenos Aires Street Art‘s Matt Fox-Tucker. 1. Hyper-realistic mural by Mr Dheo and Pariz One

The last time I visited Lisbon was in 2012, Portugal was in the throws of an economic crisis following a 78 million euros bailout the previous year. Old buildings were falling down, shops were boarded up and some neighbourhoods felt like ghettos. I returned to Lisbon again last month and was amazed at its transformation. Buoyed by a thriving tourism industry, Portugal’s economy is now on the way up. And Lisbon’s street art scene – propelled by a new generation of home-grown artists and with many mural projects supported by the city government – is booming too. Here’s my round-up of some of the best murals in the city I photographed over two and a half days and where to find them.

2. Collaboration between Telmo Miel and Pariz One

This collaboration between Dutch muralists Telmo Miel together with Pariz One was painted during MURO Street Art Festival 2016 in Bairro Padre Cruz. It’s entitled ‘Two of One Kind’. 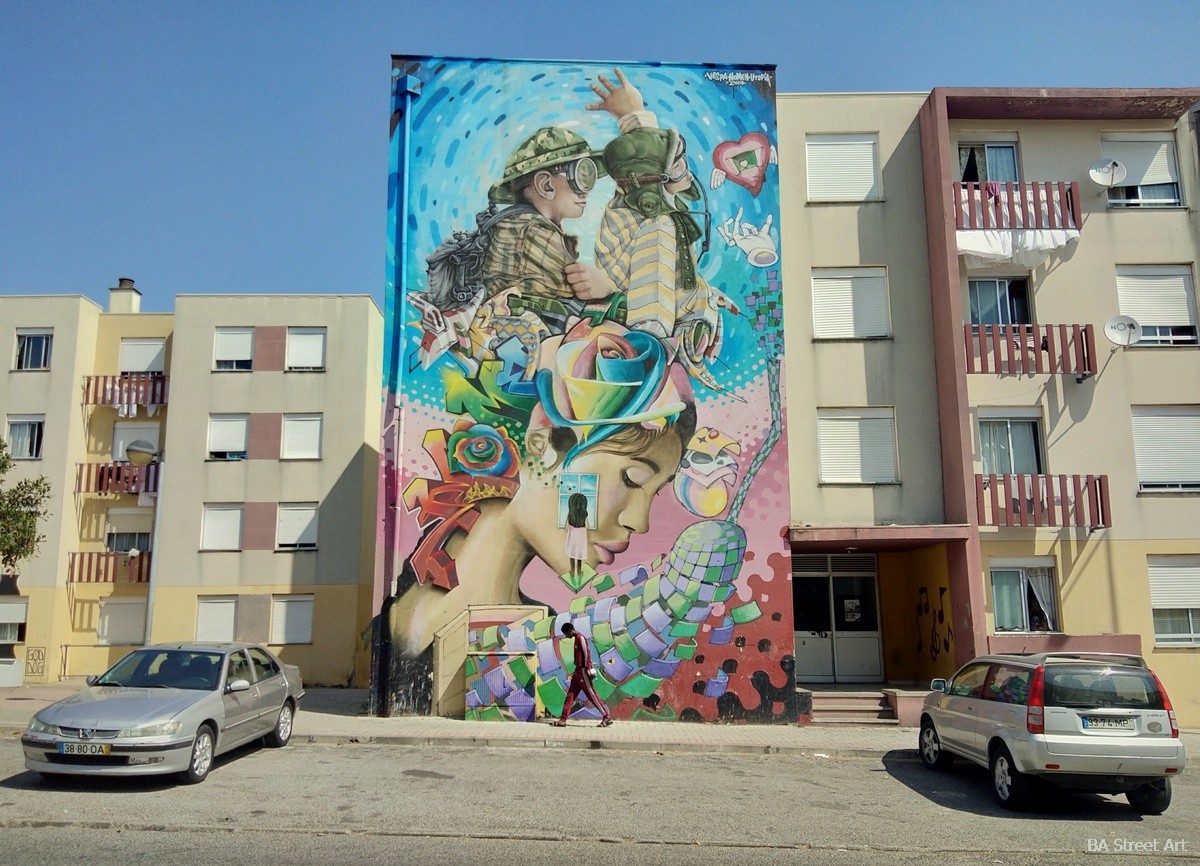 Smile is another talented Portuguese street artist who specialises in hyper-realistic artworks and painted this giraffe in 2014 in Sacavém. 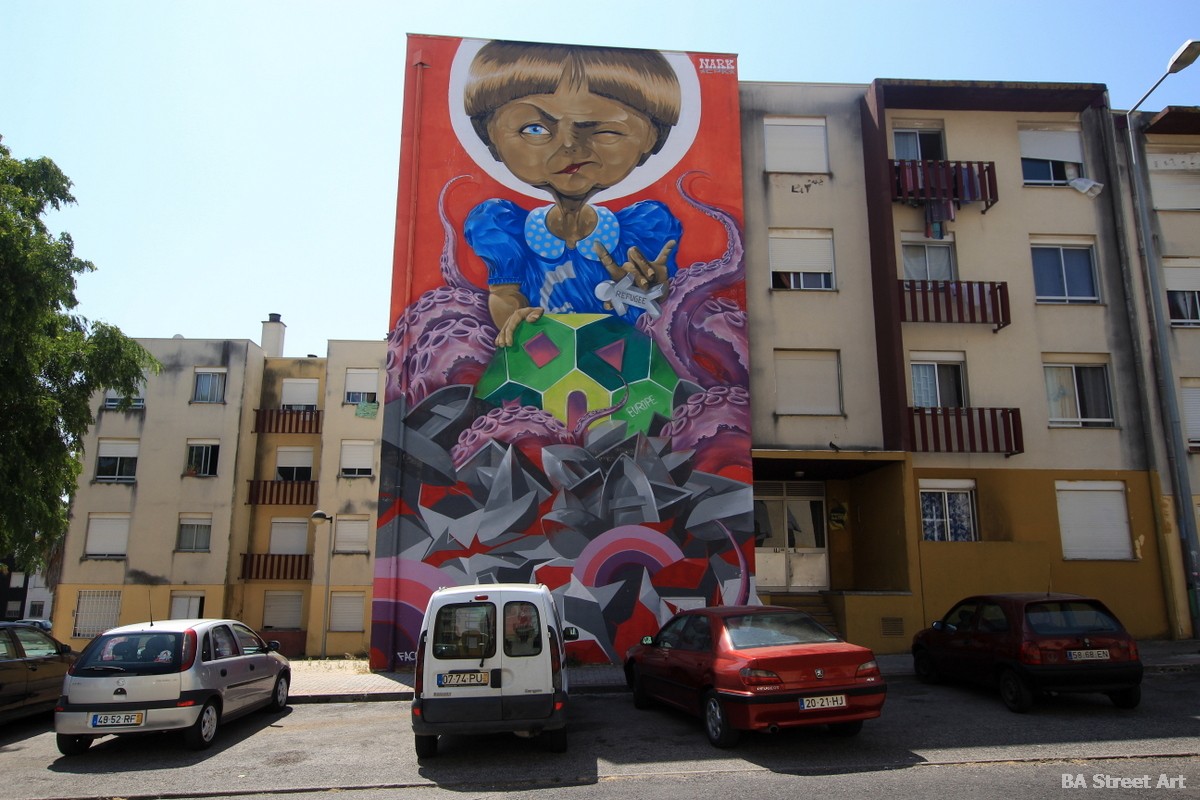 This portrait of Angel Merkel painted by Nark in 2015 is talking about the European refugee crisis with the German chancellor pulling the strings. 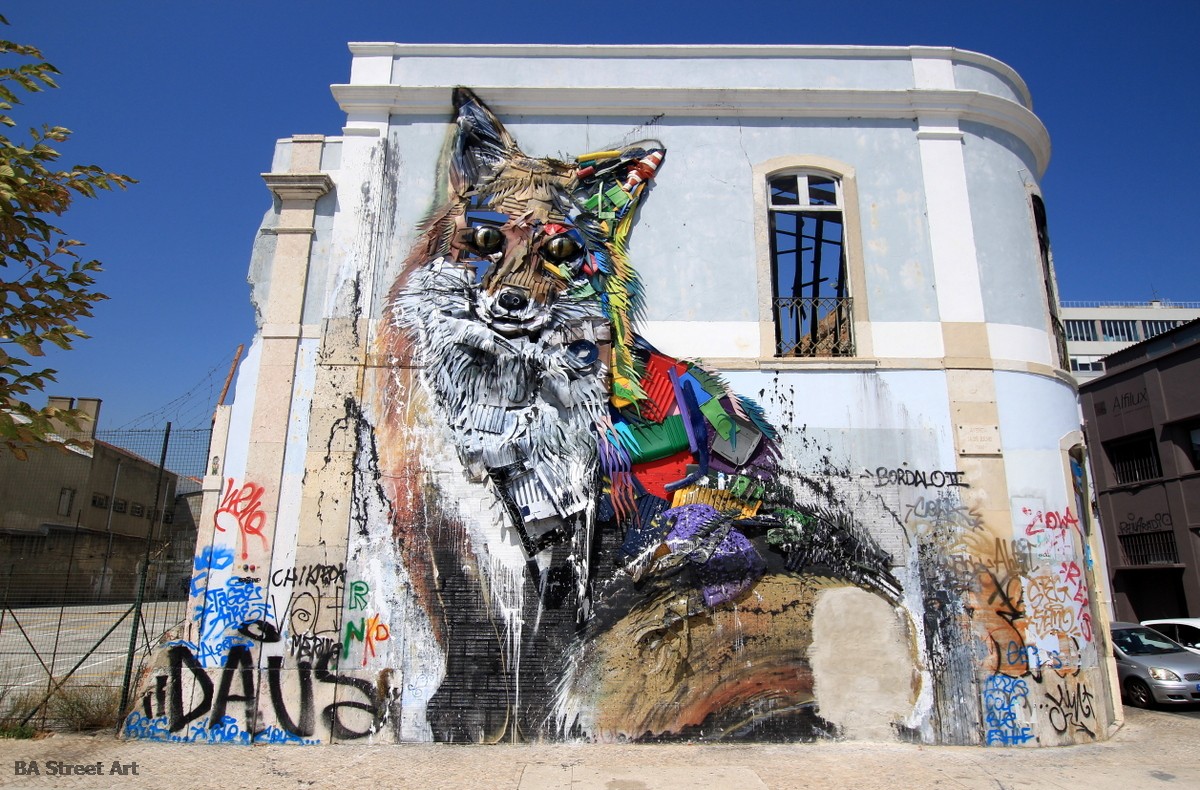 Bordalo II is best known for creating eye-popping animals out of trash on walls around the city. Animals like this fox are made from painted car bumpers, tyres, garbage cans, computer parts and waste material. This work was created in relation to a gallery show in November 2017 featuring works by the artist.

The Portuguese artist says his motivation is to draw attention to the environmental damage and pollution caused by waste and materials that are thrown away rather than being reused or recycled.

One of his largest artworks in his series of ‘Big Trash Animals’ is this racoon that can be found by Centro Cultural de Belém on calle Bartolomeu Dias. LX Factory is a great spot to check out street art with some cool interventions by different street artists. This giant bee by Bordalo II can be found on the side of The Dorm – Hostel LX Factory. Bordalo II created this installation with a school of fish swimming along a wall on Avenida de Ceuta across from the Alcântara-Terra train station. Portuguese artist Vhils uses a hammer drill, chisels and other tools and to create amazing relief carvings on walls. Vhils painted this portrait of an anonymous old man on the of an abandoned building close to the Santo Amaro Docks in 2014. Unfortunately the wall was destroyed in October 2018.

12. Vhils and Shepherd Fairey in Graça

Vhils teamed up with U.S. artist Shepard Fairey for this collaboration featuring the face of a woman along Rua Senhora da Glória in the neighbourhoods of Graça. This mural was organised by Underdogs Gallery in conjunction with a show at their exhibition space. 13. Zeca Afonso by Odeith in Amadora

Odeith is another incredibly talented Portuguese artist. Best known for his eye-popping 3-D pieces and ‘anamorphic art’ with animals bursting out of corners of abandoned buildings.

In Amadora, Odeith has also painted a series of murals dedicated to Fado legends such as Fernando Pessoa, singer and activist Zeca Afonso, guitarist Carlos Paredes and singer Amália Rodrigues. These murals by Odeith were sponsored by the Amadora Council and can be found near Amadora-Este subway station. Mural by Mr Dheo and Pariz One (Armuyama Collective) entitled ‘When you close your eyes and nothing matters’, on Rua do Conde de Redondo. Anyone trying to quit smoking should check out this mural by Portuguese artist Mário Belém painted in 2017 that can be found in the neighbourhood of Santa Apolónia. It features a smoking skeleton holding a hangman’s noose and a dying plant. The mural in fact commemorates 150 years since the abolition of the death penalty in Portugal in 1867. 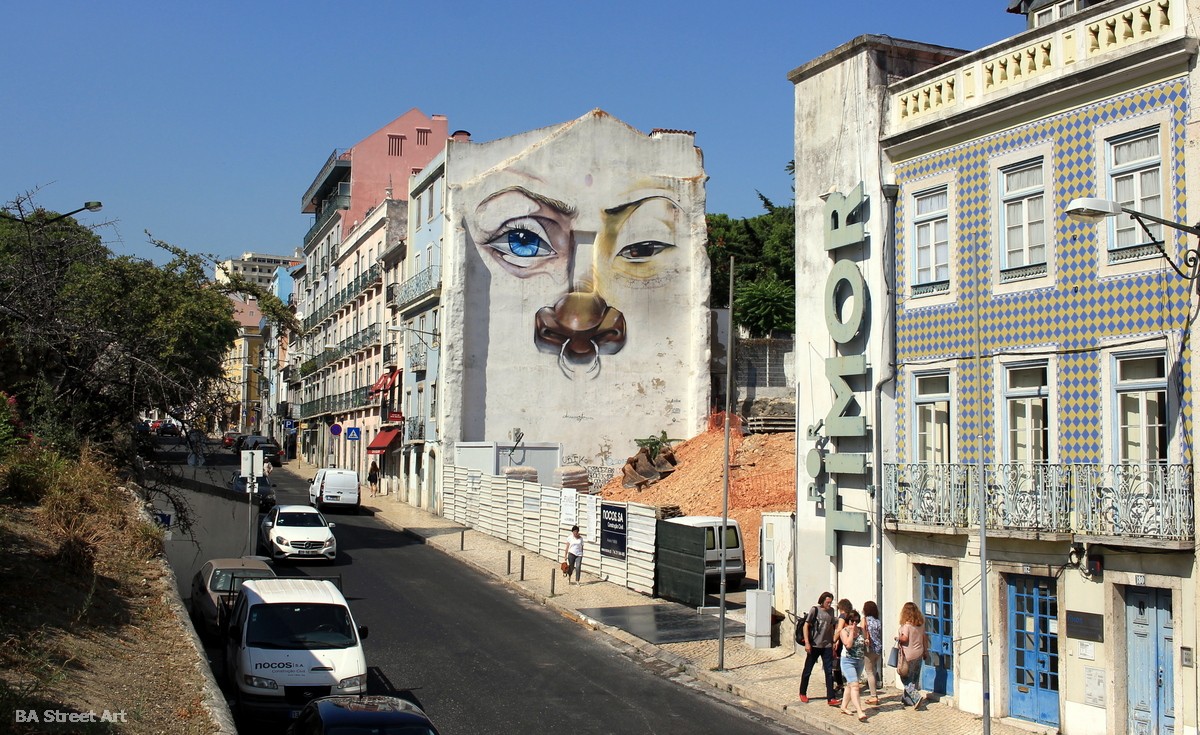 Portuguese artist ‘Drawing Jesus’ painted this haunting face with a nose ring in 2014 with help from GAU. This artwork can be found close to Palacio de São Bento and seen from the tram on route 28. This mural by akaCorleone and Dutch artist Hedof was commissioned by KLM to commemorate 75 years of regular flights between Lisbon and Amsterdam. It’s located on Rua Damasceno Monteiro, not far from the viewpoint at Nossa Senhora do Monte. 20. Blu and Os Gemeos next to Picaos metro station

Italian street artist Blu and Brazilian twins Os Gemeos joined forces in 2011 to produce a stunning mural for the Crono project. It hits out at petrol companies depicting an oil baron sucking natural resources of the earth through a straw. The mural covers a three-storey building located on Avenida Fontes Pereira de Melo.

Shepard Fairey, who is best known for his famous Barack Obama “Hope” poster and his Obey Giant brand, painted this mural in 2017 in Graça depicting a woman wearing a beret holding a Kaslashnikov with a flower in its barrel. In April 2018, Spanish duo Pichiavo were invited by Underdogs Gallery to paint this giant mural in Santa Apolónia. The pair from Valencia combine graffiti and classical art to stunning effect. 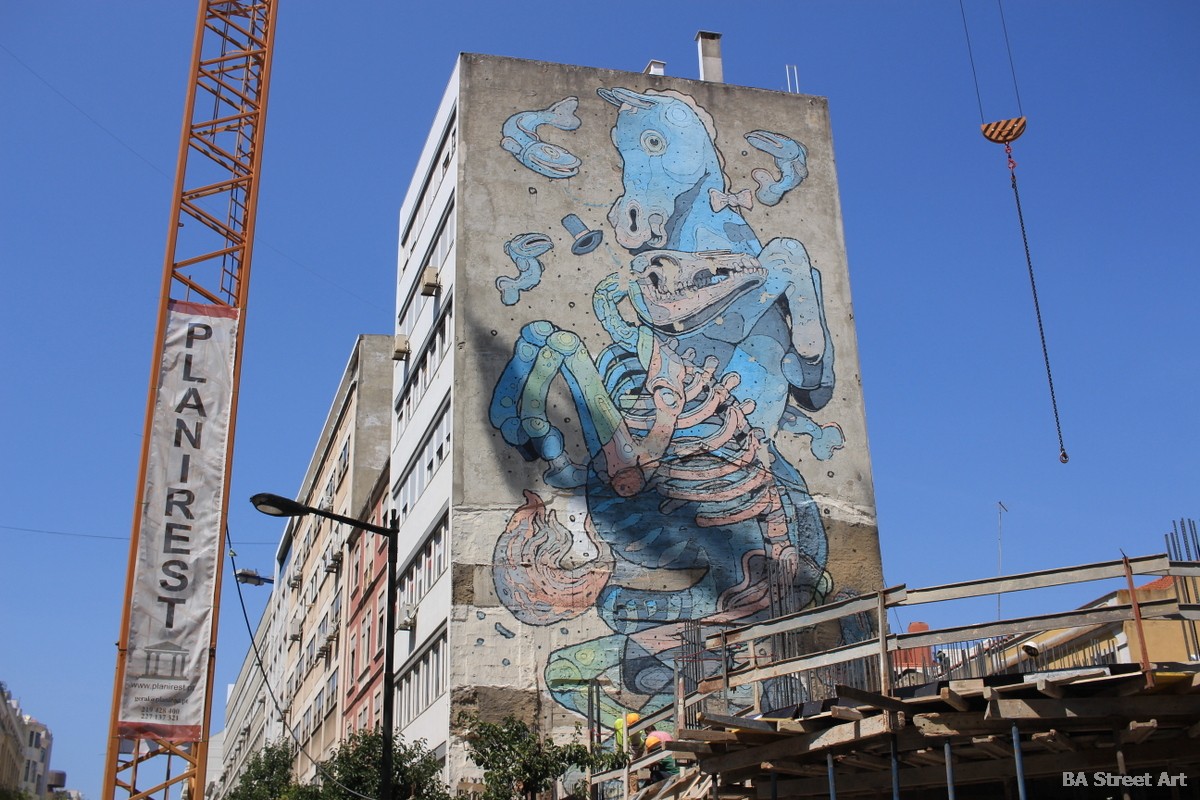 Spanish ‘painter of walls’ Aryz created a horse on the facade of this seven storey building in 2011. I interviewed Aryz in 2012 in Buenos Aires. Check out the interview here. This mural is located on Rua Rodrigues Sampaio, just around the corner from Avenida da Liberdade. Brazilian duo Toys and Omik gave this flower stand in Baixa a facelift with some of his fun and fantastic cartoon characters. I met Toys when he was in Buenos Aires in 2014 and he was painting a series of newspaper kiosks around the city. Brazilian artist Eduardo Kobra painted this mural in 2017 during the MURO Street Art Festival in Marvila. It features a stunning portrait of Raoni, the brave chief of the Kayapo people, who has been fighting to preserve the Amazonian rainforests and indigenous tribes from deforestation and industrialisation. Next to the mural by Kobra is a beautiful artwork by Ecuadorian artist Steep entitled ‘Consejo de agua’. or ‘Water council’. Steep likes to create murals relating to Latin American culture and ancestry and in particular biodiversity and man’s relationship with nature. 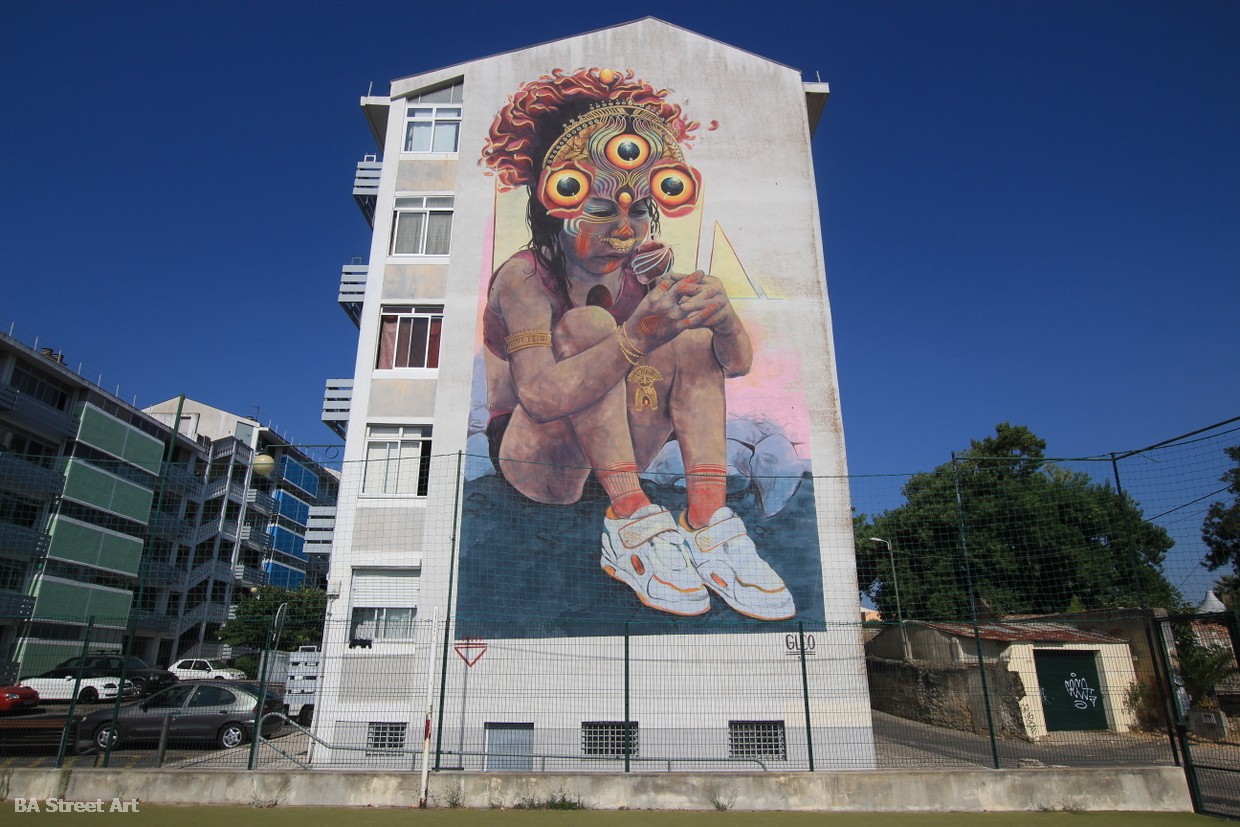 This mural by the Colombian street artist GLeo is called ‘Heart of Gold’ and she painted it in Marvila in 2017. GLeo also painted a mural in Buenos Aires with Bastardilla in 2016. See photos here 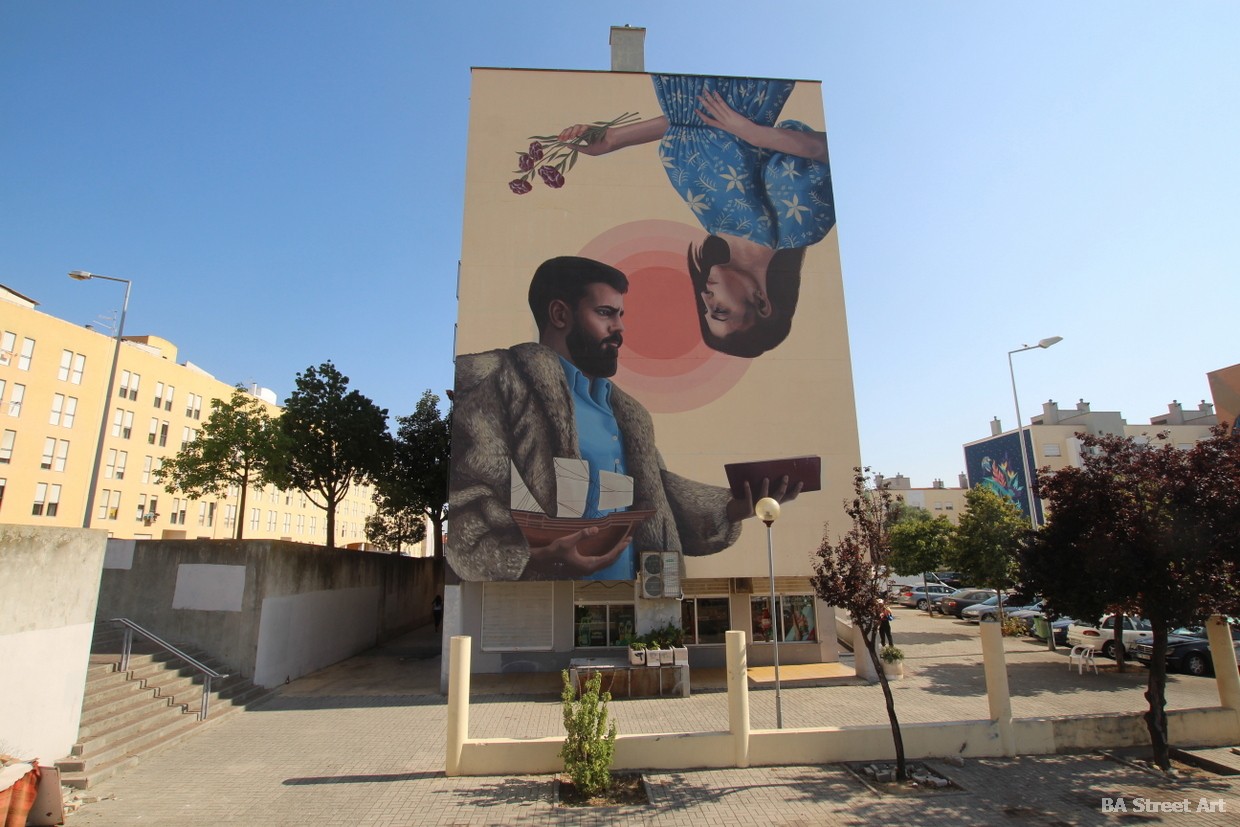 Uruguayan artists Colectivo Licuado painted this mural entitled ‘The meeting of a Past and a Present’ was painted in Marvila in 2016. It features an explorer and sailor relating the weight of the past – colonisation; and a woman holding a bunch of carnations relating to the lightness of the present – revolution and freedom. Brazilian street artist Nunca was in Lisbon in 2014 and left his mark with this mural of Portuguese explorer and sailor Pedro Álvares Cabral who is credited with discovering Brazil in 1500. This artwork can be found in the neighbourhood of Chelas. 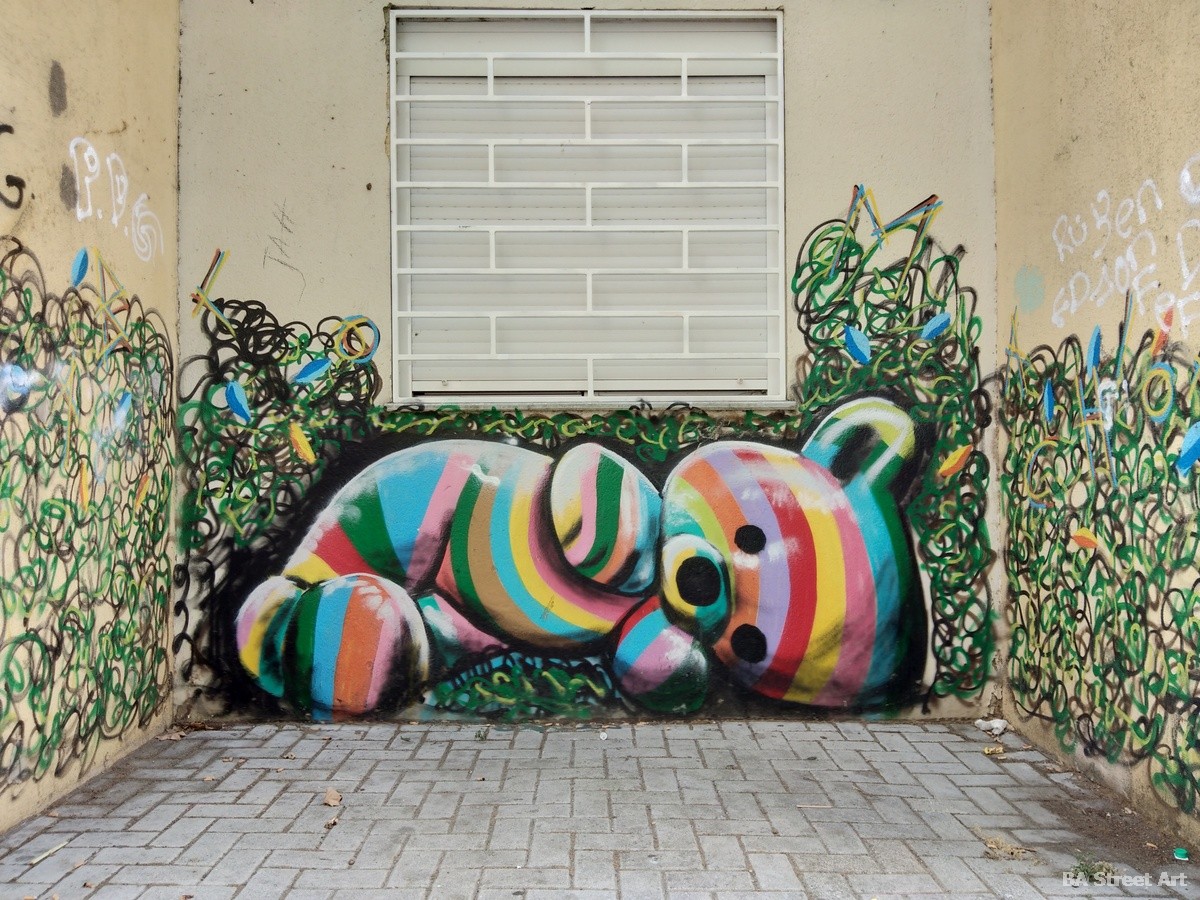