The political murals and propaganda on the streets of Belfast reveal a fascinating story about the Northern Ireland conflict and the religious and sectarian divisions between the Loyalist and Republican communities, as Matt Fox-Tucker of Buenos Aires Street Art found out.

Both the Protestant UK Unionist population and the Catholic Irish Republican community have used propaganda on the walls of Belfast to express their contrasting views. 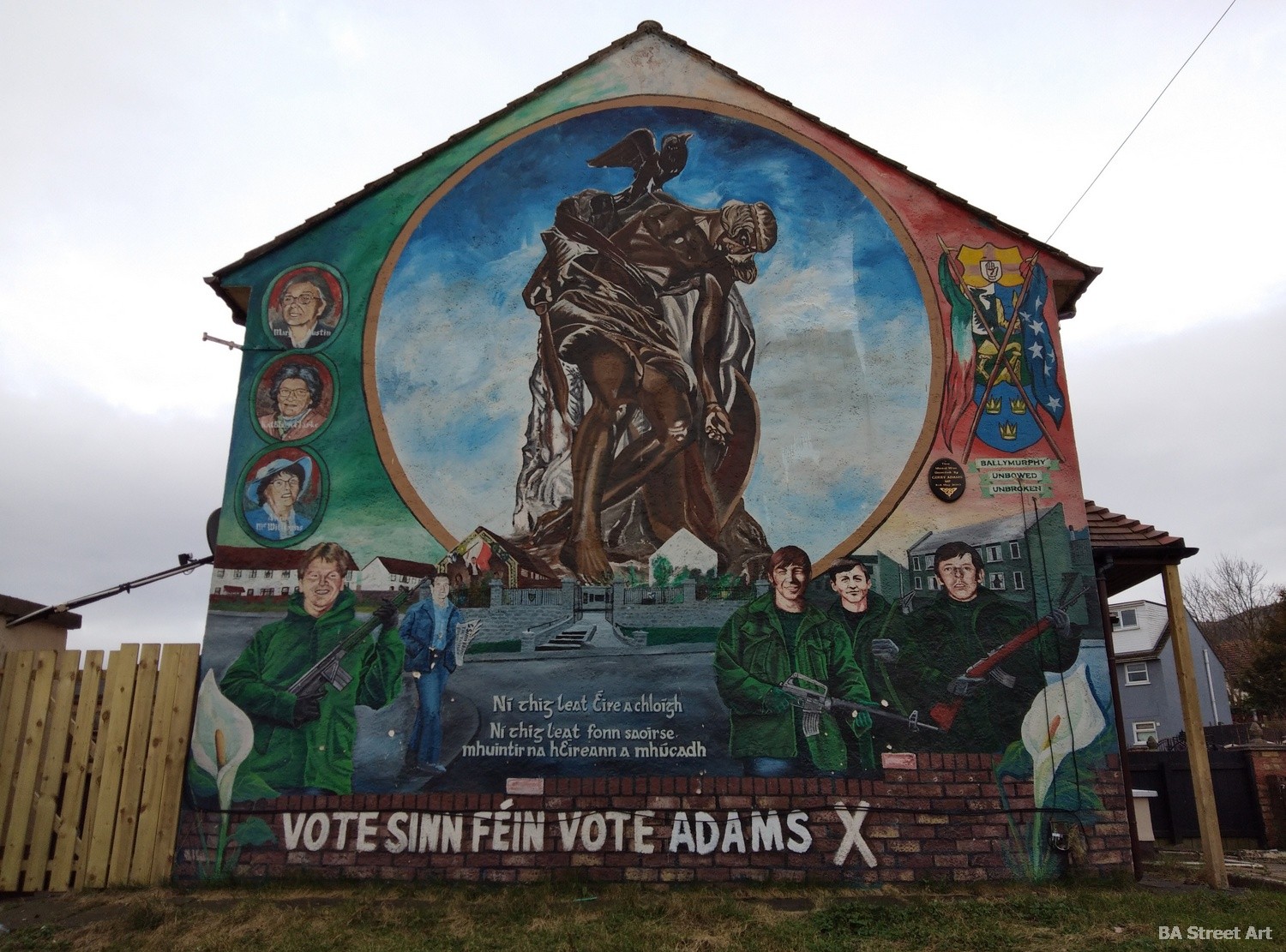 In the district of Ballymurphy, West Belfast, there are various pro-Republican murals supporting the IRA and also referring to the ‘Ballymurphy Massacre’ in August 1971 when 10 civilians were killed by British Army paratroopers. Pro-IRA mural (above) featuring Jim Bryson and Paddy Mulvenna, Gerry Adams’ brother-in-law, who were ambushed and killed by soldiers from the Royal Green Jackets regiment in August 1973 in Ballymurphy. 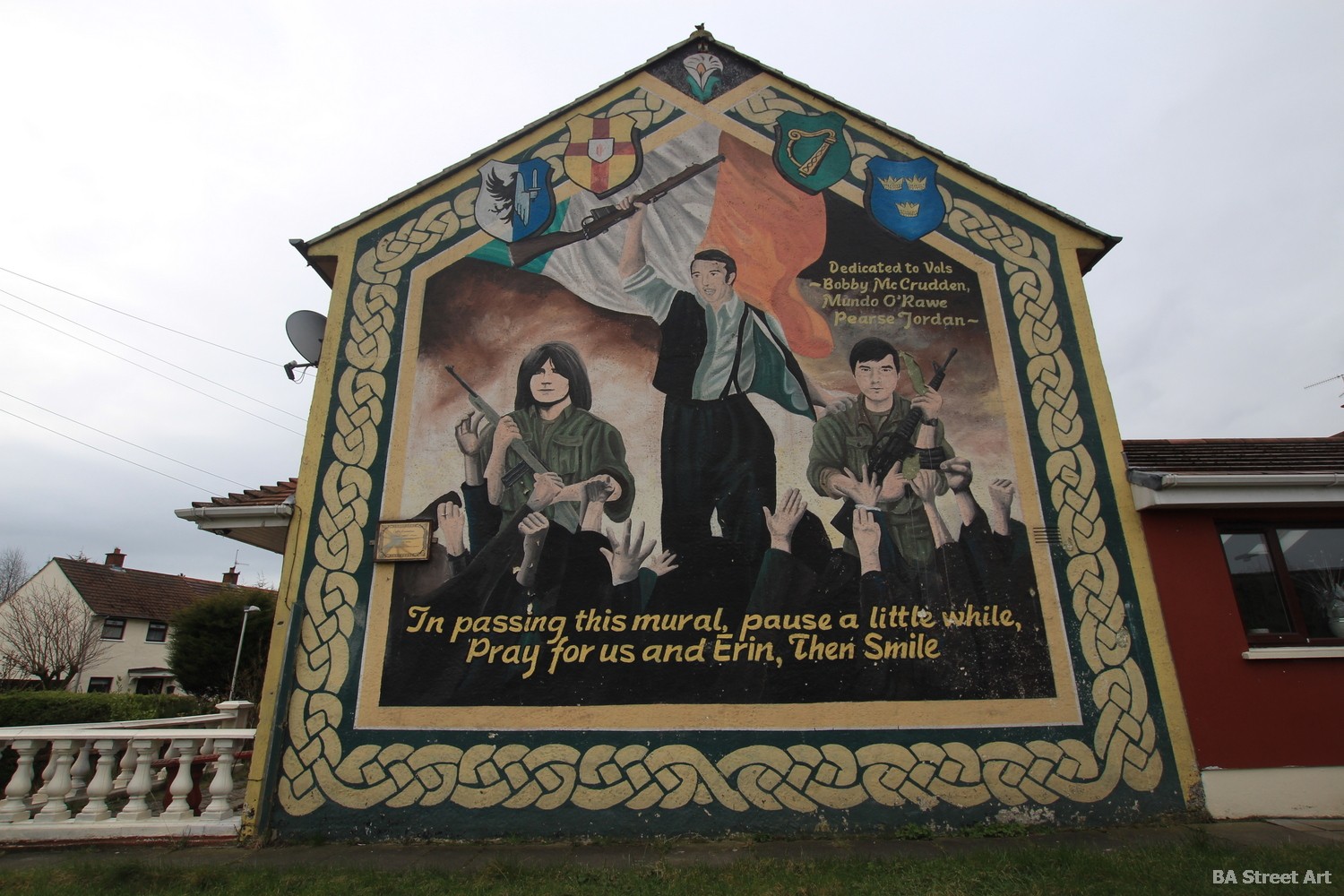 Another political mural in Ballymurphy pays tribute to three IRA volunteers Bobby McCrudden, Mundo O’Rawe and Pearse Jordan who were shot dead by an undercover Royal Ulster Constabulary Unit on the Falls Road in 1992. One of the most iconic political murals that represents the Republican cause is that of Bobby Sands at 49 Falls Road and the corner of Sevastopol Street. Sands was an IRA volunteer and hunger striker who died while in the Maze Prison in Belfast. He was the leader of the 1981 Hunger Strike, in which Irish Republican prisoners protested against the removal of their Special Category Status claiming they were political prisoners. During his 66-day strike Sands was elected as a member of the UK Parliament as an Anti H-Block/Armagh Political Prisoner candidate. Sands was also portrayed by actor Michael Fassbender in the 2008 movie Hunger. Sands, who was also the MP for Fermanagh South Tyrone, was buried on 7th May 1981 at Milltown Cemetery, West Belfast. More than 100,000 people lined the route of the funeral procession. This political mural (above) remembers the 30th anniversary of Sand’s death. Just off the Falls Road on Rockville Street is a political mural immortalising Kieran Nugent know as ‘the first blanketman’. Nugent was one of 399 Republican prisoners or ‘blanketmen’ in the Maze Prison in Belfast who had been protesting since 1976, wearing nothing but a blanket after the British Government abolished special status for people convicted of terrorist offences. The Irish nationalists maintained that they were political prisoners, fighting a war of independence, and not common criminals. They claimed that this status exempted them from wearing prison uniforms and excused them from prison work. 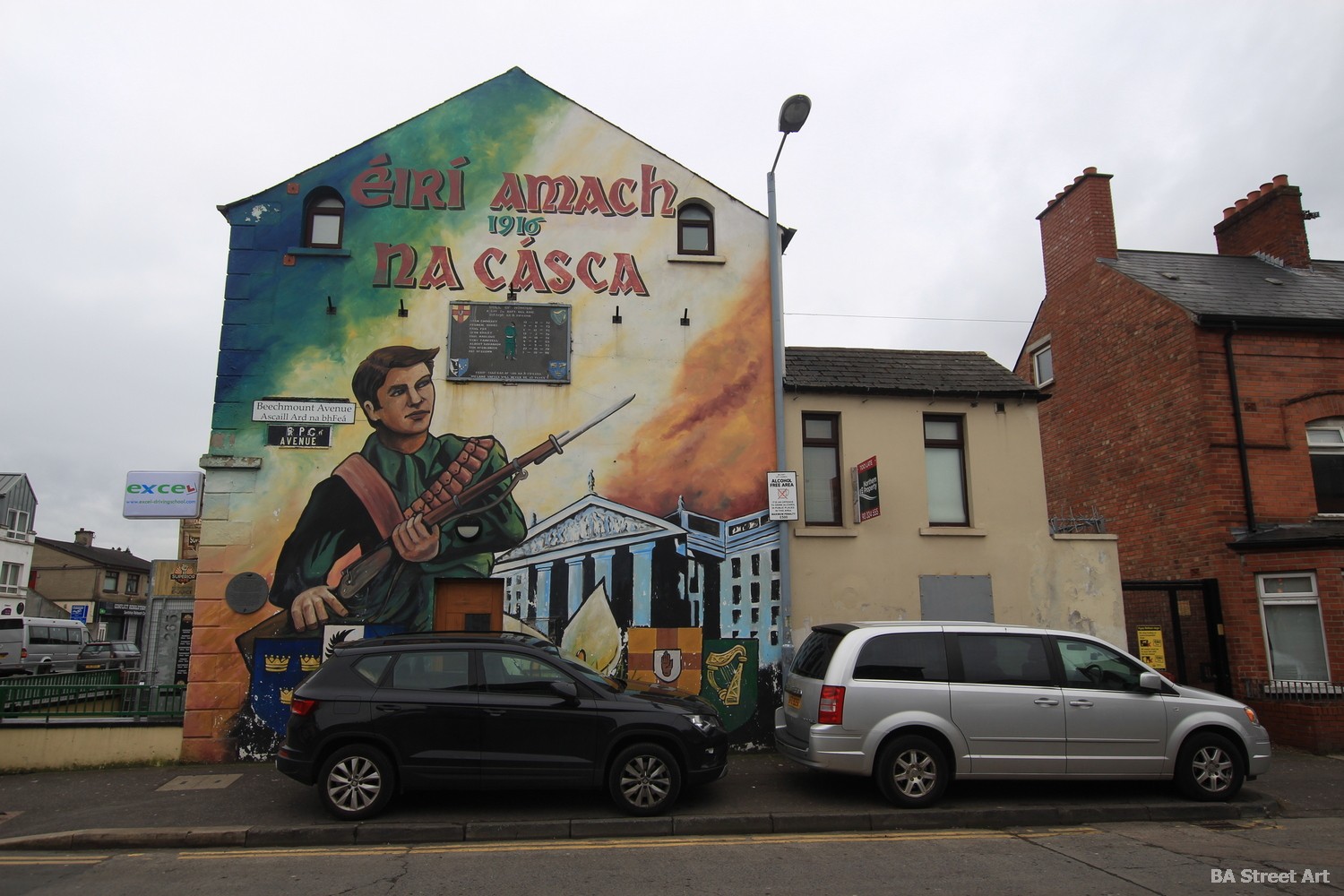 The Easter Rising, also known as the Easter Rebellion, was an armed insurrection in Ireland during Easter Week, April 1916. The Rising was launched by Irish republicans to end British rule in Ireland Pro-Republican mural on corner of McQuillan Street and Falls Road

A pro-Republican mural shows a phoenix rising from the flames of Irish parliament building in Stormont that is surrounded by British armed vehicles, artillery and troops. 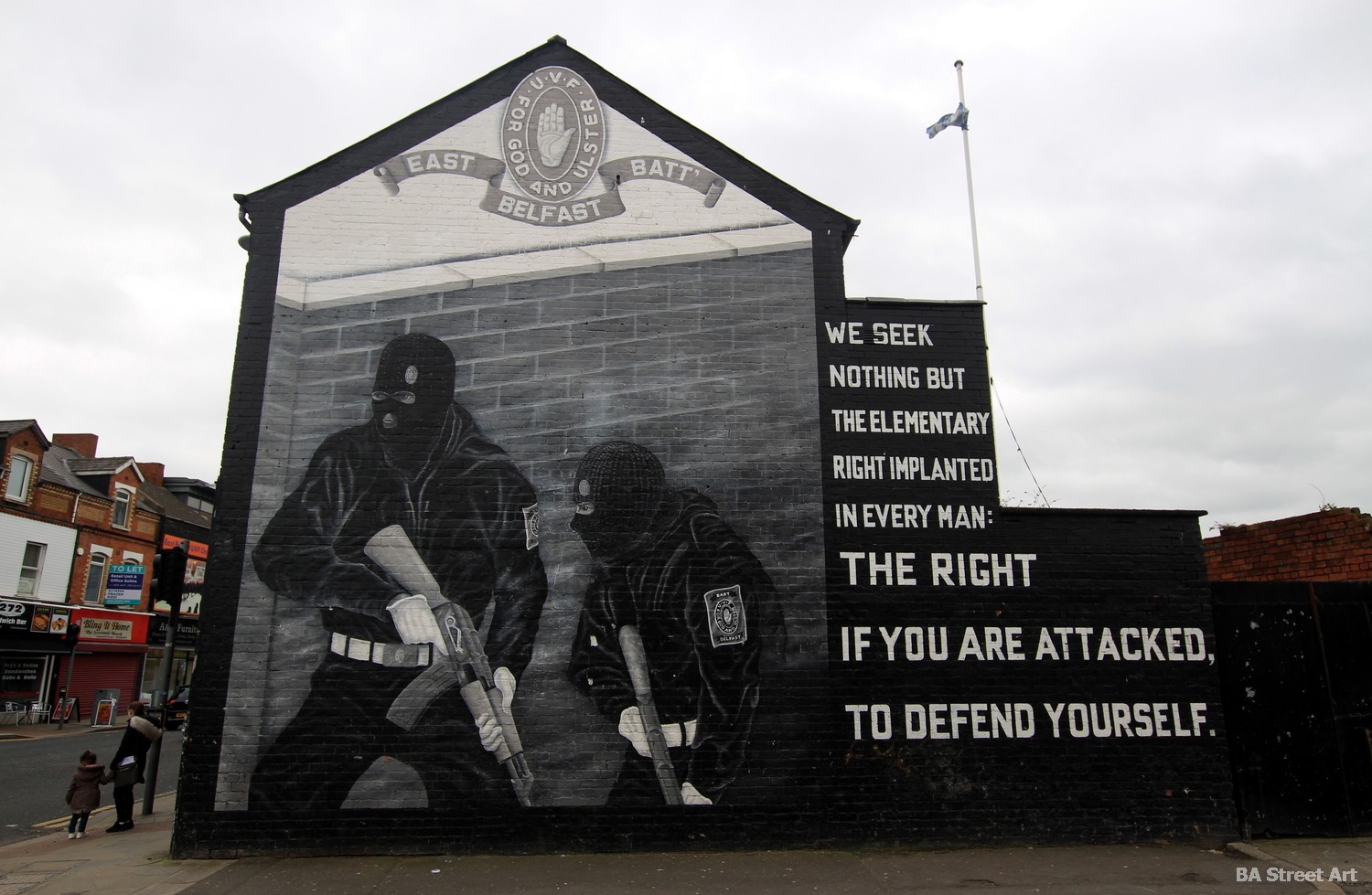 In East Belfast, along Lower Newtownards Road a pro paramilitary mural is dedicated to the East Belfast Battalion of the Ulster Defence Force showing two soldiers wearing balaclavas holding automatic rifles saying: “The right if you are attacked to defend yourself”. The Ulster Voluntary Force conducted an armed campaign for 24 years during the Troubles and was reportedly responsible for the deaths of over 400 individuals.

Leading loyalist Robert Dougan was shot down on 10th February 1998. Dougan was a member of the Ulster Defence Association who accused the IRA of carrying out his murder. A pro-unionist mural on Lower Newtownards Road in East Belfast reads: “The Ulster conflict is about nationality. This we shall maintain”, with flags of Ulster, England, United Kingdom, Scotland and Wales. There are a number of pro-Loyalist murals along Shankill Road and off Shankill Parade. One mural on the Shankill Estate remembers the IRA bombings during the summer of 1969 and shows two boys standing in front of of their homes that have been destroyed. In Sandy Row in south Belfast, the pro-Loyalist and protestant area of Belfast a political mural commemorates the Battle of the Boyne that took place on 12th July 1690 and the victory of Protestant King William of Orange over Catholic King James II, which started the protestant ascendancy in Ireland. 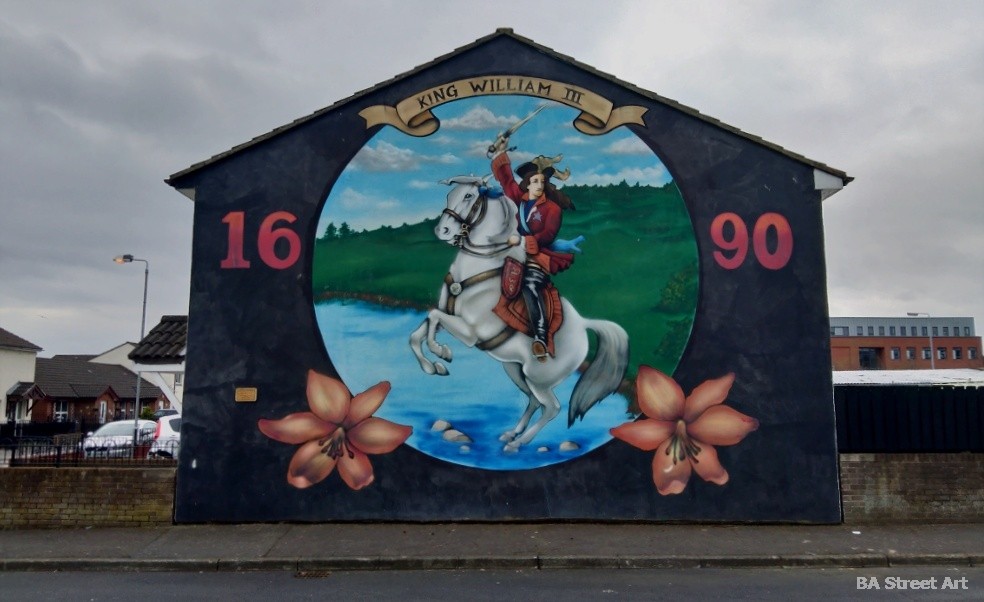 Another pro-protestant mural in North Belfast featuring William of Orange on horseback and the date 1690 commemorating the Battle of the Boyne.

On the junction of Divis Street and Northumberland Road is located one of the city’s most visited political mural sites often referred to as the ‘International Wall’. Several of the murals are now more politically correct relating to human rights, world peace and the environment. Several portraits have been painted of world leaders, freedom fighters and peace campaigners such as Frederick Douglass, Nelson Mandela, Mahatma Ghandi, Martin Luther-King, Barack Obama and Bob Marley. In an Orwellian revision of Irish history, IRA hunger-strikers and convicted killers have also been mixed in appearing alongside world leaders and peace campaigners on the International Wall.

Political mural on Northumberland Street featuring Francis Hughes who led one of the most feared IRA units of the 1970s that was responsible for scores of murders, and planted booby-trap bombs. Hughes himself was suspected of killing more than 20 people including 10-year-old Lesley Gordon and her father William, a soldier in the Ulster Defence Regiment.

Pro-Republican mural on Divis Street mixed in between more political correct murals promoting peace that reveals a timeline of events that led to the 1916 Easter Rising, an armed insurrection led by Irish Republicans with the aim of ending British rule in Ireland. A number of sectarian murals around Belfast have also been replaced in recent years by more politically correct artworks relating to famous Northern Ireland sportsmen such as George Best, David Healy and Rory McIlroy. Mural featuring midfielder Gareth McAuley after his goal helped Northern Ireland qualify for the knockout stage of Euro 2016 with a 2-0 win over Ukraine. On Whiterock Road, West Belfast is a mural dedicated to Patrick O’Connell that also features Lionel Messi. O’Connell played for Belfast Celtic, Manchester United, Sheffield Wednesday and Hull City. He also captained Ireland before a managerial career in Spain, where in 1935 he led Real Betis FC of Seville to its one and only La Liga title. That landed him the manager’s job at Barcelona as the Spanish Civil War broke out in 1936. With General Franco intent on destroying the famous Catalan club, O’Connell’s decision to take his team on a tour of North America generated the crucial funds needed to keep it afloat. Mural of Northern Ireland golfer Rory McIlroy in Holyland, South Belfast painted by local artist Danny Devenny. The mural has faded having been painted in 2012 a few months after McIlroy won his first major championship at the 2011 U.S. Open. In recent years, several sectarian murals have been replaced by more politically correct ones focusing on diversity, youth, learning, dreams and inspiring messages. This one (above) painted by Dee Craig features children’s author C.S. Lewis with the phrase: “You’re never too old to set another goal or dream another dream”. Elsewhere in the mural are students in the grounds of Queen’s University and a mother and child in front of Belfast City Hall. Mural dedicated to the C.S. Lewis and his book The Lion, the Witch and the Wardrobe in East Belfast

Mural off Upper Newtownards Road dedicated to C.S. Lewis and his book ‘The Lion, the Witch and the Wardrobe’, has replaced a Loyalist mural. A number of murals in East Belfast close to the Titanic Quarter are also dedicated to the famous ocean liner and Belfast’s ship-building history. This one on the corner of Newtownards Road and Dee Street. Dee Street led into the Harland and Wolff shipyard where RMS Titanic was built and set said on its fatal maiden voyage. Another Titanic mural in East Belfast that has replaced a political mural is on Newtownards Road. It’s entitled ‘Ship of Dreams’ and was painted by artist Ross Wilson with help from pupils from Beechfield Primary School and funded by Arts Council of Northern Ireland. Also check out our guide to the best street art and graffiti in Belfast featuring murals by international street artists such as Conor Harrington, MTO and Smug here END_OF_DOCUMENT_TOKEN_TO_BE_REPLACED

New York graffiti artist Trace has been in Buenos Aires and painted a cool new piece with Teko and Lynk... END_OF_DOCUMENT_TOKEN_TO_BE_REPLACED

Detour was staying in Buenos Aires a couple of weeks ago and found time to paint this new mural in...