The biggest mural in the city centre was painted by Escif in 2018 and is located on Avenida Jacinta. It features a huge mobile phone and is entitled “La vida es otra cosa” (“Life is something else”) and was sponsored by Greenpeace. It relates to Valencia becoming a sustainable city. Escif’s message is about consumerism and man’s obsession with making money and buying things such as new cell phones has a detrimental effect on the environment and world around us. 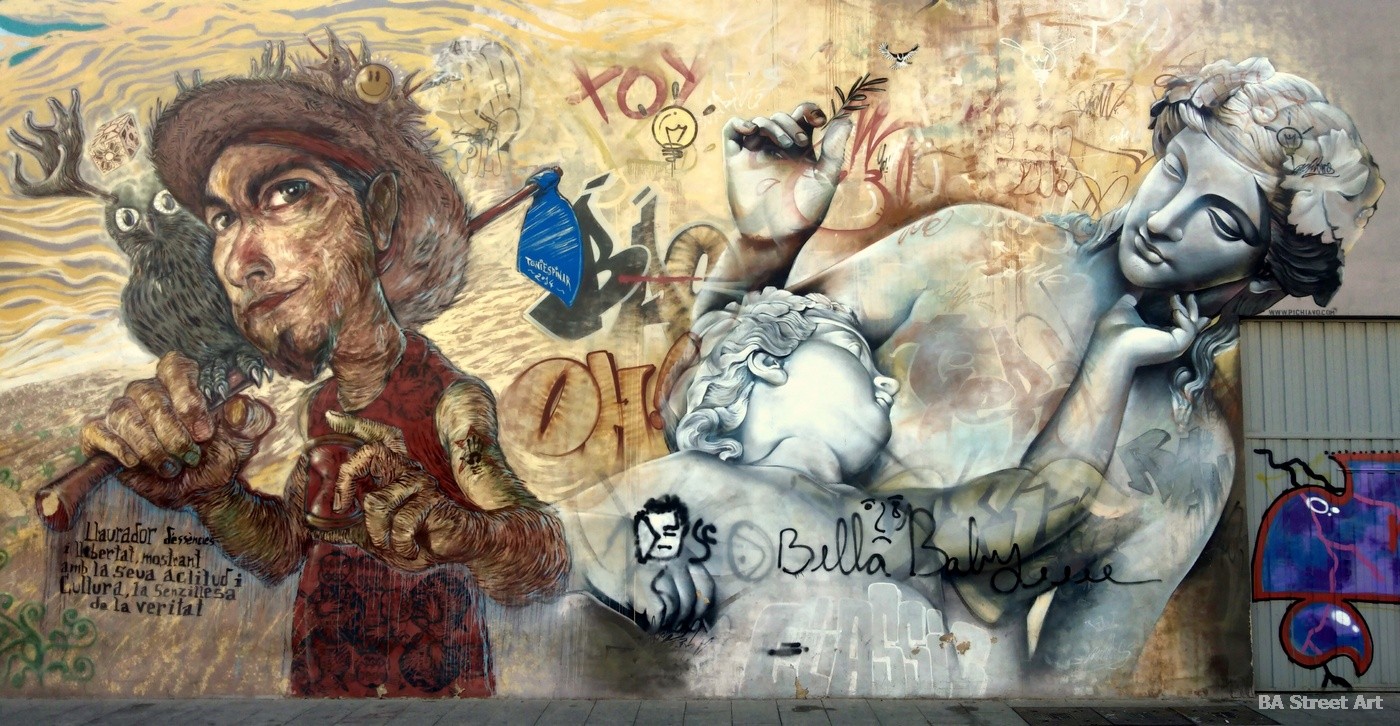 Another of the biggest murals in the city is located in the neighbourhood of Velluters created by Valencia duo PichiAvo together with Toni Espinar and other artists. PichiAvo’s section of the mural features Bacchus, the Roman god of agriculture, wine and fertility. The theme of the mural relates to the history of the neighbourhood incorporating elements such as farming, market gardening and the silk industry.

The mural project including artworks by Deih and Julieta was part of the Intramuros street art festival held in Valencia in 2014.

El Carmen, located within the Ciudad Vieja or old city, is a charming neighbourhood to wander around with its small squares, many pedestrianised areas, narrow streets and alleyways making it unwelcoming for heavy traffic. Less than a decade ago, many buildings here were falling down and there was a surplus of blank walls. Since then, led by street artists such as Blu, Escif and Hyuro, have helped transform El Carmen into an urban art hub. 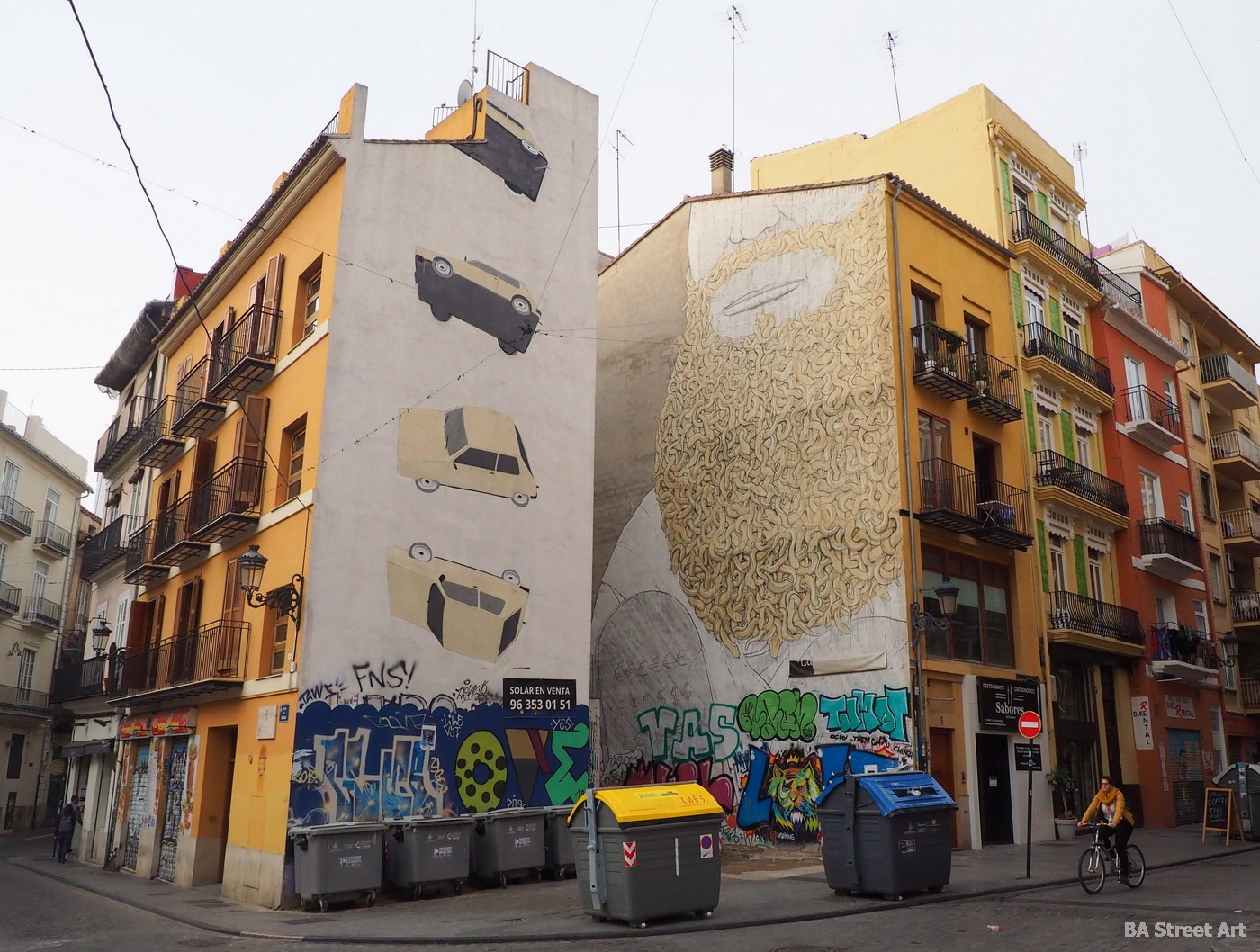 Plaza de Tossal is a good place to start from where two of the city’s most iconic murals are located, painted by Italian street artist Blu and Escif in 2011. Blu’s artwork depicts Moses with a beard of snakes holding two tablets with dollar and euro signs. To the left of it, Escif’s mural depicts some tumbling cars.

Julieta’s murals can be found all around the Ciudad Vieja. This one features a girl with cats and flowers in front of a car park on Calle Moro Zaid. 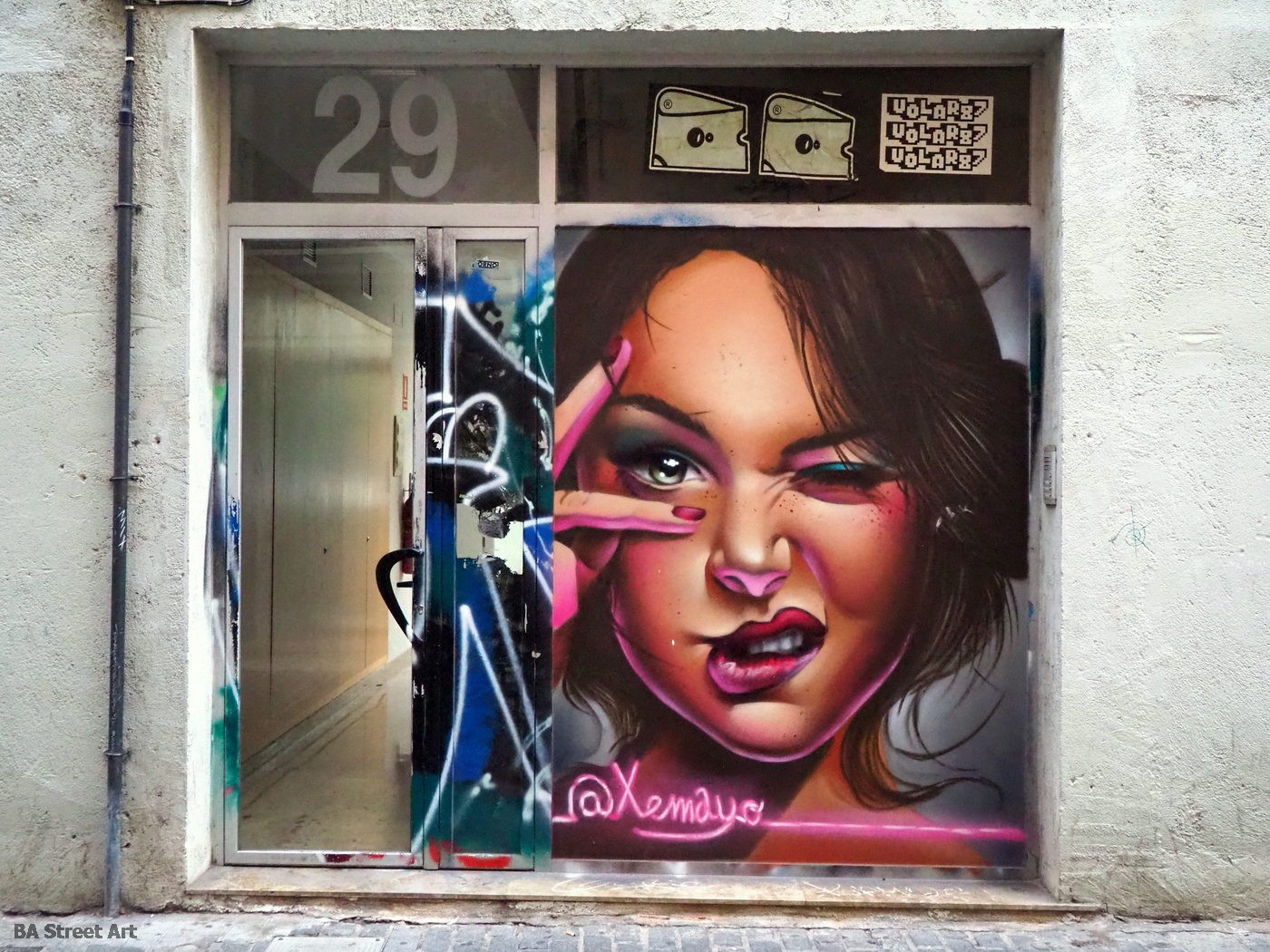 Carrer de Moret, also known as Calle de los colores (‘street of colours’), has become one of the most popular spots in the city for tourists to take selfies. Local photographer Alfonso Calza came up with the idea to invite artists to recreate some of his iconic photos such as as the kiss, and girl on the bridge on the walls on the alleyway where his studio is located. 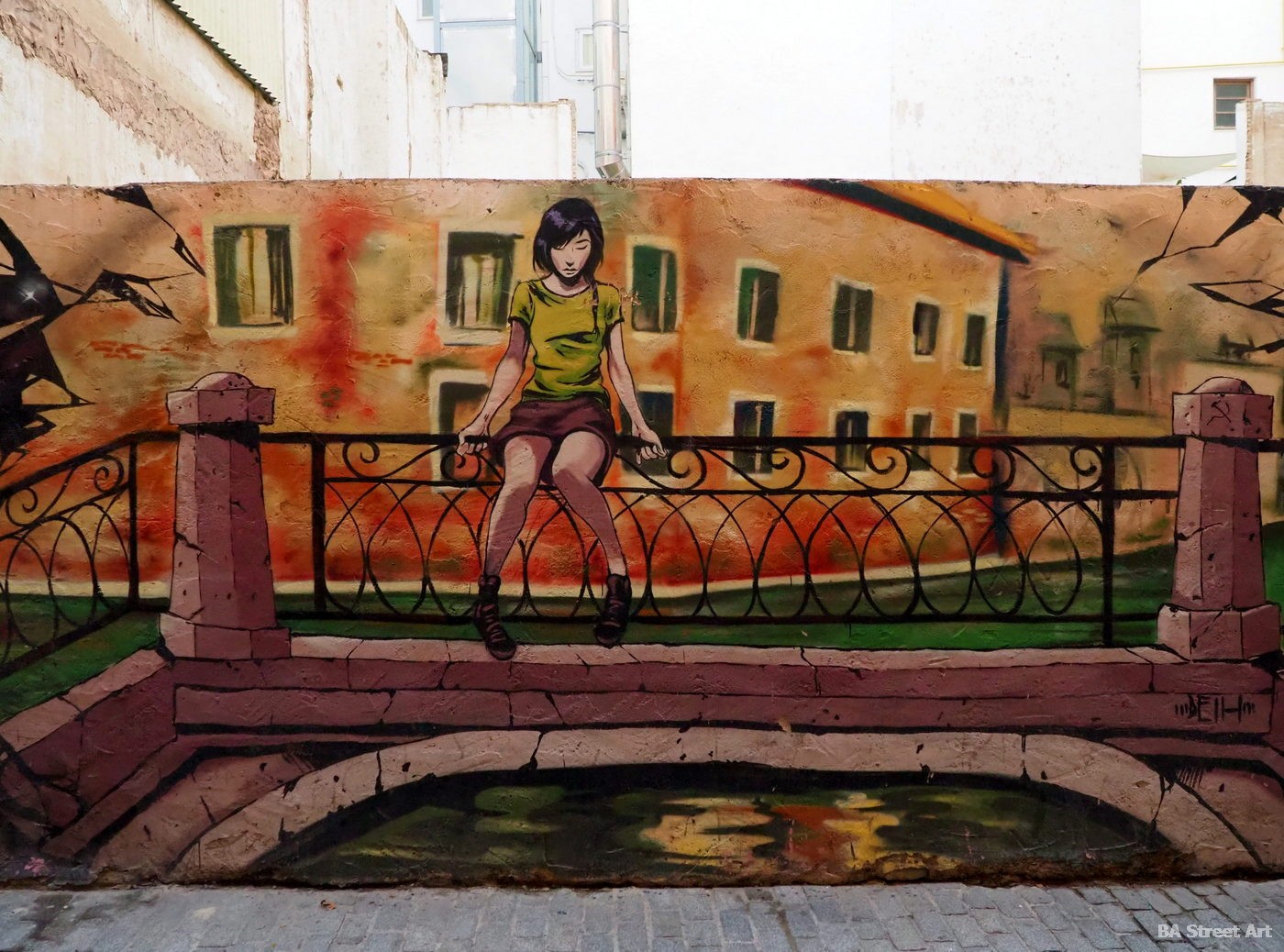 Around the corner from Calle Moret facing Plaza del Carmen is the office of CIMA (Ciudanos Mayores de la Comunidad Valenciana). All three sides of the building are decorated with murals by local painter Cabiscol featuring landscapes with animals, buildings and city life. Plaza de Mossén Sorrel is another good spot for graffiti with a kid’s playground that has been recently painted with cartoon characters including Garfield and friends with a tiger. Around the corner on the same block is a mural by Deih that appears to be a mummified spaceman or alien. Close to it is another artwork by Julieta. The two artists often paint together and are both from the XLF crew. A few metres away is a striking mural by Italian artist Ericailcane featuring some his characteristic animals with a horse being pulled by two snails. 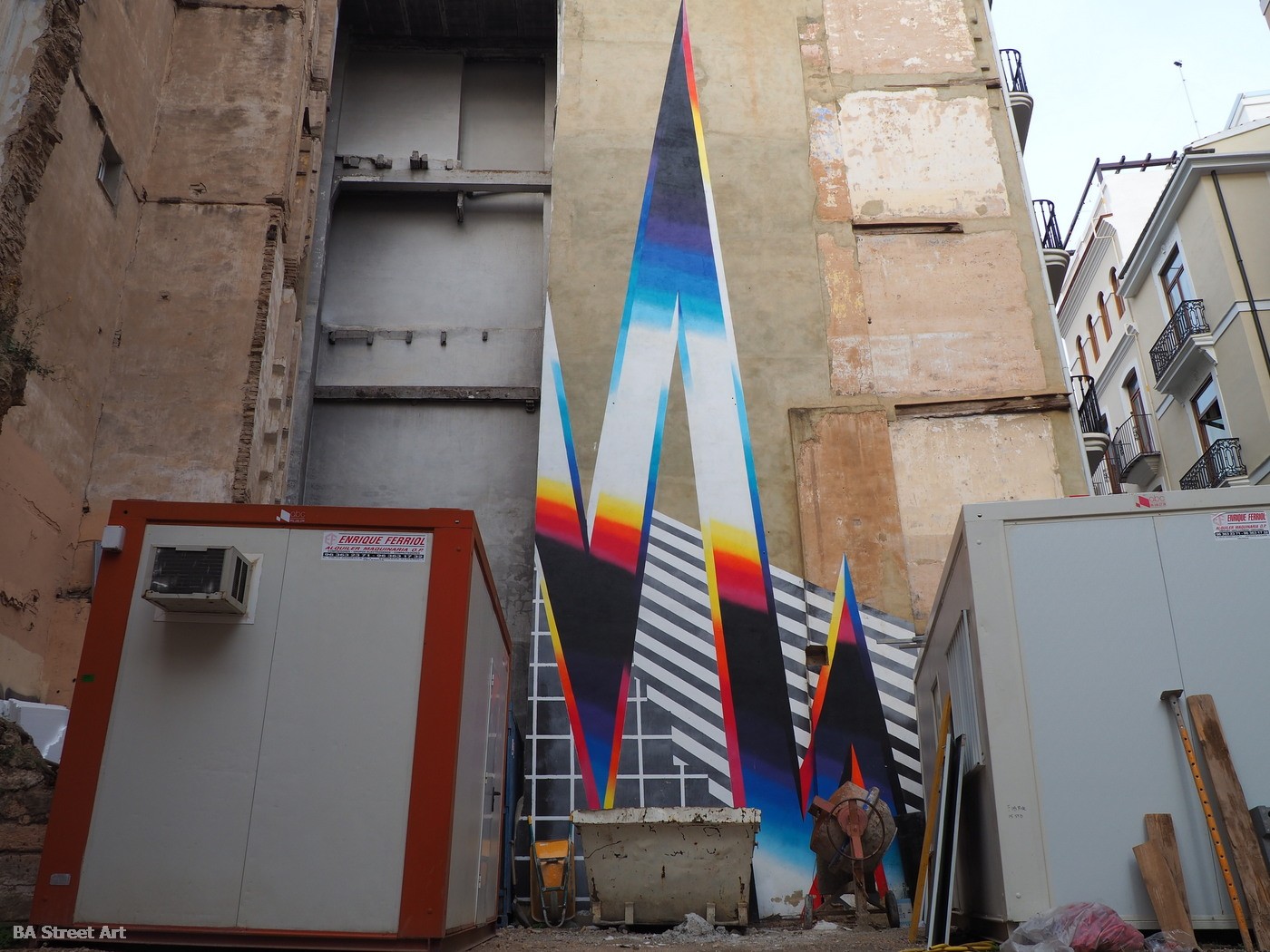 More artworks can be found in the streets a few blocks away from the Central Market including one by Argentine-born artist Felipe Pantone featuring his dynamic geometric patterns, triangles and shapes.

Another street artist from Argentina now based in Valencia is Hyuro. She is famous for her figurative and monochromatic works. This artwork is along an alleyway around the corner from Plaza Colegio de Patriarca but a number of other works on this street have recently been tagged or painted over. At first glance it might appear to be a mural put it’s a Photoshopped image that has been printed on a tarpaulin sheet. A number of these interventions by artist Luis Montolio can be found fixed to facades of buildings around the city with images and scenes that typify Valencia. Here we see Spanish singer Rosita Amores standing in the middle of an enormous flying casserole dish referring to ‘la Paella Valenciana’. The difference between traditional paella and paella from Valencia is that it includes rabbit and chicken rather than seafood. Behind IVAM Modern Art Museum along Calle de Beneficencia is a large square with a long wall on which Escif has painted with many different references, motifs and symbols relating to the neighbourhood and its social and political history. You can also see a number of Roman sculptures in the composition. 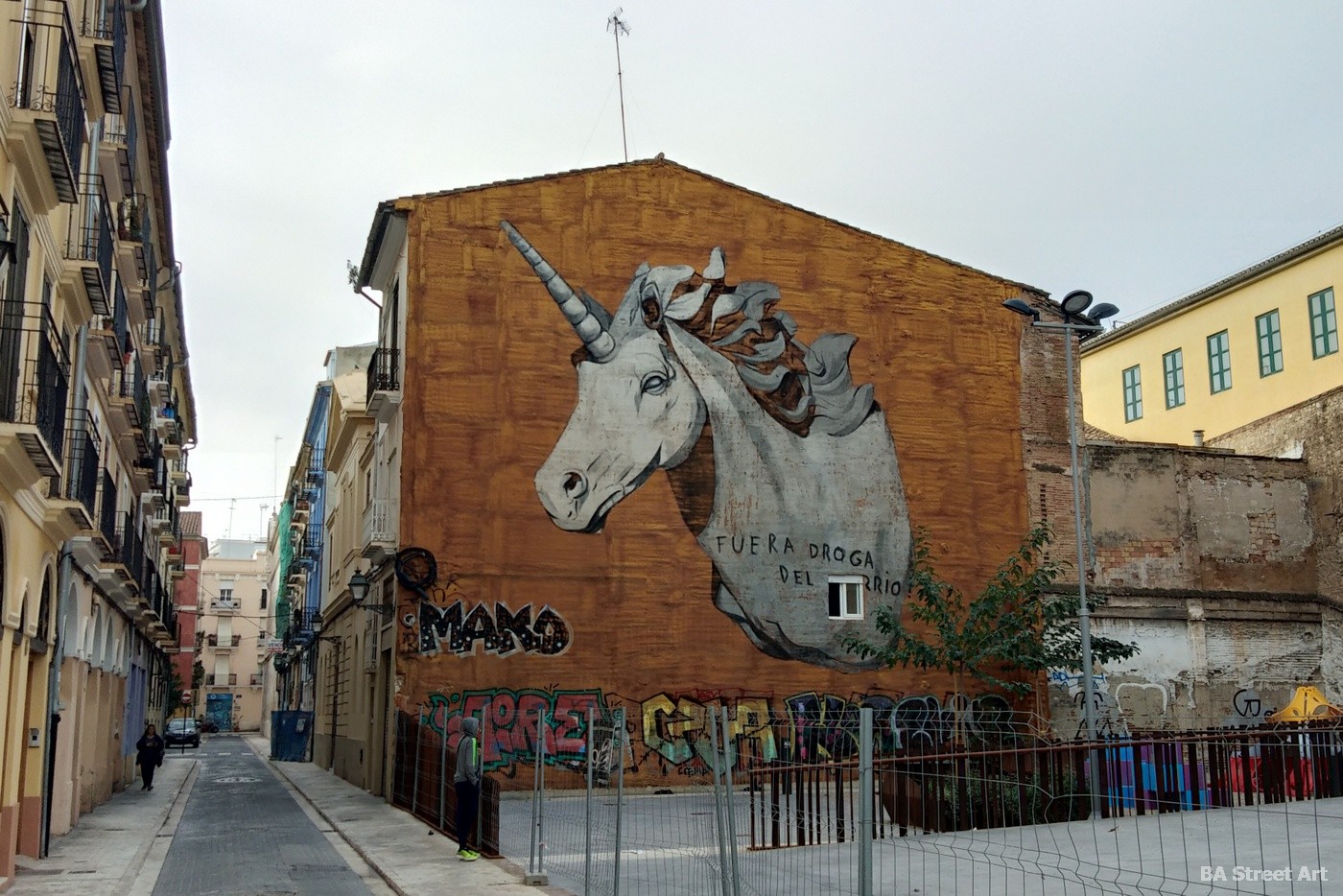 Another mural by Escif features a unicorn and the phrase “Fuera droga del barrio” to help combat drug-dealing and addiction in the area. 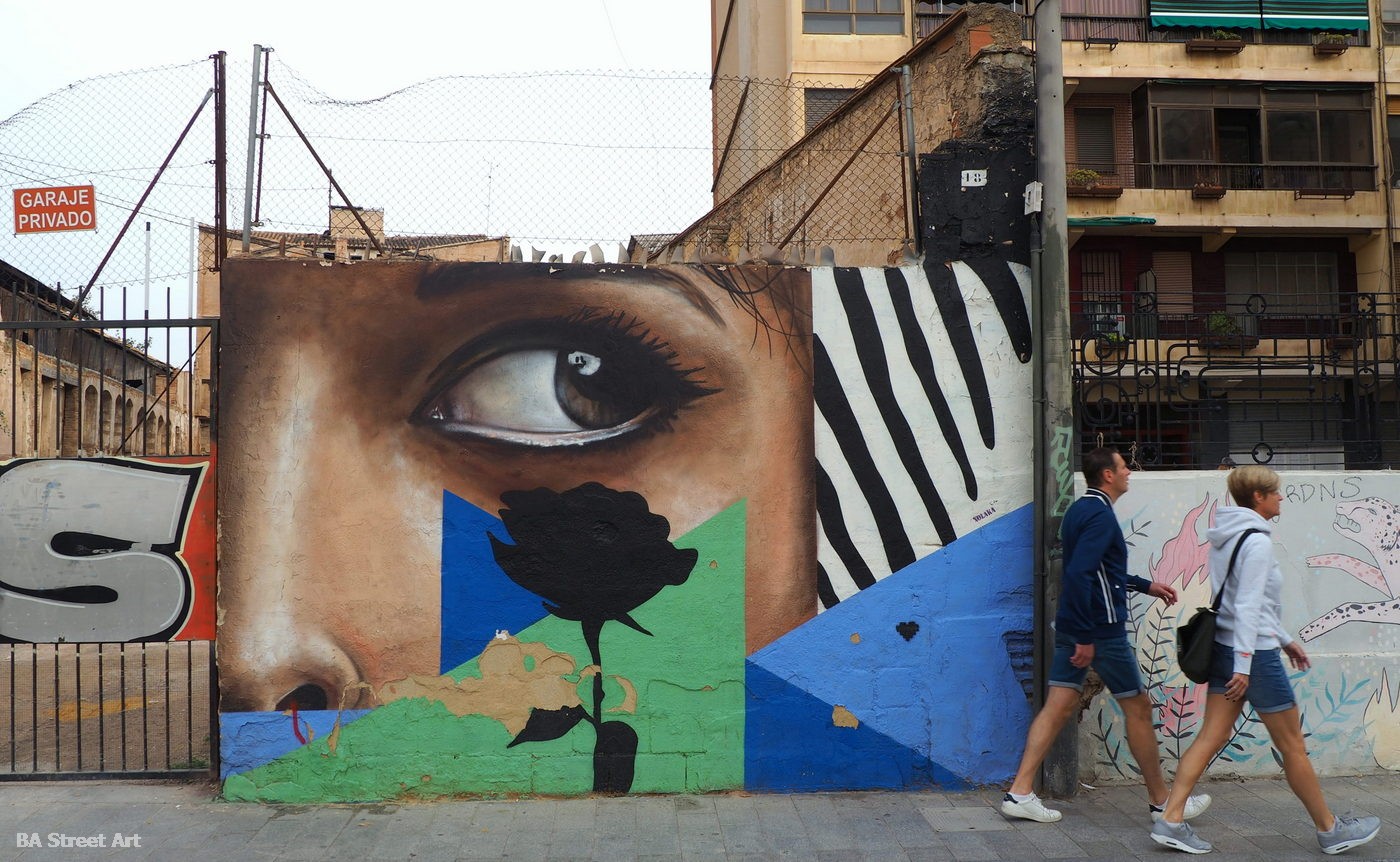 Valencia street artist Xolaka who specialises in painting portraits has also painted a mural at the end of the square. And some of the streets off Calle de Beneficencia you can also see more urban art by the likes of Julieta, Solo and Jesus Arrue Mora who has painted a portrait of David Bowie as Aladdin Sane. 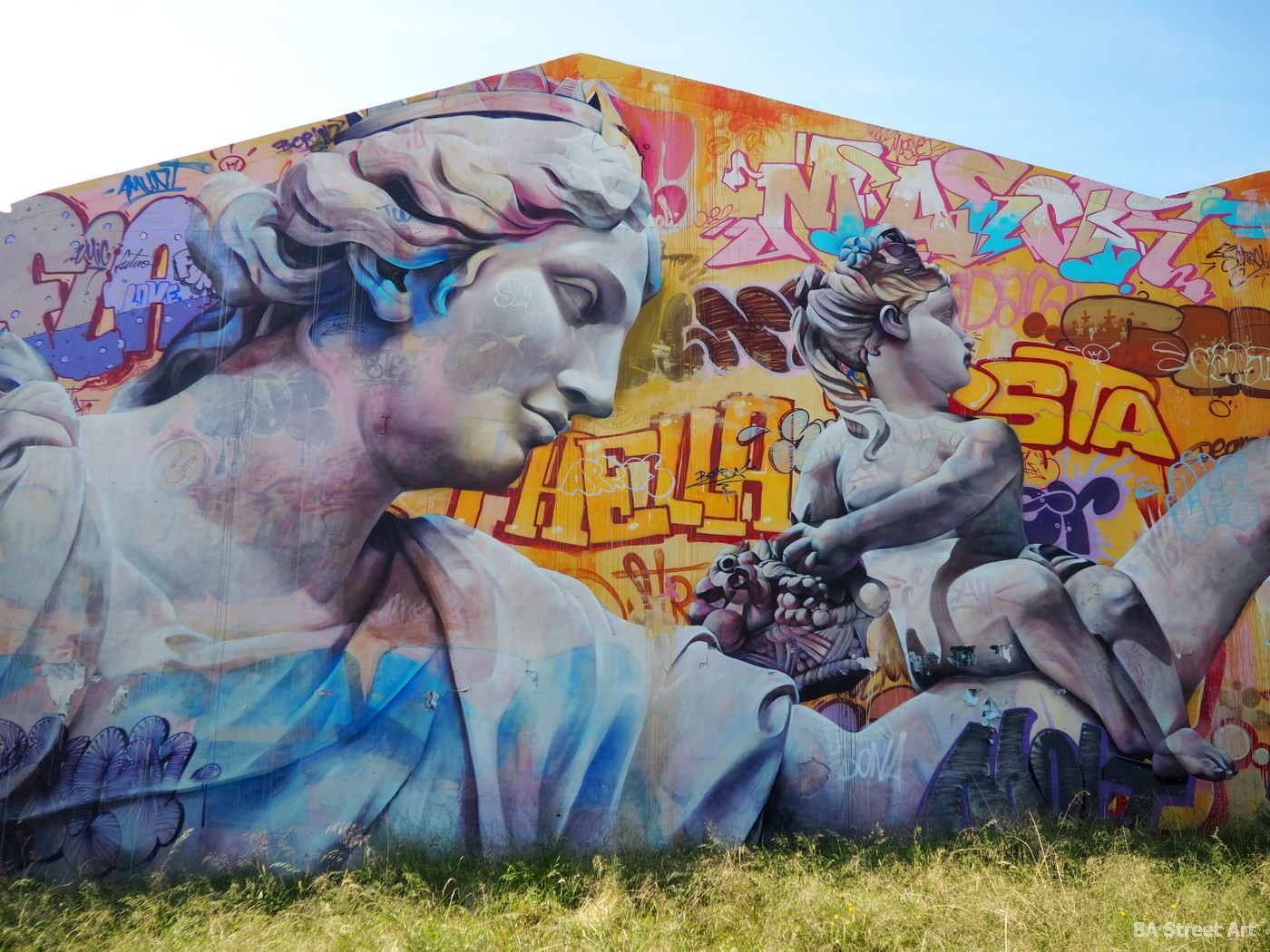 PichiAvo have painted their biggest mural to date in Valencia in Ciudad de Artista Fallero. The mural featuring Roman gods & figures mixed with traditional graffiti measures 600m2 and was sponsored by the Department of Cultural Heritage with the objective of helping regenerate the area. 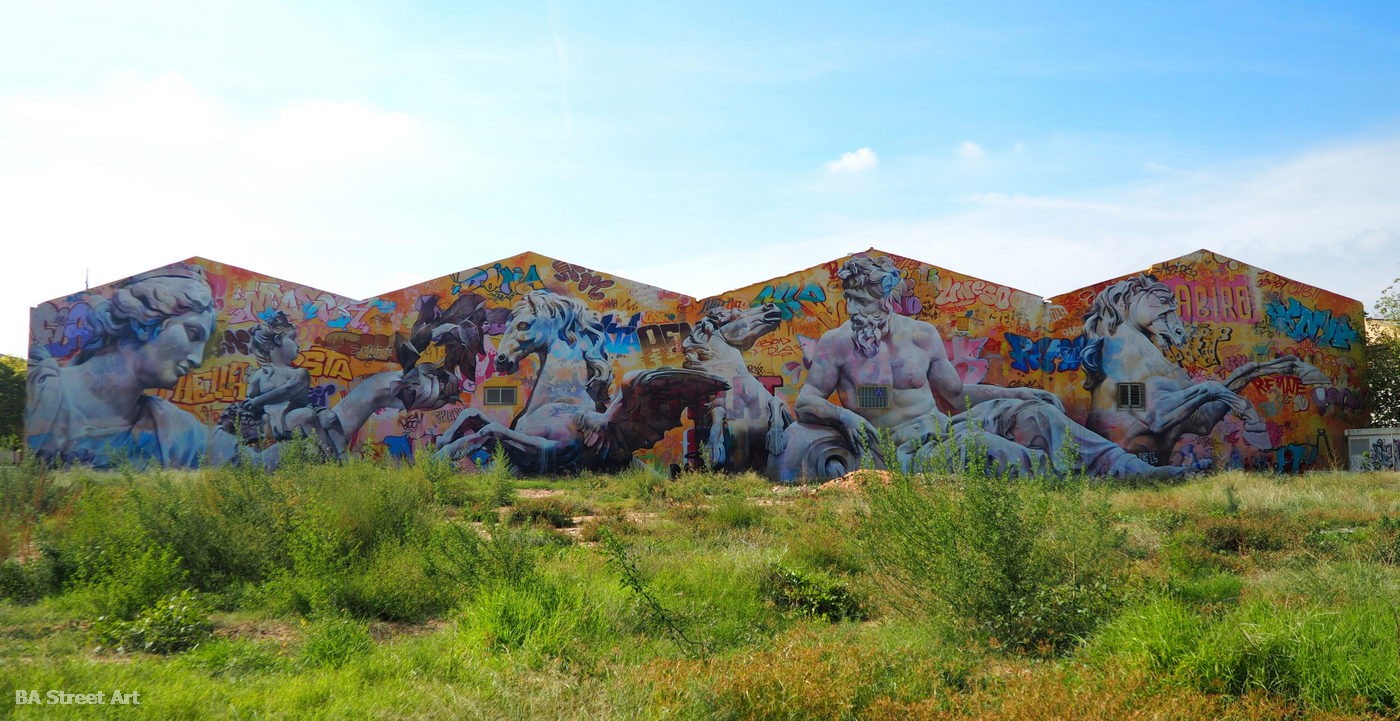 The zone is well known for its artists’ studios and warehouses where ‘fallas’ (sculptures and puppets) are made and then burnt during the world famous festival in Valencia that is held annually in March in commemoration of St. Joseph. 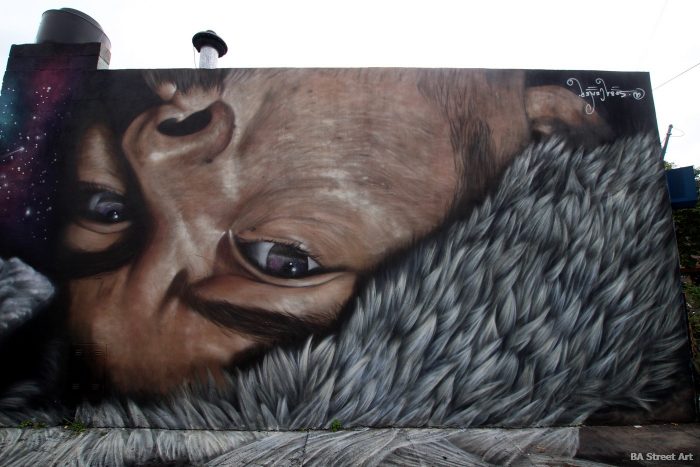 END_OF_DOCUMENT_TOKEN_TO_BE_REPLACED

Seba Cener has painted a new mural in Martinez, Buenos Aires. The Argentine street artist has been experimenting with a... END_OF_DOCUMENT_TOKEN_TO_BE_REPLACED

Chilean street artist Paula Tikay and Argentine artist Tatu have teamed up to paint a new mural in Buenos Aires.