The craze first took off in the USA and yarn bombing is now catching on in Buenos Aires. Licia Santuz is the city’s first yarn bomber and has decorated trees, lamp posts and railings around the Argentine capital with her beautiful and colourful designs that she describes as “graffiti with wool”. 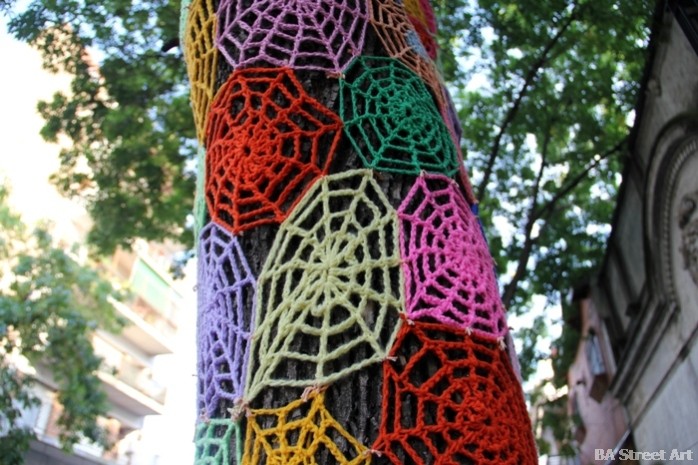 Licia is a plastic artist from Treviso in northern Italy and first came to Argentina in 1987. She told Buenos Aires Street Art how she took up yarn bombing and about her passion for knitting. “One day I was at home watching TV and saw someone doing it and thought ‘wow!’, said Licia. “My youngest daughter Luna showed me a knitting page called ‘Salty Knits‘ on the internet and it was a revelation. I then gave up painting for a bit because I was a little frustrated being all the time by myself, and I started to knit. I couldn’t stop, I didn’t do the shopping, there was no food in the house, all I wanted to do was knit!” 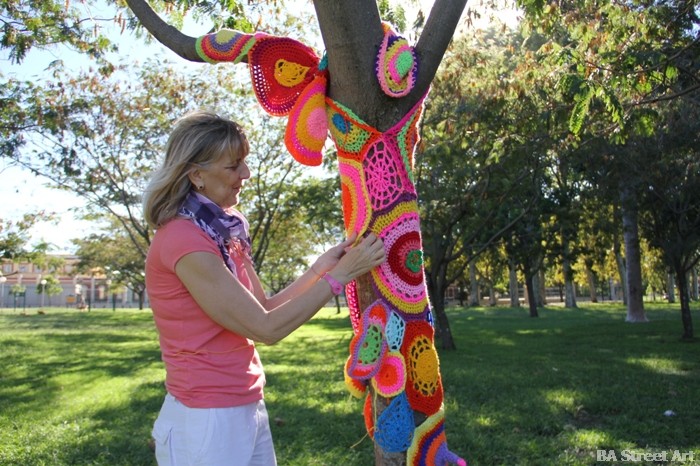 Hang time: Licia in the park in Palermo

Licia has been living in Buenos Aires since 2002 and made her first outdoor intervention in 2009, hanging her designs on branches of trees in the park by the lakes in Palermo. “I love the Jacarandas, they are so beautiful,” she recalls. “It was winter and all the trees were without leaves and colour so  I decided to make them all violet, and I started to knit and hang yarns.” She says yarn bombing isn’t difficult to learn. “It’s easy to do and the grannies know all about it. My mother taught me to knit when I was little. I know how to paint and if I’m looking for some inspiration I look on Youtube at a video called “The Art of Crochet by Teresa.” 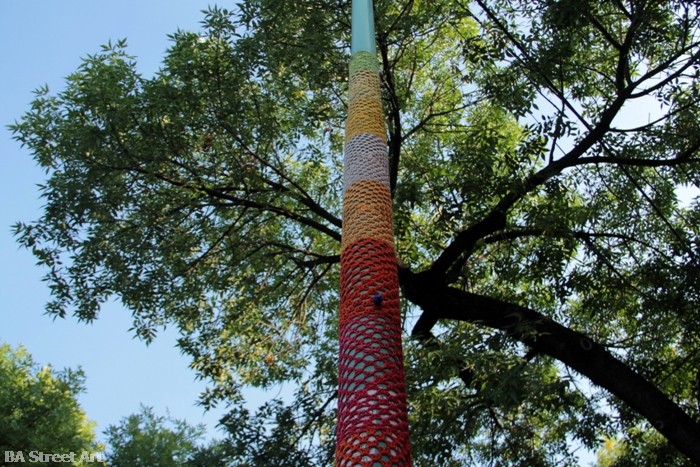 Things then started to take off for Licia while daughters, Luna and Carolina were working in Cafe Voltaire in Palermo and they persuaded the management to let their mum decorate a lampost outside. A local resident who lives near the cafe asked Licia to do something similar on his tree, and then a hotel and a restaurant did the same and the requests have continued to come in. 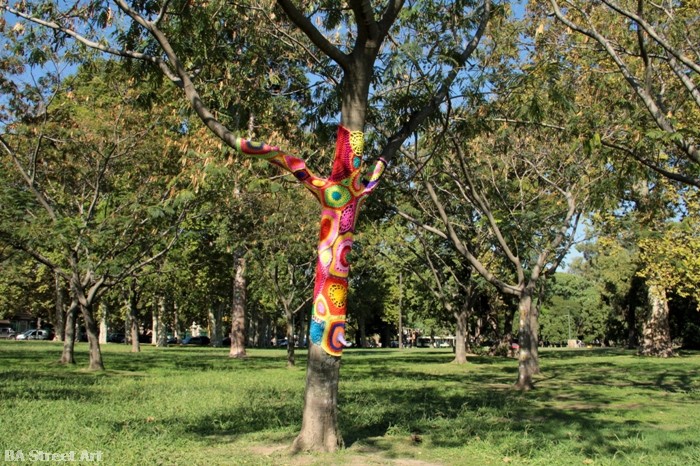 So how does Licia view this relatively new phenomenon which doesn’t seem to have a phrase to describe it in Spanish. Is it simply knitting outdoors or street art? “It’s like a graffiti with wool,” she says. “When you dress a tree it’s a type of urban intervention and also a play with colours. For me, it’s a freedom I get that painting doesn’t give me because when you are in front of a painting there is always some reason behind what you do. You have to create something beautiful or something that makes people think.” When Licia is out yarn bombing she says she feels no pressure to produce a masterpiece. “When I am doing this, I am not forced to do anything, I only have to chose the colours by instinct, it can look chaotic at first but there’s an order to it because the finished article has a lot of colours and there’s a relationship between them.” 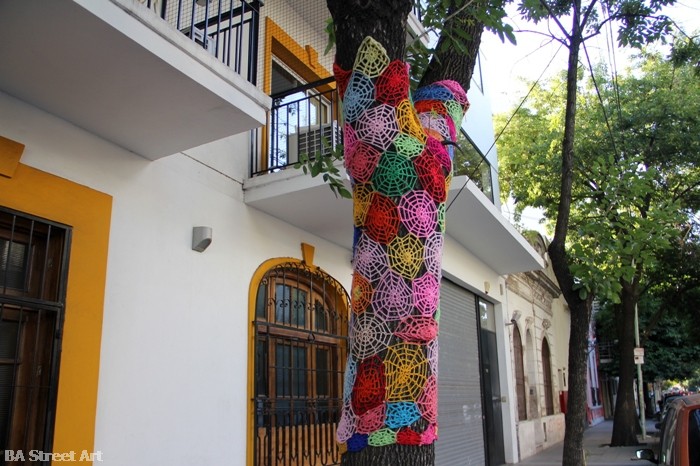 Magda Sayeg from Texas is considered to be the founder of the yarn bombing movement after knitting a cozy for the door handle of a shop in Houston in 2005. She then became famous for covering a bus in Mexico City with her yarns and making interventions all around the world. Likewise, Licia is considered to be Argentina’s first yarn bomber and it’s a title she’s proud of. “I love it, it gives me a rush of adrenaline and makes me think where can I go to make my next intervention.,” says Licia. While Licia is enjoying all the attention she still remains very down to earth. “Most artists have a bit of an ego but I’m  a little more shy and not searching for fame. Lots of poeple see my designs particularly when I make them in the park but the main reason I do them here is because I feel comfortable and it’s quiet and relaxing.” 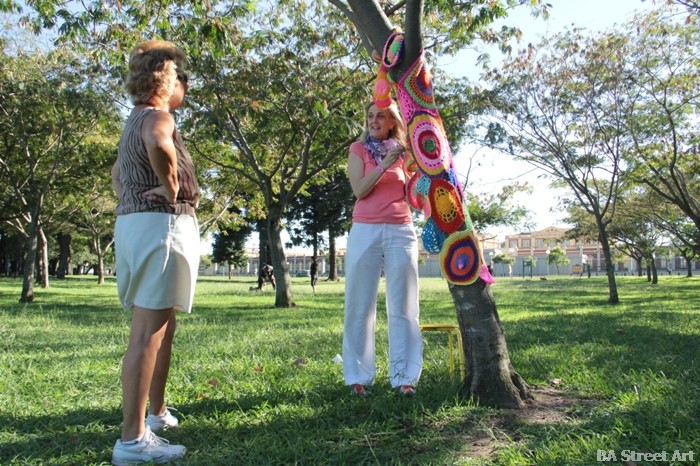 One of the things Licia likes most about yarn bombing in Buenos Aires is the positive reactions of the people and passers-by. She says it’s different than the reception she has received when making her crochets in Genoa and Treviso. “In Italy if you do this you might have to pay a fine and they take them away,” she says. “Here, it is different and it brings a smile to people’s faces. The people tell me: ‘You have cheered up my day and it makes me so happy seeing the trees with all the colours’.” While Licia’s designs are proving a hit around the city she revealed that not everyone has taken a liking to them. “I had to make one (intervention) in Villa Crespo twice because someone stole it. It was a crazy old woman who was angry and thought it was staining the tree.” She added: “I don’t think the trees mind it because it doesn’t harm them or the environment.” 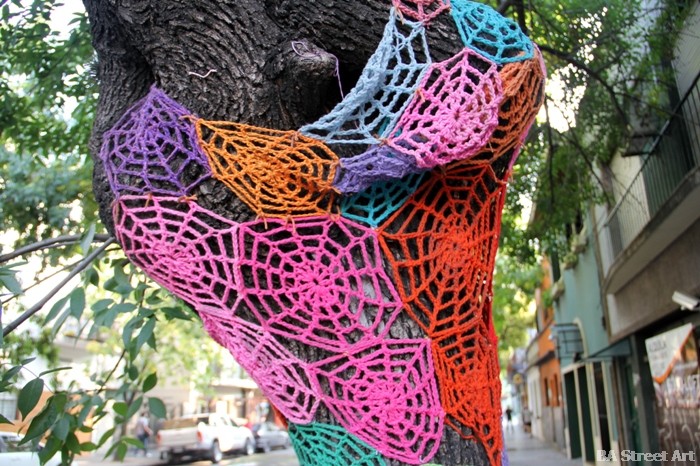 There are also numerous variations in the ‘cozies’ Licia weaves including flowers such as the Dahlia and perhaps the most stunning creations are her coloured cobwebs. Hungarian artist Bakukatorium hit the headlines for her amazing rainbow spiderwebs. Licia is incredibly knowledgeable about the yarn bombing movement and said she contacted Bakukatorium before making her own cobwebs. “Bakukatorium uses all the colours of the rainbow with her spiderwebs climbing up trees. I asked her for permission before dressing the tree outside Voltaire as people will say I copied her. She told me it’s great what we’re all doing and ‘spreading colour all over the world’. 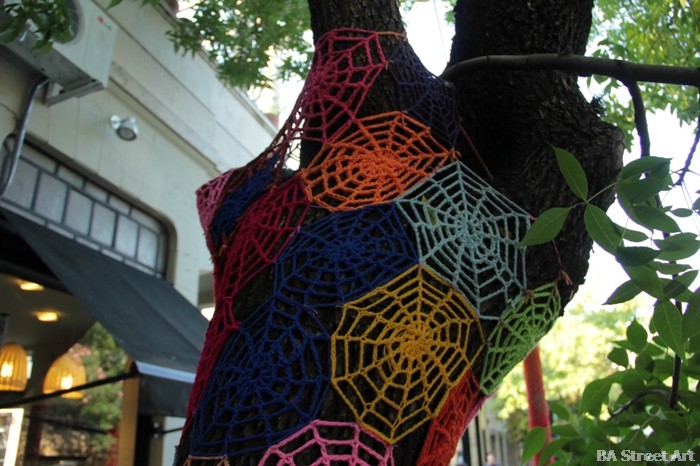 Licia, 57, runs her company Knitting Baires by herself and also works in a hotel to make ends meet.  She revealed that she has had numerous requests to create her artworks from large and multi-national companies and says it is something she has to consider carefully . “I want to make the colours how I want,” says Licia. “Of course it would be nice to earn more money but there is also a lot of compromise and I want to do this by myself as my art.” 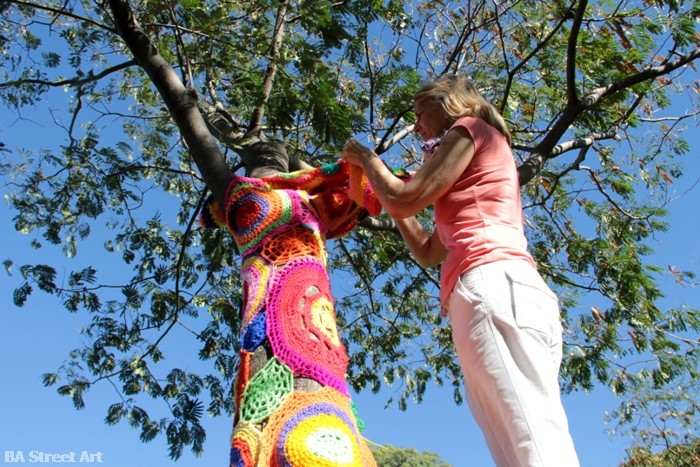 These ‘ecological graffitis’ can be found in numerous ‘barrios’ including Palermo, Colegiales, Villa Crespo and Caballito. Lucia Dueñas and Lucia Pouchan of Nasuco Design celebrated international Yarn Bombing Day last year with interventions in Parque Rivadavia. And Licia says the yarn bombing trend is spreading in Buenos Aires. “More people are doing it, it’s inevitable,” says Licia. “Apart from being good for the environment, it’s aesthetic, beautiful and simple and the colours bring you so much happiness.” 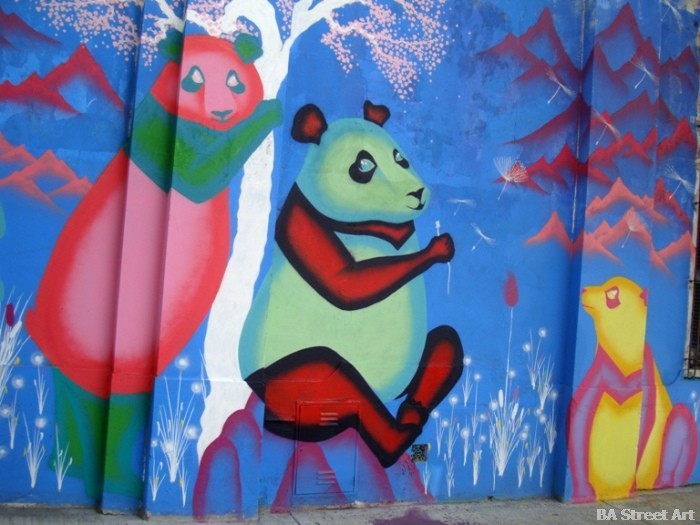 END_OF_DOCUMENT_TOKEN_TO_BE_REPLACED

Zumi was back in Buenos Aires a couple of weeks ago and finally finished her amazing designs featuring five Giant... 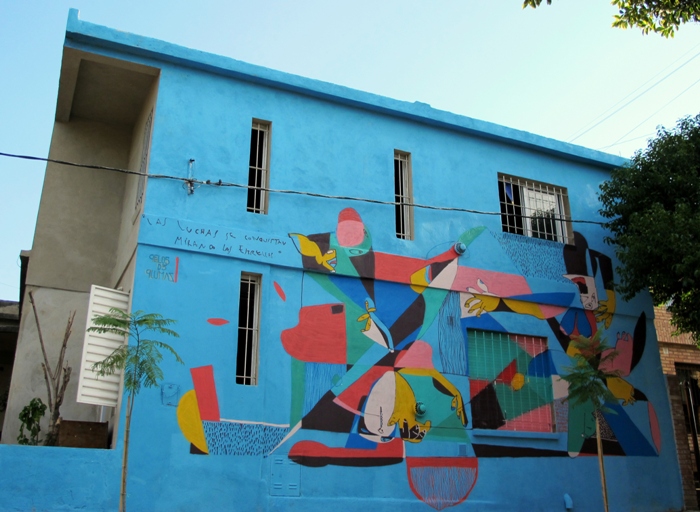 END_OF_DOCUMENT_TOKEN_TO_BE_REPLACED

Pelos de Plumas has painted a new mural in Córdoba remembering Carlos Fuentealba. The teacher and union activist from Junín...