The neighbourhood of El Cabanyal in Valencia has some great street art and is well worth a visit. Photos by Matt Fox-Tucker of Buenos Aires Street Art.

El Cabanyal is a working class neighbourhood on the outskirts of Valencia that was once a fishing village. Its characterised by its charm, crumbling buildings decorated with ceramic tiles and proximity to the beach. Its name is derived from the complex of barracks along the coast where the fishermen once used to live.

In 1993, El Cabanyal was declared a site of cultural importance and from 1998 the neighbourhood was threatened by a government project to demolish more than 1,650 houses, including many centuries-old dwellings, to make way for a new avenue along Avenida Blasco Ibáñez. Residents had to survive threats of eviction and the demolition of their homes before a campaign led by local activists managed to block the plan in the courts.

Argentine-born artist Hyuro painted this mural on a wall that would have been one of the first to be demolished if the project had gone ahead. It deals with the clash between conservation versus modernisation.

Visiting El Cabanyal at the end of 2019, I was lucky to check out a stunning new mural by Italian artist Ericailcane during the VLC Urban Festival Barris en Moviment.

This artwork by Ericailcane appears to show moths catching fire after flying into a flame ascending out of a chimney. It can be found on the corner of Calle del Progreso and Calle de los Pescadores. Collaboration by XLF Collective including Nemo, Julieta XLF and Barbi

A mural by the XLF Collective refers to ‘Passat’, Present and ‘Futur’ also drawing attention to the plight and situation of families living in the area who have been faced with eviction or finding new homes due to rising house prices. A second mural by Ericailcane featuring a boxing cat wearing a championship belt that includes the inscription “A la intemperie” ‘(To the elements’). Perhaps referring to the struggle of the local residents against the government plans to bulldoze the ‘barrio’. Mural by Spanish artist Concreto at on Calle Jose Benlliure

In the last few years, El Cabanyal has become a hotspot for street art and graffiti thanks to some urban art festivals including Poliniza Dos organised by the Polytechnic University of Valencia inviting international and local artists such as Hyuro, Fran Bosoletti (Argentina) and Lula Goce (Barcelona) to paint murals here. 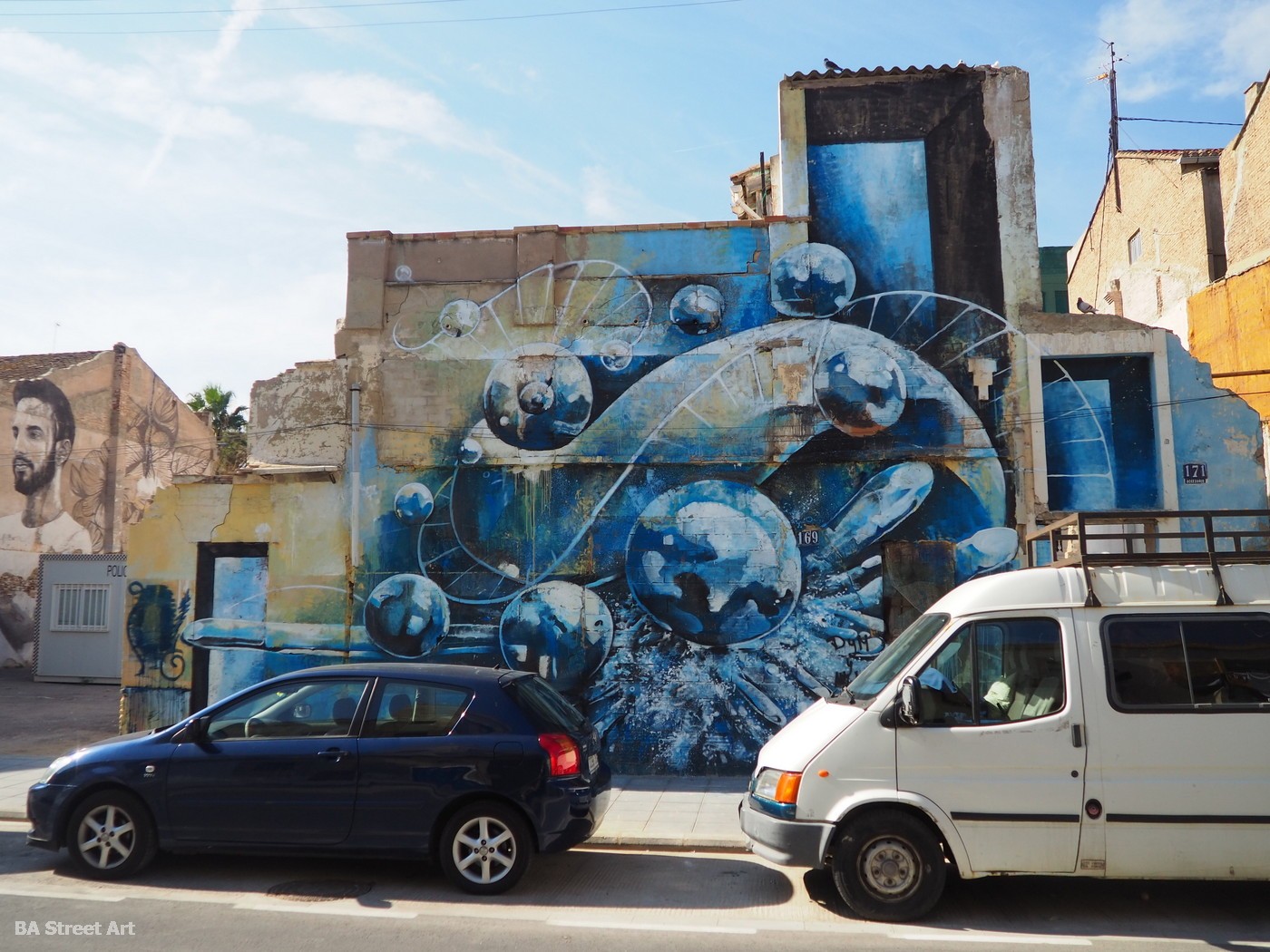 Mural by Lolo relating to fishing on Avenida Blasco Ibáñez

Some artists like Lolo have chosen to reflect the history of El Cabanyal in their stencils and designs.

Lettering with name of the neighbourhood and social housing in Cabanyal

Some parts of the neighbourhood still feel neglected including this huge social housing complex located a few blocks from the beach. Graffiti by Dime, Freskales and Soezes in an abandoned lot

The first edition of the urban art festival VLC Barris en Moviment in 2016 saw murals relating to gender equality painted in the neighbourhoods of Grau as well as Cabanyal. This artwork by Nena Wapa Wapa in Plaza de los Angeles features two children with a wheelbarrow and a giant key in it plus a series of cages with a bird escaping. 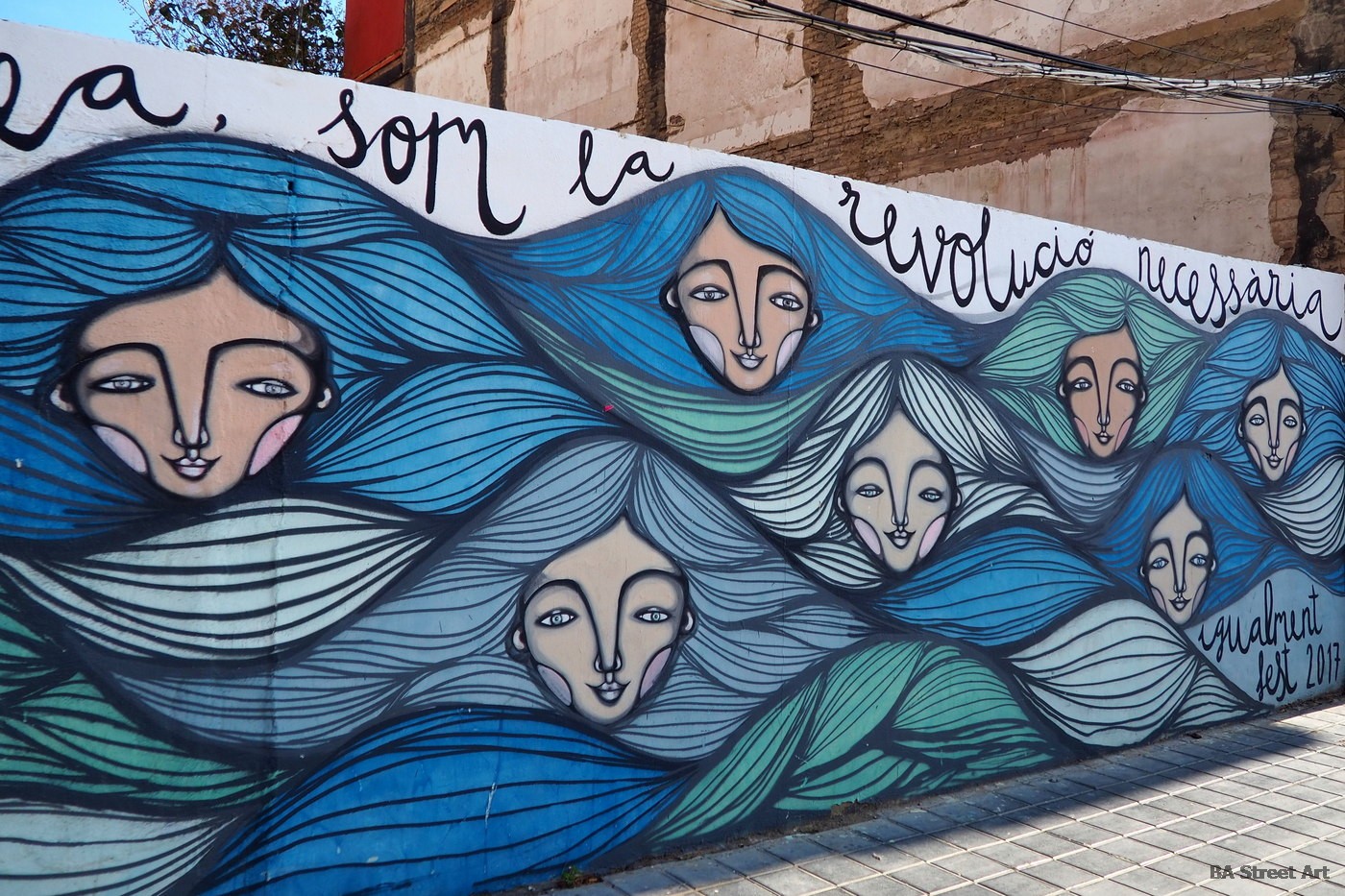 Iris Serrano painted a mural during Igualment Fest 2017 with the phrase “Som marea, Som la revolució necessària. (“We are the tide. We are the necessary revolution”.) Mural by Lyly painted in October 2019 Along and around Calle de Sol there are also a number of cool but smaller artworks including one by Toni Espinar with the message “Love is Respect” as well as a window decorated with gnomes featuring a landscape and woodland.

To see our guide to the best street art in other parts of Valencia including the city centre, old town and El Carmen click here 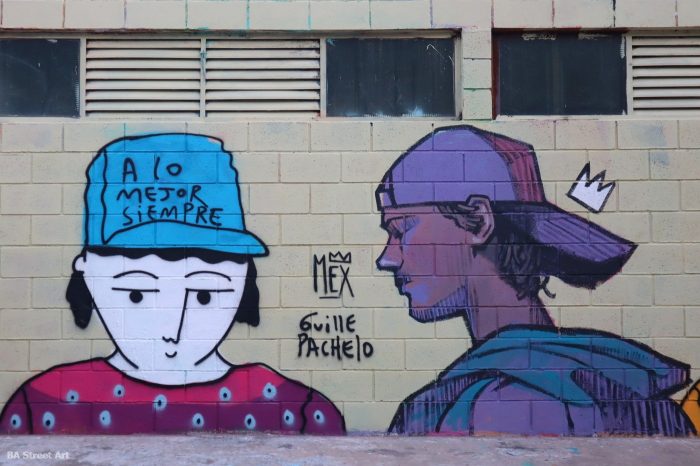 END_OF_DOCUMENT_TOKEN_TO_BE_REPLACED

Guille Pachelo and Mex teamed up to paint some new artworks together at Mercado de Pulgas in Colegiales. END_OF_DOCUMENT_TOKEN_TO_BE_REPLACED

New murals in Buenos Aires by Detour with Corona

Detour was in Buenos Aires last month and completed these two new murals with Corona in Palermo and Villa Crespo.