Incredibly, Lean’s painted more than a dozen giant portraits on the streets of the Capital Federal inspired by Eva, an international flamenco dancer. “Eva goes to the U.S.A. and Europe a lot, and many times while she’s away I paint a mural as a present,” says Lean. “Why do I paint her naked? First of all she’s always liked doing it and I can also get her to pose for me easily. Her face has a shape that is really harmonious. Not all faces are like that but with hers it’s so easy to follow when you draw. I’ll have more or less an idea what I want to do, I’ll ask her to sit for me and a few minutes later I have the sketch that I need.”

Under the bridge: Eva in Belgrano

Each of Lean’s murals depicts Eva in a different pose with different coloured hair. But what does Eva think about her boyfriend painting her in such a provocative manner and what’s her reaction when she sees her portrait in the street? “Eva really likes to see herself up on the wall and when she can, she comes along with me when I’m painting and keeps me company,” says Lean. “However, she gets quite worried because she always arrives just before the artwork is complete. I know what the mural is going to look like when it’s finished but no one else does, so she’s always a little bit scared that it’s not going to look quite right.”

It’s not all about Eva, Lean has painted murals of half a dozen other different female models. Why does he paint murals of these women? “To me they relate to a woman’s beauty,” says Lean. “Women are beautiful and for me painting has to be beautiful. There’s a concept of beauty that I have in my head that defines a woman, her shape, her manner, everything, it’s all there. Guillermo Roux is a well-known muralist and painter here in Buenos Aires. He’s 82-years-old and he says that ‘beauty is for everyone’.”

And the question of the ‘chicas’ with the chains and piercings. “They are a little more sexually aggressive,” says Lean. “Often they are plays within an image. First of all I like them and they remind me of things that I like and when I paint chains and these types of things they can help draw attention to certain parts in the image that interest me or I’d like to point out.”

Controversy: Lean with his self-censured artwork

Lean isn’t worried if his artworks sometimes cause offence and he even decided to self-censure one of his own murals entitled ‘Red Hot Riding Hell’, which showed a dog performing oral sex on a semi-naked woman after a neighbour called a TV channel and a radio station to complain. “Do I think my paintings are too explicit? Of course not. For me painting has to shock. It has to surprise the person who sees it and has to make things happen,” says Lean.

Going back to Lean’s ladies… “I like to paint sexy women, I like what happens when people see the murals, their reactions, the good and the bad, “says Lean. “I believe that sex is the freedom that we have, if there’s no sex, your head gets messed up and you can become withdrawn. This is what sex is, not naked flesh, not pornography. You can paint pornography on a canvas as a work of art but no one is being forced to look at it.” And does Lean think his artwork is in any way dirty? “I think that nudity is part of the language of art since it began.”

While building a successful career designing sets and creating artistic concepts for advertising, television and cinema, Lean is a relative newcomer to the street art scene. After studying stage design at Teatro Colon with well-known street artist Jaz among others, he only started painting in the street five years ago. His first mural was a collaboration with Jaz and his close friend Emy Mariani in 2006.

Lean’s first mural in the street with Jaz

There’s much more to Lean’s fascination with naked ladies than meets the eye. Anyone who has tried drawing or painting will know that the human anatomy is one of the hardest things to recreate accurately on canvas. Lean took live drawing classes once a week for two years at the Fernando Fader Art School in Flores and it helped him to understand and draw the human body in its correct proportions. 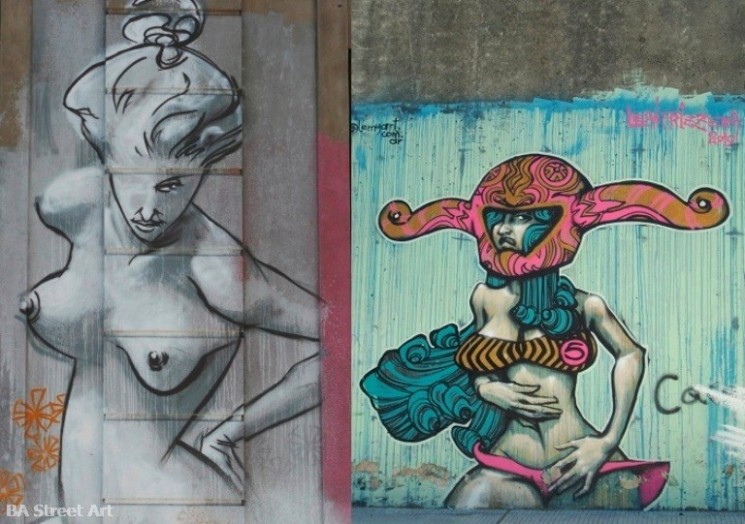 Learning to capture the female form

All the bold lines in his murals, Lean paints with a brush and he says it gives him the dynamic to create the movements of the cascading hair and curves on the bodies of his voluptuous women. ” The great thing about the female body is that it offers everything you need to work with as an artist,” says Lean. “It’s difficult to draw the human body but it’s practice and more practice, that’s the way.”

Lean’s influences come from all different walks of life. His father is an architect, he’s played the drums since he was a youngster and is into heavy metal and punk music, and names the Red Hot Chili Peppers as one of his favourite bands. Skate, traditional graffiti and tattoo have also had an impact on his artwork.

Lean paints many of his murals with Emy Mariani and says the two have a great working relationship. “Not only is Emy my friend but we understand each other in the concept of our work, what we want to do and what we need to do to achieve it.”

Lean and Emy’s designs in Monserrat

Lean describes his style as a fusion between graffiti, classical painting and in particular Arte Nouveau. He names Alfonse Mucha as one of his greatest influences along with Gustav Klimt and Egon Schiele.

One of Lean’s recent projects with Emy was a mural at Central Cultural Recoleta, and like some of their latest artworks it has a more textured feel using a lot of gold paint. And Lean says it’s something he and Emy have been experimenting with. “We come up with the sketches together and generally choose the palette of colours from a painting we like. This painting I would say is closer to Klimt in terms of the the tones. Gold has this facility to allow you to work with the light in a different way. So at night, the painting has a different depth and feel about it with the way the light reflects off it.” END_OF_DOCUMENT_TOKEN_TO_BE_REPLACED

Blu has been busy over the last few weeks and his amazing artworks in Buenos Aires just keep on coming.... 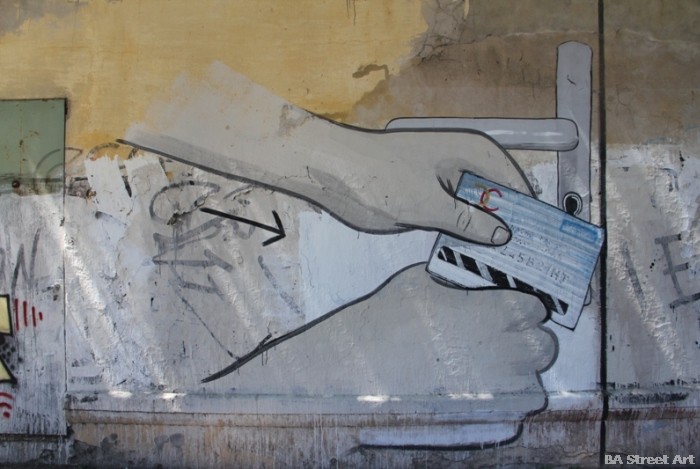 END_OF_DOCUMENT_TOKEN_TO_BE_REPLACED

Here’s a great new mural by Escif and Blu explaining how to open a door with a credit card in...