Thousands of people and militants have been remembering Néstor Kirchner today exactly one year after he died aged 60 following a heart attack. Muralist Marcos Catuares painted a new portrait of the former president in Plaza del Congreso on behalf of the political group ‘Segundo Centenario’ to mark the occasion.

A bronze statute of Kirchner created by plastic artist and sculptor Omar Gasparini was also on show in front of the Palacio del Congreso this morning.

The statue was later carried by the miners of Río Turbio in a procession to Plaza del Mayo followed by members of the public, Kirchnerist groups, militants and party supporters.

Catuares also painted another mural of Kirchner in Plaza de Mayo in April to coincide with the sixth month anniversary of Kirchner’s death. Accompaning the portrait is the phrase ‘La vida por su pueblo’, meaning ‘Your life for your people’.

Thousands of political posters and graffiti depicting president Cristina Fernandéz de Kirchner and her late husband have also popped up all over the city, as well as more graffiti tributes by political groups.

A number of murals have the phrase KV, an abbreviation for ‘Kirchner Vuelve’ meaning ‘Kirchner will return’. END_OF_DOCUMENT_TOKEN_TO_BE_REPLACED

Latest mural by Malegria in Palermo

Malegria has finished a new mural in Palermo outside the Espacio Centro Cultural Bonpland. 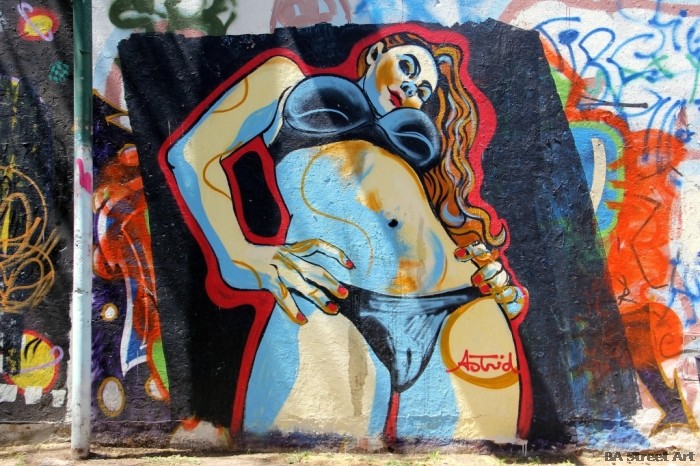 END_OF_DOCUMENT_TOKEN_TO_BE_REPLACED

Astrid has painted a new mural in a park in Parque Patricios. The design also features frogs having sex and...