Tecnopolis, the science, technology and art show opened in Villa Martelli in the Province of Buenos Aires on Friday. The 60 hectares site has dozens of pavillions dedicated to subjects such as Earth, Fire, Air and Water. Street artists Martin Ron, Lean Frizzera, Emy Mariani and Diego Cirulli have painted a series of murals in Plaza de la Memoria. And the exterior of a former warehouse building, that has been converted into a performance space, has been decorated by some of Buenos Aires’ best-known artists including Jaz, Ever, Mart, Roma, Tec, Triangulo Dorado and Nazza Stencil. Nazza Stencil ‘ Fight by other means’ 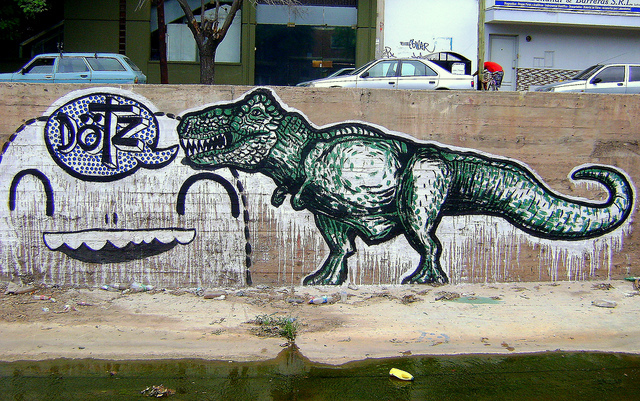 END_OF_DOCUMENT_TOKEN_TO_BE_REPLACED

Argentina is renowned as one of the best places in the world to find dinosaur remains with famous fossil sites... END_OF_DOCUMENT_TOKEN_TO_BE_REPLACED

Anniversary of bombing of AMIA marked by mural

A ceremony was held today at the site of the AMIA building in Buenos Aires where on July 18, 1994,...