Argentina is renowned as one of the best places in the world to find dinosaur remains with famous fossil sites in Salta, San Juan, Neuquén and Patagonia. And the world’s biggest-known dinosaurs is aptly named the Argentinosaurus. It’s been millions of years since dinosaurs roamed the earth but it seems giant flesh-eating lizards such as the Tyrannosaurus Rex are back thanks to Argentine street artist Dötz from Santa Rosa.

When dinosaurs roamed the streets
Why do you like painting dinosaurs?
Because I like them aesthetically and a while ago I was looking for something to paint on a big scale. The impact they generate when you come across them in the street is great. 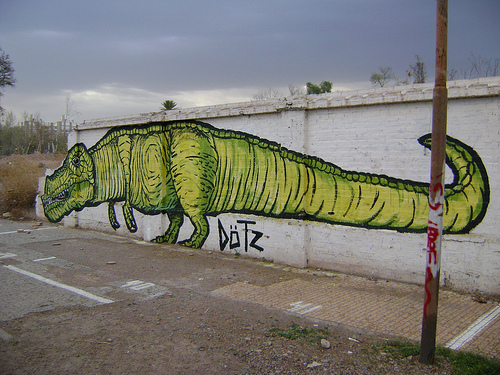 Dinosaurs were once kings of the earth. What do they mean to you?
Dinosaurs have always intrigued me. Just thinking about the fact that they lived where we are living now is crazy.

Do dinosaurs have any special memories for you from your childhood?
I have a memory from when I was a kid that they were making excavations in the main square in Santa Rosa where I was living. They found the remains of a Glyptodon and it left a big impression on me. I also remember looking at an image in an illustrated dictionary where they dedicated a whole page to the word paelentology, which was full of dinosaur skeletons.

You painted a dinosaur at Street Arte BA. It’s a T-Rex?
Yes. It’s a T-Rex, one of the biggest and most terrifying carnivores that existed on the planet. 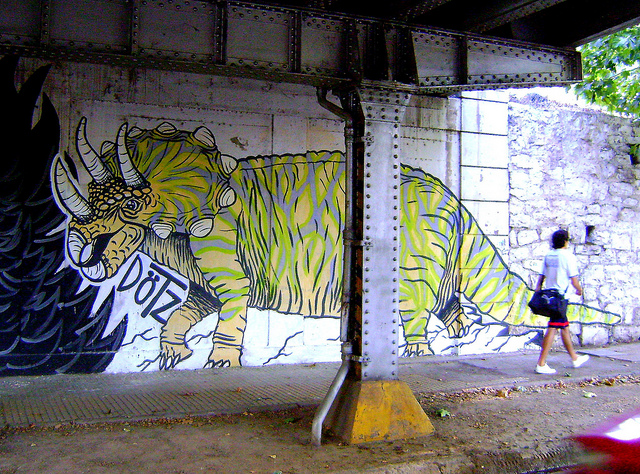 Triceratops
What other types of dinosaurs have you painted?
Up to now I’ve painted the Tyrannosaurus Rex, Triceratops, Pterodactyls and the Brontosaurus.

Terracesaurus Rex
You’ve painted dinosaurs in Buenos Aires. Whereabouts?
I painted a T-Rex in the barrio of San Cristóbal on the terrace of a design studio, two T-Rexs and a Pterodactyl in Mar del Plata and a Brontosaurus in La Plata.

Have you painted them in other parts of Argentina or abroad?
In Santa Rosa (capital of La Pampa Province), La Pampa and in Mendoza and I’m planning to go to Europe soon and I hope to paint something there.
flickr.com/photos/dotzart/
Previous Reading 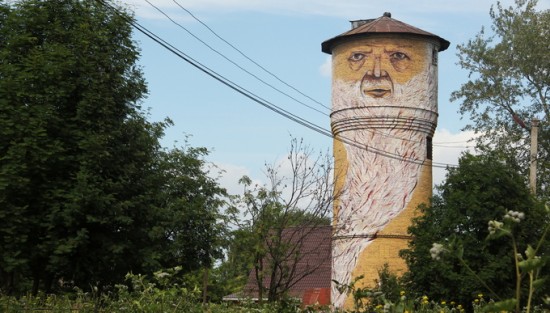 END_OF_DOCUMENT_TOKEN_TO_BE_REPLACED

'Tower Man' by Nomerz in Russia

END_OF_DOCUMENT_TOKEN_TO_BE_REPLACED

Tecnopolis, the science, technology and art show opened in Villa Martelli in the Province of Buenos Aires on Friday. The...