Some of Latin America’s best know street artists have breathed new life into a disused former oxygen tank factory in one of Buenos Aires’ roughest neighbourhoods. 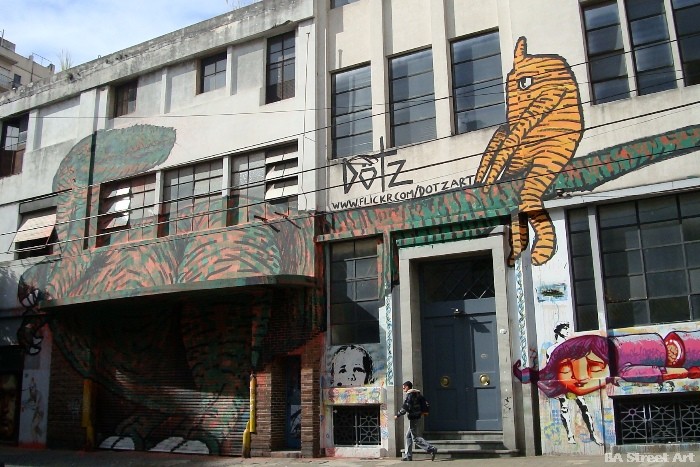 More than just a facade: designs by Dotz, Ice, and earlier stencils by Cabaio Stencil and Stencil Land

More than 30 artists including Ever, Grolou, Ice, Jaz, Mart, Nerf and Poeta joined forces for the sixth Street Arte BA event to transform the building along Boulogne Sur Mer in the barrio of Once into an ‘art factory’.

The art foundation Fundación Rozenblum granted event organisers Street Arte BA permission to use the premises. And funds for the festival, including the costs of materials and a designer were raised by a party with DJs held before the event.

Organiser Katrin Richter said it was the most successful Street Arte BA event ever: “The challenge was to show the world that with few resources and a lot of people we can make the place as beautiful as possible. There was a vibe of creativity and everyone was motivated and happy to be painting. There was a really positive energy to do something special and everyone has created something beautiful.”

Over three days, each of the artists has dedicated themselves to painting different parts of ‘la fabrica de oxigeno’ inside and outside. On the top floor, a giant pig with antlers and many legs painted by Frederico Calandria covers one of the walls resembling one of Richard Scarry’s cartoon characters. On the wall opposite, a woman painted by Sordi is holding a dragon-like creature, and the door and tables are covered with voluptuous women painted by Astrid in a style not too disimilar to Toulouse-Lautrec.

In the courtyard, Tomás Gómez from Rosario has created a wall of stencils dedicated to legends from music and art including John Lennon, Mick Jagger, Kurt Cobain, Bob Marley and Salvador Dali. Designs by Mako Fufu and Ignacio Latorre decorate one of the walls and the architrave of the balcony above. By the staircase is a neon creature by La Wife, and another female artist LuNa has turned an old car into a psychedelic love machine of bright colours.

In the basement, Ever, Jaz, Mart, Nerf and Poeta have brightened up the walls in their own unique styles with many of the artists working late before the opening on Saturday.

And hidden further away in the bowels of the building are more artworks including an owl by Ice and a series of colourful characters peering out of the shadows.

The site of Oxigena is just two blocks away from Ciudad Cultural Konex, another converted factory that is now a cultural centre hosting events such as La Bomba del Tiempo. Also around the corner is the railway station Estación Plaza Miserere that faces the barrio’s main square where you are more likely to come across prostitutes (yes, I have been approached on two occasions!) and homeless people. So Street Arte BA in its humble surroundings certainly lives up to its billing ‘El arte en la calle versus la calle en el Arte’, sticking two fingers up at the showy ArteBA exhibition put on by the city government in the rather more chic neighbourhood of Palermo.

After finishing decorating the main facade of the building with girlfriend Blu Shei Wei, French artist Grolou even had time to knock on the door of a local business and paint the shutters with one of his growling cats. The streets of Once are definitely in need of a facelift.
Photos BA Street Art and © Vittoria Izabella Daelli