Today is the 70th anniversary of the death of María Eva Duarte de Perón, more commonly known as Evita, who died of cancer aged 33 on 26 July 1952.  Photos by Buenos Aires Street Art of murals, stencils and political propaganda around Buenos Aires featuring Evita.

We were wondering about the origin of the signature song Don’t Cry For Me Argentina and who was the real Eva Perón?

The song was of course immortalized in the hit musical Evita by Andrew Lloyd Webber (1976), and later turned into the movie starring Madonna and co-written by Alan Parker, Oliver Stone, Lloyd Webber and Tim Rice. Not long after Parker’s movie came out in 1996, Argentine director Juan Carlos Desanzo released his own film biography of Evita called Eva Perón: The True Story. The two film portrayals of Eva are so contrasting, it’s as if they depict two different characters. So which version of Evita is the most accurate?

The song lyrics in Don’t Cry For Me Argentina are openly critical of Eva and her penchant for designer clothes and jewellery with lyrics such as: “All you will see is a girl you once knew. Although she’s dressed up to the nines. At sixes and sevens with you.” Parker’s production is extremely lavish with Madonna holding the record for the most costume changes in a movie – an estimated 85 times (including 39 hats, 45 pairs of shoes and 56 pairs of earrings). 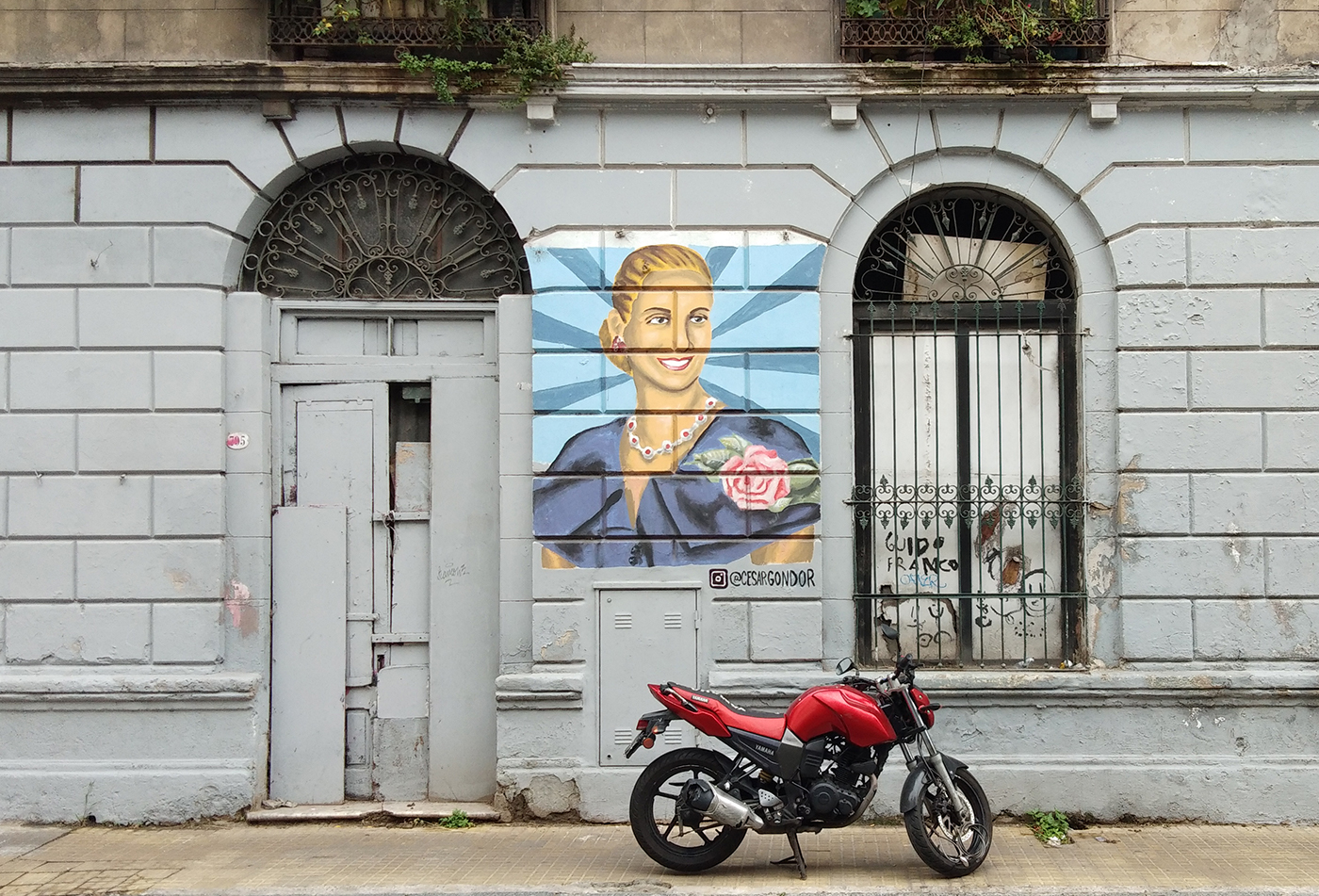 Another song entitled “The Money Kept Rolling In (And Out)” refers to Eva’s charitable work and allegations of money laundering, while also implying that she cultivated a glamorous image to impress the poor people of Argentina and to help promote Perónism. Another song (“You Must Love Me”) suggests that it’s only when Eva realises that she’s dying from cancer does she renounce her pursuit of the vice-presidency and realise that Perón loves her for herself with the words: “How can I be of any use to you now?” 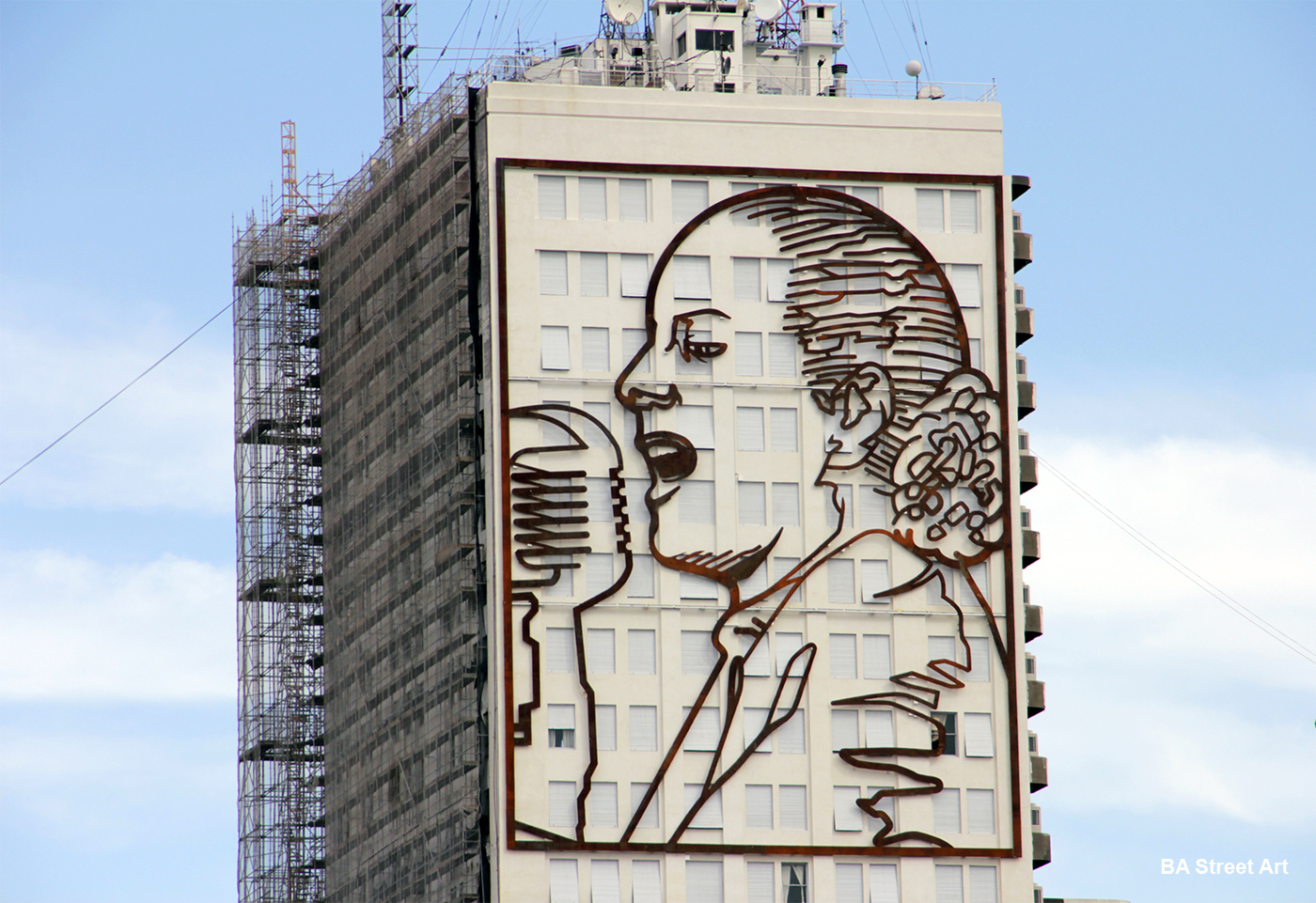 Desanzo’s film, though much lower budget, focuses on Eva’s political career and last years. It portrays her as a brave, charismatic. passionate woman, and a champion of women’s and workers’ rights. The Eva of Desanzo is conscious of her roots, she is a sensitive, tearful woman with a human touch, holding babies and hugging pensioners (almost makes you want to vomit!). The movie was released while Carlos Menem’s government was in power and is perhaps the reason why there is no shortage of Perónist propaganda.
Esther Goris, who plays Eva, gives a rousing speech at a school that includes the frequent use of the words ‘Peronista’ and ‘Peronismo’ before she had even met her future husband. There is also a scene when she meets Juan Domingo Perón for the first time at Luna Park and flatters him saying that the people call him ‘Colonel of the people’. 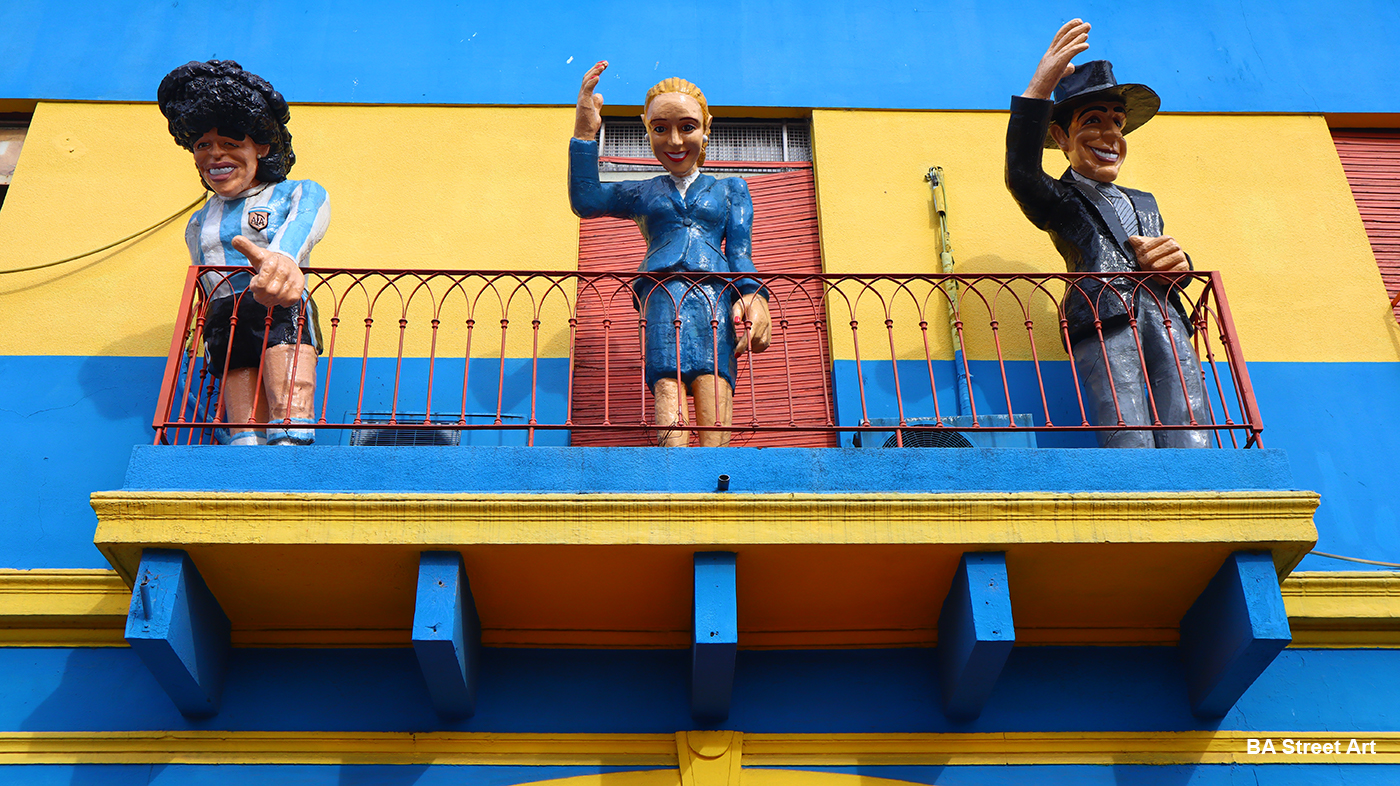 A new TV series called Santa Evita on the channel Star+ airs tonight based on the book by Argentine Tomás Eloy Martínez and starring Uruguayan actress Natalia Oreiro. It covers Evita’s life and the moments after her death when her embalmed body was kidnapped by the opposition to her husband’s rule. Judging by the show’s title and that there’s a party in power that calls itself Peronist, the probability is it will portray Eva as Mother Teresa. More fantasy or fact? We’ll have to wait & see! 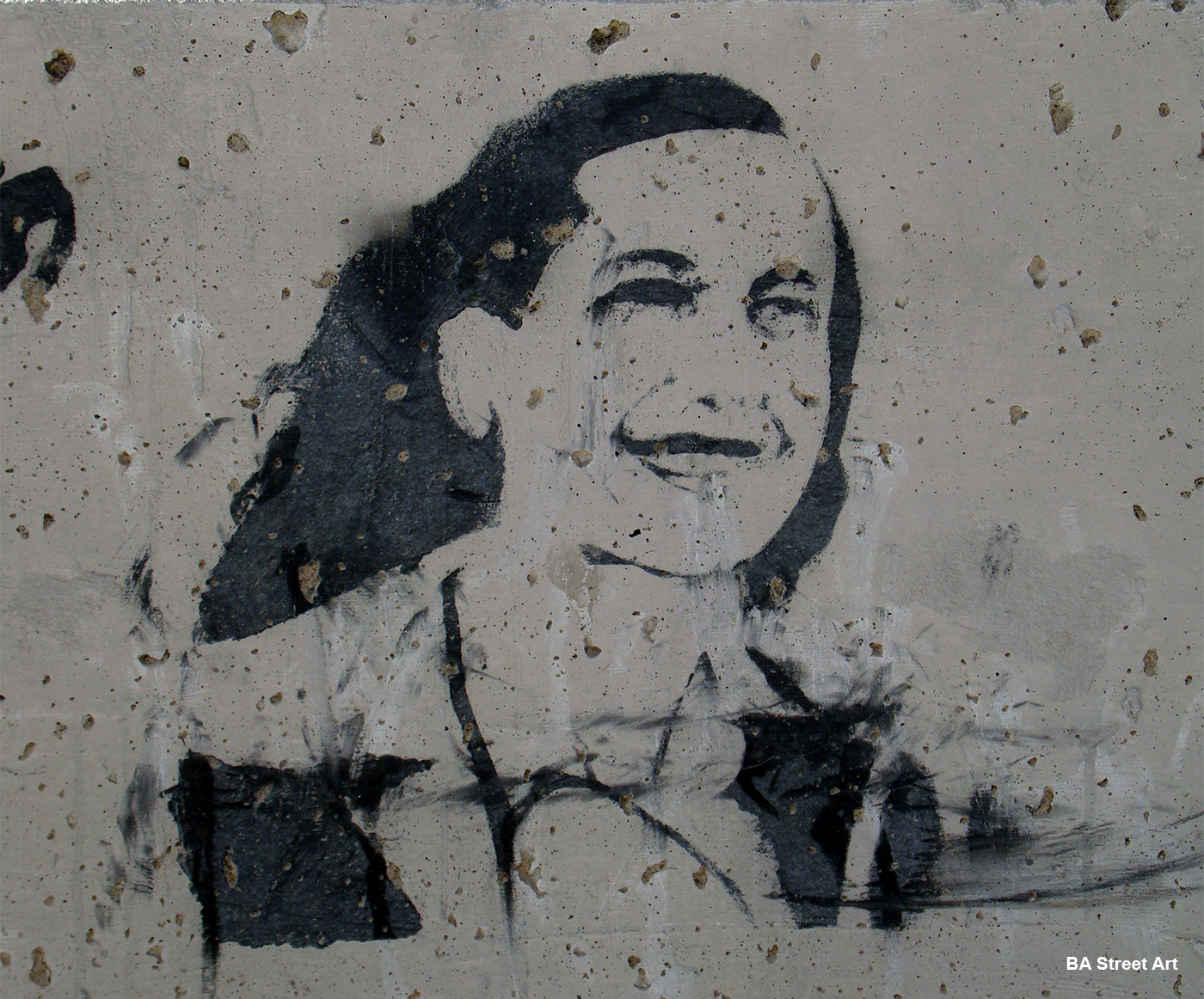 A feature entitled ‘Eva Peron The Myth’  in La Nación newspaper unravels her legacy: “She lives on as a myth with her unique personality that is constantly associated with all political solidarity. Insolent, sarcastic, spiteful, with a natural elegance that chose Coco Chanel when she was advised not to overdress. Born with a thirst for power, she came from humble origins with her surname in dispute (her birth certificate read Duarte while her baptismal certificate read Ibarguren) and achieved a great death that shook the world like a Greek tragedy. Her death was like that of a saint despite the fact she didn’t belong to a religious order.” 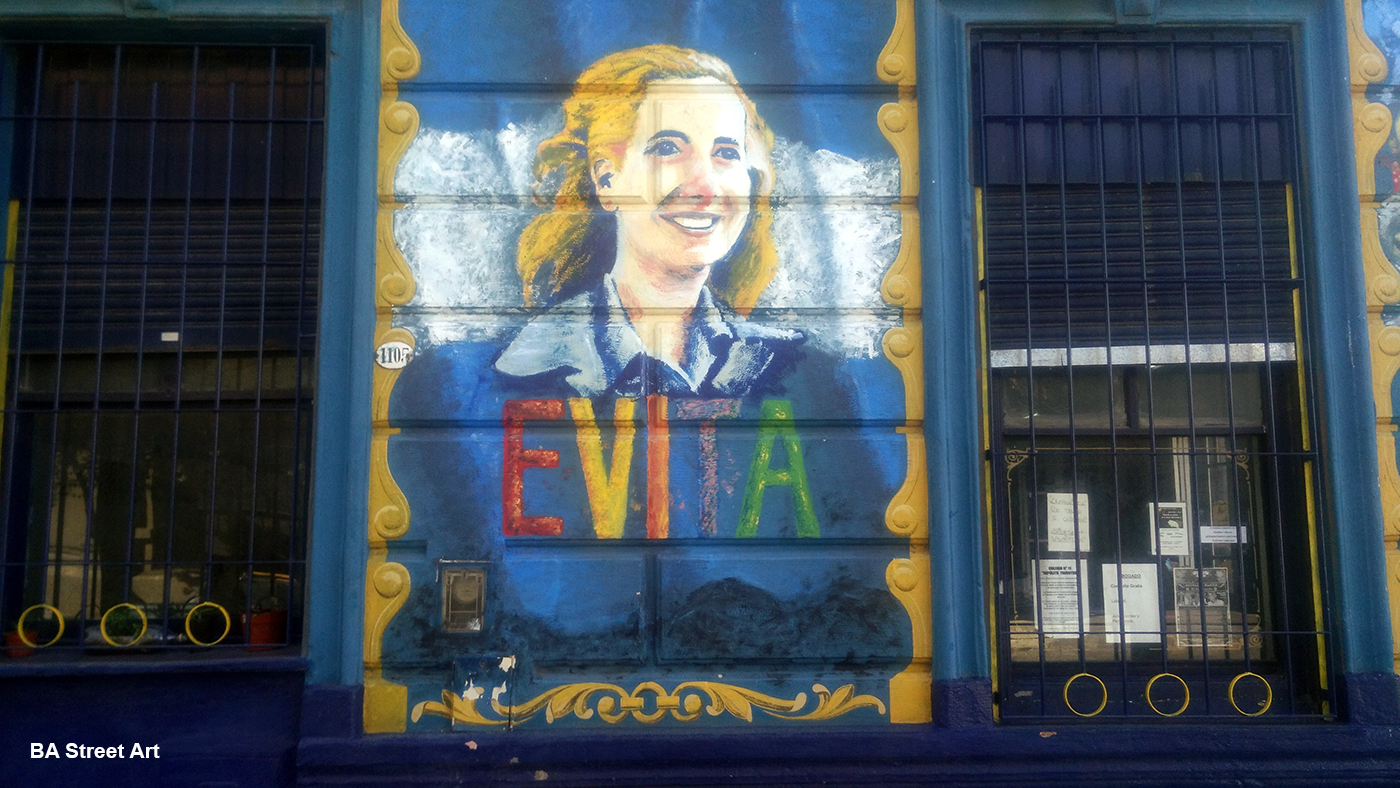 Evita also founded the Women’s Branch of the Perónist Party and created the Eva Perón Foundation through which schools were built, nurses trained and money dispensed to the poor. La Nación commented: “The poor people started to revere her like a Mother Teresa with French tailors.” 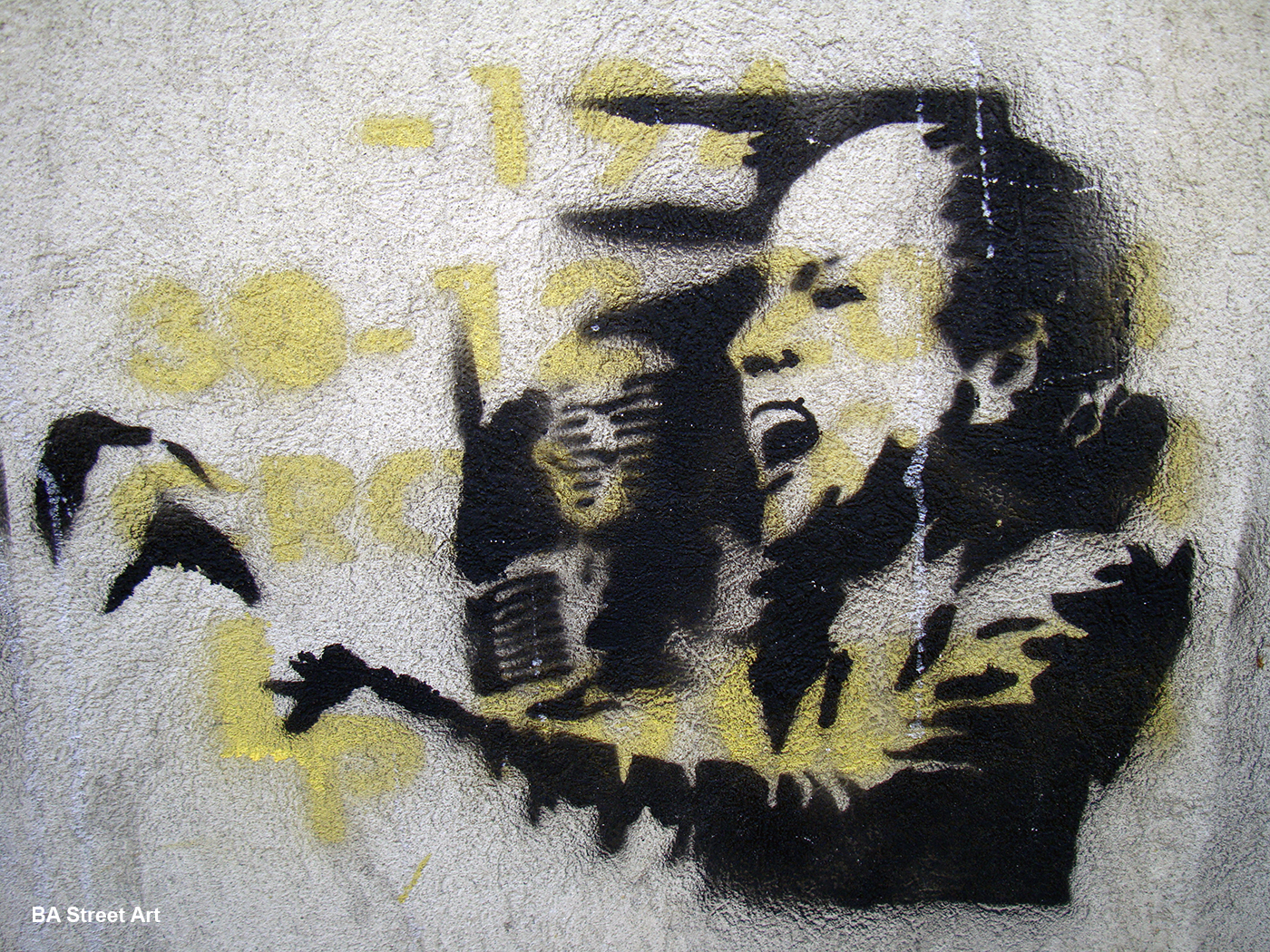 Perón and Evita married on October 22, 1945. Eva was aged 26 and Perón was 50. Some people say Eva was using Perón to become rich and famous (maybe cynical but why else marry someone almost twice your age?) And Perón was using Eva to become president and help win the votes of the working class and poor. Her final speech from the balcony of the Casa Rosada, as she addressed ‘los descamisados’ (the shirtless ones) while suffering from cancer, was heartfelt and moving. She hated the rich (la oligarquia) and was demonized by the upper and middle classes who frowned on her for her illegitimacy and promiscuous past. She was a populist ‘with a little bit of Robin Hood’, says La Nación. Above all many common people loved her and admired her. Many of them wept in Plaza de Mayo during her speech with the scenes inspiring Rice’s famous song. 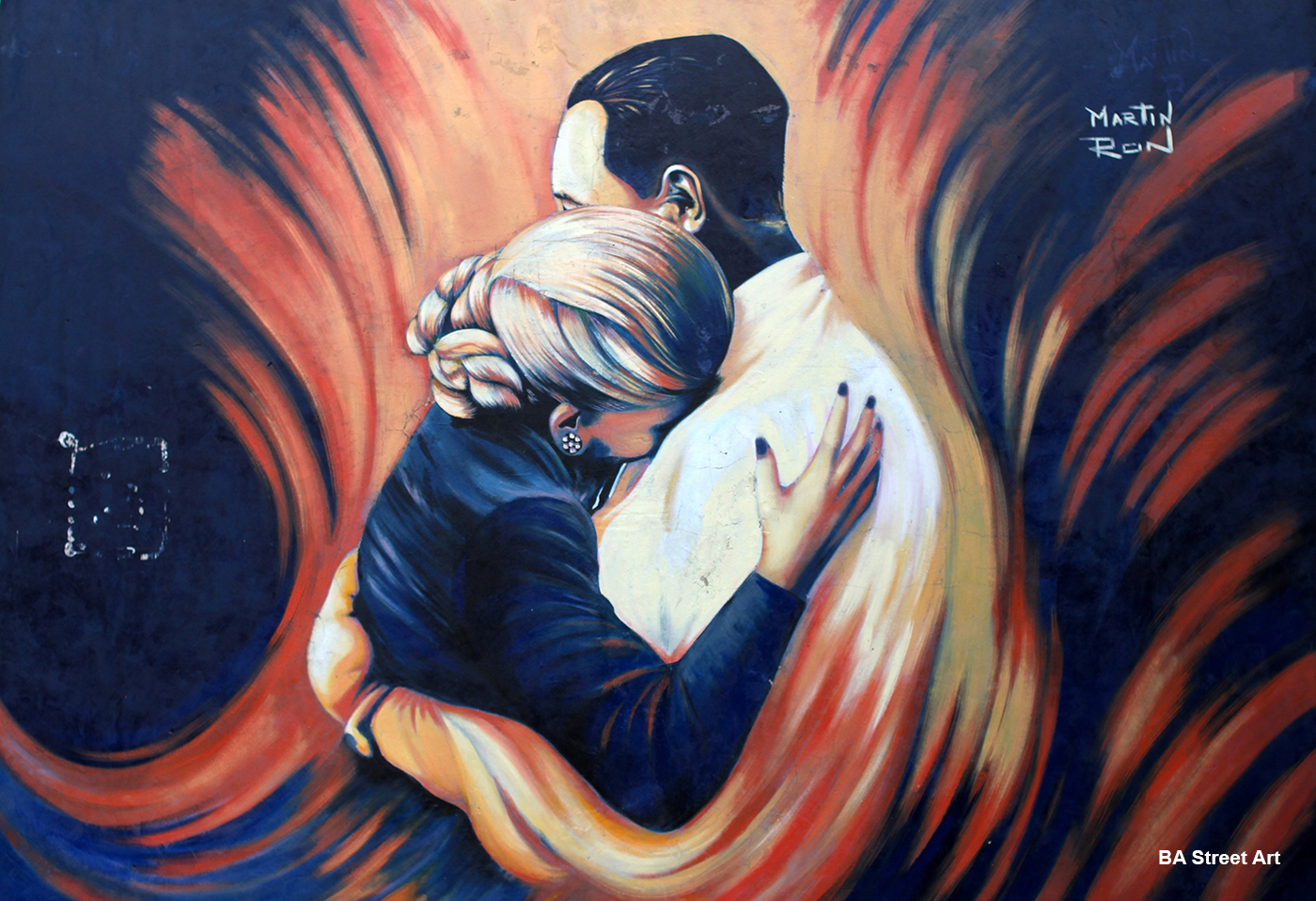 “Eva lost all sense of reality with politics,” her friend Father Benitez said about her last speeches. “She felt the pain of another like her own,” wrote Abel Posse in La Nación. “Eva worked for 20 hours but she only understood the power that power gives. She felt democratic, anointed by ‘the shirtless ones’ but she didn’t respect the rules of a republic that ended up being hypocritical… to feel democratic and a missionary was the intolerance of Eva, the source of her obstinate way of seeing things in black and white.” 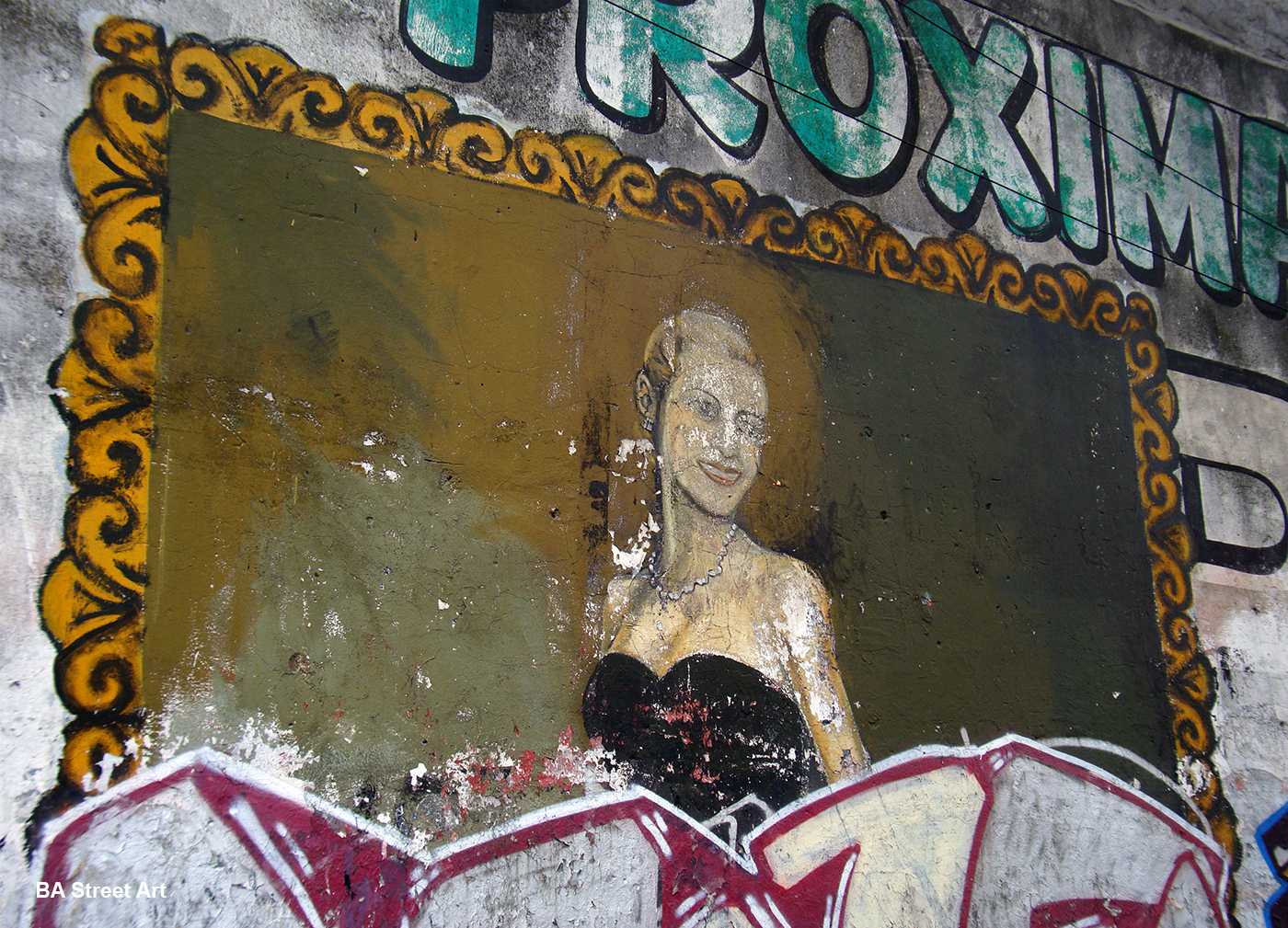 It was thanks to Evita that Perón won the elections in 1946. She was given a state funeral and mourners turned out in their millions to pay their respects. So overwhelming was the public outpouring of grief that within one day of her death, all the florists in Buenos Aires had run out of flowers. She was considered ‘the spiritual leader of the nation’, and remains a national hero and icon to millions. Her impact on Argentine politics remains huge and images of Eva can be found all over Buenos Aires along with slogans reading “Evita vive” (“Evita lives”). Like Eva herself, her husband also provokes adulation from his supporters and hatred from his detractors in equal measure. 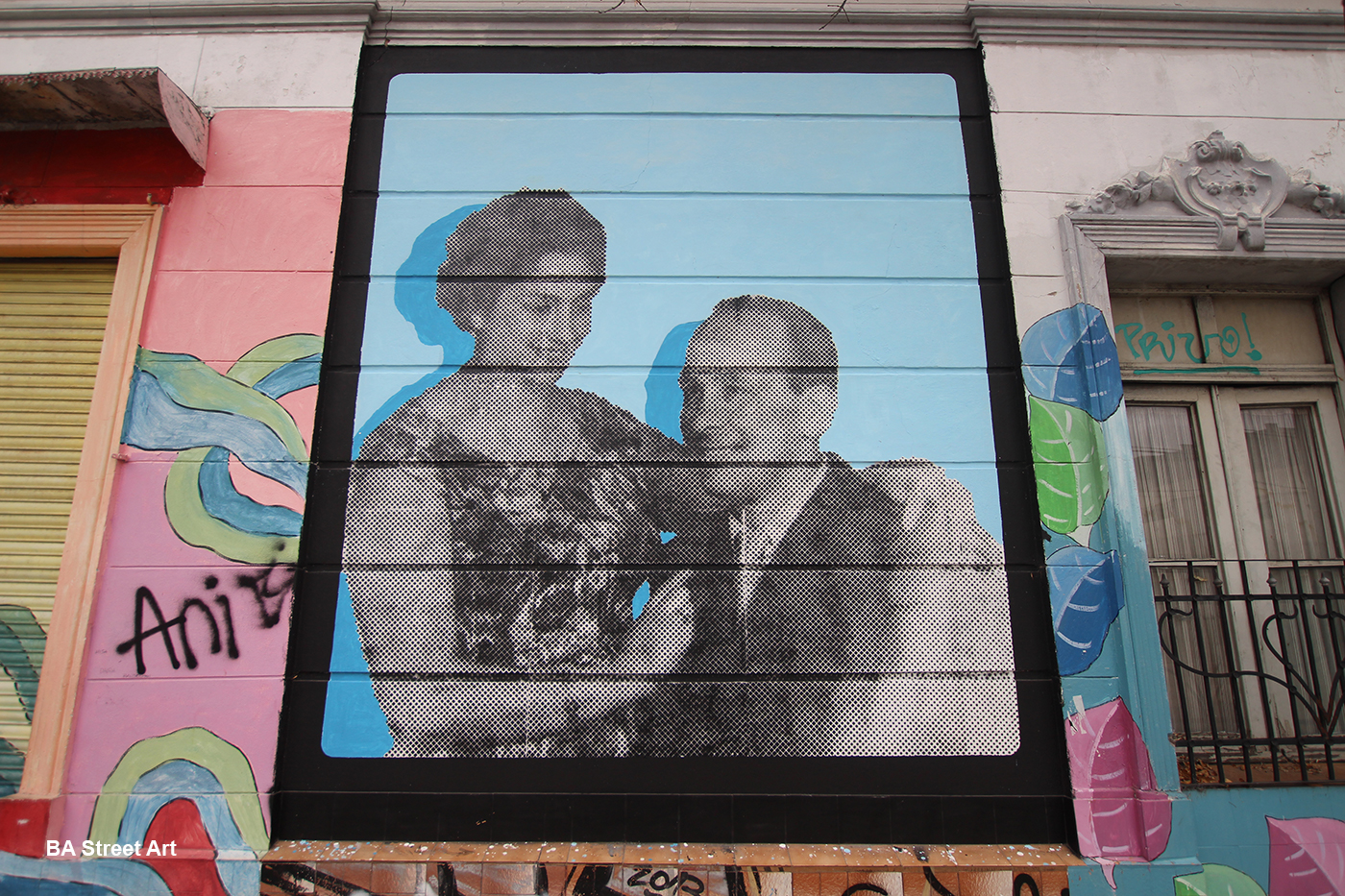 To his followers, Perón and his wife were champions of the poor, the working class and the welfare state. To his critics, Perón was a military general, a fascist leader who admired Mussolini and Hitler; he also helped the sanctuary of Nazi war criminals such as Josef Mengele and Adolf Eichmann in Argentina. His fascist views also saw children’s books promoted in primary schools that included Peronist propaganda like: “Mamá me mima, Evita me ama.” (“Mum cuddles me but Evita loves me”); “Perón es bueno;” (Perón is good”); and “La Fundación Evita da ropa al que necesita” (“Foundation Evita gives clothes to whoever needs them”) designed to brainwash kids. 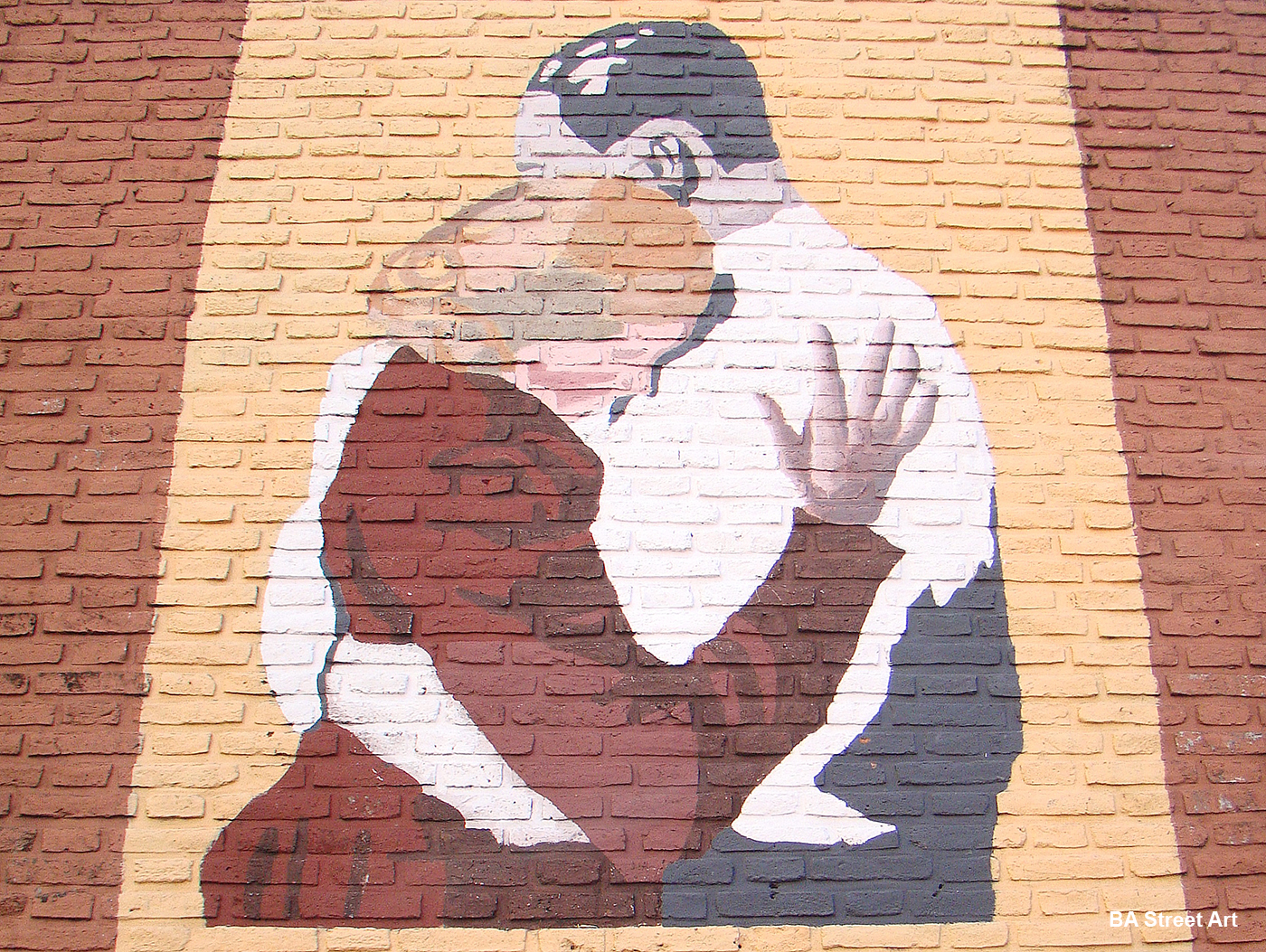 After Evita’s death, Perón’s government also forced state employees to wear black, if they disobeyed, they would be fired. Perón’s also blamed with sowing the seeds of economic and social ruin by encouraging ‘the uneducated and ‘the plain lazy’ to live off state handouts, swelling the number of state employees, printing money and let inflation gallop. 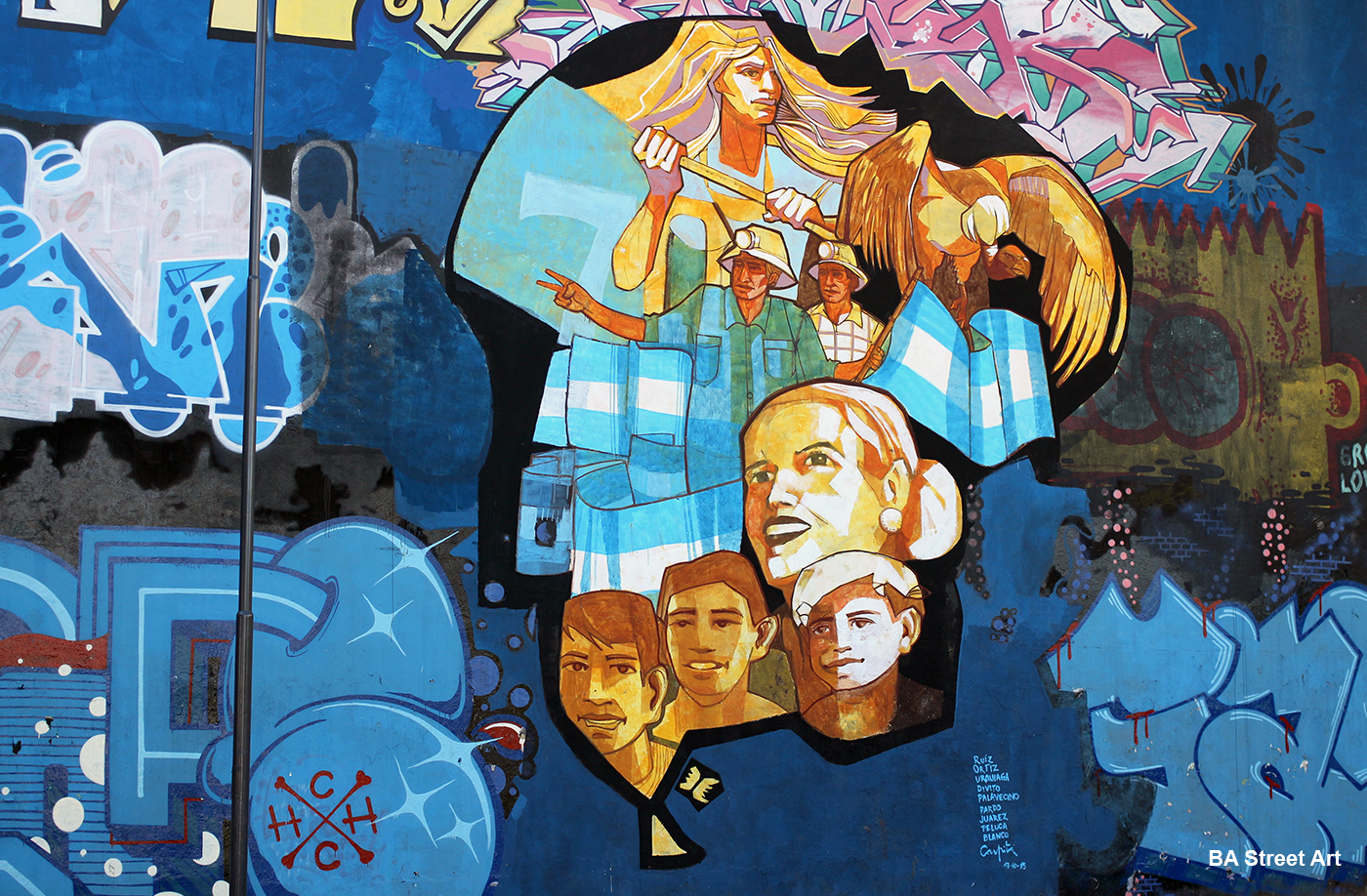 What has become increasingly common in recent times is how the image of Evita has been appropriated by different political parties. When Cristina Kirchner appears in front of a microphone for a public speech, she will nearly always have a painting or photograph of Evita behind her. Daniel Scioli, the presidential candidate appointed by Kirchner in 2015, had his wife’s hair styled to appear just like Evita’s blonde bun during the close of his election campaign.

Evita features prominently in political propaganda, particularly in poorer neighbourhooods. She’s sometimes flanked by children, brave women, the working class, indigenous people and the Mothers of Plaza de Mayo. It’s as if she is like Joan of Arc or a superhero – champion for the poor, the sick, workers’ rights, human rights and feminism while standing up against the the might of the IMF, capitalism, imperialism, and the U.S.A.. Wonder what Evita would make of it all. 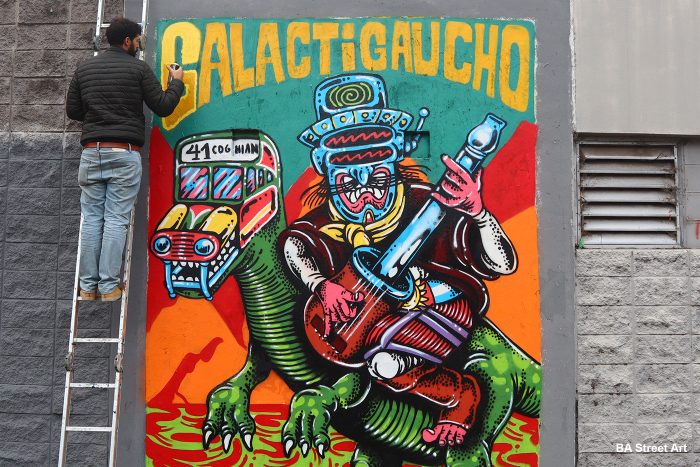 END_OF_DOCUMENT_TOKEN_TO_BE_REPLACED

Madrid-based artist Ramón Amorós has been visiting Buenos Aires and finished this new mural in Coghlan this week that was... 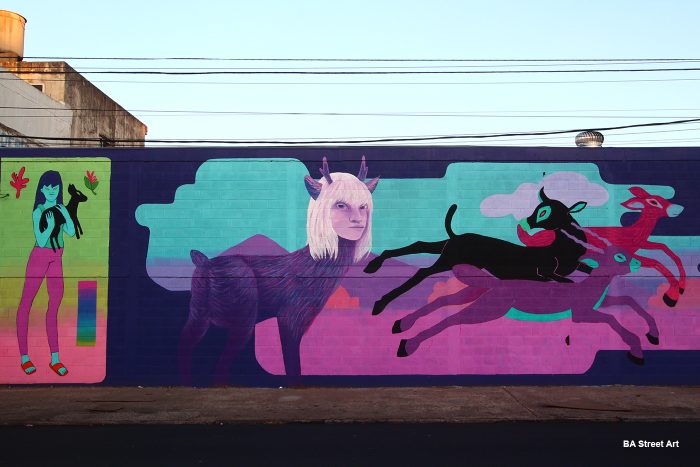