Sabotaje al Montaje together with Richar, Sau and Lar from the Canary Islands were taking part in the International Meeting of Muralism and Public Art in Cosquín near Córdoba last week. The four street artists stayed in Buenos Aires for six days at the end of their trip and painted some cool new murals in Tres de Febrero. Sabotaje al Montaje (real name Matías Mata) spoke with Buenos Aires Street Art about his first trip to Argentina and how he likes to use “colour to strike out against the system”. 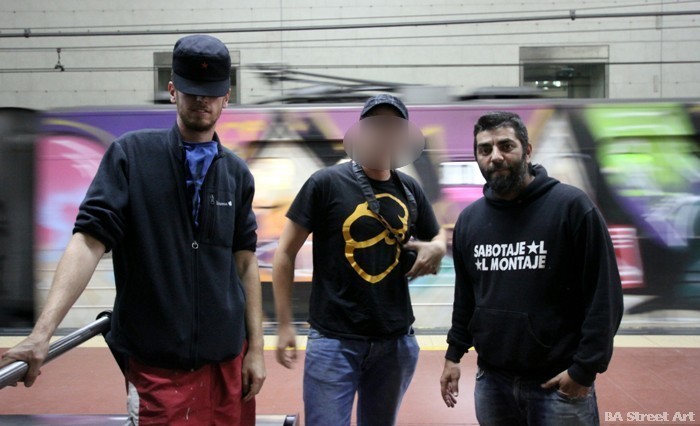 Matías, 39, is from Tenerife in the Canary Islands and has been painting in the street for 23 years. Matías completed a new mural a few days ago in Caseros, Buenos Aires, and revealed that it is a portrait of his friend Richar. “I like painting portraits and in this case it was a friend,” said Matías. “Sometimes they are people who nobody knows or people I have met. We are always painting popular idols in the street from pop music or literature but to paint an unknown person for me is more interesting. It’s also a bit of a critique and a reflection of the society we live in.” 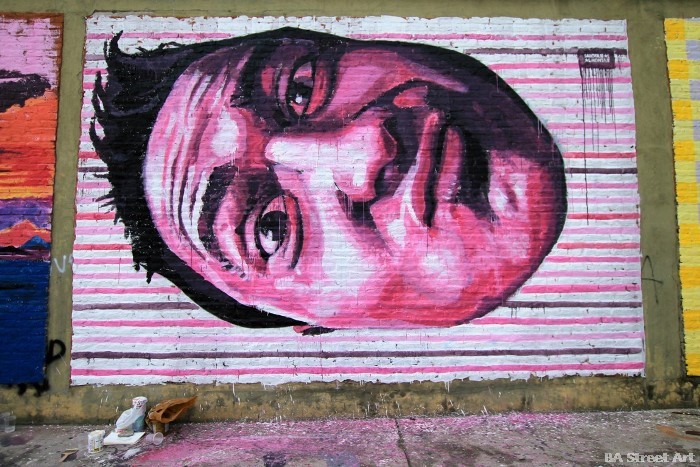 Horizontal portraits are also a common feature in the work of Sabotaje al Montaje. “I have always liked to paint portraits of my friends and people I have met on the way,” says Matías. “At one time I wanted to paint on a larger scale and represent the human body, each person with their own clothes and their style of dressing. As I didn’t have scaffolding, I started to experiment with horizontal portraits on walls to break this heaviness and verticality in cities and change the perception of the passerby who is more used to seeing murals and advertising in a more conventional way.” 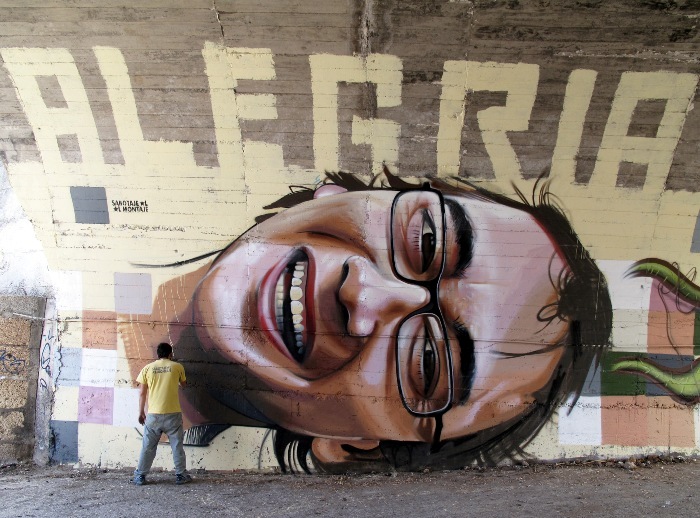 Matías was invited to the International Meeting of Muralism and Public Art in Cosquín together with another 40 artists from different countries. The artistic theme was related to the the concepts of children, war and human rights. The mural Matías painted (below) features two kids from Mexico and Senegal. 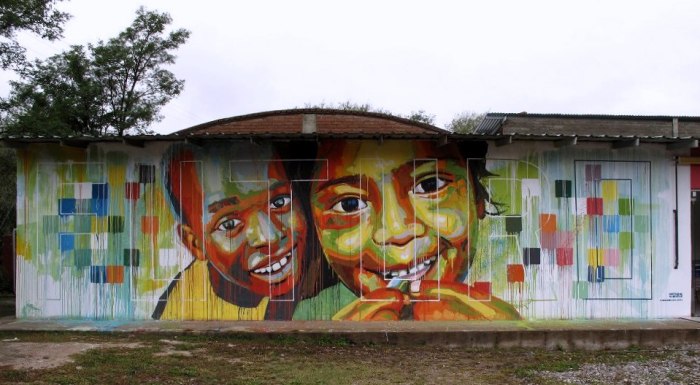 Futuro – mural by Sabotaje al Montaje in Cosquin near Córdoba

“Nearly always when I paint, I make portraits from photos I took in the street and I use a grid,” revealed Matías. “With most of my murals I use the technique of (aerosol) spray. What happened at the festival was that there were no spray cans and we had to improvise with paint that we bought with us, poles, paint rollers and brushes but we had a fun time using lots of different techniques.” 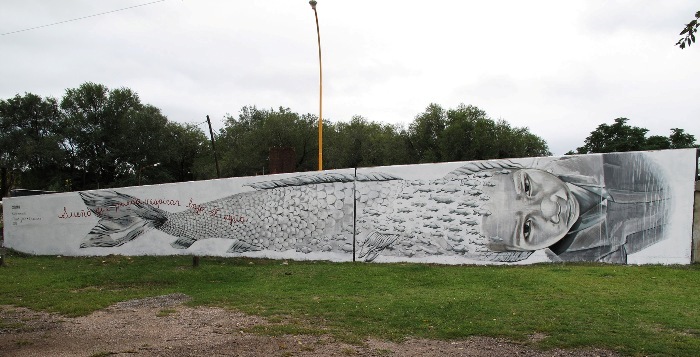 Matías also painted a black and white mural with U.S. artist Katie Yamasaki in Cosquín with the face of a Zapata war child who he photographed on a trip to Mexico. The artwork is entitled “Dream that I can breathe underwater”. Matías explained: “Katie and I met at the festival and decided to make a fusion between the two of us. It’s a bit of a metaphor of what the situation is like for children in wars. The wall is next to the river so we used this theme. It shows a child who can breathe underwater in a way that he couldn’t during a war. He is free. Katie has also been to Mexico so this was the idea.” 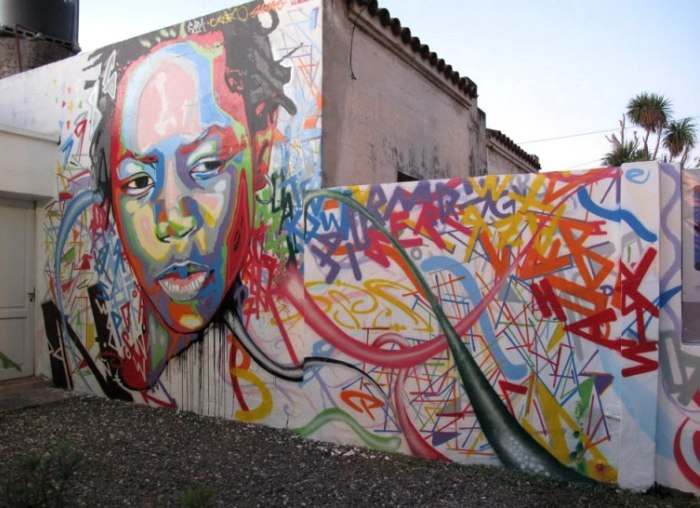 Matías was one of the first graffiti artists on the scene when the phenomenon of graffiti came to Gran Canaria in 1990. “I was 15 or 16 when I started painting in the street and I was writing tags and drawing worms,” he recalls. “I was there at the start 23 years ago with the guys who arrived from the peninsula (of Spain). Hip hop, skate and break-dancing caught on in Gran Canaria around the same time and there were only around 18 graffiti writers. Most of them gave up painting a few years later and from 1995 until 2000 I was painting alone with just two other guys. In 1996 I began painting graffiti on a larger scale and in 2003 the graffiti movement really took off and bit by bit I started to paint murals.” 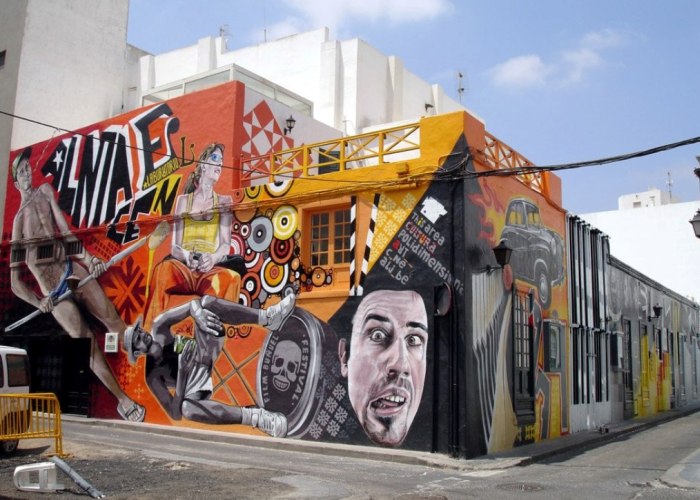 Designs at Cultural Centre in Lanzarote (2007)

The name ‘Sabotaje al Montaje’ reflects Matías’ views about a society he says is “contaminated” and controlled more and more by multi-national companies, and motivated by greed and profit. “I use the name as a protest with my signature and in my murals because it’s a part of a social participation project that I started in my neighbourhood in Tenerife, and later in Gran Canaria and Barcelona. For me, it (the system) influences everything – religion, society, money, the financial system and capitalism so you have to do some small sabotages. The system (montaje) is something bad, it is like the big lie of society and the world. So the sabotage strikes out against it and I do it with colour and paint.” 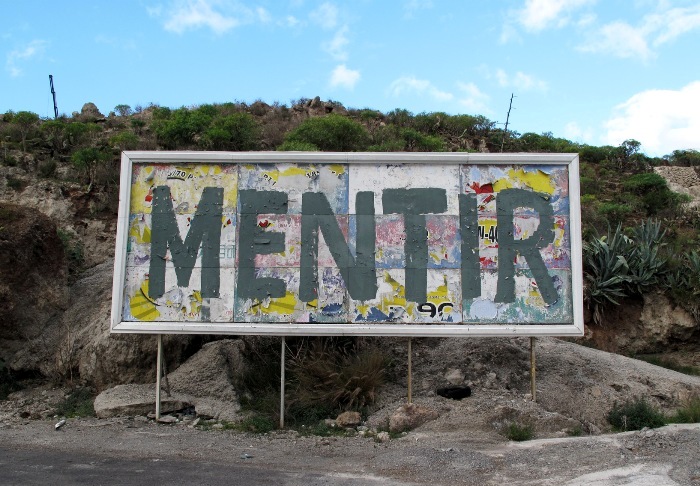 Matías has also made a series of ‘sabotages’ on a number of advertising billboards in Gran Canaria with some strong social and political powerful messages. “I like to play with concepts of truth or lies and one day I was on my way to work and I saw these billboards in font of me,” recalls Matías. “I think people are more accustomed to hearing lies than telling the truth and that is why I say to lie is politically correct, and the system has been created for their (the politicians’) own benefit.” 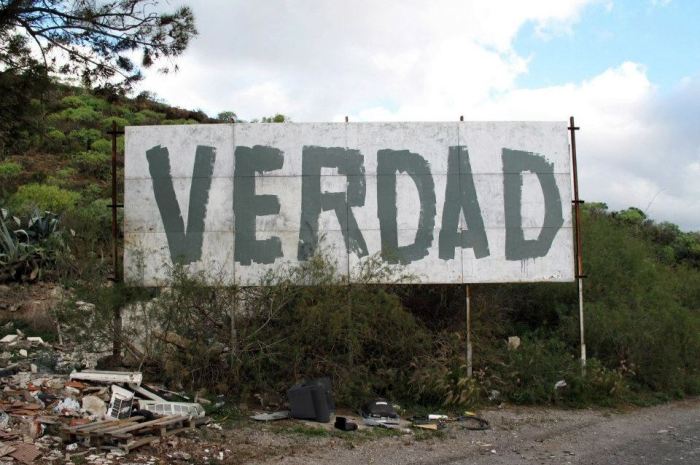 Spain and the Canary Islands have been hit hard by the global financial crisis and Matías says the interventions he makes in the street now have more impact. “They are illegal things that I do during the day with a pole and a paint roller. Advertising is everywhere but at the same time Gran Canaria is a small island and there isn’t much money in Spain and often it’s not possible to rent these advertising spaces, so when I go to work or I’m in the car I always take a long pole and some paint in case I come across one of these billboards.” 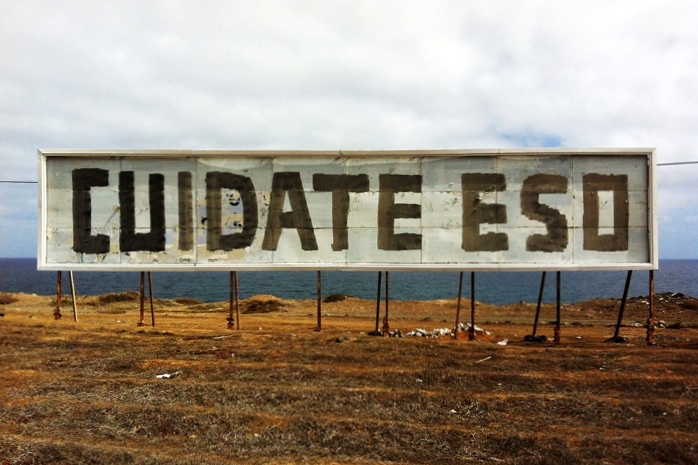 Rural environment – ‘Look after this’

Matías added: “Why do I make these ‘sabotages’? It’s nothing really; I think that colour is justified in this grey society. When I play with the concepts, it is irony about the life that I live. They are metaphors or simply represent moments in life and art.” 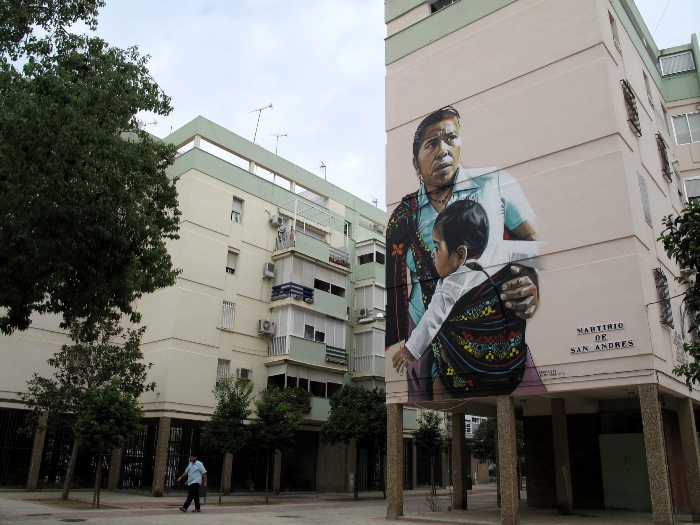 Spain and the Canary Islands have been hit hard by the global financial crisis. Matías makes a living from painting murals for companies and design agencies and also works with photography and the internet.

“Do you feel lucky?” Dirty Harry mural in film school in Tenerife (2012)

Matías believes his art can have even more impact during these difficult times. “The situation in Spain is complicated at the moment. I believe that whatever society you are in, the world is the same. It is complicated by being aligned with big companies and their immense materialism. In Gran Canaria people don’t respect the environment and it doesn’t matter to them what happens next, they are only thinking about themselves.”

Matiás said he was amazed by the warmth and hospitality he and his friends received during their trip to Argentina. “The people were really friendly and caring and the way were treated was so nice,” he said. “We arrived with very little money but thanks to an artist we were able to stay in his house for free and we were able to have a really enjoyable trip thanks to guys like him.”

Check out more brilliant designs by Sabotaje al Montaje at