No Touching Ground put up a striking new wheat paste this week featuring an Argentine 100 pesos bill with a portrait of Hebe de Bonafini, the controversial leader of the Association of the Mothers of the Plaza de Mayo. 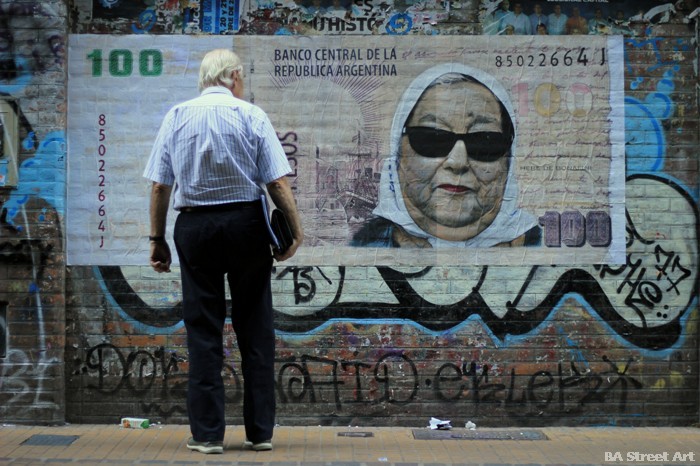 Bonafini  is well known outside Argentina as a human rights activist for her tireless work in trying to reunite relatives including her sons who ‘disappeared’ during the military dictatorship in Argentina (1976-1983). Over the last decade or so Bonafini’s reputation has been tarnished by corruption scandals including the misappropriation of public funds, money-laundering and illegal enrichment. 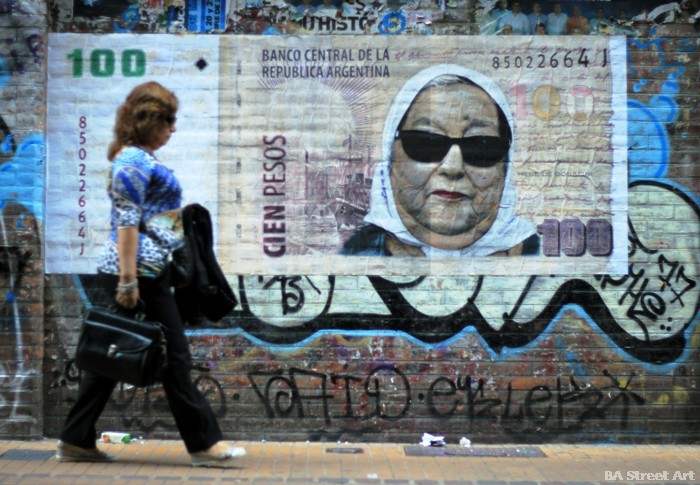 Alaskan street artist No Touching Ground, told Buenos Aires Street Art about his latest work. “I wanted to show a strong connection between Hebe de Bonafini and the Argentine government and to Argentine money. This piece is not a reflection on Las Madres as a whole, rather it’s site specific to Bonafini and the gross misappropriation of funds. I placed the image of Hebe on the 100 pesos note in close proximity to the Plaza de Mayo, a historical site for the weekly protests of Las Madres.” Bonafini was in court this week giving evidence in relation to the diversion of funds from social housing project called ‘Shared Dreams’ to build homes for the poor in Buenos Aires. Incredibly, Bonafini appointed a convicted murderer named Sergio Schoklender as manager of a the Foundation of the Mothers of Plaza de Mayo and put him in charge of  the housing scheme. Schoklender was then found to have acquired significant bank deposits, villas, a collection of sport cars, limousines, yachts and even private jets, all presumably financed with government funds. 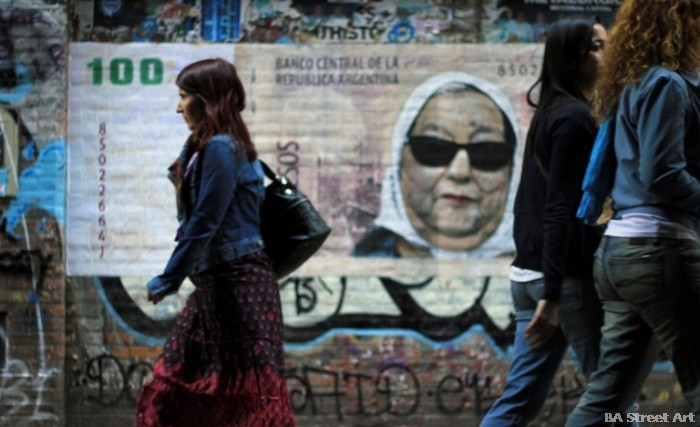 Mother of all scandals

Bonafini declared in court on Tuesday that Schoklender and his brother Pablo were “the only ones responsible” for the misuse of funds and that the pair had used her to sign acts and contracts relating to the government-funded housing project. No Touching Ground said like in the recent Susana Trimarco case he didn’t expect the offenders would be brought to justice. “I fear that those responsible will not be held accountable in the courts due to the political ties and corruption. No matter what, the damage to the legacy and integrity of Las Madres is irreversible. This is devastating to the individuals who have dedicated their lives to the cause and to the individuals and families affected by the theft of the money designated for aid to those in need.”