Aryz finished a stunning new mural last week at Meeting of Styles in Buenos Aires on the facade of a five storey building in San Telmo. At just 23, Aryz has already made his mark with his beautiful and giant murals with their soft colours and subtle tones establishing him as one of the world’s most exciting talents. In an exclusive interview with Buenos Aires Street Art, Aryz told us about his latest artwork, his respect for graffiti, why he prefers not to show his face when he’s interviewed and how his murals when photographed often look totally different from the original artworks. 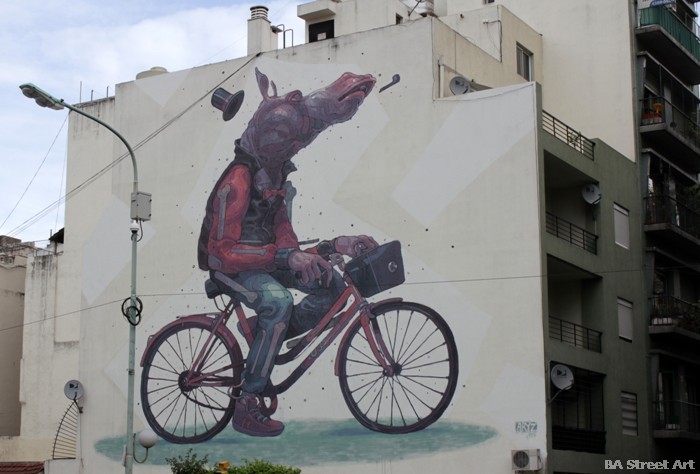 Tell us about your new artwork and does it carry any particular message?

“It is a horse on a bicycle. The message isn’t something that I like very much. A message for me is something secondary. If I have to say something, it’s worth representing it and doing it big but sometimes my art is simply about the pleasure of painting and nothing more, or the simple fact of joining colours together. The shape is an excuse to put colours in one place or another. I don’t give much importance to the message.” 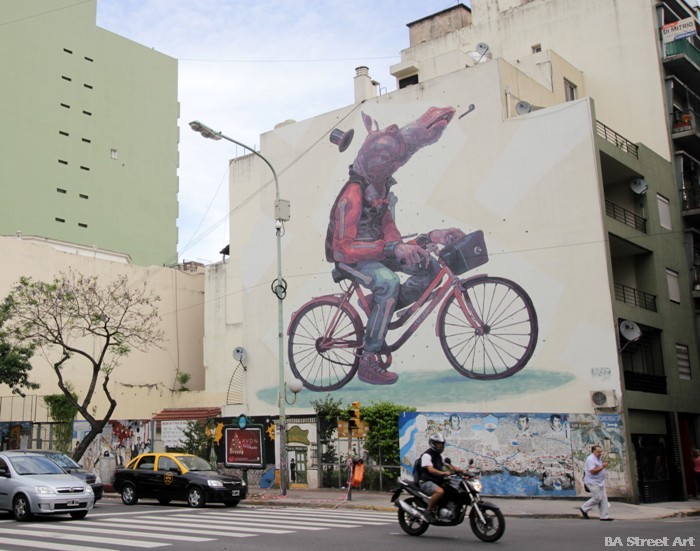 How did you come up with this design?

“I looked at the shape of the wall. At first I had another idea but I changed it a bit and decided to put a bicycle in the composition. I wanted to create a triangle with the bicycle wheels and a character. At festivals like Meeting of Styles, most of the time I get there and I’m assigned a wall and I start painting the next day and when it’s finished I go to the airport. Unfortunately I don’t have the time to see how it is perceived and interact too much with the people who live there. They (the organisers of MOS) sent me a photo of the wall a few days before so I could plan it a little and work out an idea what I was going to paint but when I found out it was a school for people with special needs I didn’t want to paint a monster or something of that style so it’s a horse with a bicycle. I like the shape of the bicycle and the empty spaces that it generates, and basically it’s that.” 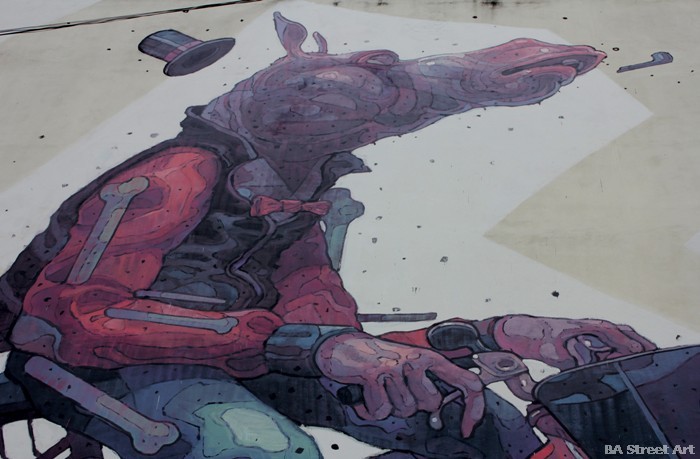 Themes and details (including monsters, pipes and cigarettes)

“Sometimes I accompany them (monsters) with skeletons or certain themes but it wasn’t right to do it near a children’s playground. I don’t smoke. Often I paint them (cigarettes) for the composition to align certain elements. Other times it is for the meaning. The cigarette before could be a symbol of the upper class that was privileged to smoke, now it has changed over the years but neither do I like to spend time thinking about concepts. I prefer to give importance to the colours and the form on top of the concept. I prefer to give importance to the treatment of the colours in the time that I have available to paint and I think that I prefer doing this than give any political message.” “A drawing is an excuse to add some colour and sometimes it is due to a lack of ideas that I say or do one thing or another that I find funny but neither do I dedicate much time thinking about the project or drawing as I spend a lot of time painting the wall. And sometimes it is almost better when the project takes less time because I can be a bit more spontaneous.” 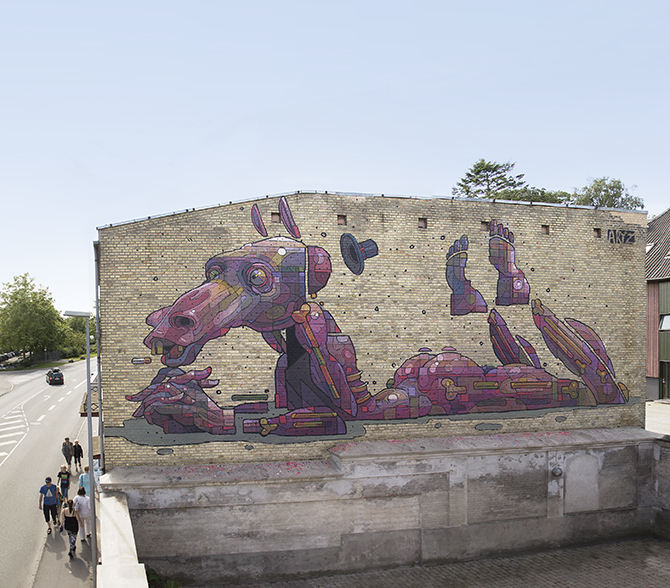 “I think that everything influences you in one form or another every day, whatever thing. One isn’t conscious of what one does. There is so much information going around on the internet, television and in magazines and books that you don’t realise the amount of information that you are receiving. What influences me the most are the people closest to me, the way that I work, the hours that I invest, and I’m sure it has a lot to do with the people around me and with my family too.” 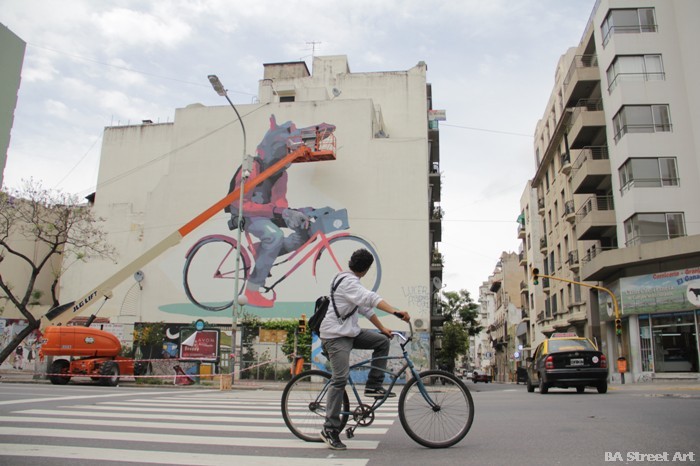 Painting in public spaces and the internet

“If I am painting in the street where there are a lot of people you are exposed to a huge public from day to day so they see the whole process. It’s something that I don’t like very much that they see certain parts of the process because the work is subject to change, it is a learning process, from the start to the end there are a lot of changes. If someone takes a photo of the process with their mobile phone or camera, the same day in the afternoon it is on the internet. It’s inevitable but it annoys me a little because people start to judge your work before it’s finished. It’s as if you are cooking and still you haven’t put in the ingredients, and someone starts tasting the food and saying it needs more salt or something is missing. There is so much information on the internet that you can search for my name and see almost all my works. Perhaps there isn’t the magic that there was before, to be able to see a piece and see the finished work as if it’s new.” “Now you can see thousands of photos of the process, a thousand of the finished artwork, and sometimes also the photographers brighten the photos and start to touch the colours in HDR  (High Dynamic Range) and some strange things, and in the end it ceases to be a photo that documents (the artwork) and becomes the work of the photographer. I have seen photos on the internet of one of my works where the guy who took the photo has saturated the colours and maybe a pink has become a red then it ceases to be your work but the people at home don’t notice it because they don’t know what the colours were like in the original artwork. I try to have a photo that reflects the scene and the colours as well as possible. Normally I tend to unsaturate them because later people start to saturate them, and I prefer that they are unsaturated. (In this artwork) the colours aren’t bright but I’m sure if you search for photos on the internet of this wall, you are going to see this red, that is an off red with a touch of grey, you are going to see a bright red and that, in truth, is not a faithful photo. However, these things happen.” 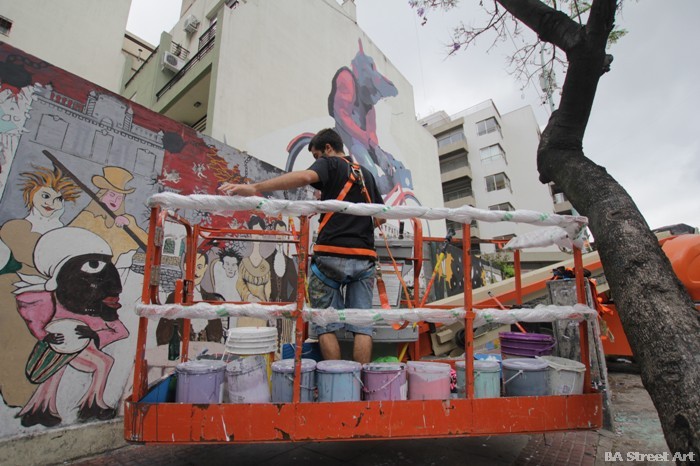 How did you start as a painter?

“I started to paint with spray. I don’t like to say ‘before I was doing graffiti and now I do this’. Graffiti is something that, for me, has a very demanding public, the most demanding, and to gain their respect is difficult. I see people, for example, that say “I do street art now, before I did graffiti”. This to me shows a lack of respect towards what graffiti is”, because it’s like saying that I have gone through a phase. Really as a graffiti artist I consider myself pretty mediocre, and later I had this facet of painting big murals. But I don’t like saying that I come from graffiti and now I do this. Also there are different people who say “before they did graffiti to gain some credibility, that they learnt how to paint in the street, and to make themselves sound cooler, an attitude like that, so that people from outside think ‘before they painted trains’. Really, what I am saying is that the artwork has to speak for itself. Whether you have been working for a long time or a short time, it’s all about the experience that you gain. With artworks, what you have to evaluate is the visual aspect. whether it is graffiti or not, has nothing to do with it.”

So are you an artist then? 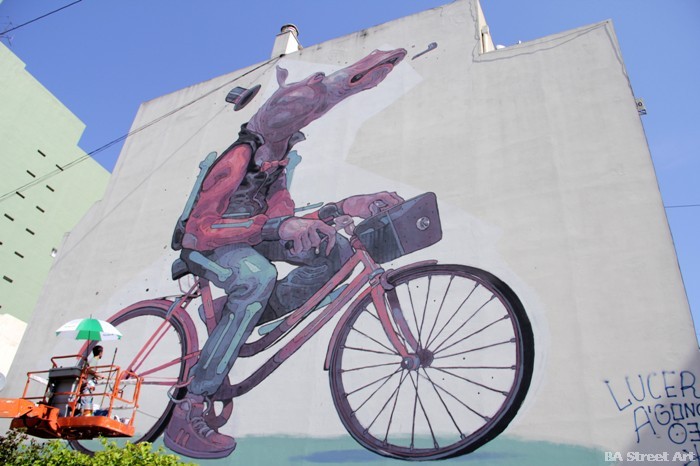 With respect, can you tell us why you prefer not to show you face in our interview?

“It’s simple, look, your work has to speak for you. Your face or your appearance is not something that is going to favour your work, perhaps it makes you more accessible to people but I don’t want to be more accessible to people. Really, I am painting and people can come and they can tell me what they want and they know who I am because I am here painting. About showing my face, I find it unnecessary. It’s not that I want to be anonymous or appear cooler because if you look for photos of me on the internet surely you’re going to find one where it shows my profile or you see me but if I can avoid showing myself, it’s better. In the end, I suppose that I’ll show my face but it’s not something that I am going to lose sleep over.”

Check out more amazing walls painted by Aryz on his website www.aryz.es END_OF_DOCUMENT_TOKEN_TO_BE_REPLACED

Gualicho finished a new mural this week that features the Buddha of Abundance on the front of a local business... END_OF_DOCUMENT_TOKEN_TO_BE_REPLACED

New mural by Primo in Coghlan

Primo finished a new mural in Coghlan on Sunday featuring an African tribeswoman covered in flora.