There’s even more than meets the eye when you see the wonderful works by Colombian street artist Nice Naranja. His imaginative designs of animals and birds stand out for their amazing spectrum of colours as much as their incredible attention to detail. His art, however, also carries a poignant message about mankind upsetting nature’s delicate balance. 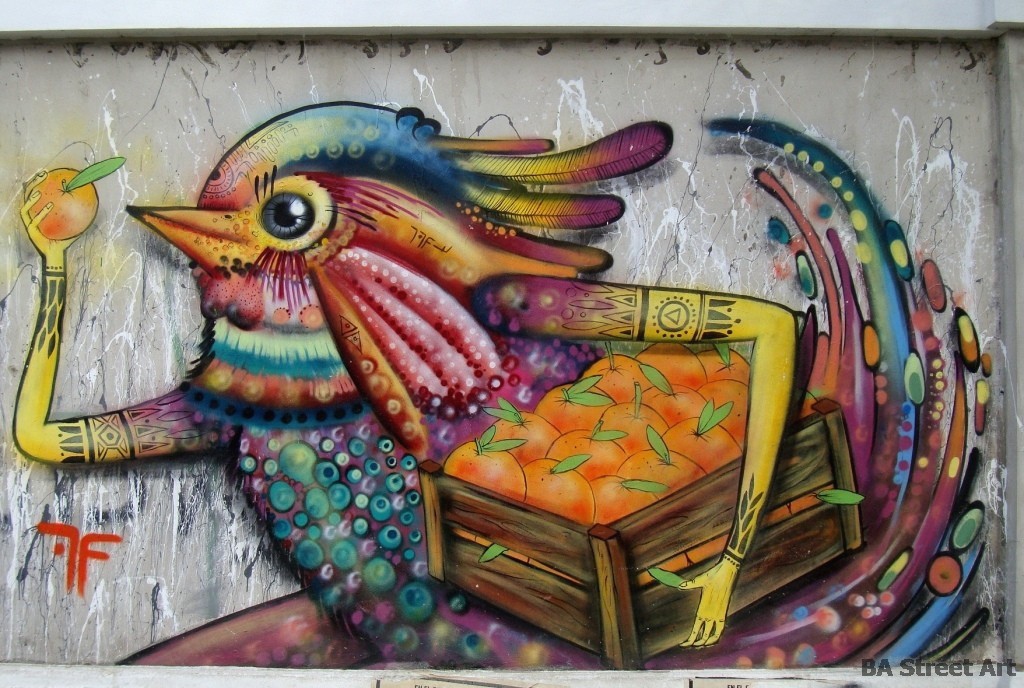 Nice’s birds bearing gifts can be found all over the Federal Capital and Province of Buenos Aires. “The birds are giving fruit to the people,” Nice explains. “They are showing how nature feeds man. I like the idea that people have to think about and look after what they have. Animals give fruit to humans and people have to take care of the birds. I paint birds and animals to make people realise that living in cities is not their natural habitat.” 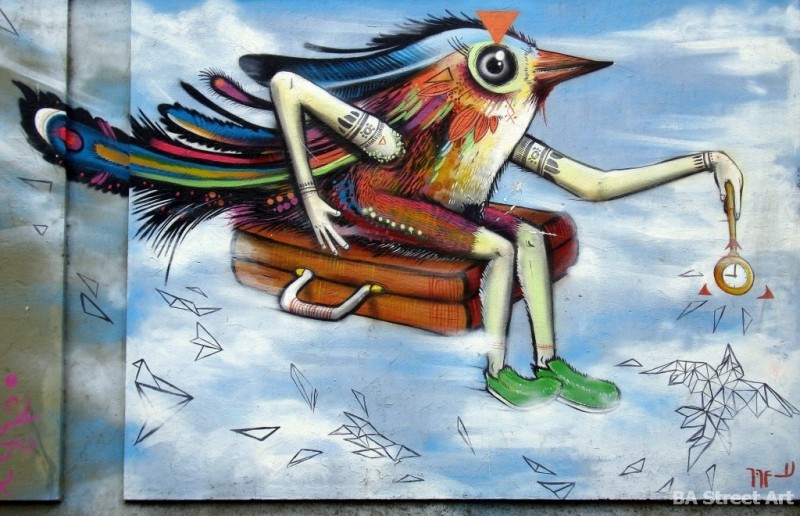 Scientists have warned that the human race is plundering the planet at such an alarming rate that it is outstripping its capacity to support life. A third of the natural world has reportedly been destroyed by humans in the last three decades. “I found a way to paint in the street and say to people that what we are doing is wrong,” explains Nice. “There’s more to it than just caring about the planet, it’s about having a conscience about the things that people do and the materials that we use to make things and throw away.” Nice is from Bogota, and first painted in the street aged 14. He began as a graffiti writer in 2003 under the tag Hams and later Nice. “I started to paint in the street in Bogota and couldn’t stop,” he recalls. “I learnt a lot and I then started to experiment with drawings and nature and do other things – not just painting but sculpture and industrial design too which have taught me many things about different materials.” 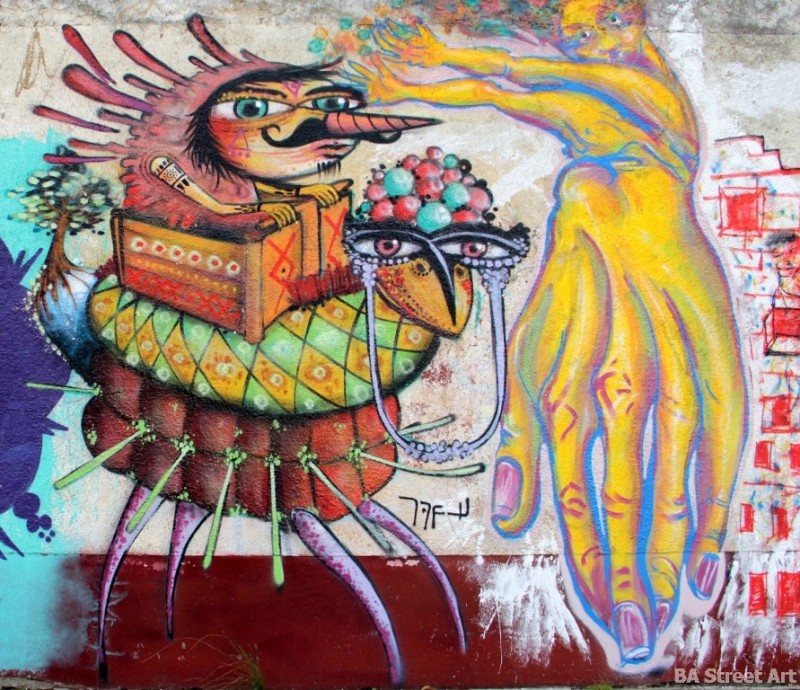 Nice moved to Buenos Aires last year to study industrial design at the University of Palermo. One of his artworks (above) depicts a human character in fancy dress sitting on an antique chair giving out eggs. “It’s a mix of textures really,” says Nice. “It’s a Louis XV sofa and a mix of antique baubles made from various materials such as leather, string and different fabrics.” 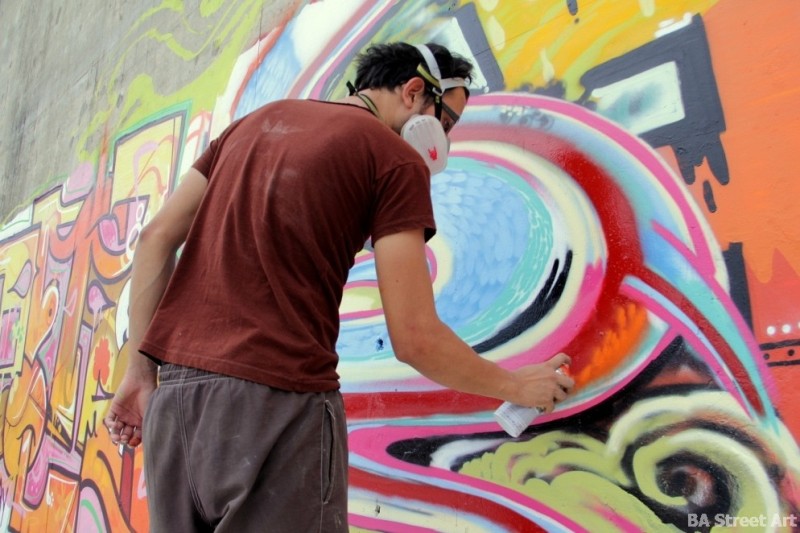 Nice working on collaboration with Perla

The freedom Buenos Aires offers street artists and the lower cost of aerosols and paint compared to Bogota has also made it easier for Nice to devote more time to his art. “In Colombia I was painting mostly graffiti letters but soon after I came to Argentina I decided to make a change and paint more pieces and characters,” says Nice. “I had actually given up painting but after coming to Buenos Aires I took it up again and I have never painted as much as I’ve been doing here. There are lots of opportunities to paint and lots of walls.” 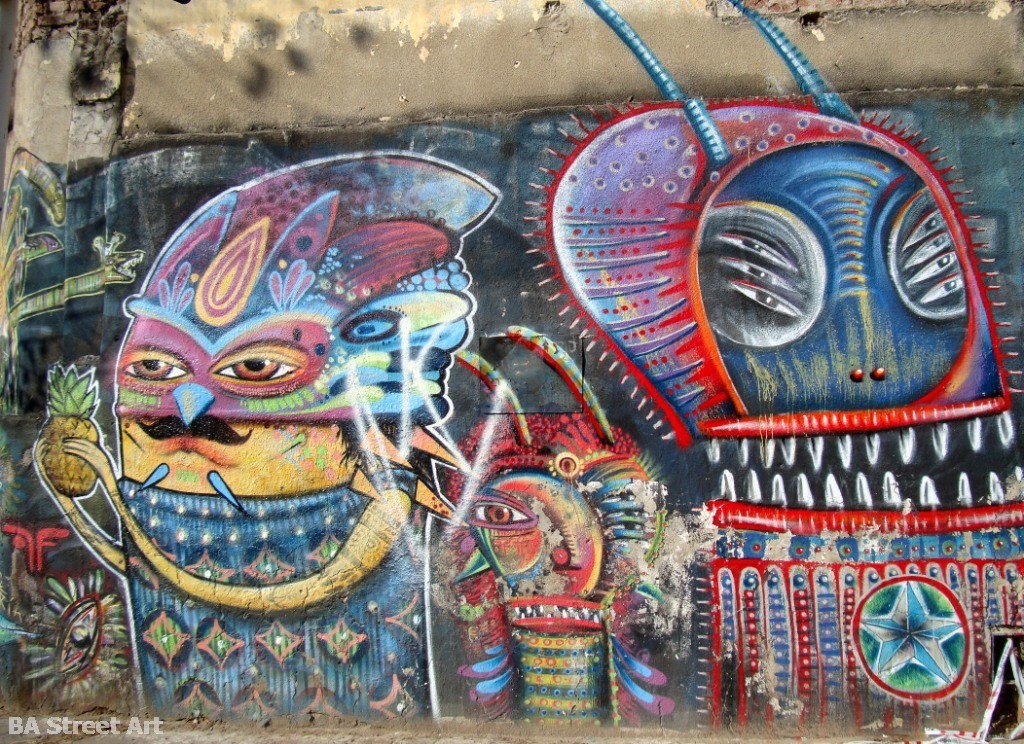 Pineapple express with Rodez and Malegria

One of the great things about the Buenos Aires street art scene its cosmopolitan feel with artists from many different countries in South America living here. And Nice often collaborates with the likes of Rodez and Malegria who are also from Bogota, and last month he painted with Jade from Peru and Narcélio Grud from Brazil. Organic: collaboration with Amor and Jade

One artist who Nice met shortly after settling in the Capital Federal is Amor. The pair share very similar values about environmental issues and the way humans, architecture and nature interact. Nice and Amor have painted many walls together and even incorporated nearby trees and vegetation growing on the architecture into their designs. 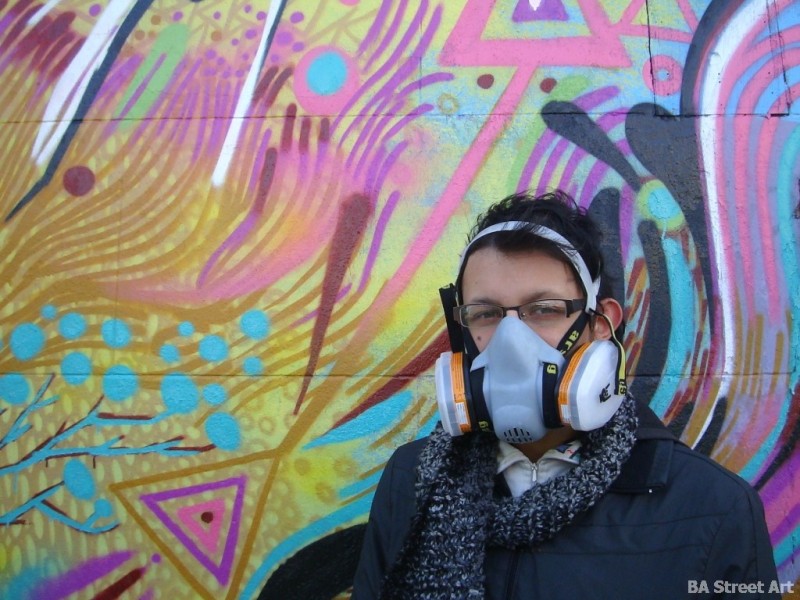 Nice in front of a wall he painted with Amor

One of Nice’s artworks at a former railway station in La Plata also has a strong message about human consumption and environmental damage. It features a character snapping a car in half with an orange tree sprouting from the wreckage. Nice says: “It’s showing that without cars, the planet would be be better off.” Nice’s influences come from all walks of life and Latin American street art too.”Os Gemeos influenced me a lot and also Yurika who paints graffiti letters in Colombia; industrial design and fashion too,” enthuses Nice. “My influences are also from nature, from plants and how they grow. I also create a lot of shapes from numbers. They reasons why I paint nature are all positive and to me how the artwork interacts with the urban environment is more important than the artwork itself.” Nice also draws inspiration from Egyptian mythology and Latin American tribal culture. In La Boca he has painted two boys with traditional masks holding a Bocachico, a freshwater fish common in Colombia, and he also painted a little horse in the neighbourhood of Caballito with artists Nomada and Charquipunk. 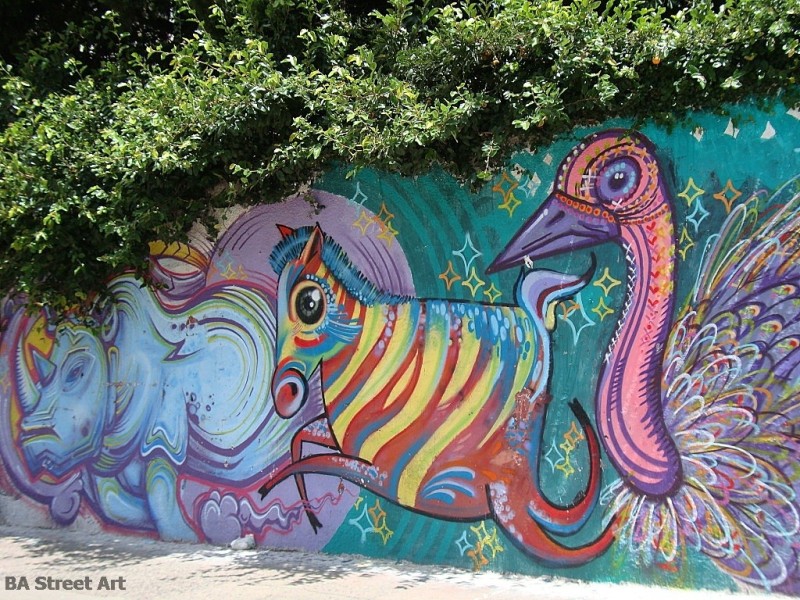 Caballito by Nice with Nomada and Charquipunk

Last year Nice also painted an amazing owl clutching a boa constrictor in Parque Patricios (below). While he and some other artists were painting, they were held at gun point and robbed of their money and mobile phones. Nice described what happened: “There were three of them. They were bad in the head. They were smoking paco and had pistols. One of them pointed a gun at my head and said: ‘give me everything.’ We then finished painting one more artwork and quickly left.” Another stunning feature in Nice’s art is the eyes of his characters and animals. “When I started to draw eyes I realized that I was doing something in a different style, something new that I thought I was going to like,” revealed Nice. “I tried to do it in such a way so that is was changing and evolving until I realised that you always have to have your eyes open to change the world. When people see the eyes that you draw they appreciate how it is. I think that when people open their eyes, I want to make them conscious of what they are looking at.” He added: “Eyes grab my attention because human beings are always trying to look into the eyes of another person just like animals who look one another in the eye. It is the visual contact. If the eyes are there on the wall and the bird has eyes there is a visual communication between it and the person who is looking at it.” 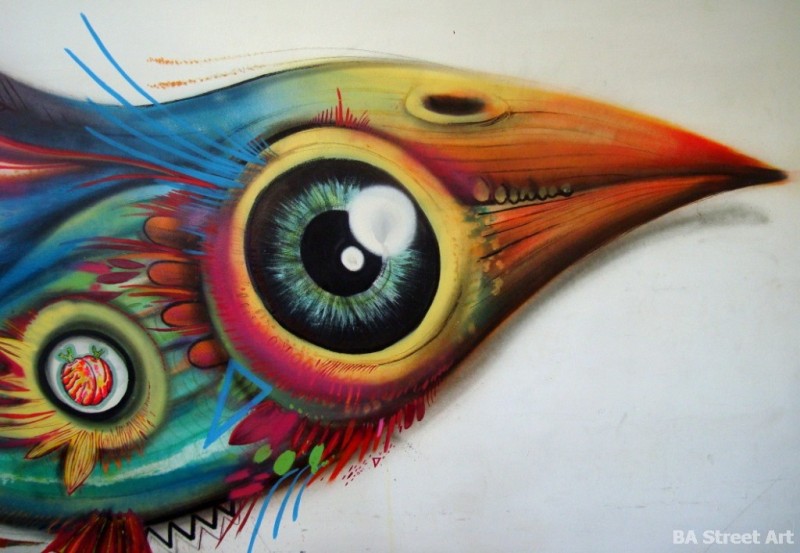 “The street also gives you the opportunity (as an artist) to say to people: ‘Look at this!’ And if you put all this inside an artwork, it generates a number of things that people have the opportunity to see, and it can change their behaviour.”
Check out more amazing artworks by Nice on his  flickr
All photos © BA Street Art

END_OF_DOCUMENT_TOKEN_TO_BE_REPLACED

Blu is in Buenos Aires and has just finished painting another politically charged mural. It features six figures being roasted... END_OF_DOCUMENT_TOKEN_TO_BE_REPLACED

Alfredo Segatori was painting in Plaza del Arbol in Palermo yesterday and has been continuing to work on his brilliant...