Malegria, Nomada and Rodez are three Buenos Aires-based street artists from Bogota, Colombia but they have much more in common than you might think. Malegria and Nomada are brothers, Rodez is their father and all three have a very close relationship both as a family and as artists. 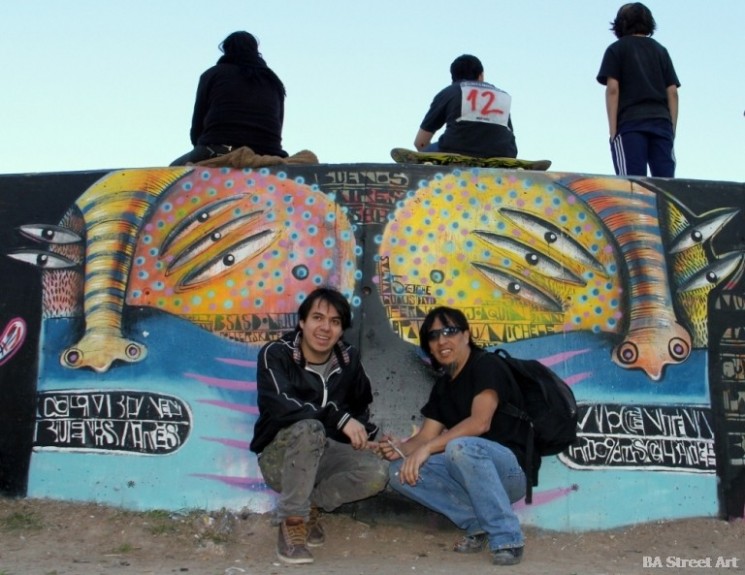 A family affair: Malegria and Rodez

“I think that most families need to get close to one another sentimentally and emotionally in different aspects and we are bound by colours, shapes and drawing because it’s a language that we share besides being a family,” Rodez told BA Street Art “Like all families sometimes there are arguments. Usually it’s about who borrowed my paint brushes, who stole my paint roller or who pinched my aerosols!” 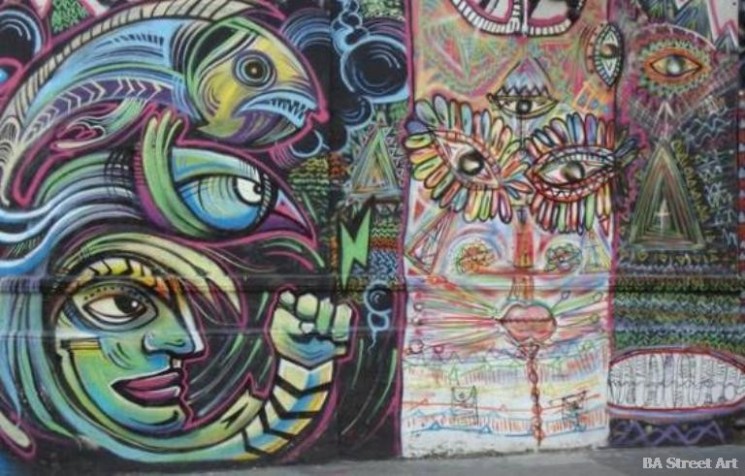 Nomada and Malegria in San Telmo

Nomada, who is a graphic designer, was the first one in the family to get into graffiti some 12 years ago before passing his skills on to his younger brother and father. Nomada is from the more orthodox school of graffiti and started out as a letter writer.

Malegria, who is studying cinema photography at the Universidad de Cine in Buenos Aires, has a very different artistic style and background. He creates characters with beautiful textures, intricate patterns, shapes and details in aerosol.

Rodez, 50, who is a painter and illustrator by trade, is the relative newcomer to street art, taking it up seven years ago. His artwork often includes mask-like heads and surreal creatures which he calls his ‘animales fantasticos’ that he adapts from illustrations he’s made on paper. 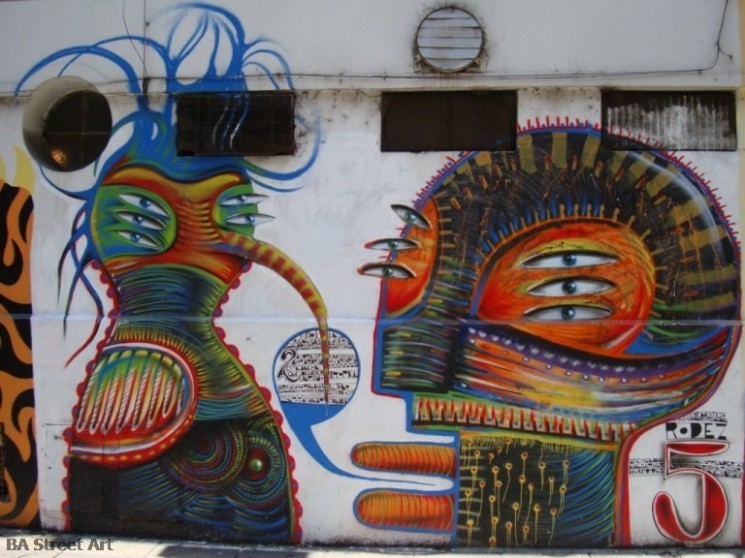 It’s a bit of a cliche but the family has an abundance of artistic talent. “I started to paint since I was little because my father is a painter,” says Malegria. “I also took painting classes focusing on recreating the human figure. It was great to learn this but now I don’t apply it so much.”

“My elder brother started painting a long time ago and many times I would accompany him and we would leave the house together to paint,” recalls Malegria. “Our story is a bit strange as my brother is from the school of graffiti relating to rap and hip hop and started out painting illegally and bombing, while my dad is more associated with plastic art and illustration but the three of us all paint together.”

Nomada also helped his dad to master the aerosol. “I learnt from my son,” explains Rodez. “He started painting in college and invited me to a festival in Bogota and I started out doing little drawings on a small scale and he taught me the technique and how to use an aerosol. At first I was a little sceptical and wasn’t sure what I was doing but I liked it because I was doing it with my son, and then I thought: ‘Wow. How cool, I just loved it!'”

Rodez loves painting with his sons but how does the dynamic work between the three of them with their different styles? “When we meet up, one of us will start painting, then another will arrive or often we all go out together in a group if we are in Bogota or Buenos Aires. When I paint with them both I integrate myself a bit more with the colours because with aerosol it’s more technical.”

For Malegria, Nomada and Rodez the Buenos Aires street art scene offers them much more freedom and opportunities to paint than in Bogota. “My dad started to paint graffiti by experimenting with aerosols in the street,” says Malegria. “I came here in this regard too it also coincided with the explosion of graffiti in Buenos Aires, whereby you can more or less paint where you want while it’s almost illegal in Colombia.” 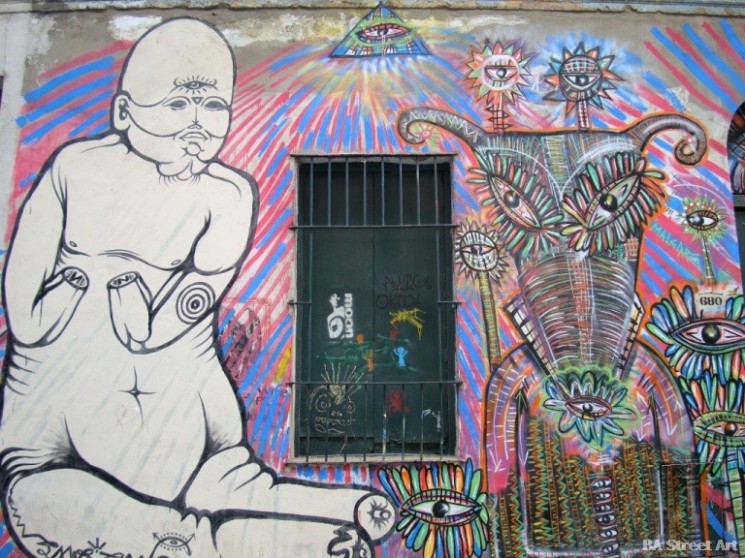 Malegria added: “Painting graffiti is much more complicated in Colombia as it is associated with vandalism. It’s a question of politics and the values of the people. Also there aren’t the spaces to paint because the government is much more repressive than in Argentina.” 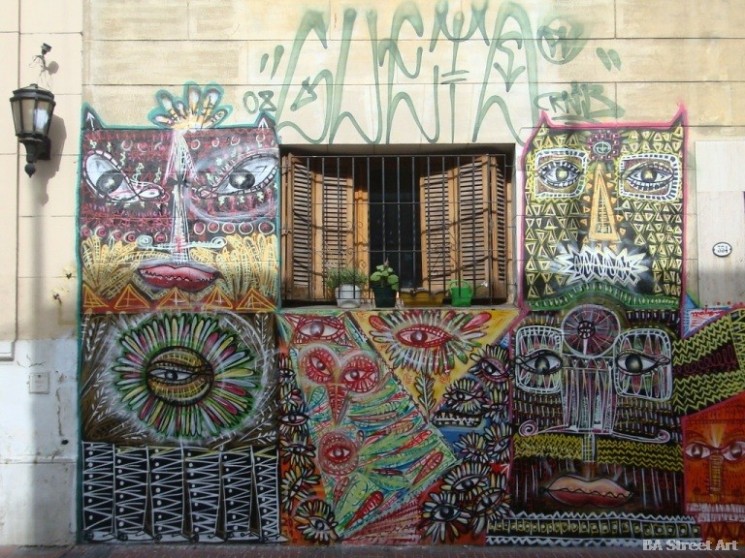 Rodez has recently returned to Buenos Aires following a successful gallery exhibition he held in Bogota and is planning to make some more trips to other cities in Latin America to paint. Last year he visited Europe and capitals including Prague and Berlin. “I painted some eyes on some large stones in a big park in Berlin,” revealed Rodez. “Graffiti is illegal in Berlin but it’s fairly easy to paint because the place is very receptive to street art. I was in Prague painting an abandoned house and the police came, things are more complicated there.”

For your eyes only: one of Rodez’s first murals in BA

Beautiful coloured masks and lots and lots of eyes are a hallmark of Rodez’s work. “I have thousands of eyes”, says Rodez, as he counts about 30 on a recent design at a skatepark in Caballito. “What moves me about eyes is that whatever object has eyes, a rucksack for example, when it has eyes it starts to have a life, an identity and a personality in respect of its eyes. When I put eyes on the animals or the masks that I paint I have the feeling that not only are you looking at the walls but the walls are looking at you, so it’s a like a language with two meanings.” 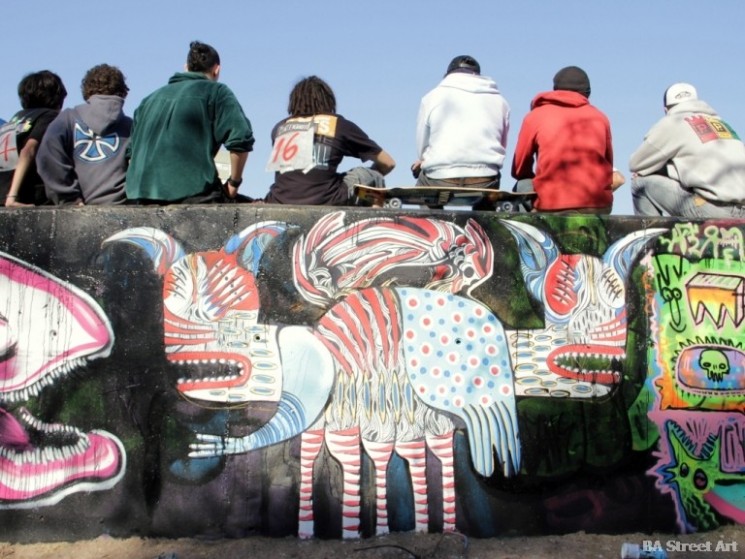 Rodez draws much inspiration from Mexican and Peruvian traditions and has also studied textiles made by ancient tribes such as the Paracas. Argentine artist Xul Solar who illustrated several books by Jorge Luis Borges with his hallucinating designs has perhaps had the biggest impact on Rodez and there are similarities between their two styles. Malegria’s artworks like those of his father also take many influences from Latin American culture including that of the Incas, Mayans, Bolivian and Colombian peoples.

Motifs too feature prominently in Malegria’s artwork. “They are texturas that I make,” he says. “In general before doing a mural I look at some influences from the past such as indigenous fabrics, dresses, totems, symbols and ornaments.” 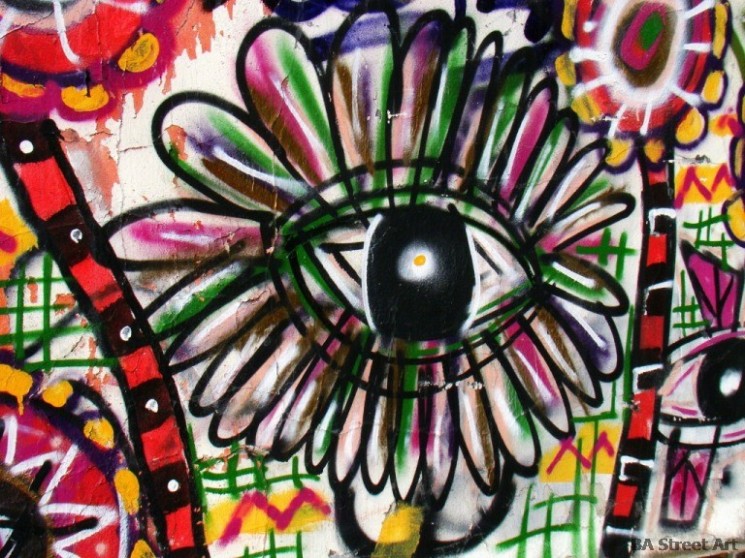 “I relate my art a lot with who I am now and it also has traces from my ancestors and things that I have inside me, it’s like an exploration. I admire our ancestors a lot, the way they assimilated things and I find what they did really enriching. I use motifs to generate different texturas, I’m not trying to bring back any indigenous meanings from the past as I respect our ancestors too much.”

Malegria came to Buenos Aires five-and-a-half years ago. And with time, some social issues such as homeless and poverty have started to creep into his art. “The idea that I have is about this phenomenon that happens here in Buenos Aires,” says Malegria. “There are a lot of evictions and empty houses and spaces that can be used to house people. Many houses are left abandoned simply because in theory they belong to someone who doesn’t want people to live there and so the space dies.” 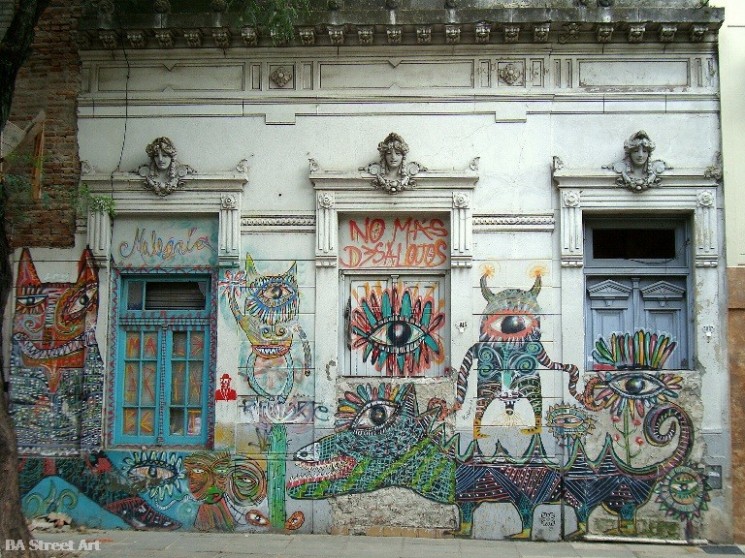 No más desalojos’. ‘No more evictions’.

Malegria adds: “I think it’s a good thing to intervene in these types of buildings and point out that they are empty because there are an enormous amount of people who are living in the street.”

Another boarded-up building with Mondo Lila