Penetrating portraits of his brother and strangers with striking faces that he’s never met. These are some of the brilliant artworks by Argentine street artist Ever. Exclusive photos and interview by Matt Fox-Tucker of Buenos Aires Street Art.

“Who’s this guy you’re painting? I ask. “He’s my brother,” Ever tells me. “What I really like is normal, everyday people. It’s just a feeling I get. I prefer to paint ordinary people, it doesn’t interest me painting the faces of beautiful models who appear in magazines or popular culture. These people have much more character.”

One of Ever’s most striking murals is that of Miguel, a youth from the U.S.A. who he came across on the internet. “This is crazy,” says Ever. “I was looking in Google Images. I type in concepts, for example: ‘woman, beauty, fidelity…’ One day I typed in ‘Miguel’ and out jumped this image that I painted on the wall. It’s something that I like and I like to work with things that I don’t know. When I work with an image that I don’t know, I can imagine lots of different things and I’m am not forced to think about the personality of the person. In the case of Miguel, his face is really strange, with wide eyes, a nose like a Mexican, and in the photo his gaze is really penetrating.”

“There are people who say the eyes are the window of the soul,” says Ever. “I don’t believe in that but in the case of Miguel’s eyes, they show a lot. So I made another eye it’s his third eye if you like. He has a lot of soul because the photo is a bit sad. I did a bit of investigation and found that the photo is of a kid who was caught by the police in the U.S. for possession of cocaine. The photo is your typical police mug shot.” 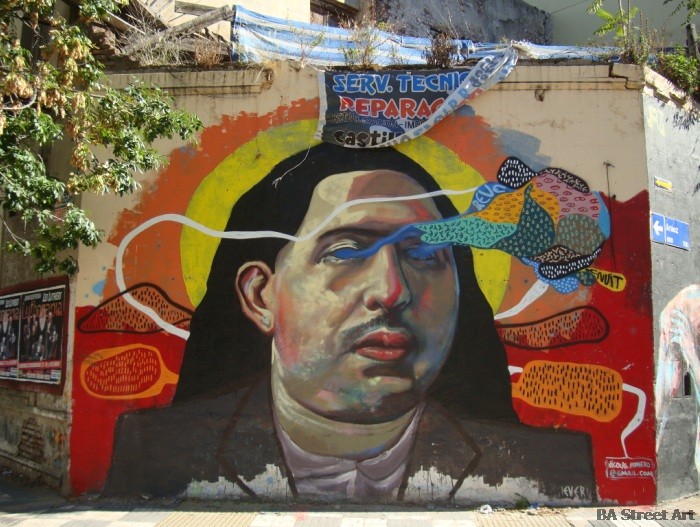 “When people look at my portraits, sometimes they think there is something holy or they are a tribute. They are always asking me ‘who is he?’ and they ask the same about the portraits of my brother. They say: ‘Poor guy, is he dead?’ And I say, ‘no’, he’s at home watching TV!”

Ever has also painted another mural of a man he had met only once briefly, a construction worker from Córdoba. “I was painting in the street when I saw a man who was working there,” said Ever. “He had the strangest face I’d seen in my life. His head was almost square with these eyes in the middle, with a huge smile and weird hair. I told him ‘you don’t know me but I need to take your photograph’. He told me he was busy but if I sent him an email, he’d send me a photo. I worked with the photo and wrote back to him but he never replied.”

Ever in collaboration with Nerf, Mart and Fisek [photo © BA Street Art]

Ever first started painting in the street in 2001 during a time when he was a youngster who was into hip hop, skateboarding, letter writing and graffiti. “I was painting typical graffiti, painting letters was the best thing,” Ever revealed. Later on, there were other factors that had a much bigger impact on Ever’s art. A five-month study trip to Paris where Ever was able to look at works by Vincent Van Gogh more closely in art galleries like the Musee D’Orsay helped him develop his own more figurative style.

“It was a time when I was trying out different techniques and painting more portraits. I believe the influences of (Gustav) Klimt, (Francis) Bacon and (Vincent) Van Gogh opened up more areas. (Diego) Velazquez too, I looked at his paintings a lot and now there are times when I go back and look at a book I have of Lucian Freud.”

During his stay in Paris, Ever made many new friends, and also met a number of socialists and communists. “While I was there I realised more that in Europe and countries like France, a lot of people have a political conscience,” said Ever. “I’m not a communist but I started to read about (Léon) Trotsky, Mao Tse Tung and works by French philosophers. I thought it would be good to use images that people know but in my own way.”

“What comes out of Mao’s eyes is his soul,” reveals Ever. “It’s an abstract way to perhaps show colours that represent communism. To me, Mao was a leader and an individual with incredibly strong ideals.” Ever said he was also fascinated to find out how the large Chinese community in Buenos Aires would receive his mural. “By chance on the corner where I painted the mural there’s a Chinese supermarket,” said Ever. “While I was painting, I felt someone tap me on the shoulder, I turned around and it was a Chinese guy from the supermarket and he said: “Mao Tse Tung’, and gave me a hug.” Ever added: “The truth is I was a little scared at first what this guy would think about my design but it’s great that it’s been so warmly received and by a Chinese guy as well.”

Dogs are another theme that Ever has featured in his artworks. Many of his murals from 2008 until early 2010 featured Chihuahuas, the fashionable pets owned by rich socialites such as Paris Hilton that are common in the nouveau riche districts of Buenos Aires such as Las Cañitas.”

” I had a fascination with his type of dog,” reveals Ever. “To me they are horrible, really ugly but every time I looked at the walls afterwards I really liked how the artworks turned out. What really interested me were its facial features and human-like expressions. And of course this breed of dog also mirrors the kind of people in our society who own them.”

Check out more of Ever’s amazing artworks at flickr.com/photos/ever_dsr/