Franco Fasoli, more commonly known as Jaz, is one of Argentina’s best known and most talented street artists. He told Buenos Aires Street Art how his style has evolved from the most classic of porteño traditions, the tango. 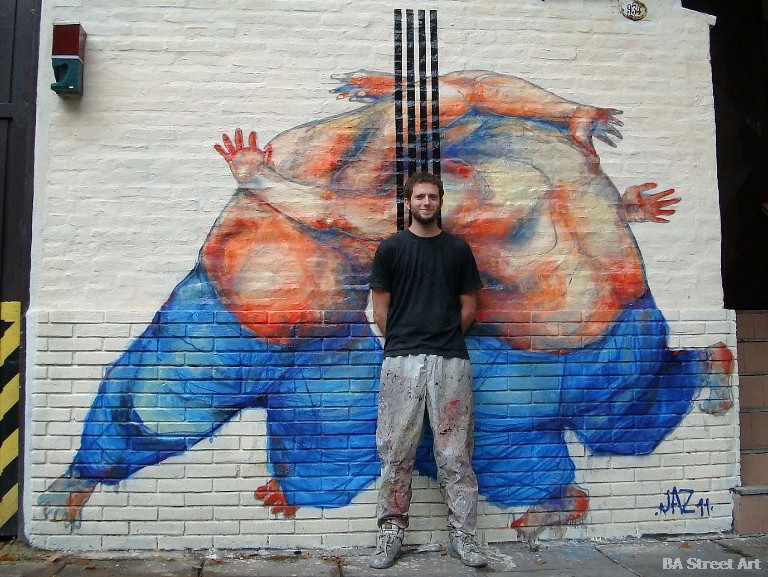 Jaz first started painting in the street in 1999 with a generation of young Argentine artists, and the fileteado porteño had a significant influence on his style. “With Poeta, Caru and some other guys we were talking about the idea of mixing the theme of ‘fileteado’ with graffitis. Nerf was working more with cubes but I was painting a lot with him, Poeta, Roma, Caru and Pastel with this theme of the porteño decoration.” 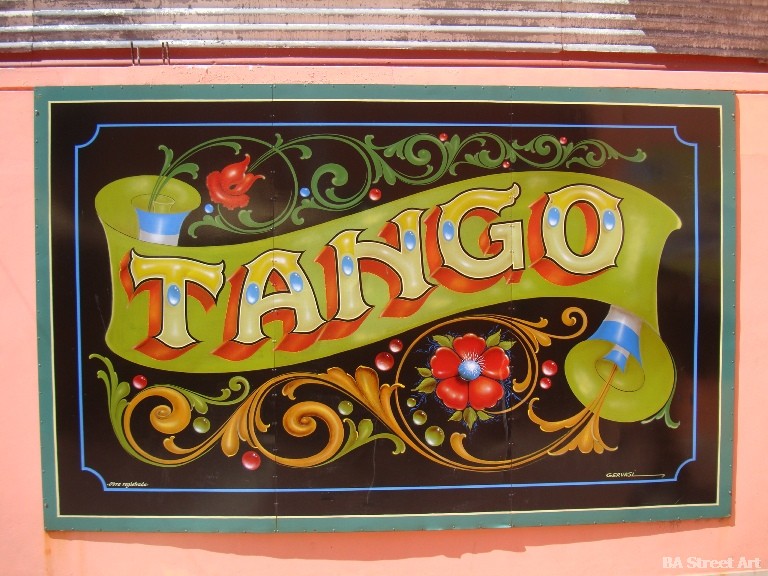 “Fileteado is very typical of tango and is super-ornamental. The graffiti during this period (in Buenos Aires) was also all about lettering and was very decorative. We were painting with letters to begin with but out came this idea to try using some more traditional themes from Argentina, not just ‘fileteado’ but we began experimenting with traditional characters from tango but then it disappeared.” 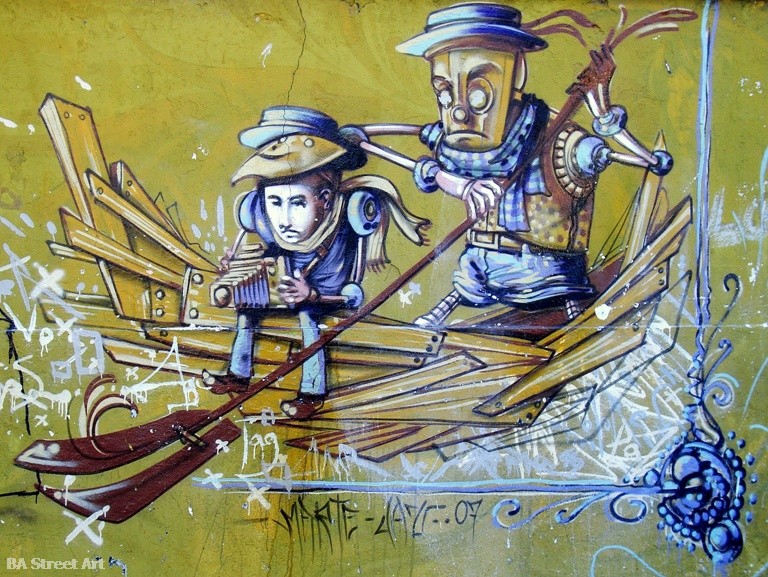 From 2005, more characters and musicians in particular became a feature of Jaz’s artworks and he painted many of his designs around the district that is now known as Palermo Hollywood. “I always lived around this zone and it was the era of the musicians. The graffiti from this period was still very naïve, we were still starting to experiment with different things. Fortunately there are not many artworks left from this period of the musicians, they’ve been lost over time!” 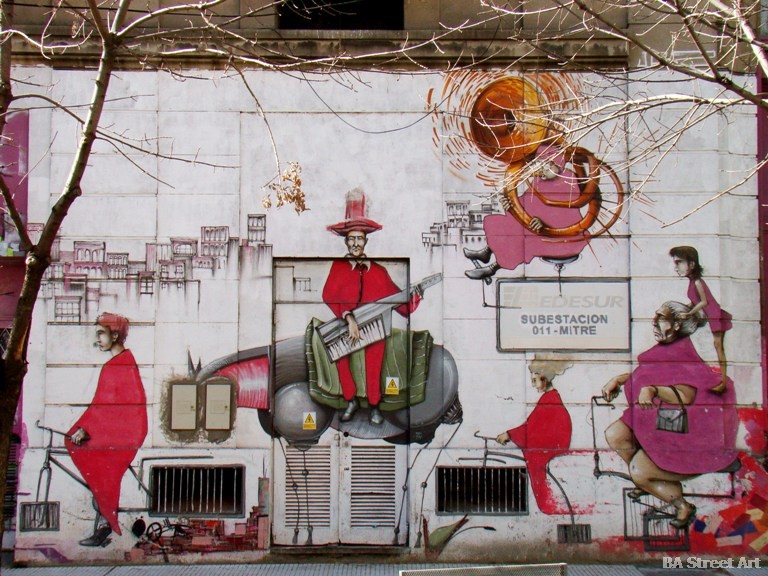 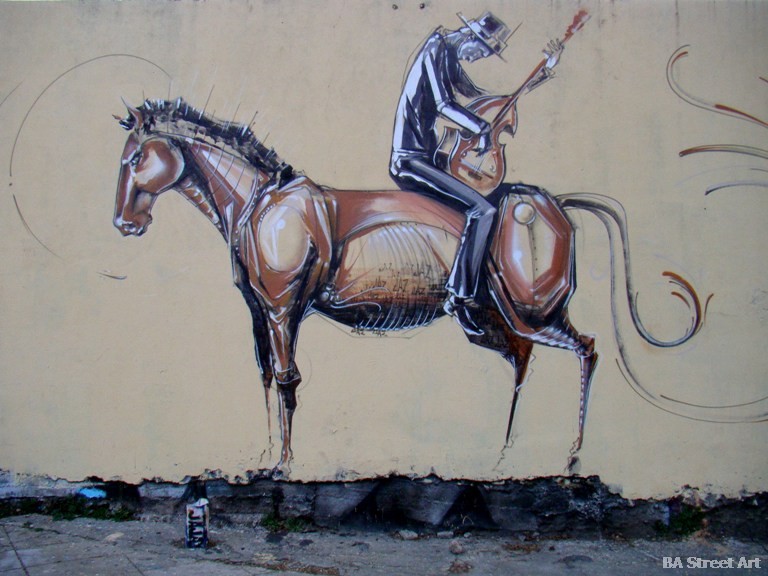 Jaz’s artworks from 2009 have featured more animals and in particular donkeys. “Simply when I paint animals it’s a vehicle to enjoying painting. It’s the act of painting rather than an idea or a concept. An image captures my imagination and it’s the painting that excites me rather than looking for a meaning or an ideology. Animals are very neutral, without profile, without any particular attitude and it’s the act of painting them sensitively. Then there are human characters and how they mix together, they are a different challenge and tend to require more thought.” 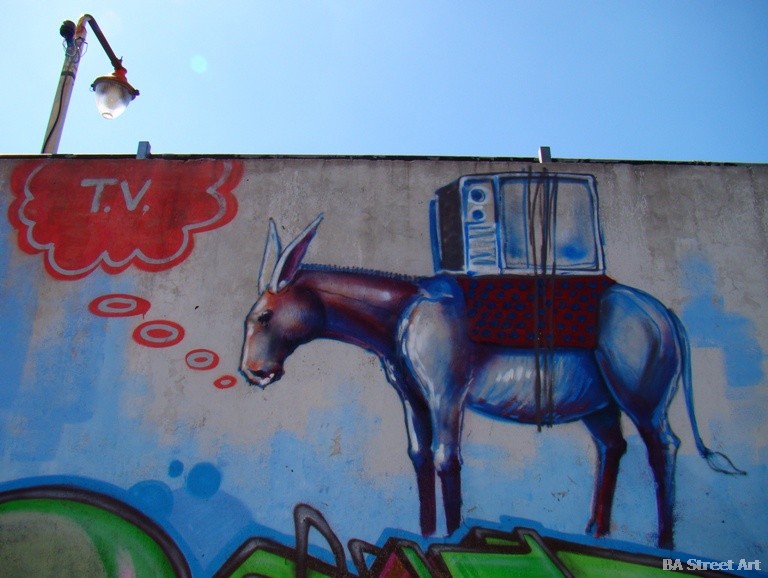 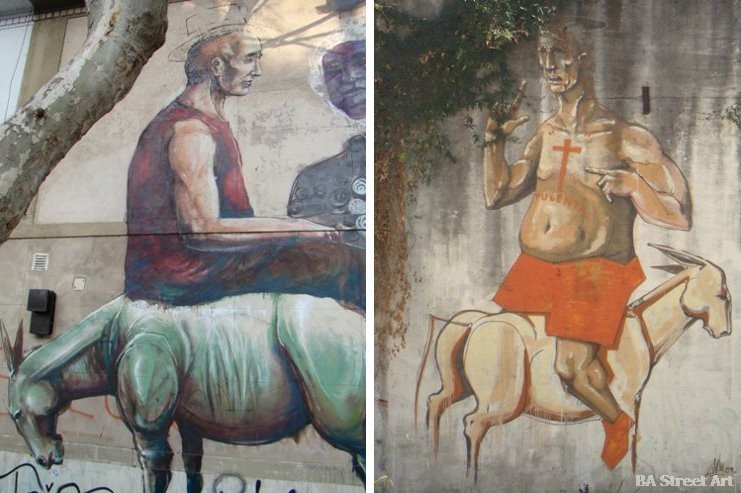 Jaz studied scenography at the Instituto del Teatro Colón and also works as a set designer. At the IUNA (Instituto Universitario Naciónal de Arte)  he learnt disciplines such as painting, drawing and ceramics that have had a deep impact on his street art. “My principle objective is to paint but I am still studying and trying other things and other styles of painting to take to the street because if you work with one idea or perspective such as street art or graffiti it leaves you very limited.” 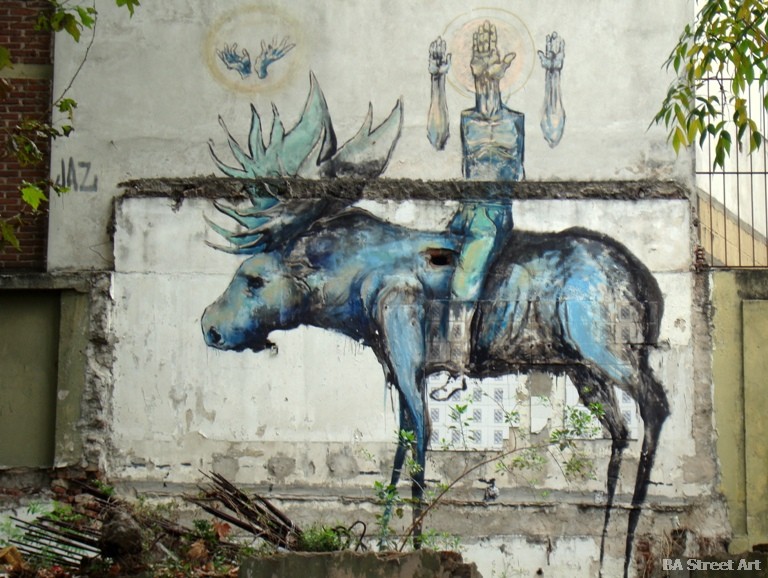 Many of Jaz’s recent artworks depict fighting scenes featuring characters with human bodies and the heads of wild animals such as wolves and lions. They include influences from ‘lucha libre’ (Mexican wrestling with masks), sumo, football hooliganism and other forms of fighting. “They are not in favour of violence nor against it,” says Jaz. “Simply I like the image of the stage, it’s not a protest against anything. I think to paint something in protest wouldn’t be honest. It is all very personal to me, something that happens to me with these images. I don’t want to share them or tell them to anybody.” 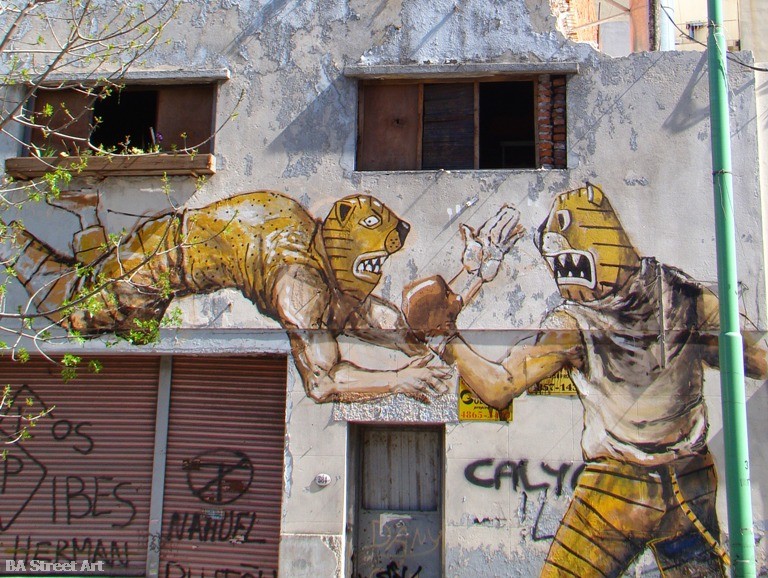 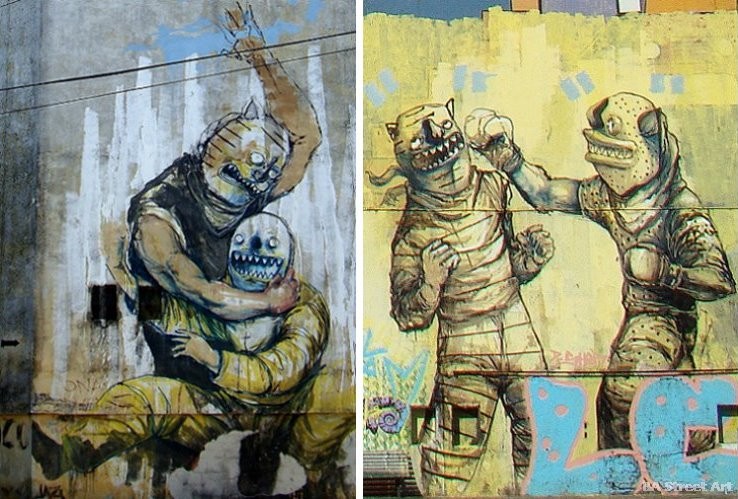 Jaz says there is a professionalism and dedication now that wasn’t present when he and his friends first started out. “In the early days it was simply painting without a clear objective, painting to pass the time with friends in the street. Afterwards we decided we were going to work as artists and then the whole story changed. Now street art has moved on a lot, I don’t know if it’s still the case conceptually but everything has changed in terms of the way of painting and preparing the wall.” 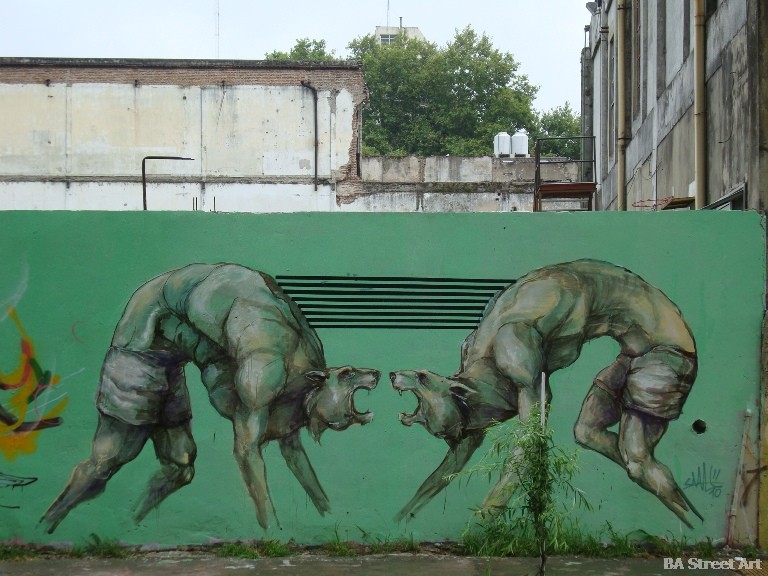 Ever is one artist who has a big influence on Jaz and the two paint together a lot in the street. “We share a workshop together and we have the same perspective about how street art or graffiti has evolved,” says Jaz. “It is a complicated question because a long time ago and when I started out, graffiti was very traditional and was very specific. Not everyone has made the transformation saying that while graffiti continues on one hand, a new movement called street art or urban art has been born. A lot of us are old friends and we share a lot of common ideas, whether it’s organising an exhibition or painting in the street together. We are all working towards the same objective.” 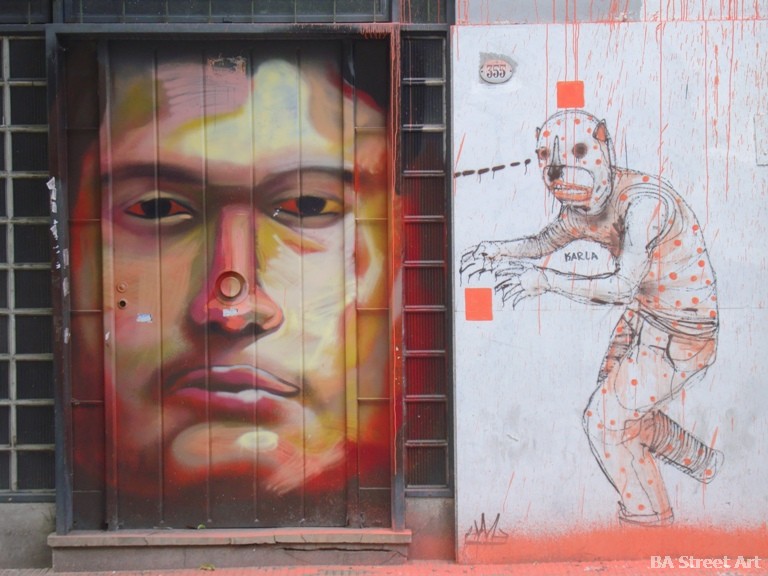 Jaz has developed his own distinct style is now one of many Argentines who has a considerable role to play in what has made Buenos Aires one of the most exciting street art scenes in the world. “It’s very varied,” says Jaz. “There are many people with a traditional view of American graffiti with lettering, also there are a lot of people with different perspectives that work in a different way. There is an enormous freedom to paint. It is very different to other countries in the way the people view art in the street, not for the style of street art or because of one or several artists who are very well known but because of the uncomplicated way in which you can work in the street and this generates a lot of activity.”

Check out more brilliant murals by Jaz at flickr.com/photos/franco-jaz-fasoli/ 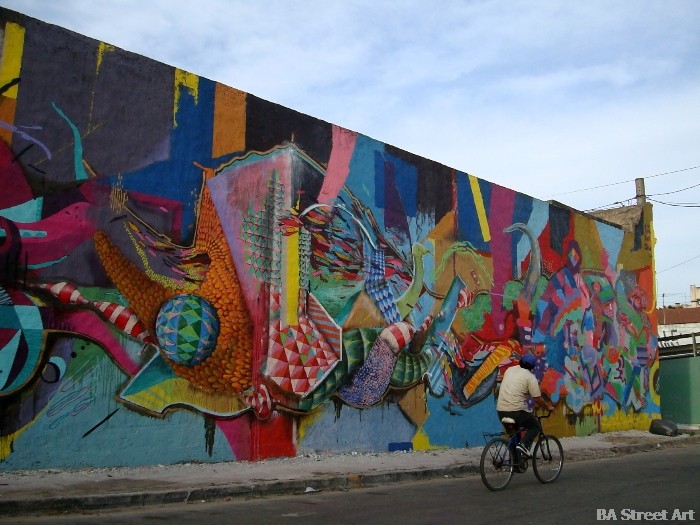 END_OF_DOCUMENT_TOKEN_TO_BE_REPLACED

The Great Wall of Colour by Poeta, Roma and Sam

Giant wall of colour painted by Poeta, Roma and Sam on the facade of an old building in the Provincia... 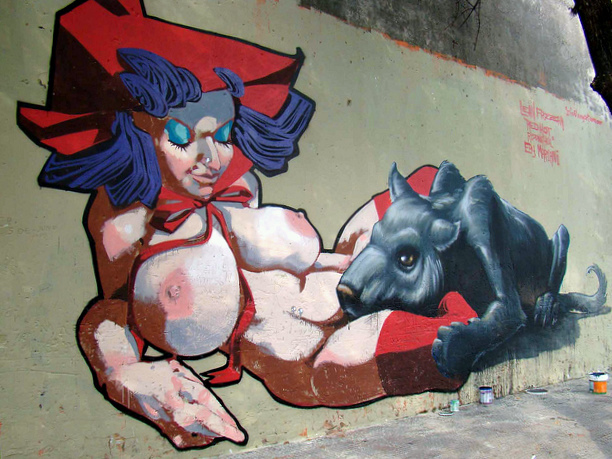 END_OF_DOCUMENT_TOKEN_TO_BE_REPLACED

Argentine street artist Lean Frizzera has been forced to cover up his own mural after a local resident complained that...