Mr Brainwash, the actor in Banksy’s film Exit Through the Gift Shop, has painted two new stencils along Sunset Boulevard in LA. The artworks appeared just before the Oscars ceremony during which Banksy’s movie lost out in the category of best documentary feature.

One stencil depicts Banksy with a hooded top superimposed on an Oscars statuette, the other design features a boy taking a photo with a retro camera. 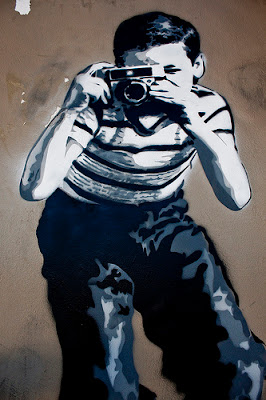 You can see more great photos of works by Banksy and Mr Brainwash on B.Land’s flickr page