Paco is the cheap killer drug that is wrecking the lives of thousands of youngsters with an estimated 180,000 users in Argentina. Referred to as ‘the drug of the poor’ as it costs just a few pesos a hit, paco has become an epidemic that is sweeping through the slums of Buenos Aires and is now affecting the middle classes and adult population. 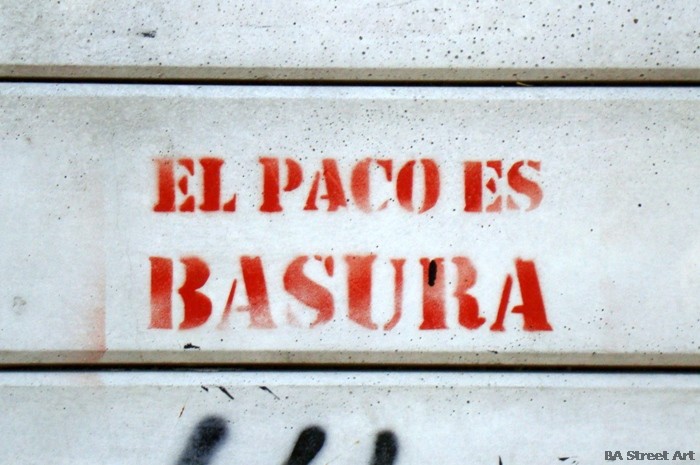 In the neighbourhood of La Boca, three or four youngsters die a week as victims of paco according to the campaign group Madres en lucha, and more and more are turning to crime to feed their habit. Also known as cocaine paste or pasta base, Paco is essentially the by-product or the ‘rubbish’ (basura) left behind by the cocaine-making process during which coca leaves are mixed with sulphuric acid, and solvents like benzene, ether and kerosene. It’s these highly toxic chemicals in the raw cocaine paste mixed together with substances such as glue, rat poison and crushed glass that makes the drug so deadly. 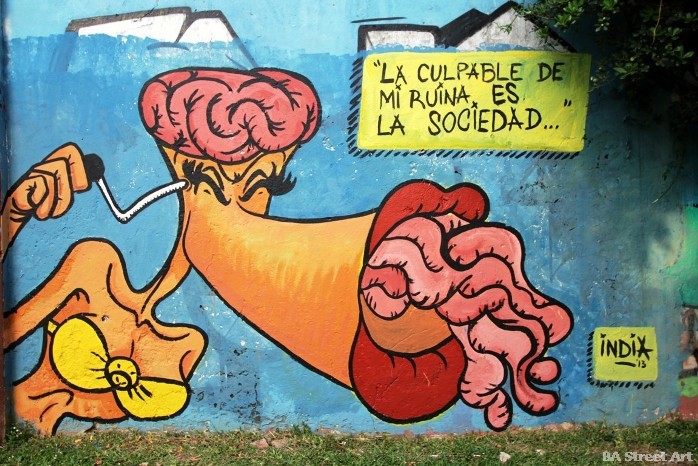 Brain damage – mural by India about the harmful effects of paco saying: “Society is to blame for my ruin”

Paco is usually smoked through metal pipes and can be mixed with tobacco or marujana. It produces an intense high that lasts only a few minutes and users are then desperate for another fix. Many of these addicts will have up to 70 hits a day and go on binges lasting three or four days without sleep. Their lives become so consumed by the drug that these kids are often described as ‘zombies’ or ‘the living dead’. 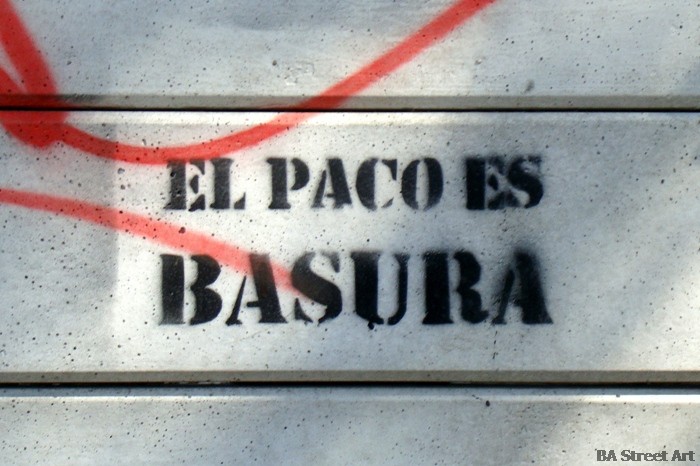 A stencil close to Villa 21 in Barracas

Stencil graffiti painted near slums around Buenos Aires has been used as a way to highlight the damage paco can do.

Paco didn’t exist ten years ago because cocaine used to be trafficked to Argentina from countries like Columbia, Bolivia and Peru in the powdered form. The residue then started to appear after the arrival of cocaine kitchens in the slums and outskirts of the capital. 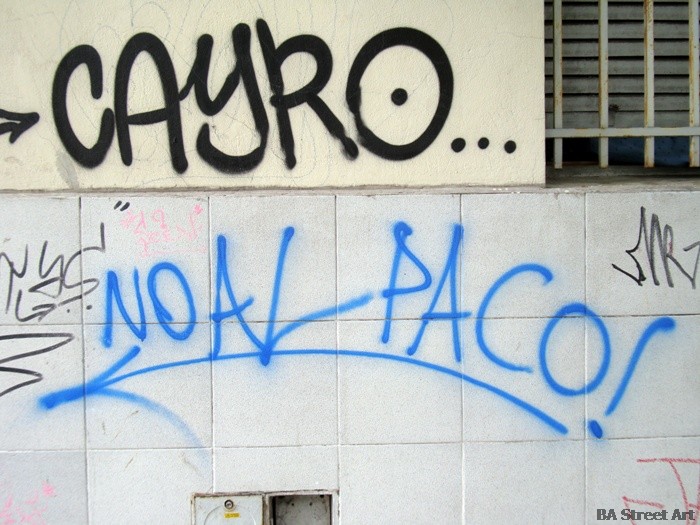 More graffiti against the drug

According to Nélida Ortega, director of Casa Puerto, a government centre that helps juvenile addicts, the drug dealers had a clear marketing strategy to get the poor hooked on paco. She says: “In 1996 or 1997 for one month, in the slum of Villa Zabaleta, no cocaine was sold and only paco was distributed. The most marginalised were the target: one dose cost one peso.” The drug now costs about 15 pesos a gram and paco addiction is widespread in slums like Villa 21 in Barracas. 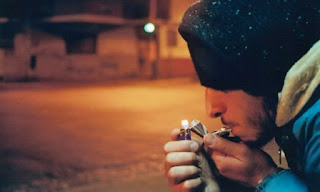 While users of other drugs such as cocaine and ecstasy may suffer long-term health effects from long-term use, paco causes severe problems almost immediately. Dr Eduardo Kallina, a leading medical expert on the effects of drug addiction in South America, said: “It attacks the front part of your brain which controls your personality, your sense of right and wrong, your conscience, your aggression… addicts regress as if they were animals, like apes or Neanderthals.”
Paco also causes addicts to lose their appetite and many suffer with weight problems and burnt lips from using the metal pipes.

A 19-year-old ex-addict referred to as ‘D’ laid bare what it was like living with the killer drug in a recent interview with Clarín .
“I started taking it in seventh grade (aged 12). First marijuana, then cocaine. From there I took ketamine, pills, chloroethane, cocaine paste, just about everything. Did I know about the drugs? No. My parents found out when I hit rock bottom.
“I started one Thursday and I went without sleep until Monday. I grabbed some cigarettes and put in some cocaine paste and ash and smoked about 20 in two hours. That day I imagined that I saw three kids following me and one had shown me a gun. I convinced some friends and we went to look for them. We grabbed one of them and we beat him up.

“Afterwards came the halucinations that I was being chased. I saw police cars going the wrong way down the street and they were looking for me. I ran. I got back to my room and closed my eyes. When I opened them I fell over and bumped into the wardrobe. I started to see faces in the floor that were laughing. They were laughing at me.
“I opened my eyes and thought: “I’m losing control, I’m losing control, I am dying of an overdose, I’m dying. I couldn’t speak. I started to hit the wardrobe and punch the floor. That was how my parents found me. That night lasted five days and I spent 1,600 pesos (US$400) on drugs.”

‘D’ has now kicked the habit after five months and two days following treatment at Casa Flores – a day centre for paco addicts.
(text has been translated from original interview in Spanish) 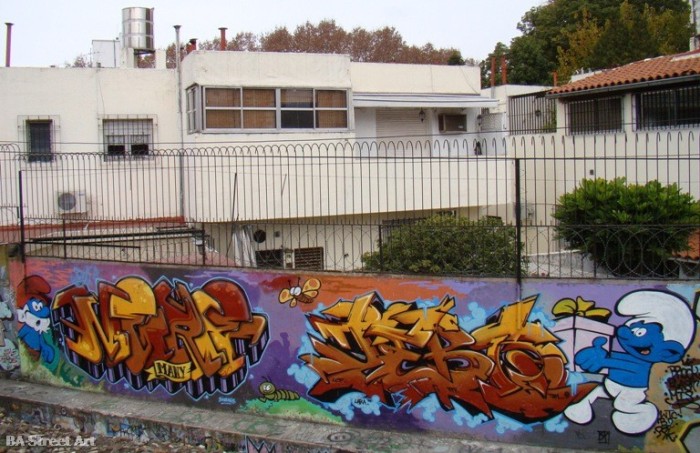 END_OF_DOCUMENT_TOKEN_TO_BE_REPLACED

The Simpsons, Beavis and Butthead, Futurama, The Smurfs, Crazy Legs Crane, Woody from Toy Story, Super Mario and Alf are... 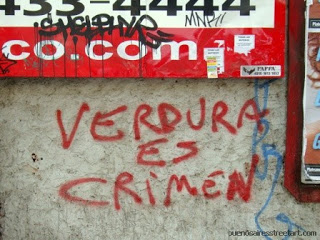 END_OF_DOCUMENT_TOKEN_TO_BE_REPLACED

La revancha: Vegetable is crime We think the author of this graffiti is a little fed up with vegans telling...

2 replies on “Paco: Sleeping with the enemy”