A couple of weeks ago Guache and El Marian finished a new mural at El Quetzal, Palermo. The artists talked with BA Street Art about the project.

The mural is called “We are the Color of the Earth,” after a quote from the former Subcomandante Marcos of the Mexican Zapatista resistance movement. The strength and dignity of the people of Latin America in their fight against oppression and inequality is a theme that resonates strongly with both artists. El Marian takes inspiration from the urban protest and paints portraits of protesters, picketers and Zapatistas. Guache’s approach is through symbols and images that represent the indigenous peoples of Latin America and their deep ties to the earth. 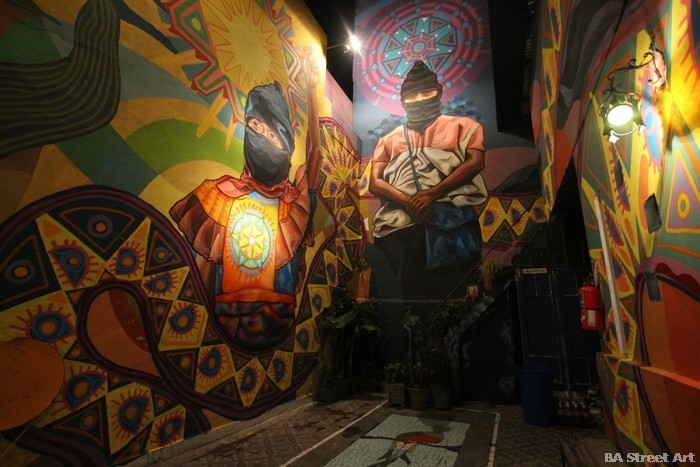 “We are the Color of the Earth”

The two were invited to paint in the cultural center in Buenos Aires where each year a new mural is created, bringing new life to the space and supporting different artists. The walls of El Quetzal hold many layers and histories of artistic collaboration, something that’s very abundant in the local urban art scene where diverse styles and themes enter in dialogue on the walls. 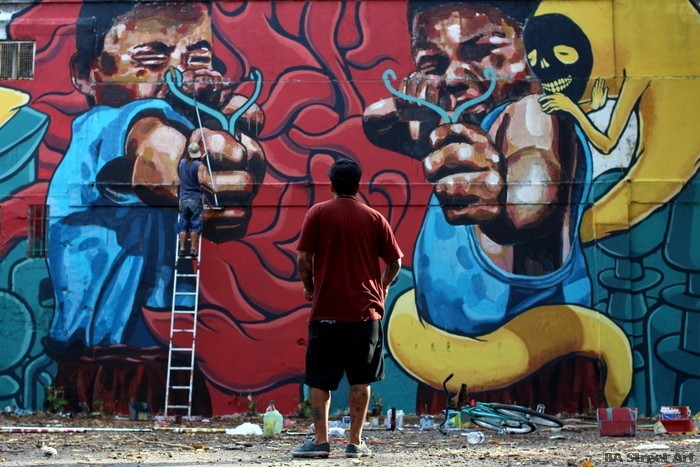 Collaboration between El Marian and Gualicho (2014)

El Marian has painted more than 20 murals in the city over the past couple of years, including many collaborations (like this one in Villa Urquiza with Gualicho). “I always like to paint with someone; it’s nice to mix everything together,” says Marian. To plan the design for El Quetzal, the two artists got together the day before they started to paint. El Marian explains: “Each of us brought images but we knew more or less what we were going for… and actually we still don’t have a totally clear plan but it’ll start to come together in the next few days!” 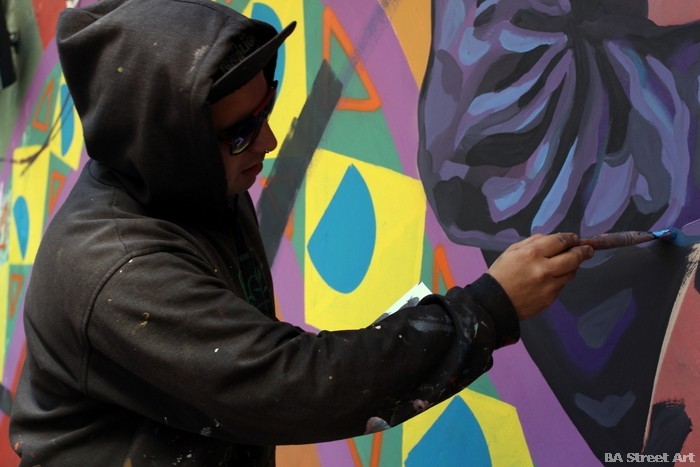 Guache more often works alone than with other artists, but this collaboration has a particular significance for him. “I feel that it has to do with the theme and the combination of techniques,” he says. And the fusion of their two styles is notable – Guache with his vivid colors, animals and abstract geometrical forms; El Marian with his muted tones, heavy brushstrokes and human figures. And above all, says Guache: “There’s a central theme related to resistance and identity.” 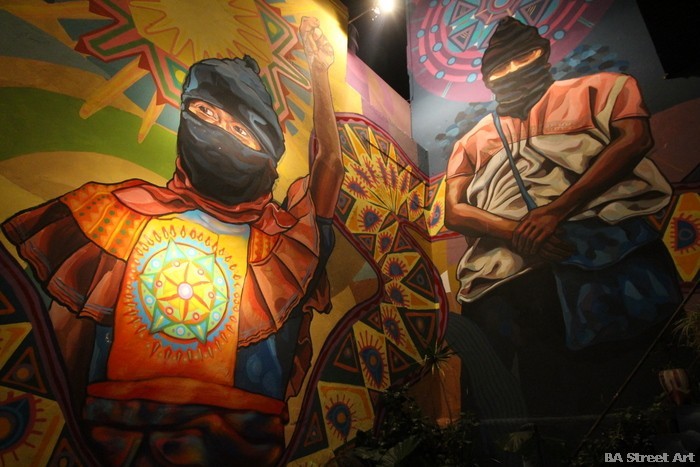 He explains: “‘We are the Color of the Earth’ refers precisely to the holistic dimension of resistance, not just the kind of resistance that implies clashes or violence, but the broader act of going against a system. And it’s more than being against something because resistance is also the act of constructing a proposal for a new culture based in solidarity, equality and equity…” 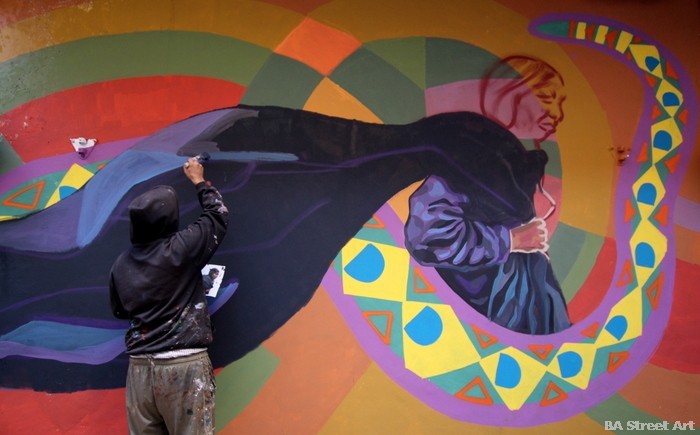 El Marian saw art in the street when he was a kid, but he didn’t start to paint walls until just four years ago. He always painted and drew, and in fact recounts: “They fired me from a job because I was caught painting, and from there I told myself, that’s it – I’m going to paint in the street. I then started to paint with some other artists. I paint in the street because it’s a space that belongs to everyone.” 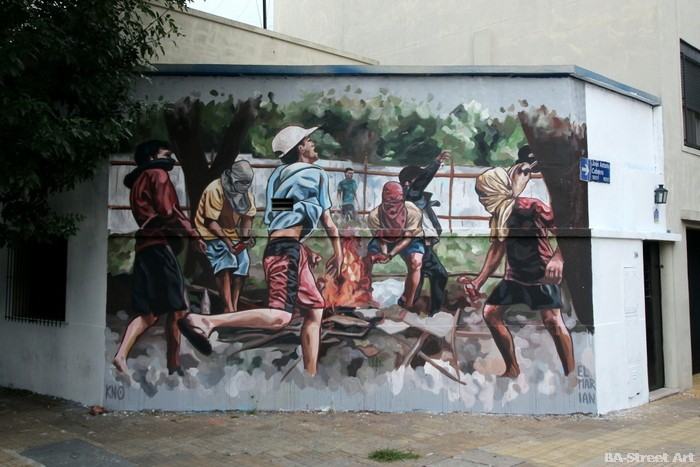 El Marian doesn’t like to talk about what he does. He sums it up like this: “Painting is what I do well, and it’s my way of showing what I think.” And what does he paint? “I always paint children, dogs or police set on fire.” An important theme for El Marian is resistance, and he paints many children as urban protesters, their faces covered by bandanas or throwing Molotov cocktails. 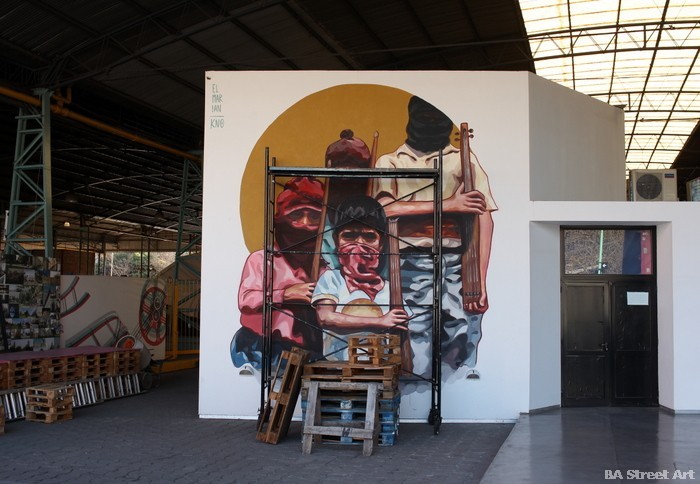 El Marian continues: “I like images that represent resistance, and it’s important to not just paint guys making trouble on the streets, but to show another side – family, children…” He puts the identity of protesters in context to show that they’re not delinquents or troublemakers, but that often they’re young people fighting for a better future. El Marian’s work deconstructs labels about the people who participate in urban resistance, humanizing them and showing that they want to build a better world. 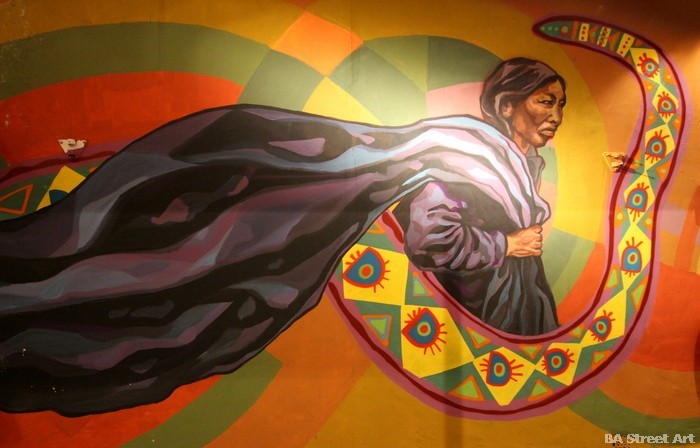 A neighbor of El Quetzal painted by El Marian

Guache and his community work

Guache draws his style from indigenous culture and also paints images related to families, women and children. “What I paint is a mix between classic Latin American muralism on one side and influences from graffiti and street art on the other. I also like to paint abstract images that come from traditional indigenous culture. The indigenous communities in the Amazon use a lot of symbolism and make references to sacred plants like the ayahuasca. These symbols are in the bright colors that they use for their woven crafts, their traditional mysticism, and also all of the natural colors.” His commitment to human rights and to the people of Latin America brought Guache to travel throughout the continent, from Colombia to Peru, Ecuador and Mexico, painting and also doing intensive projects in communities. He tells us: “They’re collective muralism projects related to memory. Collective muralism is a process in which the final product is not the objective – the idea is not to create an aesthetic piece above all else, but instead to focus on the process of empowerment and transformation within the community. The people retake, reconfigure and reconstruct public spaces symbolically, often painting representations of local histories and figures.” 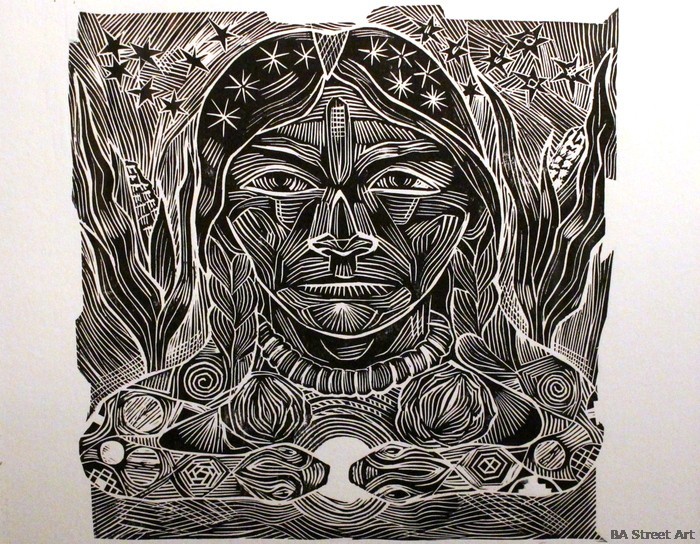 Guache emphasizes the socially transformative capacity of muralism: “It symbolically transforms spaces, and for me, above all, it is crucial to be able to humanize and raise awareness about people who are in violent contexts. So what I do is try to raise awareness to transform… in small steps! I don’t expect that people will see a mural and say ‘okay, let’s have a revolution!’ but instead for it to be something more subtle.” In this way, public art forms part of its context while simultaneously responding to that context. 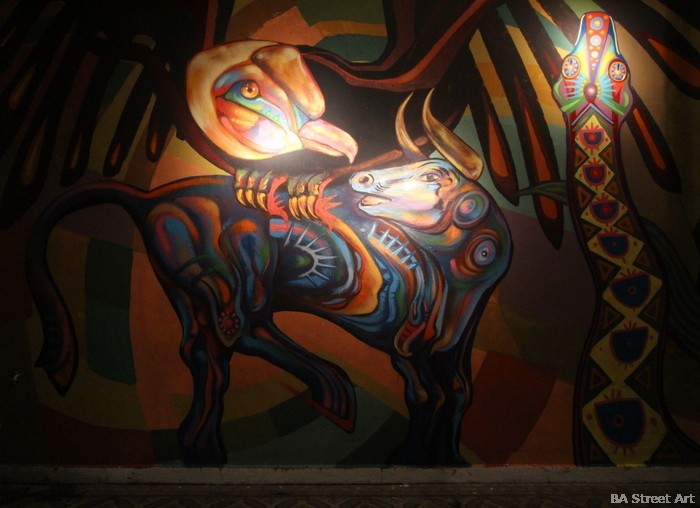 Guache and El Marian see their work as a form of connecting with the real, the natural and the human in their urban landscape. Guache says: “Our themes may seem a bit anachronistic, because we’re using earth colors, painting Zapatistas, corn, geometry, the sun – all basic things that escape us in contemporary city life. We’re disconnected from the natural world and so these themes can seem like they don’t belong when they’re really the most fundamental.”
He continues: “I believe that art, regardless of its form, whether it’s music, theater, literature, etcetera, has to propose something. It’s necessary for art to say things, to have metaphors and symbols.”

Mural in Coghlan by Guache and MPC

Painting in Colombia and the scene in Bogotá

“It’s amazing to paint in Buenos Aires,” says Guache. Here artists have a lot of freedom and for the past few years street art has been well received by the public. Now Bogotá too has a large street art scene, but it has been a gradual process since more marginalized beginnings. “Even though it’s much easier to paint in Bogotá and in Colombia now, that’s because there was a transformation,” explains Guache. “Ten years ago it was very illegal, penalized, much more clandestine.” Change occurred in parallel with the political history of Colombia, which was “a very violent and radical history. There was violence, inequality, and that’s reflected a bit in the way we learned to paint in the street.” 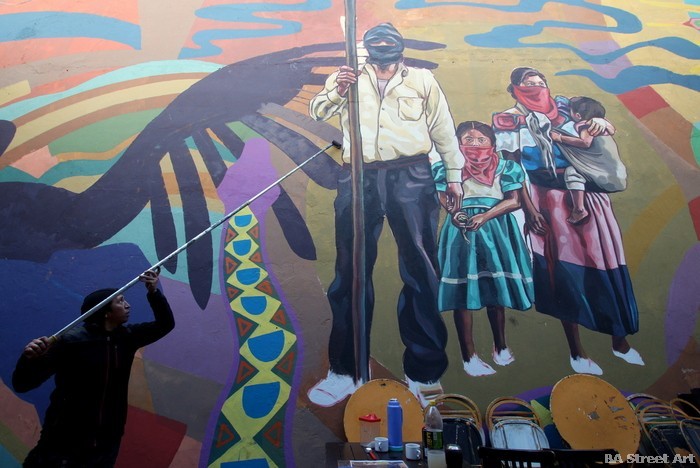 Guache painting with an extension pole

Some of the changes in Colombian laws surrounding graffiti had to do with specific events, like the death of Diego Felipe Becerra in 2011 at the hands of police who caught him painting a wall. Guache recalls: “Five years ago they killed a kid who was painting graffiti in Bogotá, and that sparked a whole wave of protests that ended up bringing visibility to the movement. Also some government representatives on the left helped to open up public spaces and popularize street art as a practice.” 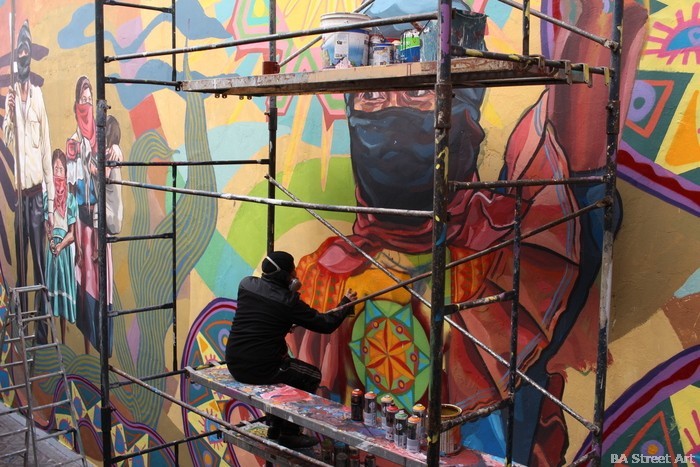 Guache’s first influences came from modern graffiti and illegal painting in public spaces. “It’s been a journey for me, because I started painting many years ago.” When he was just starting out: “Above all, I painted in the street with graffiti artists, but I painted other things, did some bombing, but with characters and phrases, not letters…” He also has an academic artistic background and has worked as a design professor. He paints with varied techniques (paintbrushes, rollers, extension poles and aerosol). 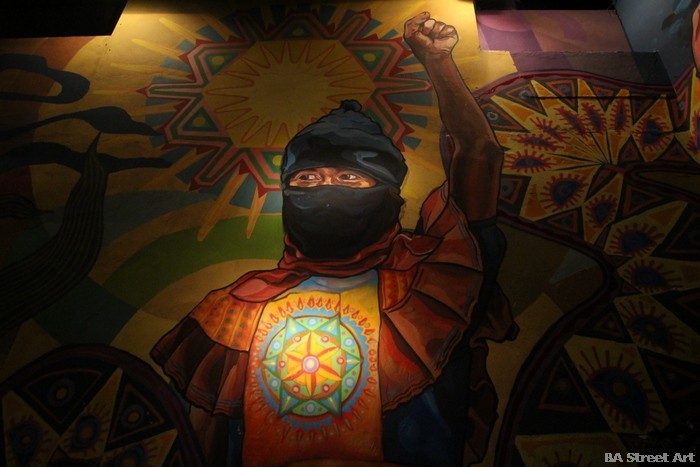 Guache: “In Colombia, graffiti is a manifestation of urban life.”

Graffiti, says Guache, “is a manifestation of urban life. We’re jammed into molds of cities like this one or Bogotá, Lima, or México [DF], where nobody knows anybody else, there are enormous amounts of inequality and people work too much.” Now, he says, there’s an aesthetic debate about whether the painted letters of graffiti have artistic value. “When I do projects with the state or the municipalities… they tell me that ‘what you do is beautiful and legitimate because it’s muralism, but what these other people do is vandalism – it’s illegal, it’s illegitimate and it’s ugly.’ For me it’s not like that… because painting illegally is what’s real. Graffiti doesn’t care if it’s considered art – it doesn’t care about anything. And that’s the biggest transgression.”

He continues: “It’s almost like a kind of modern existentialism. It’s the cry of ‘I’m here.’ So I respect graffiti a lot, I like it for reasons beyond aesthetics. I can’t make a value judgment about a style or say if it’s good or bad, beautiful or ugly, because graffiti is graffiti. It’s the act of transgression and of leaving your mark.”