Saile was in Buenos Aires for Meeting of Styles 2012 and painted a brilliant new intervention in Barracas. The Chilean artist is a member of the Stgo Under Crew which first formed in 2000, and spoke with Buenos Aires Street Art  about how he first got into graffiti, his crew and about some of the elements in his art. Tell us why are you called Saile and a little bit about how you got into graffiti?

“My second name is Elias so all my friends call me Saile. Simply if you turn around Saile it spells my tag. I used to draw a lot when I was little and I started to paint at the end of 1996 and 1997. I have  been painting for 16 years now. When I was younger I would always hang out with my brother and  his friends. His tag is 78 and he was also painting (graffiti) and I would keep him company at certain events and paint.  Then aged 13, I started doing throw-ups and tags. I still paint letters but it’s mostly bombing. In Chile, (when painting graffiti) the law in Chile is a bit tougher, to avoid getting in trouble is a bit more difficult if you  break the law, in general.” 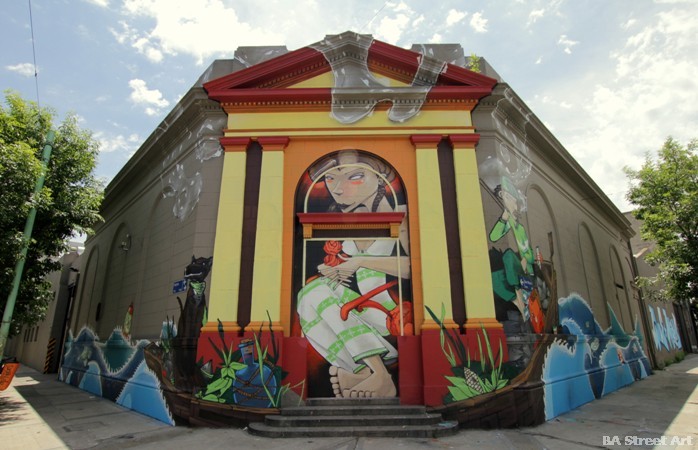 Tell us a bit about Stgo Under Crew and the guys you paint with?

At the moment there’s Fisek, Inti, Hes, La Robot de Madera, Rdg1, Myre and Mecho. We all work independently most of the time. We get together when we are working on projects or a big wall for a festival and these types of events. We are independent, we have very different styles and were are also from different places. We all started on our own paths and got together when we were older and the paths we are now taking are established.” “Really I’m taking advantage of the architecture of the building and taking advantage of what it offers me. and taking the main geometry as a base. Later I see the forms that it gives me  which I transformed into a house on top of a boat on the sea, also things  started to appear during the process, ideas arose and I am creating the story while I am painting.” Can you tell us about the theme in the artwork?

“There’s a bit of a message but still I am not looking so much towards anything really political. However for a short time now there have been problems with the fishing laws in Chile. The are passing new laws against traditional fishing, and they are giving everything  to big industry and a lot of people are out of work due to laws that are always written in favour of the big companies. There is a problem with monopolies in all the Chilean sea and it affects many people, and a lot of villages and cities along the coast, and I am trying to support the local fishermen a little.” Are political messages something that often appear in your artworks?

“Sometimes perhaps there is a little bit about what is actually going on at the time. It’s more when  you lend yourself to making big artworks and with more time and content. I think that  (what I paint) it’s not so much about South America but is more about  what is happening at the moment in Chile and I’m tackling it a bit more. The strongest issue now is still education and it affects everyone in Chile, from the coast to the mountains.  There aren’t that many political elements (in graffiti in Chile) it’s more on the side of the guys who do murals. I think it’s more of a protest about problems such as the lands of the south and the pollution in the north of the country going on now. It’s a form of protest as well, a protest about the things that are happening at the moment. Things are happening right now, and each time there are happening with more force and the people are going to have their say.”

Graffiti by Saile and 78 painted last week in Buenos Aires

Why do you paint in the street?

“Because I started doing graffiti and fell in love with it, the people, the scene etc. Afterwards I was making murals and bigger productions. I believe that also (when you paint in the street) it is as if you are giving something to the people. In Chile, I was born in a working class neighbourhood and I had seen how people’s lives have been brightened up when they see a bit of colour every day, the people really value art and see themselves reflected in it. In the art world in Chile there are always monopolies of money and it hardly ever gets through to the middle and lower classes. The social classes are really separated unlike in Buenos Aires and a limited amount of information gets through. I think that with everything mixed together in Argentina, people of all classes receive the same information in the street and they value more what street art is.” Saile with Inti and Hes in Valparaíso (2010)

When did you start painting murals on a large scale and can you tell us about your amazing mural (above) at the Valparaíso Graffiti Porteño Festival in 2010 ?

“I’ve been painting large productions for about eight years but murals with details for some four years perhaps. Before they were just a character on a big scale but without too many details.  Now I have the appetite to paint more things. The wall in the port in Valparaíso (painted with Hes and Inti),it’s one of the biggest murals that we have painted together. We based it on nature, and in the centre is a tree with the earth like Mother Nature, with a bit of Mayan prophecy in some of the details that Hes added, along with elements from South American culture such as the man-made boats from Bolivia, together with symbols and things like that.” And what’s it been like taking part in MOS and being in Buenos Aires?

“It’s been great.  I arrived the same day as the Meeting so I went straight here and started to paint and I haven’t moved since. I’m looking forward to get to know more of the guys who are taking part in MOS and seeing a bit more of Buenos Aires.”

Graffiti by Fisek and Nerf in Buenos Aires

Have you and your crew painted in Buenos Aires before?

“The last time I came  here was in 2008, I was here alone and painted a couple of walls with some friends but everything was more graffiti. I spent only a few days here and this time I want to enjoy the city a bit more. Fisek has also been to Buenos Aires a couple of times but we weren’t together.”