Designs featuring stunning landscapes, hearts, cyclops monsters and a sensitivity for the natural world around him are hallmarks of the works of Argentine graffiti artist Bater. What makes his skills even more remarkable is his ability to bring together talented artists and friends to create stunning collaborations. 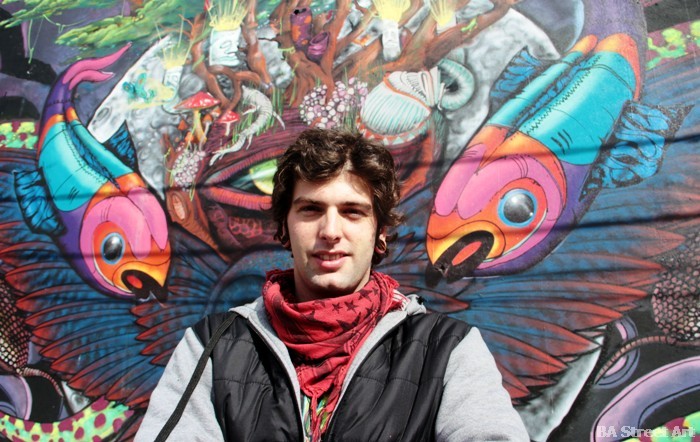 Bater first started painting in the street in 2002 aged just 13 and was heavily influenced by old school graffiti. “I used to live in the city of Buenos Aires but then we moved to San Isidro,” he recalls. “I used to spend most of the day in the street skateboarding or on my bike and that’s how I started to look at the walls. I would go to school thinking about painting and when I finished classes I’d go to the train tracks to paint tags and letters.” Four years later Bater met Heis (one of the two original members of the THG crew) who was one of the first graffiti writers in the northern zone of Buenos Aires. Around the same time he also met the other members of the crew Tekaz, Gone and Apste. 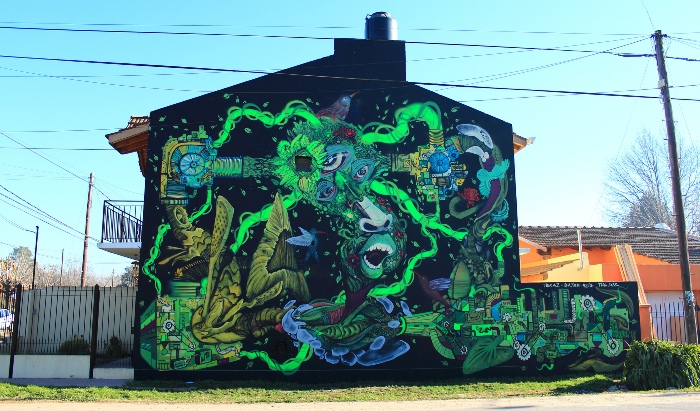 Bater’s influences also come from the world of traditional painting. He names 16th century Flemish masters Pieter Bruegel and Hiëronymus Bosch, famous for their complex compositions featuring crowds of creatures and characters; and German surrealist artist Max Ernst as the painters he admires the most. You can also draw some likenesses in Bater’s work with that of U.S. painter Todd Schoor and his cartoon-like imagery often depicting dwarves, giants, monsters and characters from fantasy worlds. But the person who most inspired Bater to become an artist is much closer to home, the celebrated Argentine painter Duilio Pierri.” My father is a good friend of his,” Bater explained. “Ever since I was a small boy I remember going to Duilio’s studio and looking at his enormous paintings and it left a huge impression on me. From that moment onwards I wanted to paint just like him.” 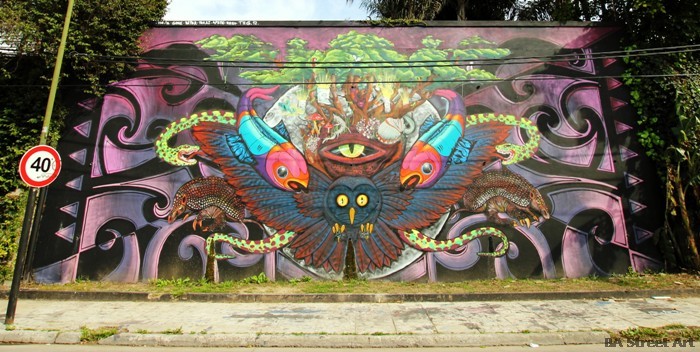 One of the most spectacular artworks Bater has painted recently is a giant wall with Tekaz, Heis, Apste, Resu and Gone (above) near San Isidro in the Province of Buenos Aires. It features a fantastic woodland scene abundant with wildlife native to Argentina and at its centre is a heart that is its life and energy source. “It’s a wall that took us four days and each of us painted what he likes to do but with the idea to make something together,” explained Bater. “There is no point having a great spot to paint and painting on a grand scale if all the elements don’t come together in the right way. The idea was to represent some of the animals from here such as the armadillos and snakes with each of us painting a different part. Heis painted the boa, Gone painted the fishes, Apste did the moon, Resu did the trees that come out of the heart that I painted. When we each finish our task, we help the others, we always paint like that.” 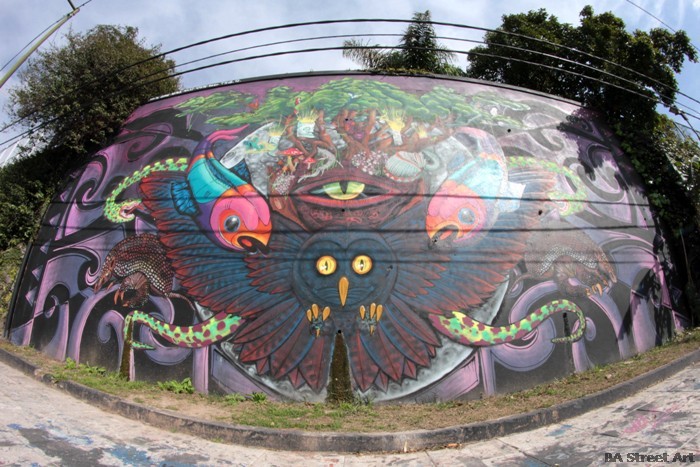 Many artists have huge egos but Bater is remarkably humble. When discussing the incredible woodland mural he painted with his crew, he doesn’t speak in the first person but unassumingly emphasises the importance of a cohesive group with the whole being much more important that the sum of its parts. “The message is about unity with all of us as one trying to paint a wall together,” stresses Bater. “Everyone is on the same level without anyone painting his own piece. It doesn’t matter if the whole wall isn’t painted, the idea is to achieve something that is neat and can be enjoyed by everyone.”

Last November, the international street art festival ‘Meeting of Styles’ came to Buenos Aires for the first time. As the word ‘meeting’ implies the idea was to invite different artists from all over the world to the Argentine capital to paint together and share ideas and influences. It might not come as a surprise that Bater was one of the guys who made the event a great success. And with Oz, Ice, Maur, Cerok, Deimos, Tekaz, Nutt, Heis and Oster, Bater was one of the artists who painted the giant mural (above) at the electrical plant in Colegiales that was the centrepiece of the event.

Land of Fire – part of a mural in Martínez by Bater, Heis, Tekaz and Gone

The natural world is particularly important to Bater and his crew. One topic that is a reoccurring theme in their works is the opposing forces of man and nature. One such mural in Martinez is entitled ‘Tierra del Fuego’ or ‘Land of Fire’ named after the territory in Patagonia that features a number of boats and amphibious machines. Bater explains: “It’s about the indigenous people fighting against technology and that’s what used to happen. The Indians used to cover themselves in whale blubber and set fire to it to keep themselves warm, that’s why the place is called ‘Tierra del Fuego’. In a way it’s still happening today with nature trying to battle against technology.” Green Man – Bater with one of his surreal creations

He added: “All the guys in our crew live near San Isidro in a zone where there are a lot of green spaces and trees and we’ve always painted things relating to nature. Heis loves the water and goes to the river a lot and also has his greenhouse. Apste likes going to (the Rio de la Plata river delta in) Tigre. Each of us has their affinity to nature.”

United – collaboration between Bater and Tekaz

As well as painting together with his crew, Bater also spends a lot of time with his close friend Tekaz (Jeronimo). “What unites us is our love for what we do, we are both artists and together we are striving for better things. We are passionate about what we do with our lives so I think that feeling creates a strong bond between the two of us. When we paint we try to do things together. If one of us has a different style to the other, we try to adapt and complement one another.”

The murals that Tekaz and Bater paint sometimes feature oil rigs or petrol tankers and hearts that represent the earth with veins or arteries pumping and sucking the life blood (oil) out of the sea bed and land. The relationship between technology and the natural environmental are two opposing forces that Bater and Tekaz like to explore in their art. “Jero is showing the industrial side and I’m depicting the natural part,” says Bater. “He’s making the petrol pumps and I’m making the heart made of land. It’s all about returning to nature and thinking about another way to live.” 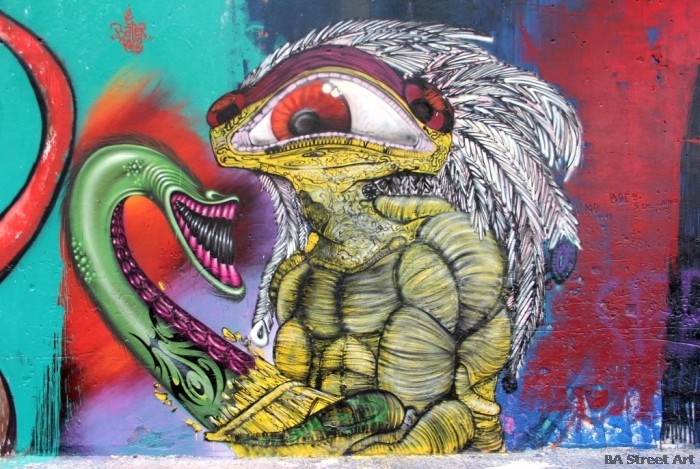 As well as the heart, the eye is another organ and detail that features frequently in Bater’s artworks. He explains: “It’s a look, something to think about and it might appear a little crazy but for me it’s a method of communication, a form of interaction between the person who looks at the wall and the wall or the character itself.” Bater added: “The eye can also symbolize danger as well, it’s saying ‘be conscious and be aware of what you are doing’.” “Ever since I was little I have been painting characters with only one eye,” Bater recalls. He still produces paintings and drawings featuring cyclopses in his studio. “What I was doing was subconscious. I only realised what was happening when I started looking at my artworks more closely and I noticed how many paintings of cyclopses I had done. The theme of the cyclops has evolved a lot since and from it other ideas and concepts have also emerged like the heart.”

“Cyclopses aren’t evil but they are territorial and you don’t want to mess with them,” warns Bater. “They have something powerful inside and can hurt you. Sometimes I like to do things that are a little more provocative and the cyclopses can be dangerous, they are powerful warriors and I like the idea of putting them in the street where they can interact with the people. I also try to adapt them to the environments that they are in. If I go to the beach for example and paint nearby I try to make a cyclops that is more amphibious. I like the idea of working with the materials that you have, the colours and relationship to the surroundings.” 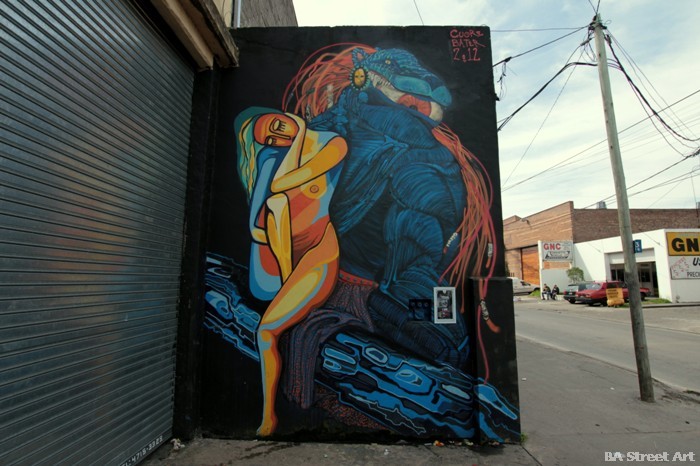 Each of Bater’s cyclops monsters is different and his designs that carry strong influences from both Aztec and Inca culture can be found on the shutters of several garages and stores around San Isidro. 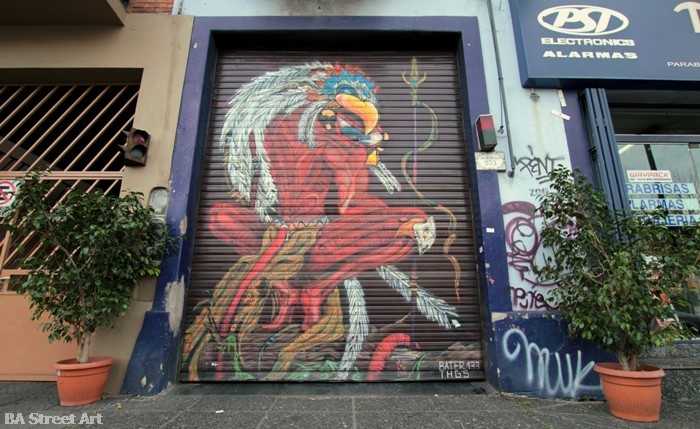 Bater has already painted half a dozen or so monsters and cyclopses near where he lives in San Isidro and he says it’s a project that excites him and one he’s planning to extend with the consent and support of local residents and business owners. “When I speak with people in the neighbourhood I explain that I am working with this theme relating to Latin American culture with the cyclopses and they then understand what I’m trying to do and it brings us closer together. For me the artworks are not just something that is mine but they are something to share with others, and from the moment they give me permission to paint it gives me a lot of satisfaction.” 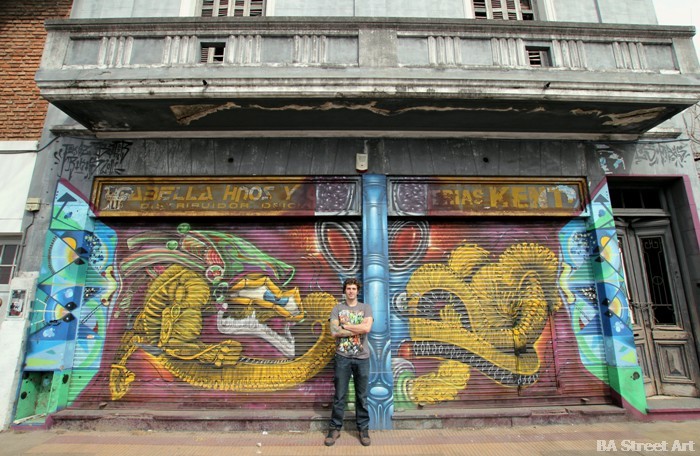 Bater has already got his eye on painting more monsters in San Isidro. “These cyclopses are all part of a series and I’m going to carry on with the project this summer and paint them on more shutters of local businesses,” he reveals. “We’re going to have a small army of cyclopses in the neighbourhood!”

Check out more amazing graffiti by Bater at flickr.com/photos/bater133 END_OF_DOCUMENT_TOKEN_TO_BE_REPLACED

Street art tribute to Adam Yauch (MCA) from the Beastie Boys in Buenos Aires that was painted by El Marian... END_OF_DOCUMENT_TOKEN_TO_BE_REPLACED

Graffiti Wars as Primo mural painted over before it's finished

Street artists Primo have been forced to repaint a new mural all over again after their original design was painted...