Mondo Lila is one of the most recognisable street artists in Argentina. Her artworks featuring cats, scary characters and mutants can be found all over Buenos Aires. She told us how felines have had a profound influence on her life as well as her art. 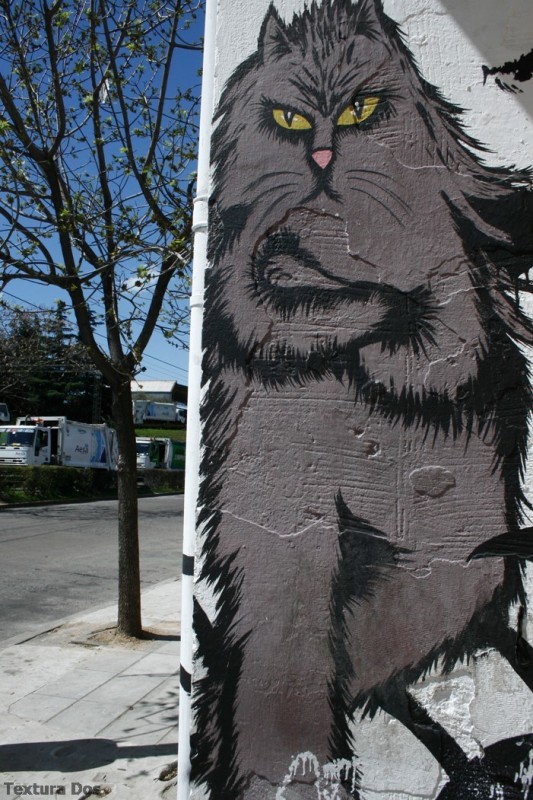 Mondo Lila’s artwork featured in Textura Dos
Why do you like painting cats? “I like to paint cats because the cat has always been my favourite animal. There are lots of characteristics of the cat that I really identify with. On one hand, ever since I was a girl, my family compared me with a cat because of my facial features (It’s true!). And because of this they often call me ‘Michi’ (a nickname for cats in Spanish), and I suppose that’s the reason why I like them so much.”
“On the other hand, the cat is my favourite animal due to his behaviour. How do I explain this? The cat is very ‘genuine’ so to speak. With a dog you can teach it things, with a cat you can’t force it to do anything, it’s still going to do what it wants. The cat is a very independent animal and it’s not demanding. You can love it and it can love you but it’s not needy, it’s a free spirit. It’s also very transparent and it’s obvious when it wants or doesn’t want something. This more than anything makes me really identify with the cat.” 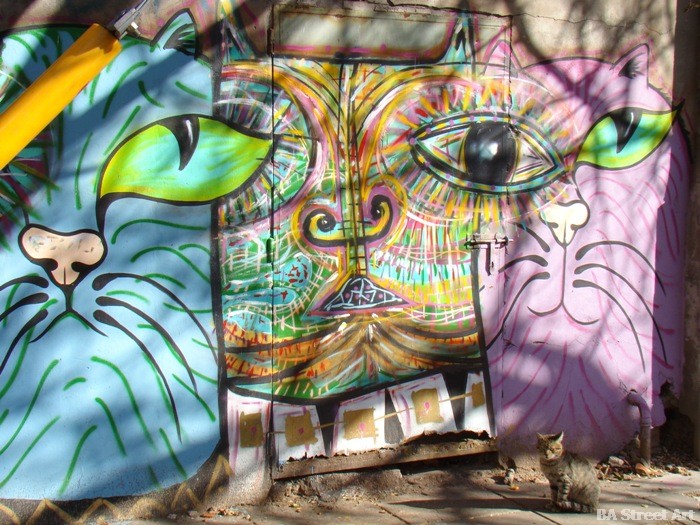 Stray cats by Mondo Lila and Malegria
You have painted a series of cats with Malegria on the site of an abandoned building in Almagro. Tell us about your idea behind this artwork? “In fact it happened by chance. Malegria also used to paint a lot of cats and one day were were chatting and we had an idea for our cats to meet one another! It was a bit of a coincidence that this place was full of cats but unfortunately the building has since been demolished and our artwork is no longer there.” 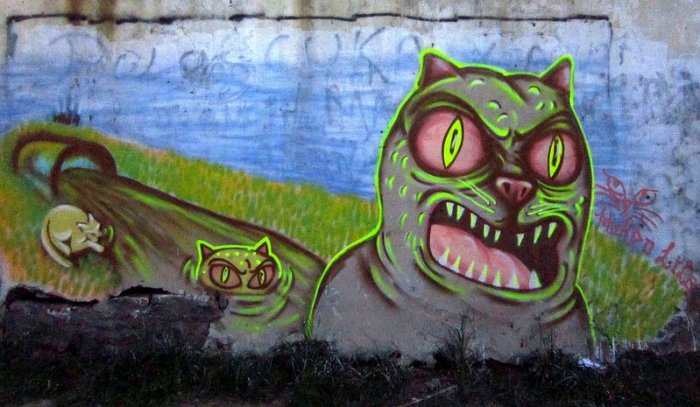 There are a lot of stray cats on the streets of BA. What do you think about the subject and how do you think the problem can be resolved? “On one hand I think it’s ok that we have a cat population in the city because they control pests like rodents and insects. On the other hand the problem is with the bad treatment of animals and people who abandon their pets. I see stray cats that are very sick and I have also witnessed several situations where they’ve been really badly treated. I think that people need to be conscious of the abuse that animals suffer and the harm caused by abandoning their pets. Like everything in life, it’s a question of education.” 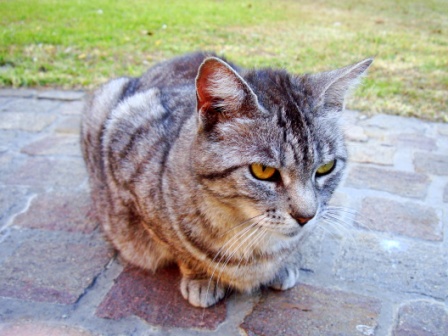 Stray tabby in the ground of the Biblioteca Naciónal
“I think it’s okay that cats are in the street because they help control pests but it’s not okay to abandon pets. I believe that there has to be some measure to stop this happening such as sterilization and/or vaccines for every animal that finds itself in the street. There should also be more adoption campaigns. These campaigns do exist but they are not enough and they don’t have the power to resolve the problem.” 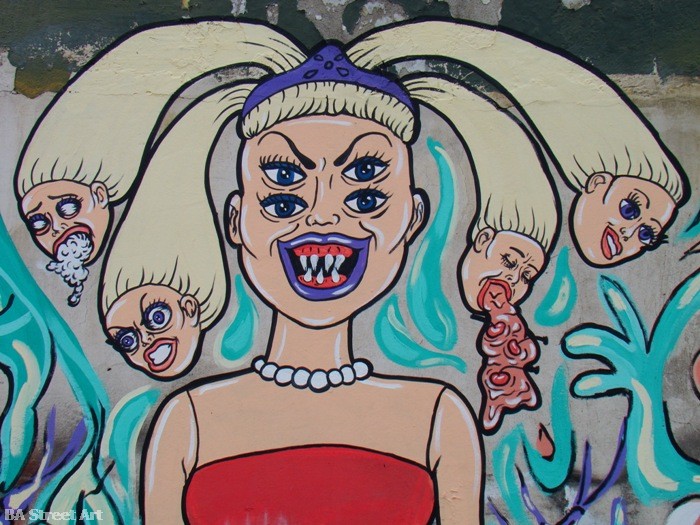 What does your signature featuring a cat mean? “It shows that the cat is my favourite animal and it’s the way that I make myself known.“ 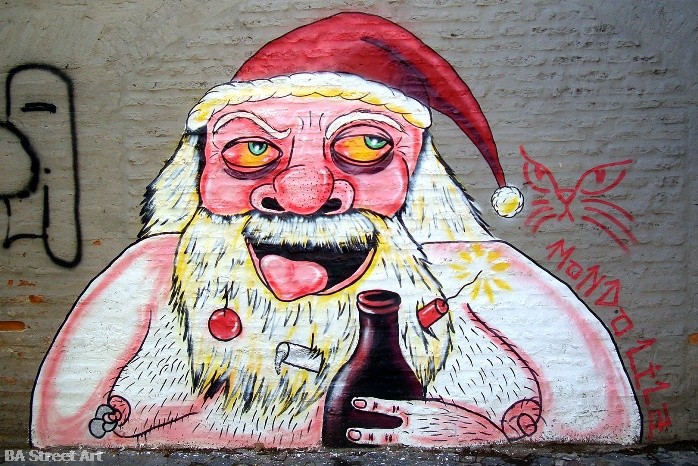 Signature: the cat’s whiskers
Do you have any cats? “I have a little cat and it is a beautiful story to tell. Once upon a time I was riding my bicycle looking for a wall to paint and I saw a kitten on a window sill. I went to stroke it and when I was close to him I saw that he was bleeding. I looked for a cardboard box and then picked him up, and I saw that he had a leg missing and bore the marks of the wheel of a car that had run him over. I took him to a vet and they operated on him and made him better and I stayed with him.” 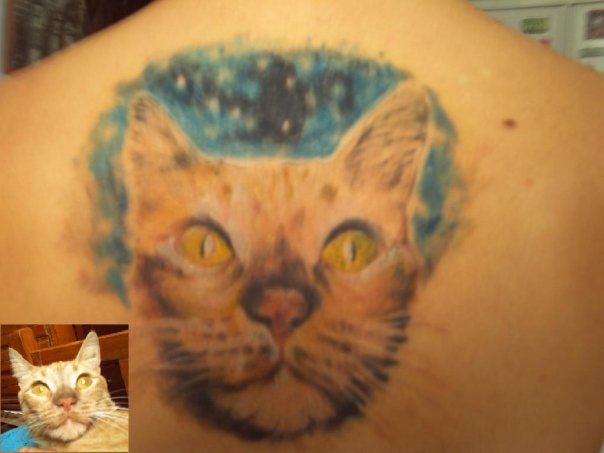 Painted Love: Macabrito
“Sometime before I had painted a character without a leg, and in honour of him I called the kitten ‘Macabrito’ (Little Ghoul). The connection that I have with the cat is very strong and because of this I have a tattoo of his face on my back. I would love to have one more cat but Macabrito is very possessive and jealous, so he is the only one and it will be that way for a long time.”
Check out more of Mondo Lila’s cool designs at http://www.flickr.com/photos/mondolila/ 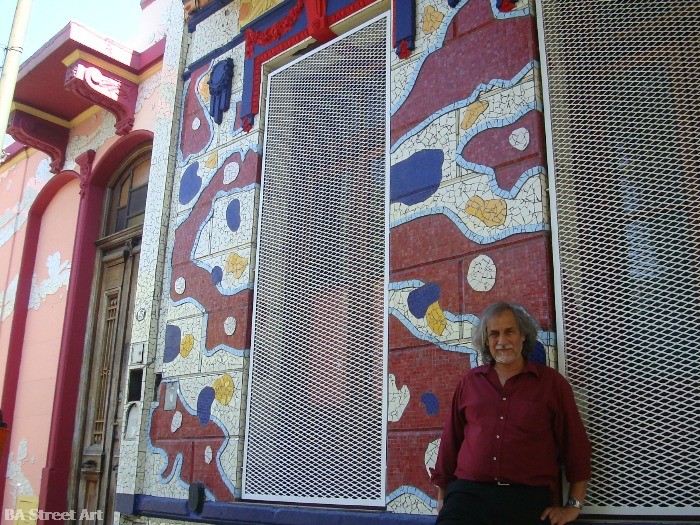 END_OF_DOCUMENT_TOKEN_TO_BE_REPLACED

His iconic murals of Carlos Gardel have lit up Abasto and Marino Santa Maria is now transforming Calle Lanin in...

END_OF_DOCUMENT_TOKEN_TO_BE_REPLACED

Mondo Lila isn’t the only street artist who likes painting cats. Here are some more photos of Buenos Aires street...