Lapiz has painted a moving tribute to his cousin Caroline, 23, who died in a train crash in Germany on October 12 2013. The German stencil artist is based in Buenos Aires and created the artwork in Colegiales a few weeks ago. Caroline Paul was a student at Greifswald University in Germany and went out with friends on a Friday night. After getting home, she went for a bike ride around the next morning and her body was found shortly after by a railway line with her bicycle leaning against a bush. “What she was doing on the train tracks at the time we don’t know,” recalls Lapiz. “I would like to think that she went to watch the sunrise but didn’t see the train coming.” He added: “I couldn’t go to the funeral so doing the stencil was my way of mourning Caro and remembering her. I put it there so I think about her every time I walk past.” 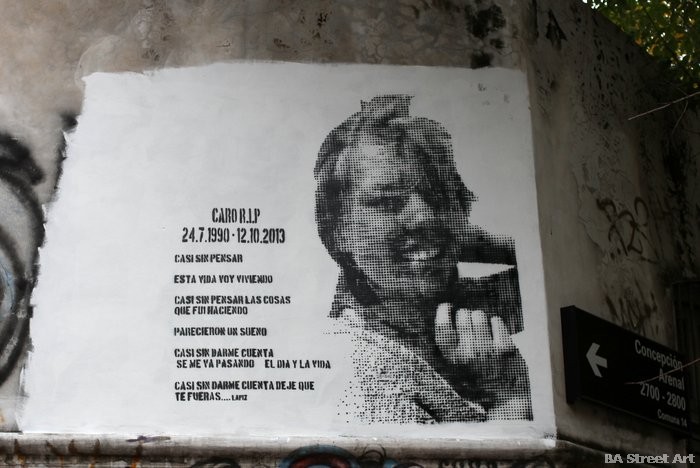 Lyrics from song by Intoxicados

The design also includes lyrics from the song ‘Casi sin pensar’ by the Argentine rock band ‘Intoxicados’. You can check out the stencil on the junction of Concepción Arenal and Cramer in Colegiales.