Mario Abad (Causi 051) has painted a series of eye-catching murals in San Telmo including portraits of rap legends. He spoke with Buenos Aires Street Art about his art in the streets of Buenos Aires and his love for hip hop. 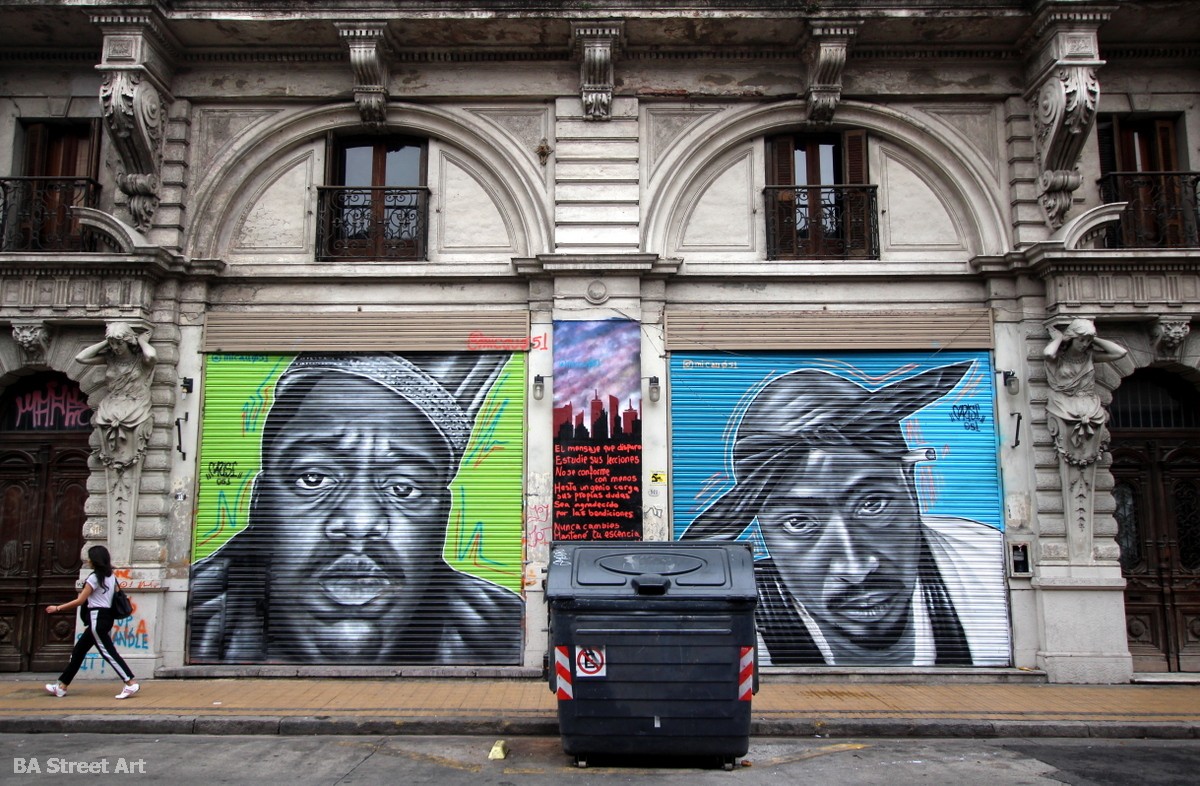 Mario who is from Lima, Peru, first came to Buenos Aires in 2007 before settling in San Telmo where he spends much of his time in between travelling to other countries to work and paint. He has created murals for sports brands in Argentina including Nike, Adidas and Stock Center as well as decorating numerous bars and restaurants in Palermo and San Telmo. 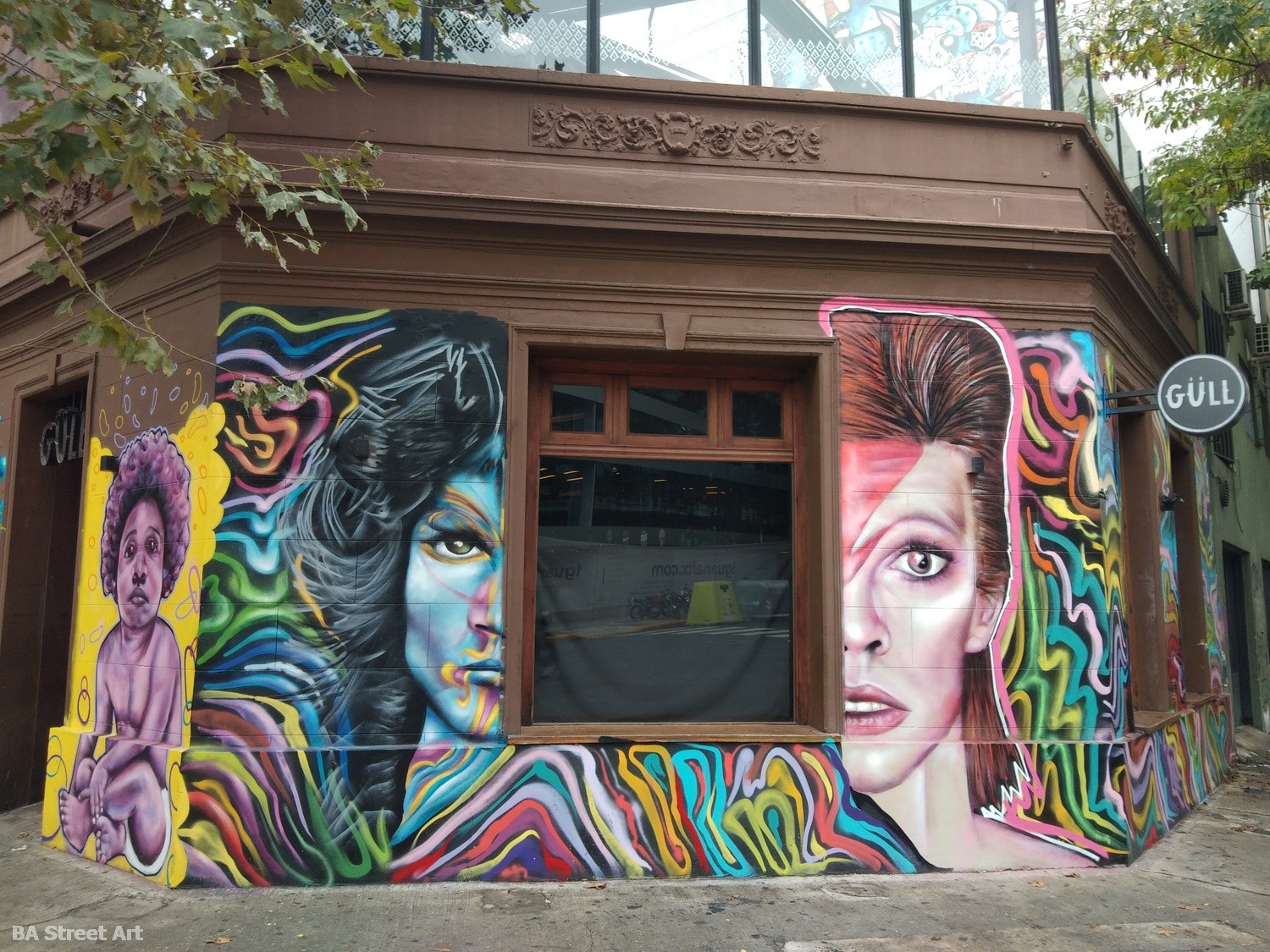 Some of his most eye-catching artworks featuring rap legends such as Biggie, 2pac, Eazy-E and Snoop Dogg on the shutters of local stores in San Telmo and these portraits have become a huge hit with tourists who stop to take photos and selfies in front of them. 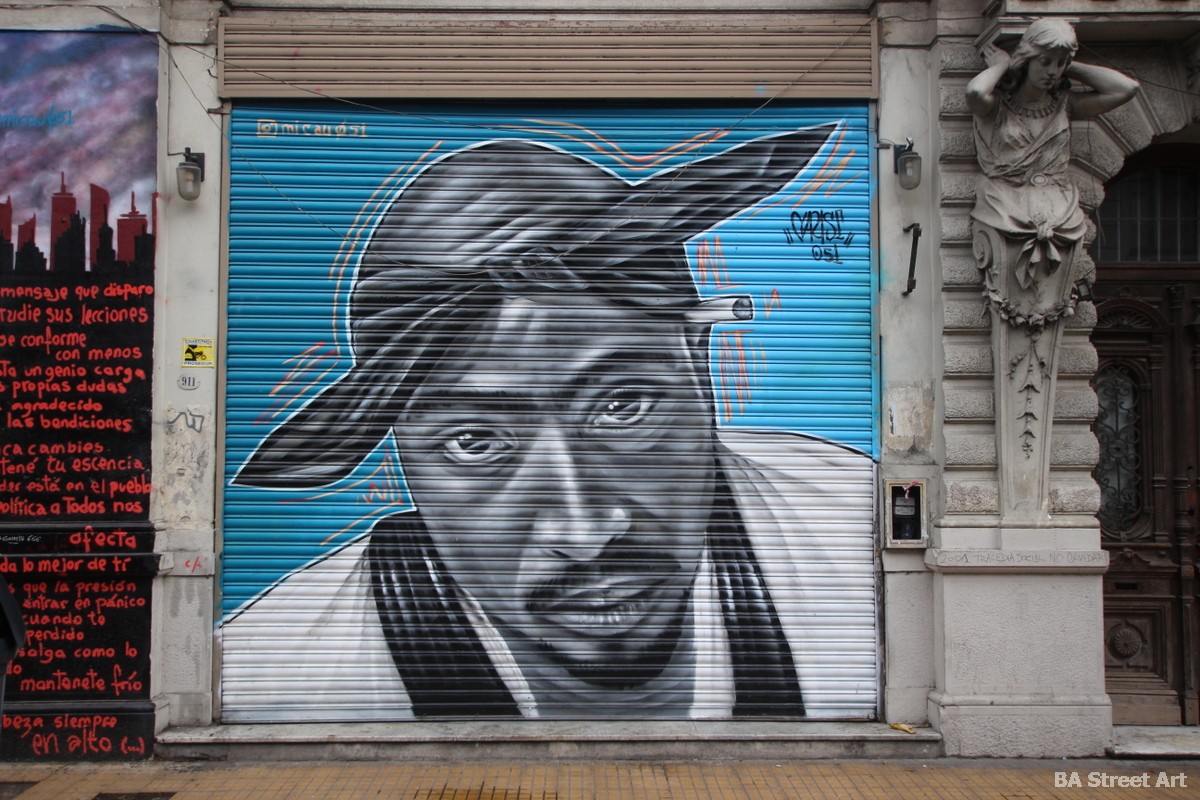 2pac known as Tupac Shakur grew up in Harlem, N.Y.C., and is considered by many to be one of the greatest hip hop artists of all time. He was murdered in a drive-by shooting in Los Angeles on September 13th, 1996 aged 25. “For me 2pac is the greatest of all time,” says Mario. “The aggression of his flow, fury and power of his voice, the anger. When I was a kid, I translated the lyrics of his songs. Later on I also became conscious of the political and social work that he did and it left a big impression on me. He fired messages with content and in difficult moments in my life he was there talking to me in my ear.” 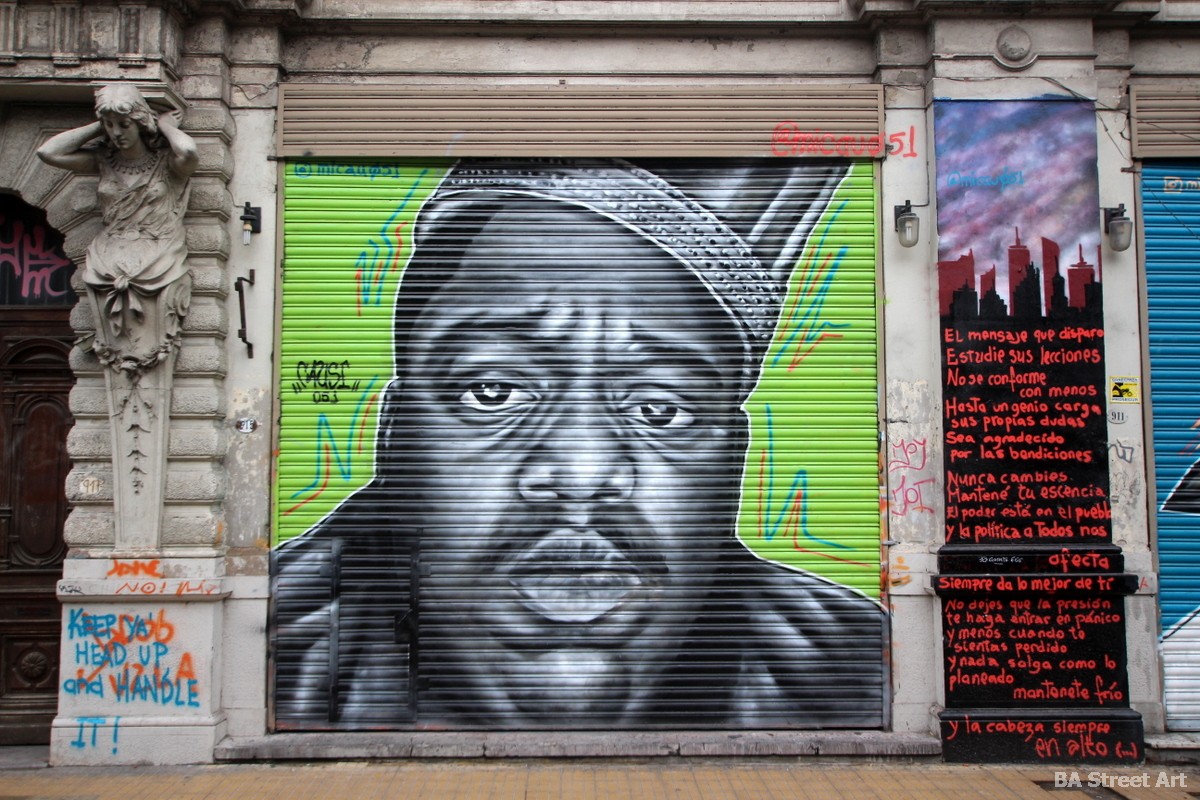 Biggie Smalls from Brooklyn, New York, is considered by many to be one of the best ever rap artists. He was also murdered in a drive-by shooting in Los Angeles on March 9th, 1997 aged 24. “For me Biggie is one of the biggest representatives of the culture (of hip hop). He has a flow and is incredibly versatile. I painted him because I had already painted 2pac and I like opposites.” 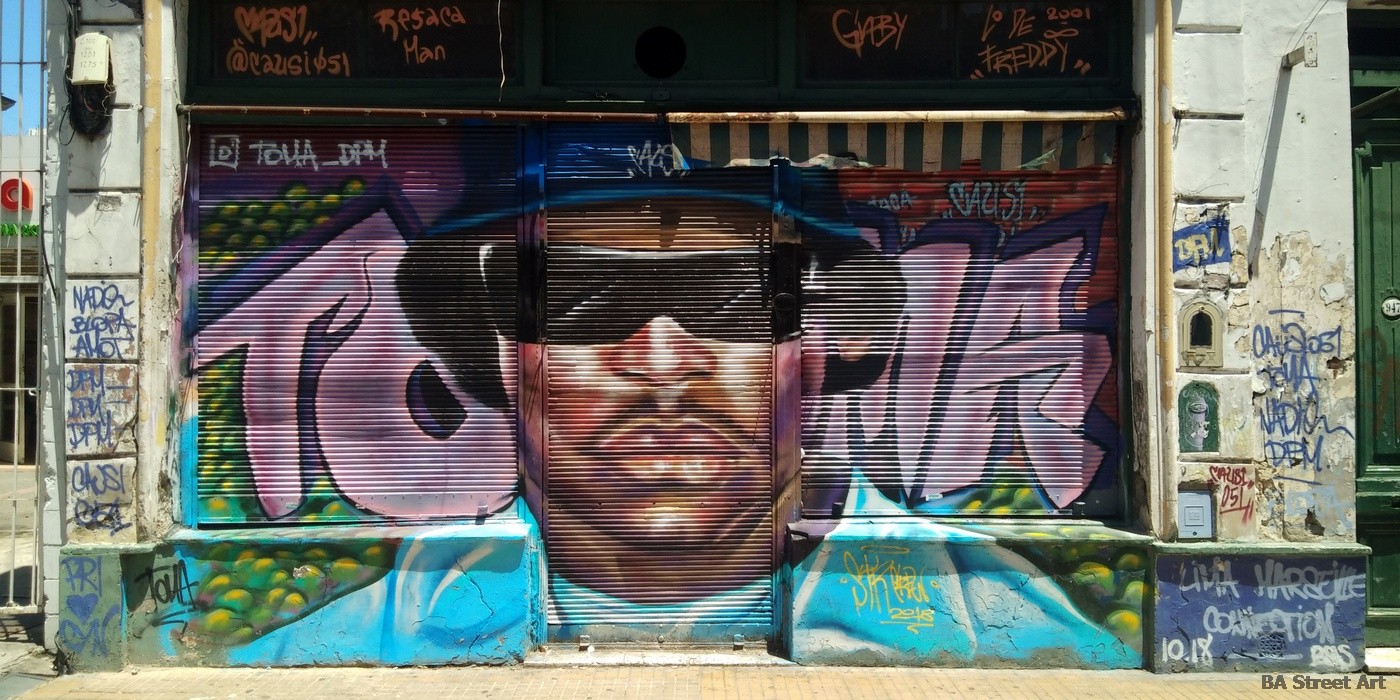 Eazy-E known as the ‘Godfather of Gangsta Rap’ became famous as part of the U.S. 80s hip hop group N.W.A. He died in hospital on March 26th, 1995 after being diagnosed with AIDS. He was 30-years-old. Mario said: “Eazy-E is another hip hop legend. Since N.W.A. formed I liked him because of his simple phrase of saying ‘Fuck the Police’.”

Mario grew up in the working class neighbourhood of Santa Beatriz in Lima. “It was a neighbourhood known in the 70s for its poets, also for drunks, fights, teenage gangs, prostitutes and transvestites, and good and hard working people,” he recalls. Mario says he first starting painted tags and throw ups in the street aged 14 or 15. He then gave up graffiti for many years before picking up a spray can again. “I grew up with hip hop culture all around me. It was the 90s and it was a big influence on my generation.  The hip hop culture in Lima was strong and the rage and the harshness of the music of rap together with graffiti were ever present.” 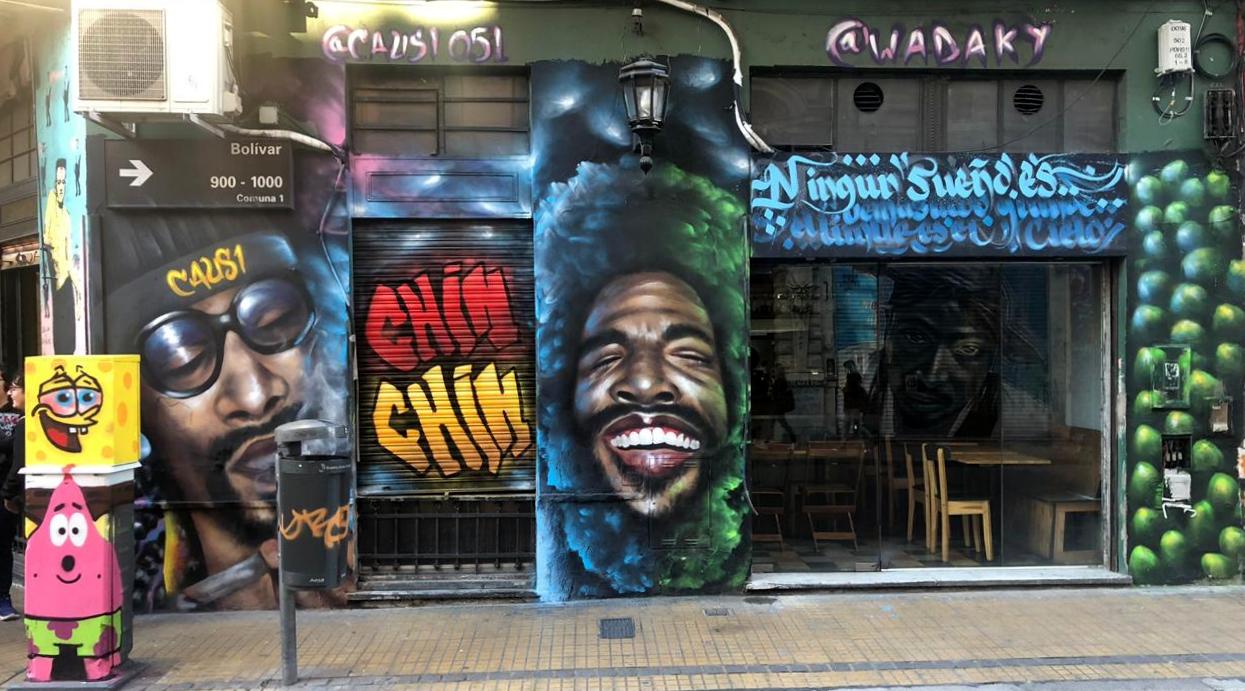 Gangster-rapper Snoop Dogg is another hip hop legend that Mario has painted together with a portrait of Questlove. Snoop Dog he describes as “a dinosaur of culture.” 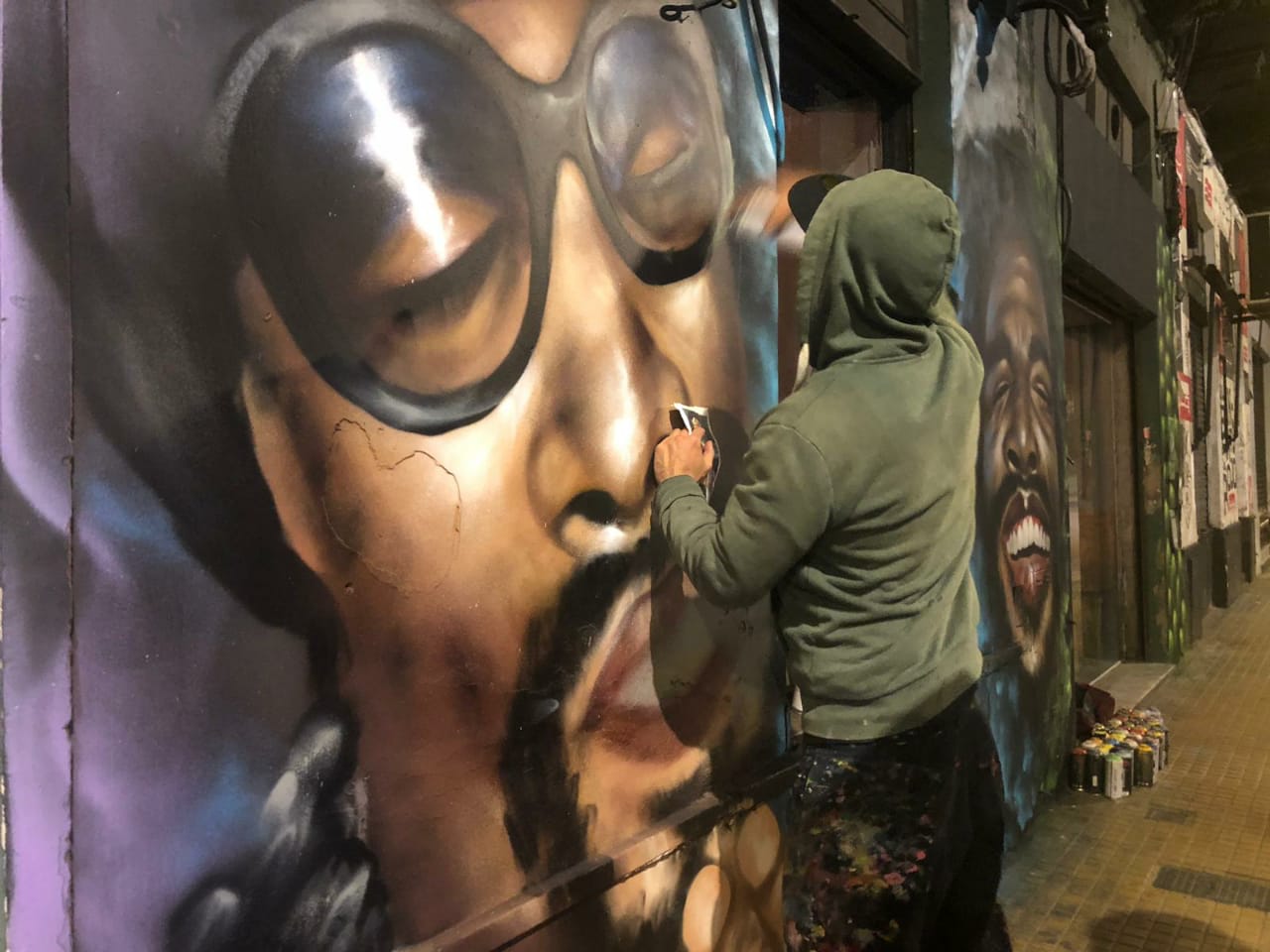 So why paint all these hip hop legends? “I see them (2pac, Biggie, Eazy-E and Snoop Dogg) as guys with courage,” revealed Mario. “Each one in his own context suffering abuses from a state that has been absent for minority groups along with the police brutality and the racial segregation. Before this the MCs had a lot to say, they are also political guys and I respect them a lot.” 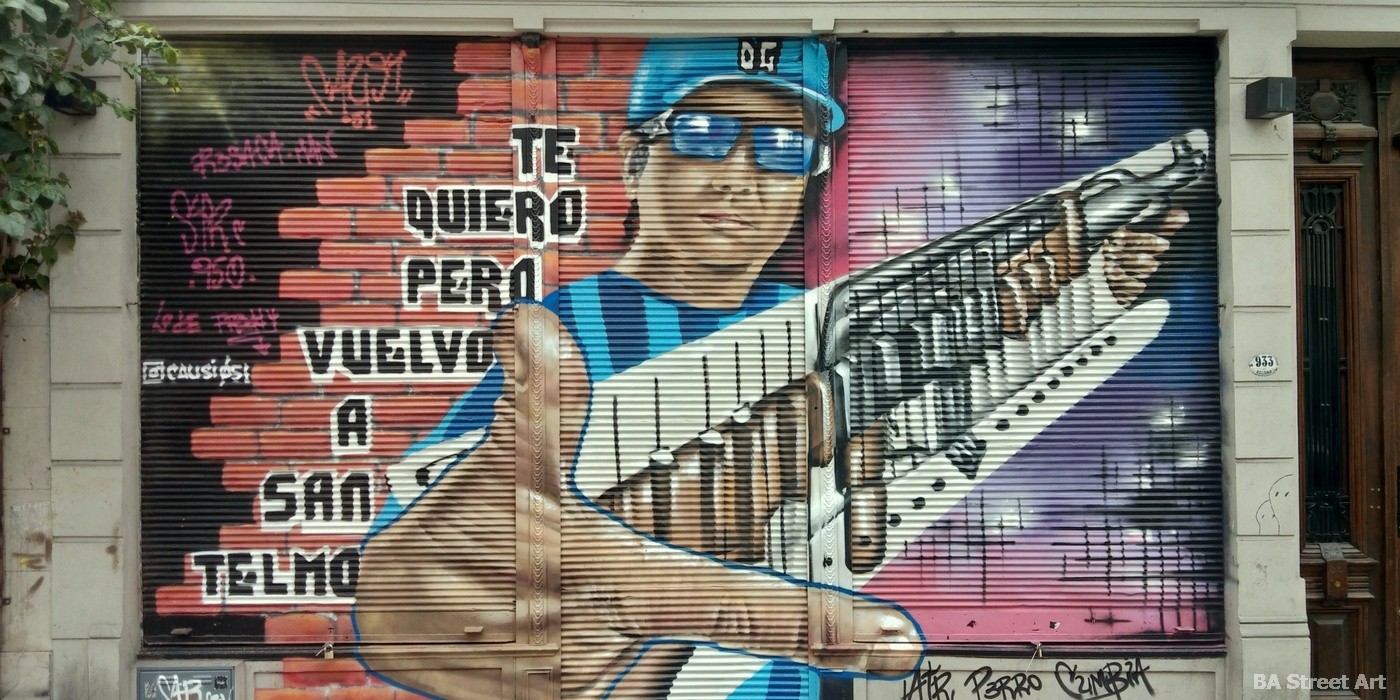 Along the same street as the rap portraits, Mario, with help from his friend Lucas Desimone, has also painted a mural dedicated to Argentine singer and keyboard player Pablo Lescano from Cumbia ‘villera’ group Damas Gratis. “I like cumbia but I’m not a huge fan,” revealed Mario. “I admire Lescano though and I like even more what he represents. He’s a guy who worked his way up from the bottom. For this reason I painted him and his classic keyboard with the AK47! The portrait of Lescano includes the phrase “Te quiero pero vuelvo a San Telmo.” (“I love you but I’m returning to San Telmo.”) 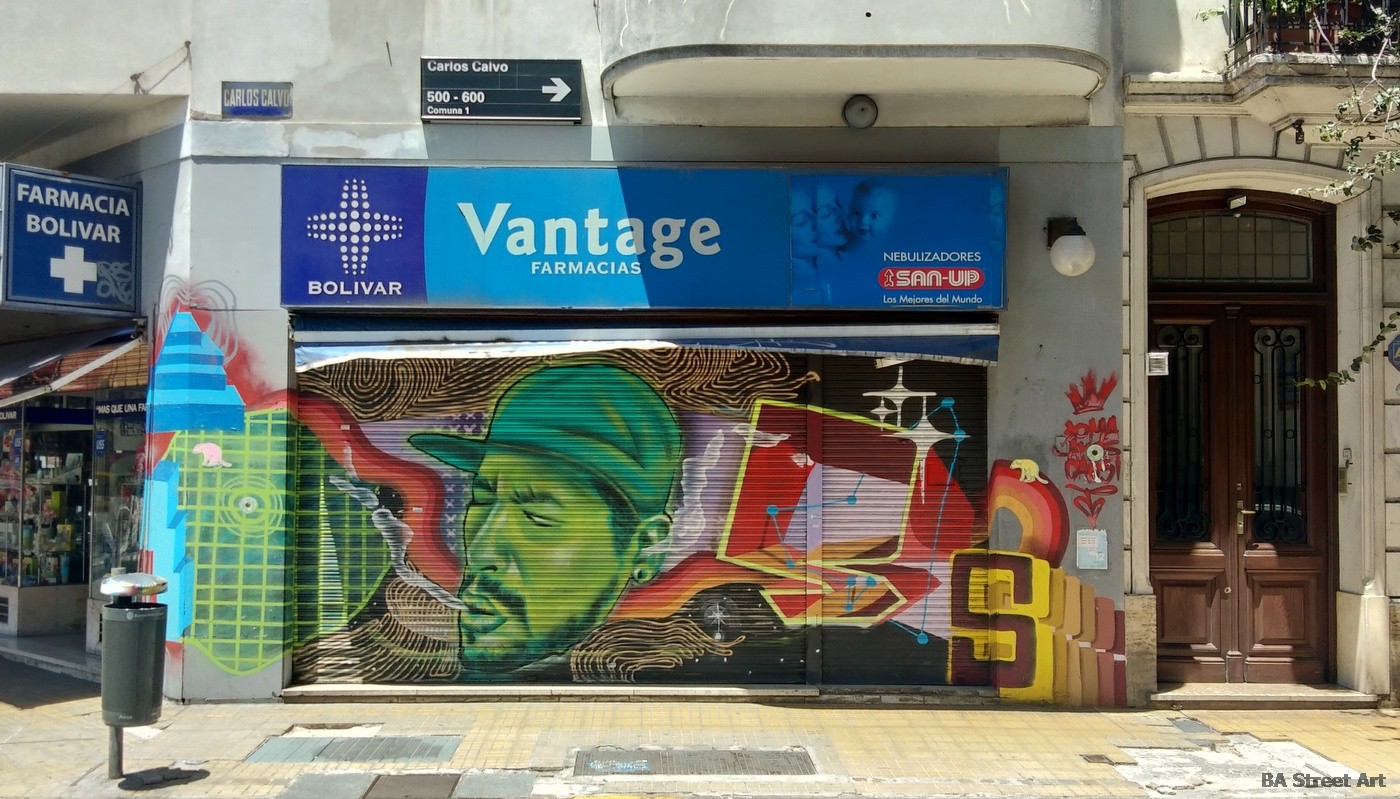 Mario reckons he has painted around 14 murals in San Telmo. “San Telmo is a neighbourhood in which I have alway returned to when I come back to Buenos Aires and the artworks I have painted are a small show of my affection for this place,” he said. “I have shared a lot of great moments including painting with my graffiti brothers who I love and admire Roma, Ares One and Wadaky.” 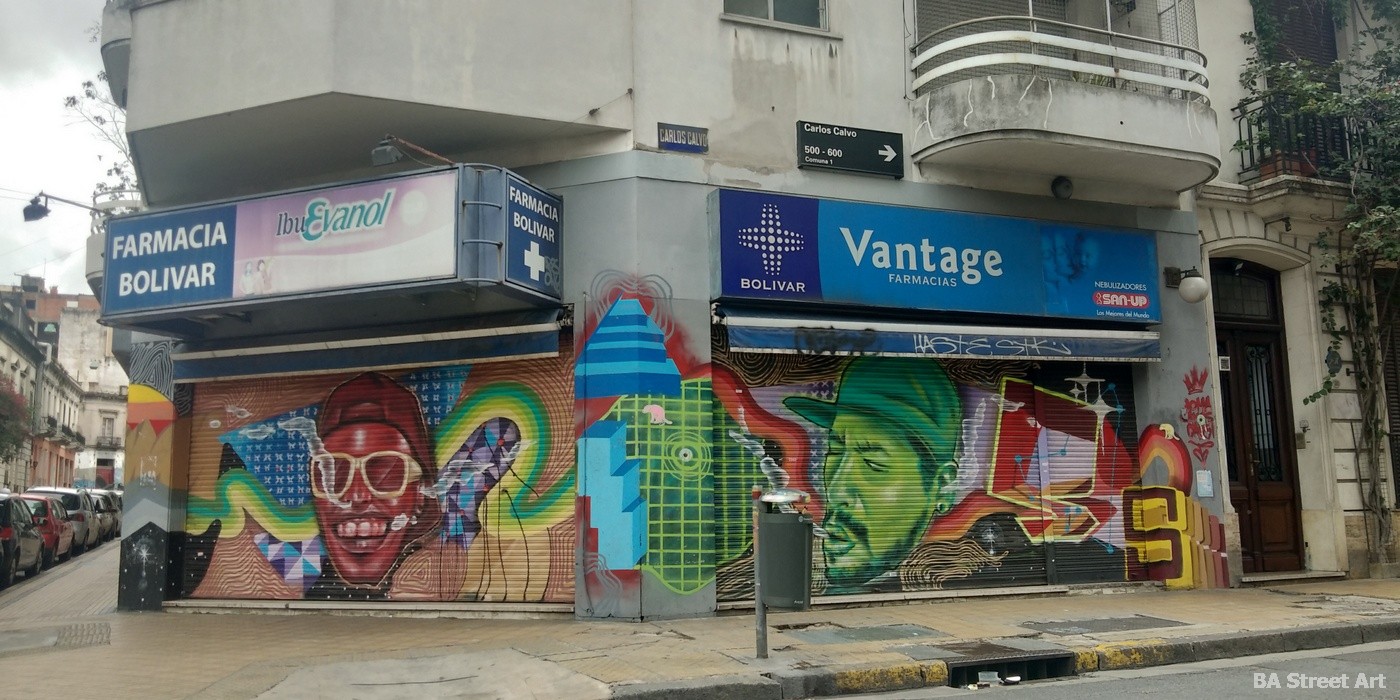 His collaboration with Argentine artists Ares and Roma spans 25 metres across the shutters of a pharmacy and can be found on the corner of Bolivar and Carlos Calvo. 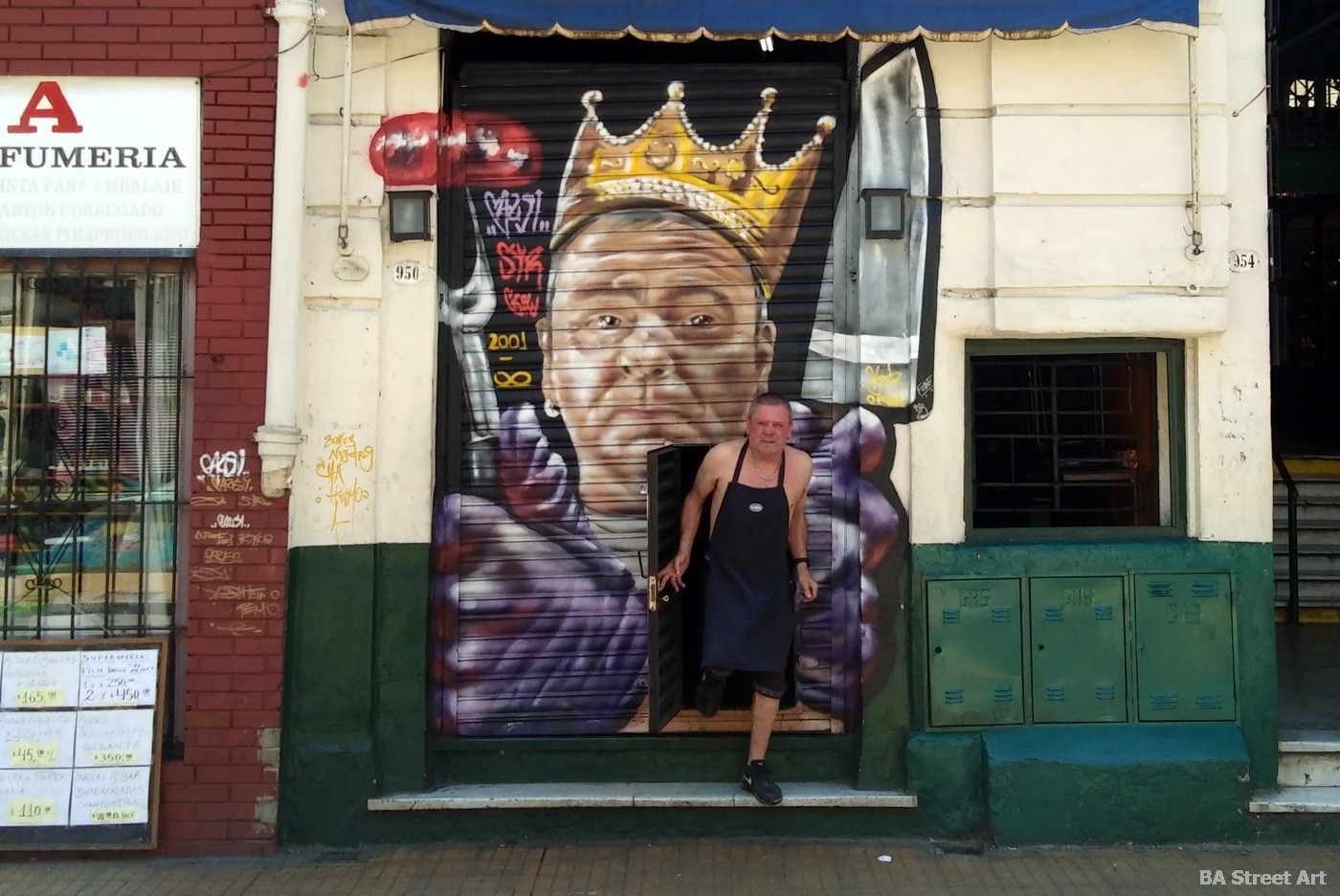 Another recent mural by Mario along Bolivar Street features local legend Freddy Desimone nicknamed ‘Choriman’ after the word ‘choripan’ meaning sausage in Argentine Spanish. Mario  explained: “He’s the owner of a classic Argentine restaurant in San Telmo Market. He’s a great guy who I really appreciate what he does. I wouldn’t have been able to paint this one if it wasn’t for the help of my ‘brother’ Lucas Desimone. Besides, it (‘the choripan’) is  something typically Argentine.” 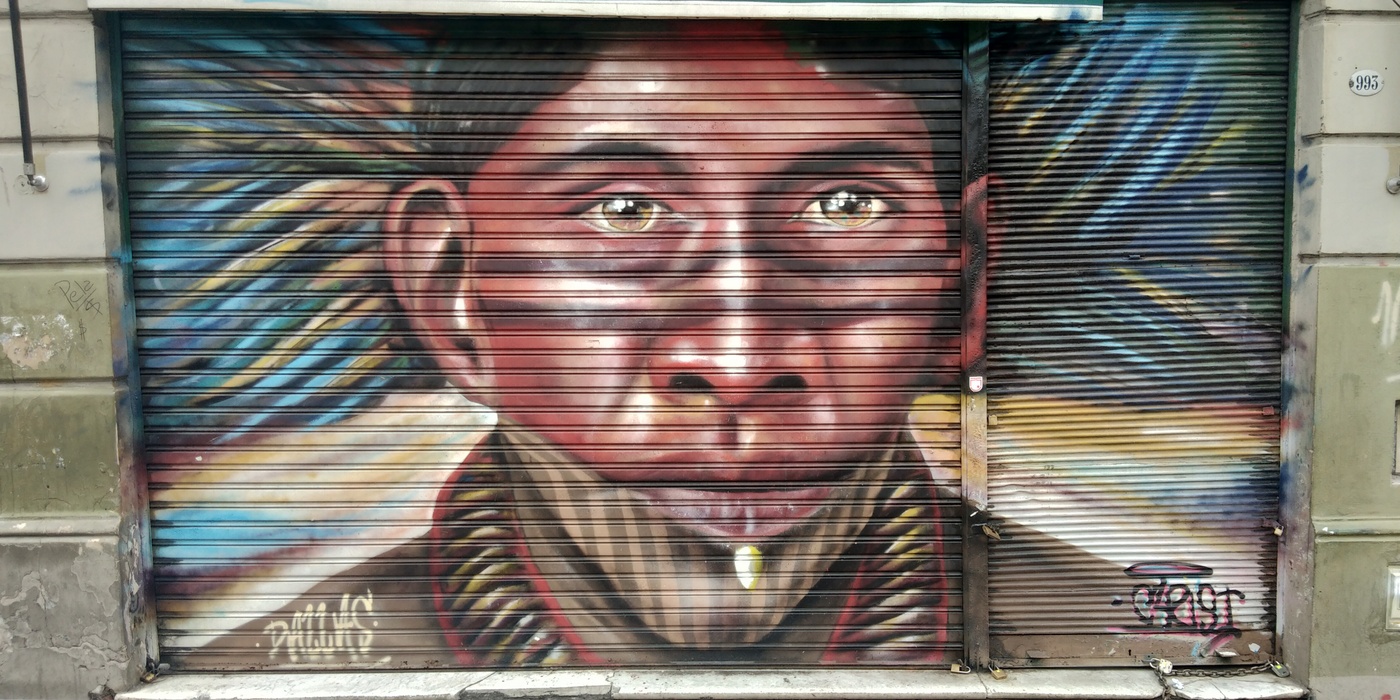 Another artwork that Mario painted along Bolivar Street features a portrait of an indigenous tribesman on the shutters of a local store. It relates to an Amazonian tribe that has been displaced from its home and the jungle due to deforestation. 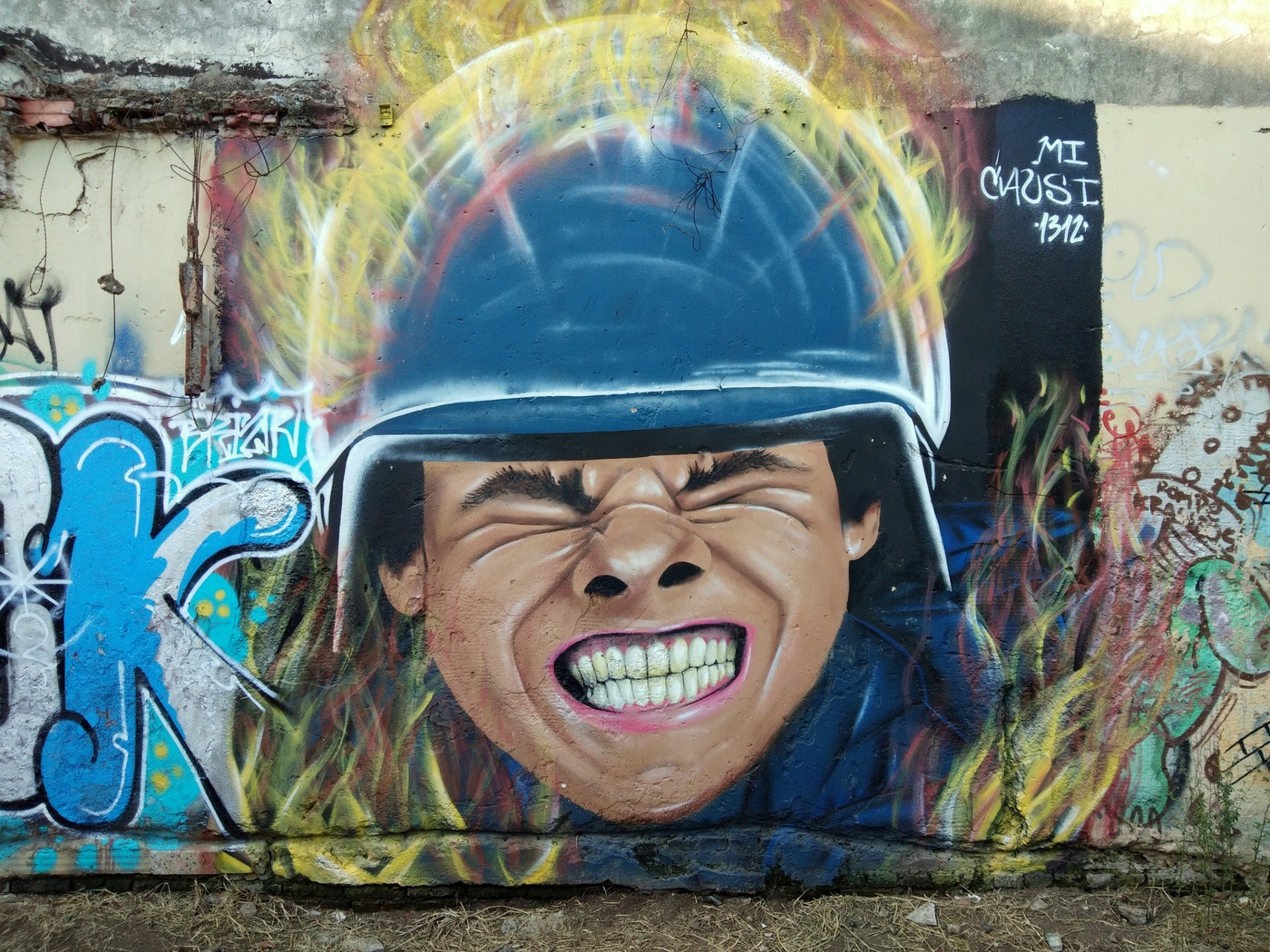 Mario is busy producing a series of paintings for his first solo gallery show in June 2019 at the Pabellón de las Bellas Artes at UCA in Puerto Madero, Buenos Aires. The show features paintings on canvas and artworks produced with oils and acrylics as well as spray. “What I develop in my workshop is very different to what I paint in the street,” explains Mario. “I try to work on how we view the human condition and the anxiety of the human condition, always trying to give a meaning to it so that it says something. If you look for a second (at a work of art) and you walk away with an idea buzzing around in your head – that’s mission accomplished! Forming a conversation, the reference to an aesthetic or a  style… I am still searching.” 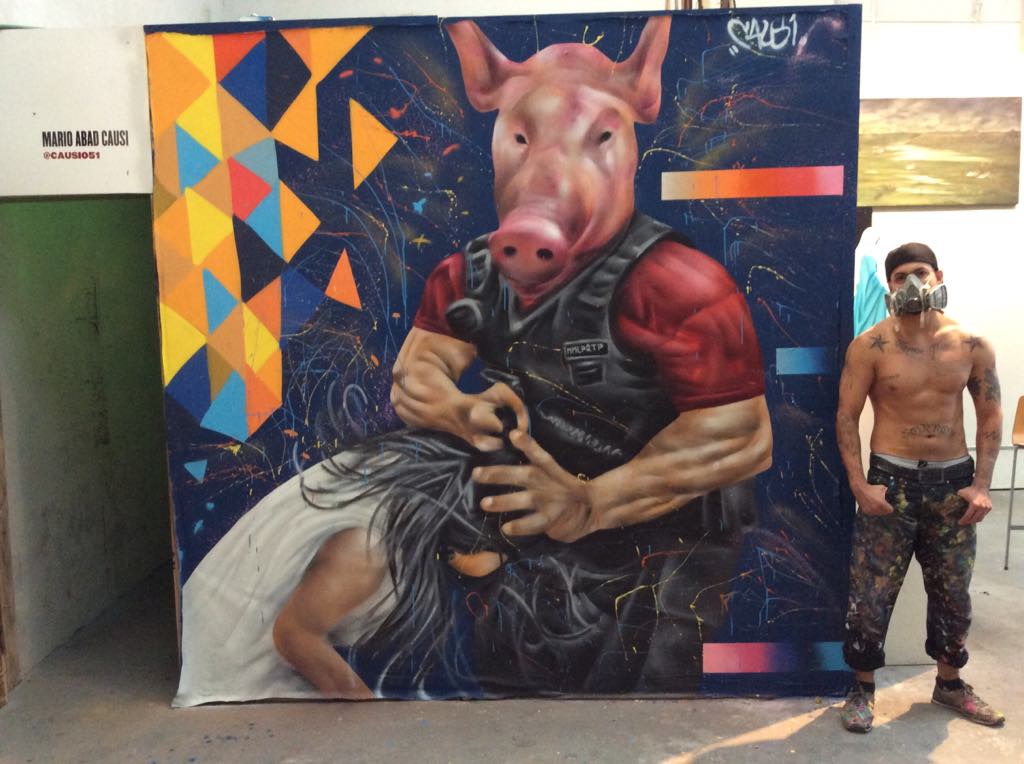 Mario Abad with a painting for his show relating to police brutality (photo: © Causi 051)

The theme for the artworks included in his show, Mario says is about “marginality, police brutality, gender violence, rage, madness and the human condition. Real and crude things, fear of life and death, a dose of reality. Also personal things (and people) who had an impact on me since I was young like (the German-North American poet and writer) Charles Bukowski.” 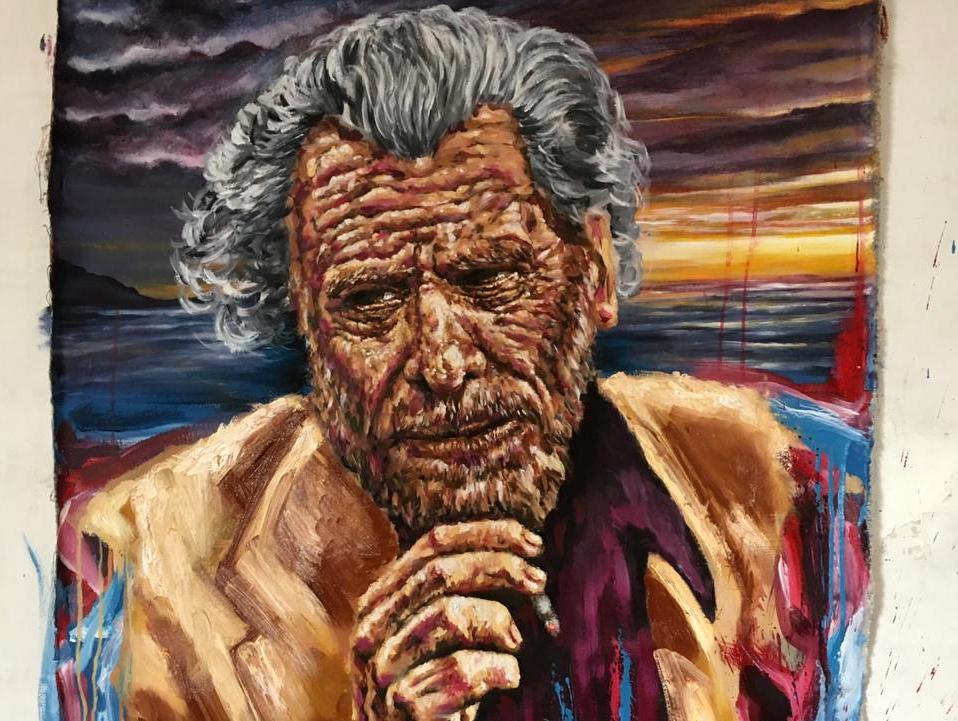 Mario also has plans to travel to Europe and Mexico to paint. “I’ve been thinking about it for a while and hopefully working on more projects here in Buenos Aires I’ll be able to make it happen.”