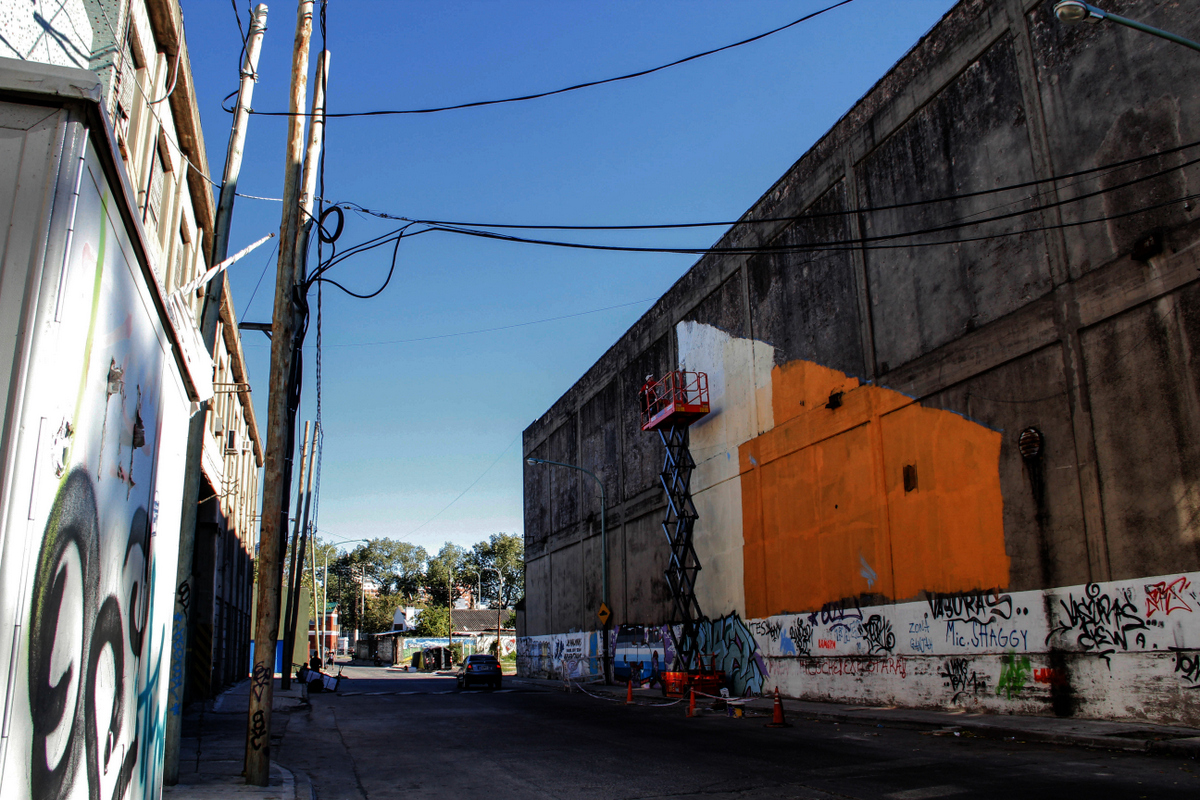 The artwork measuring 700m2 was organised and curated by Buenos Aires Street Art and took 18 days for the two street artists to complete. The amazing mural has already helped transform the area and bring a smile to many people who live and work in the zone of Saldias. Many thanks to the project sponsors Alba Pinturas, Kuwait Aerosol Urbano and Maquinarias Pyramiz for their fantastic support. 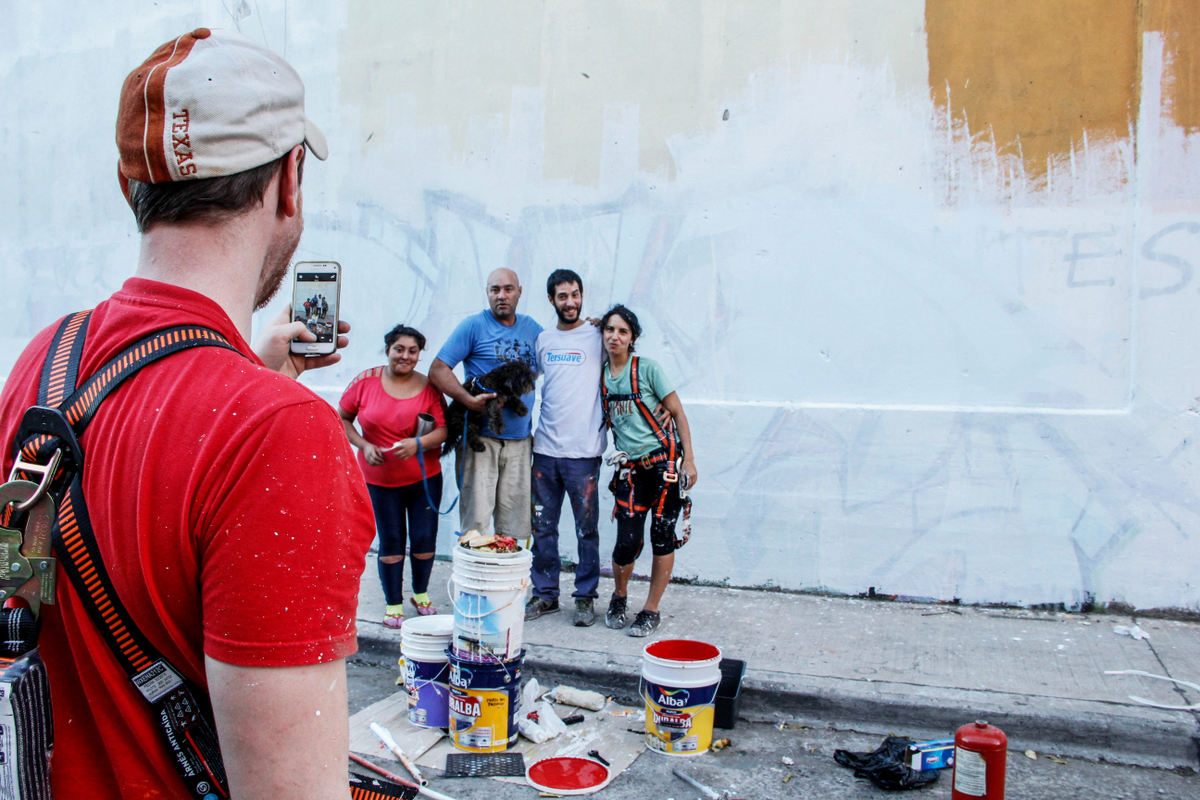 The mural on the facade of a warehouse building in Saldias is located close to Villa 31 and a couple of blocks from Shopping Alcorta. 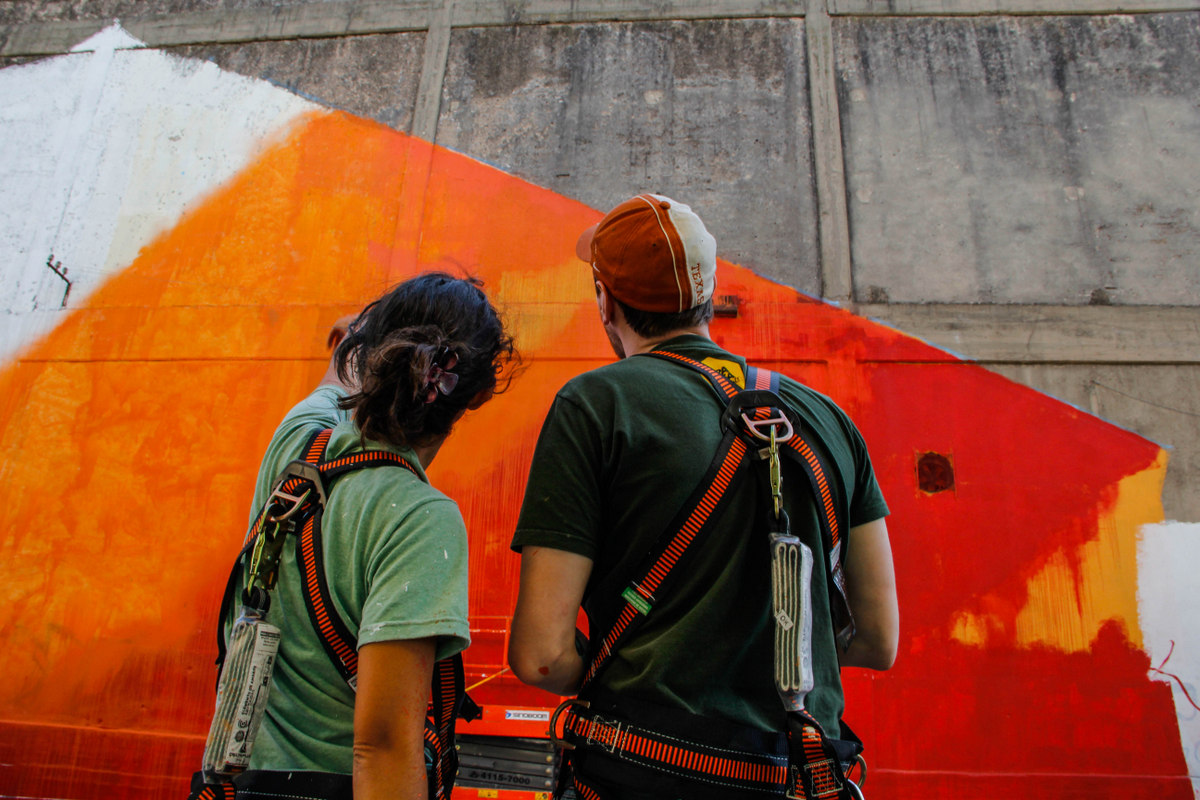 Spear, 29, from Brussels, specialises in painting portraits of common people and teamed up with Leticia Bonetti to create the giant mural in front of Polo Cultural Saldias that was completed during the event Art&Swap. 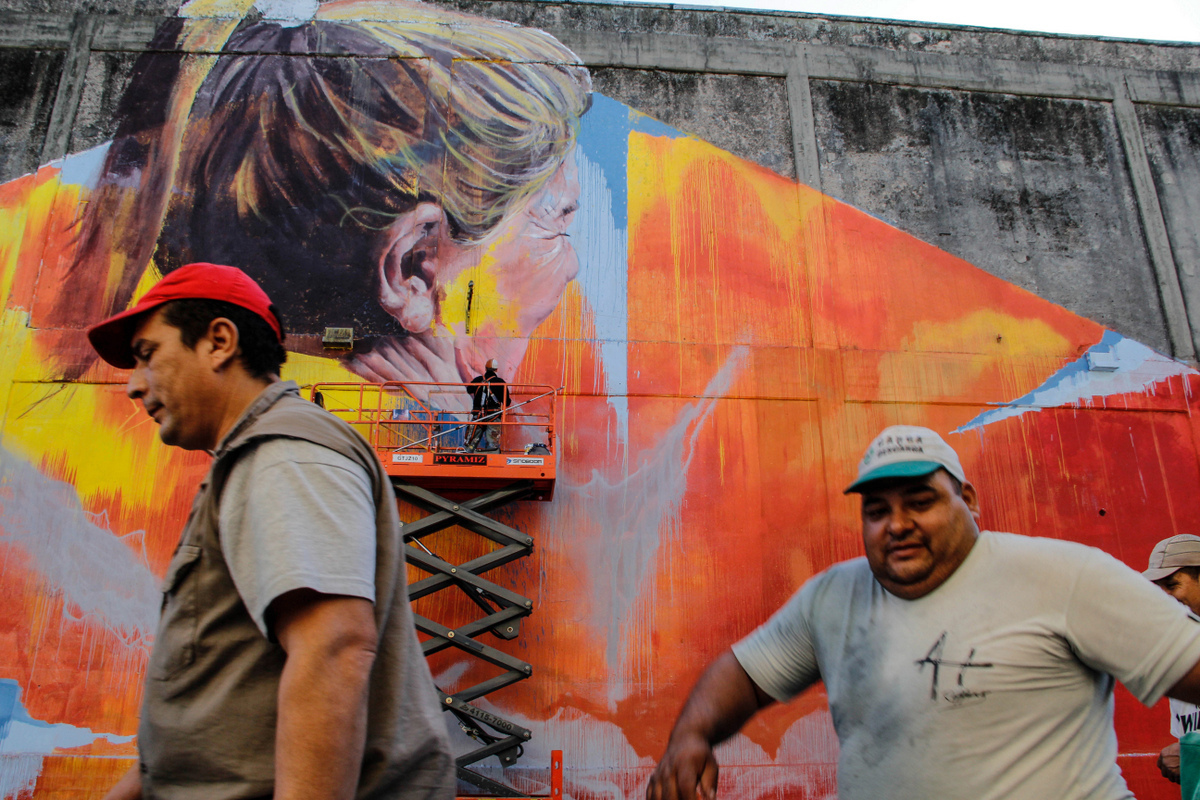 It was environmental lawyer Marianne Martinez Riekes, wife of Buenos Aires Street Art founder Matt Fox-Tucker, who came up with the idea to paint a mural with a theme relating to recycling and include Ana Maria Martinez as the principal figure. 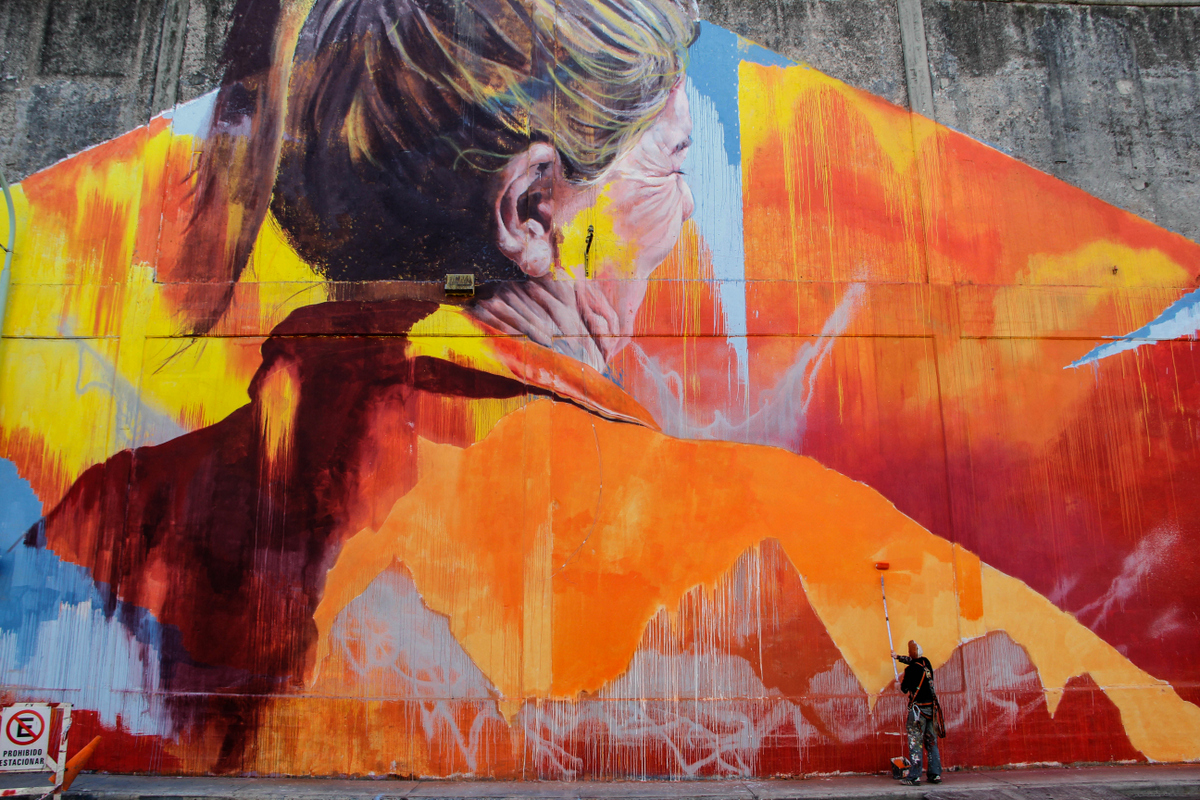 El Ceibo plays an important role in separating recyclable materials into plastic, paper, cardboard, glass and aluminium so that it can be sold on or reused to create objects such as sculptures, furniture or toys. “What is important is that we need to care more for water, land and nature and trying to improve our quality of life,” said Ana Maria. “Every day we need to think about not throwing away any bottle or can or any material as the earth cannot continue supporting the amount of waste that we produce.” 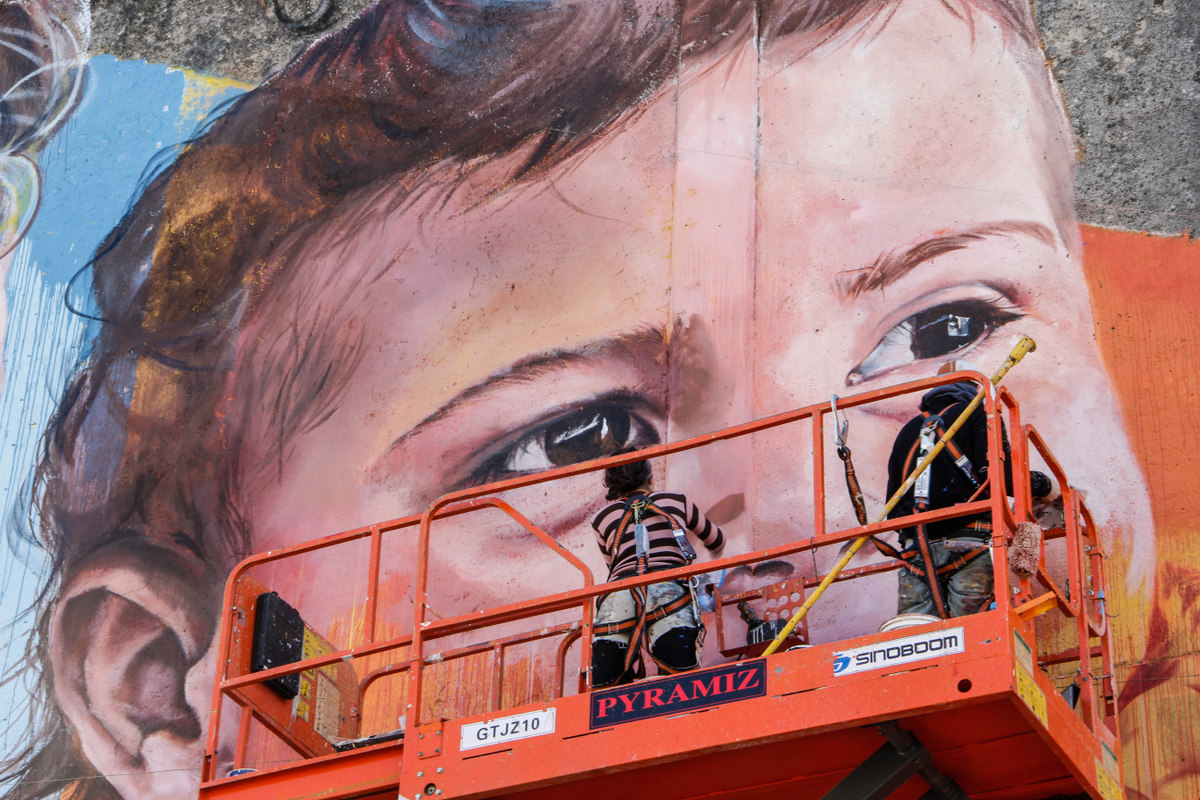 Also in the composition, Spear himself chose to include a portrait of two-year-old girl Zoe Maluzan, who is the daughter and grand daughter of two workers from the nearby Deposito Saldias. Spear said: “For me, the idea of painting portraits in the street is to show more humanity and share emotions and expressions with people who see them and to make the street a happier place,” said Spear. “With this mural we wanted to have a social message first of all about the importance of the family and to also create a mural inside the social tissue of the neighbourhood that’s why the people we painted are from here.” 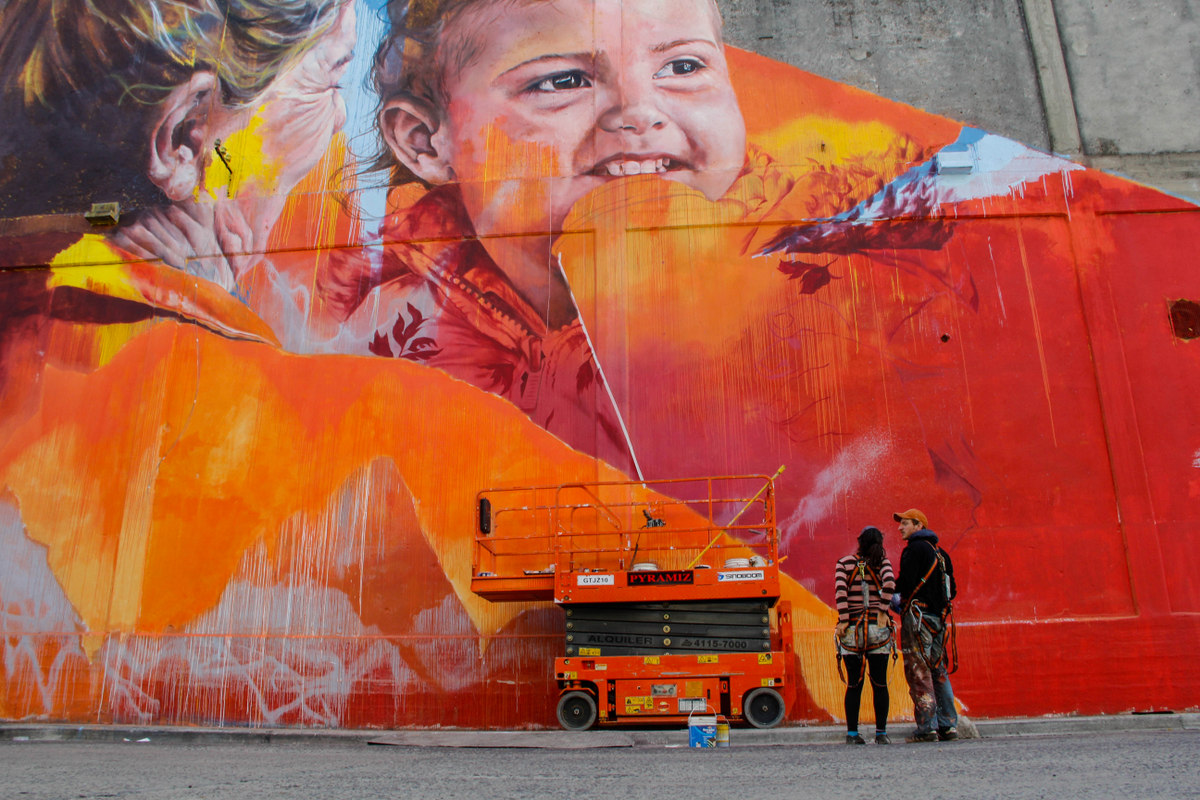 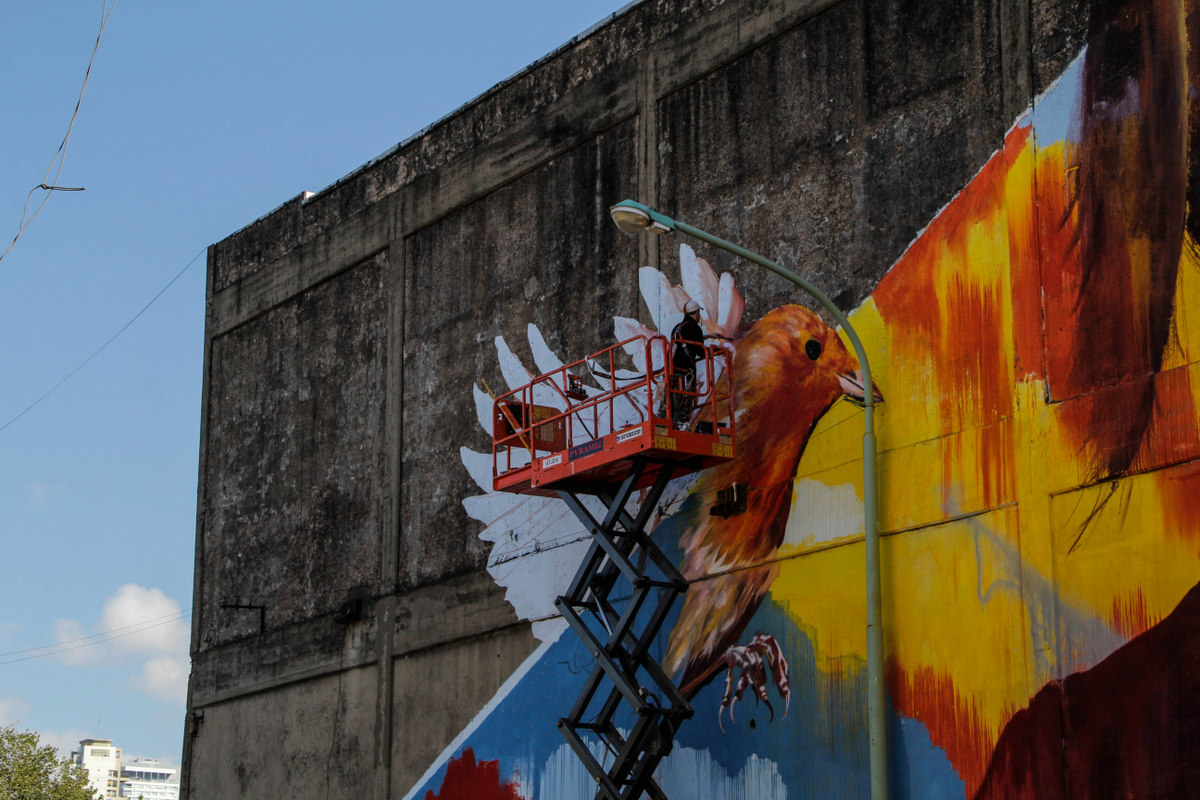 Spear also included in the mural and a Rouge Gorge – a bird similar to a robin that is native to Belgium and symbolises the cultural exchange between Belgium and Argentina. Buenos Aires Street Art invited Spear to Argentina especially for this project and also negotiated with the sponsors Alba Pinturas, Kuwait Aerosol Urbano and Maquinarias Pyramiz to provide the latex paint, aerosols and crane that made this mega mural possible. Buenos Aires Street Art also paid for the artist’s flights and all the materials and costs necessary to complete the artwork. 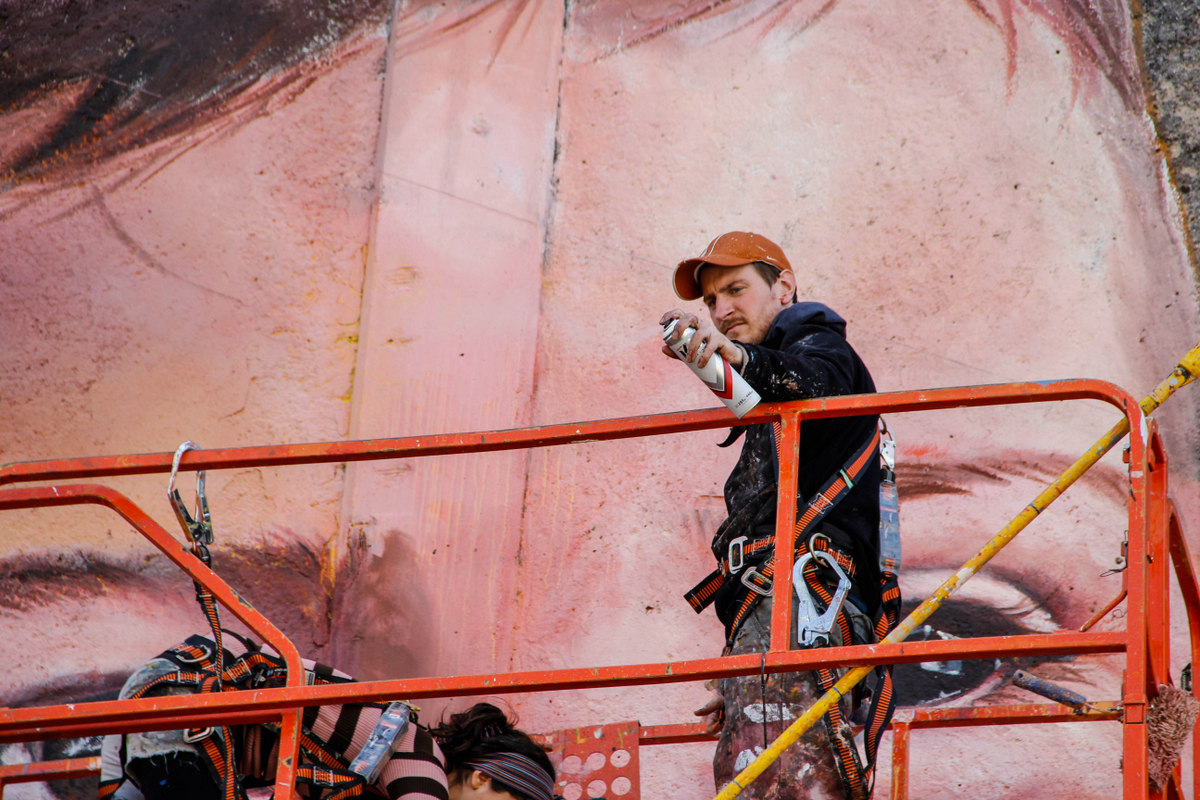 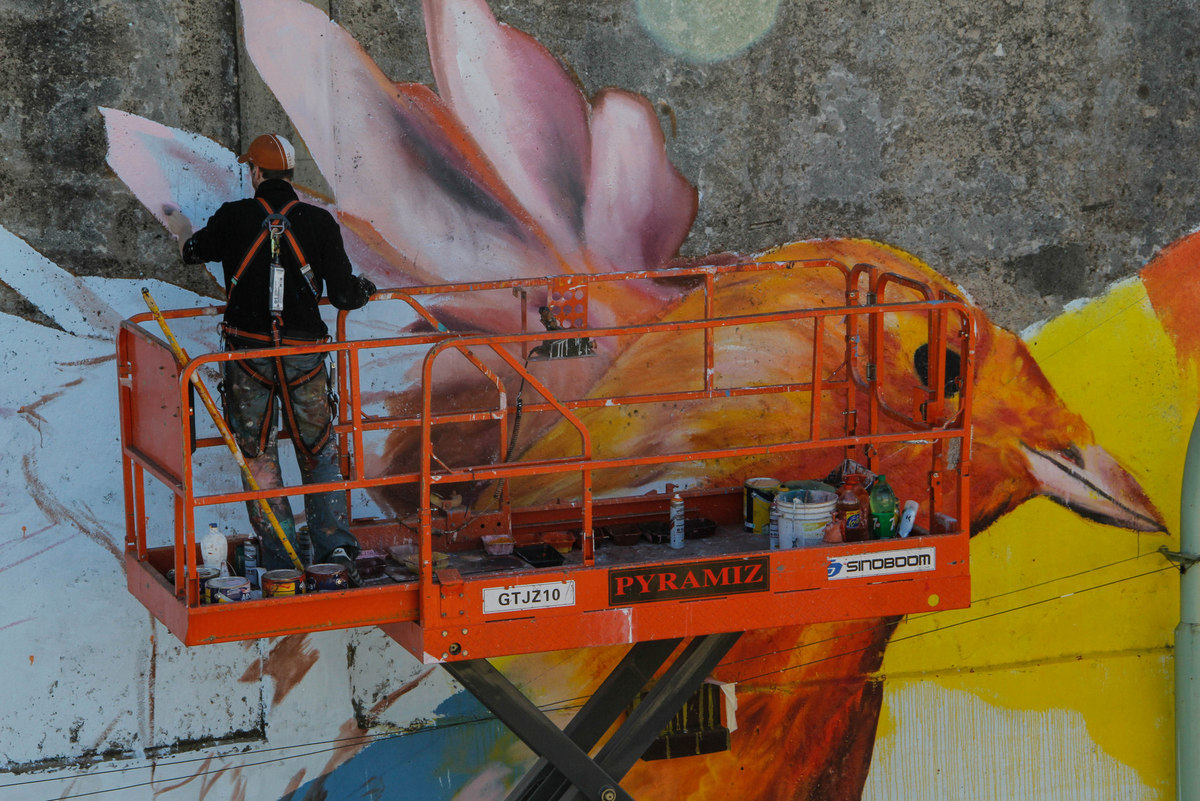 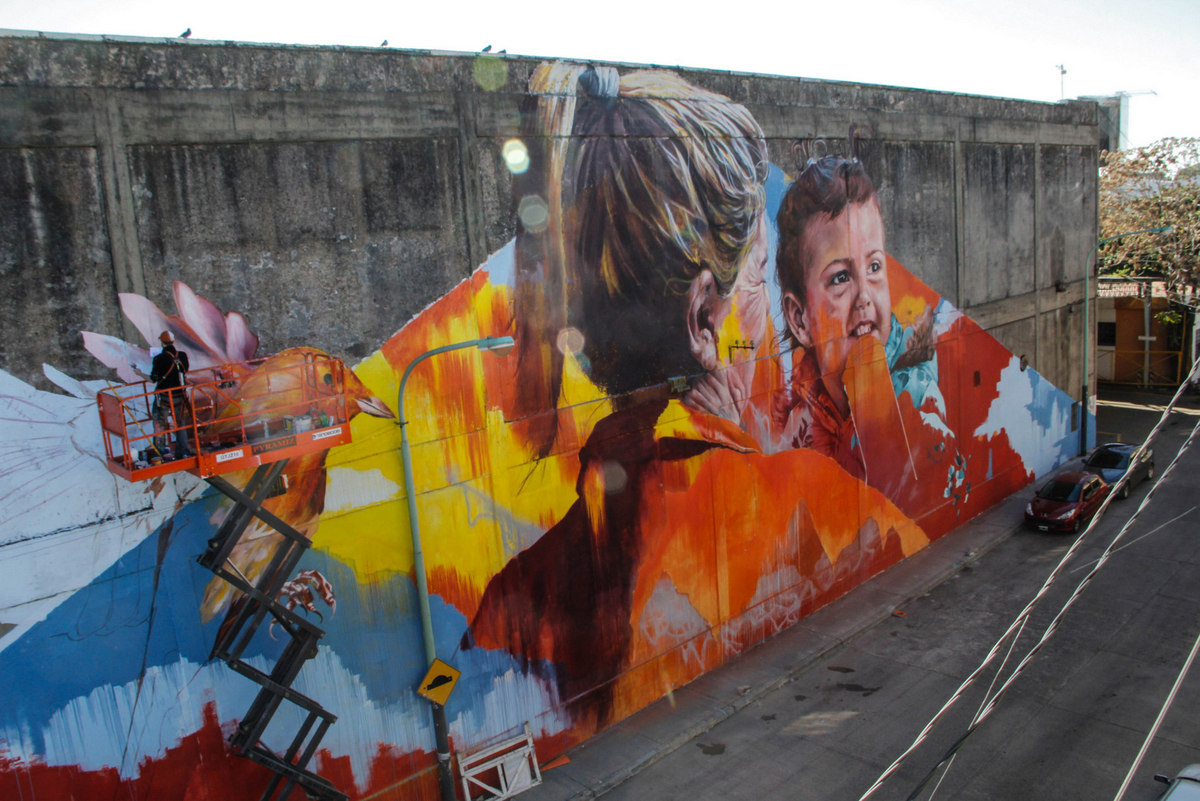 Matt Fox-Tucker of Buenos Aires Street Art said: “The idea was not only to invite a top Belgian street artist to Buenos Aires to paint a huge mural but also for the artwork to also have a social impact, in this case talking about the importance of separating recyclable materials and also paying tribute to a positive role model like Ana Maria who helps care for our planet and future generations.” 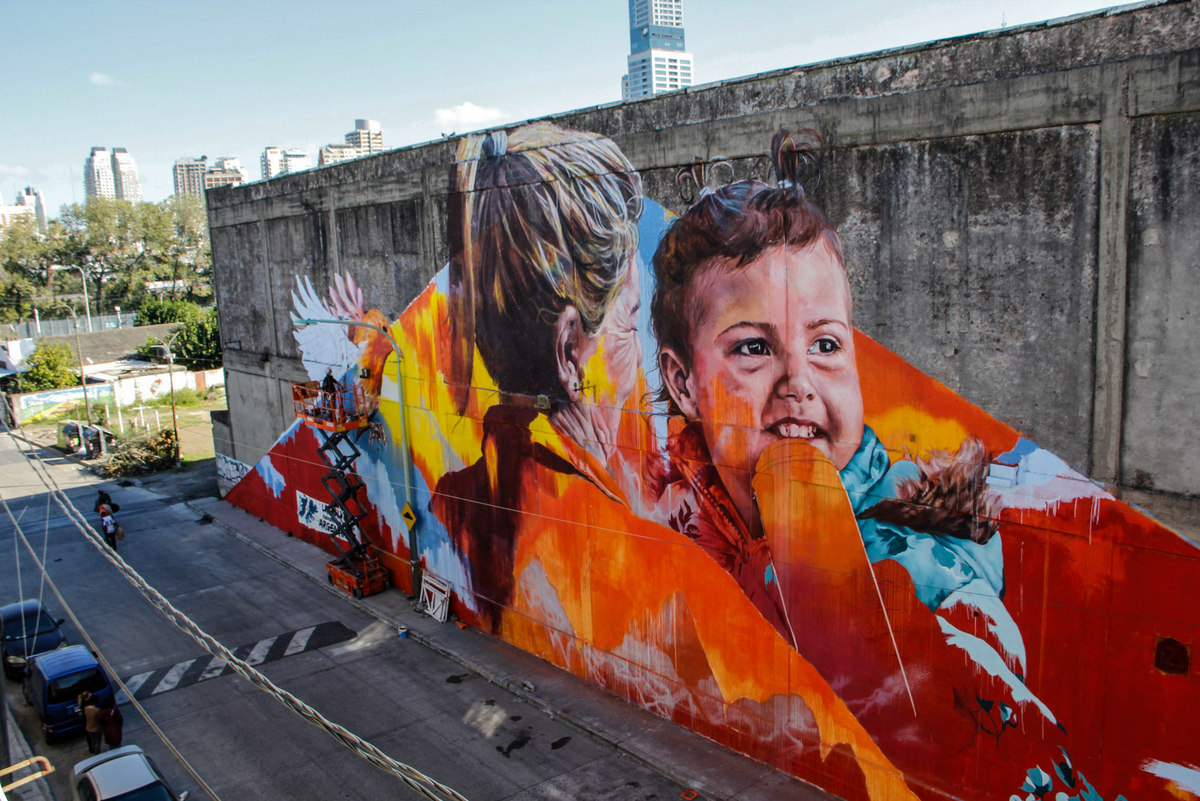 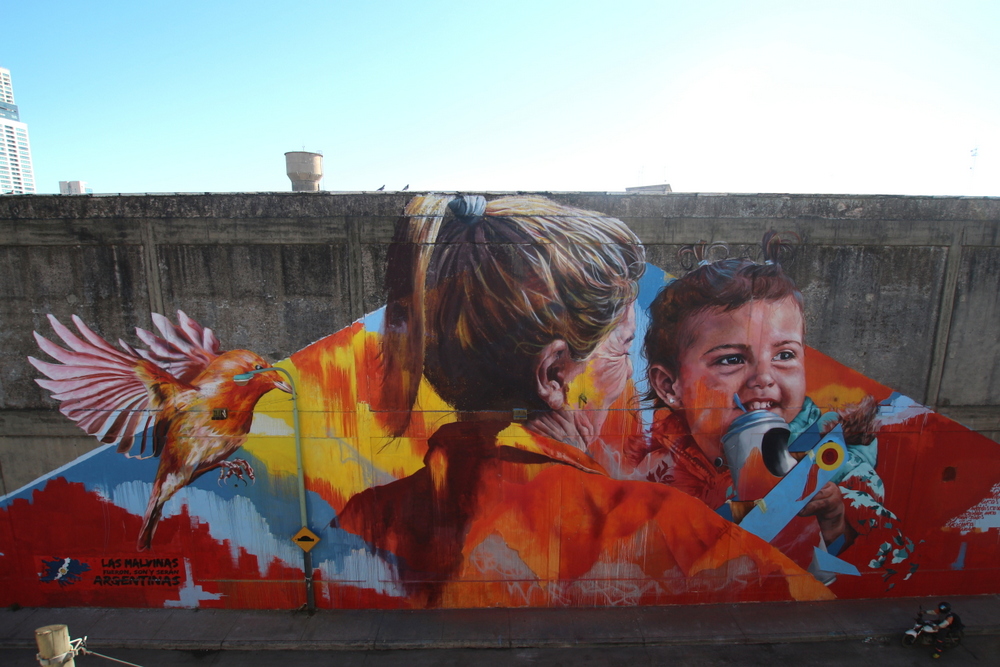