Luxor is the best-known street artist in La Plata, Buenos Aires, and in the last five years he has painted more than 400 murals around the city. His striking and colourful artworks contain influences from Latin American aboriginal traditions, symbolism and popular culture. Luxor has his first solo show in the city of Buenos Aires that opened last week at BA Vault Gallery in Palermo, Buenos Aires. The title of the show is “FIRE: Action must not be a reaction without a creation”. Luxor spoke with BA Street Art about the exhibition and how his art expresses man’s freedom, desire to fight and create a better world. “What I try to do in my murals is convince people to enter my world so that in a way my paintings are big billboards proposing a new world,” enthuses Luxor. Lucas Esteban Artola is his real name but he paints under the pseudonym Luxor. After studying set design at the School of Fine Arts at the University of La Plata in Buenos Aires and attending traditional painting classes, Luxor started to make his first artistic interventions in the street in 2010 with a group of artists called ‘Sien Volando’. The group later separated and he began to paint alone. Luxor organised the international street art festival ‘Haciendo Zig Zag’ in La Plata in 2012 with fellow artist Rodrigo Acra as well as projects to paint schools and a community library. Other graffiti and street art events he has arranged include ‘Intervención Magenta’, Proyecto Kalle’, ‘Concretos Museos de la Calle’ and ‘Volver a Habitar’. Luxor believes street art can have a positive effect on its surroundings, bring people together, regenerate run-down areas and help reduce crime. “First of all it gives you the opportunity to enjoy yourself and achieve a future where young people learn about art and the positive effect it can have on public spaces,” enthuses Luxor. “My philosophy is if there is more culture and art in the street there is going to be more security and less crime.” One aspect of being a street artist that Luxor enjoys the most is the personal contact when painting in public places. “I believe that the street is the best place to paint,” explains Luxor. “There were moments a couple of years ago when I was painting two or three murals a day. I like to be active like the title of the show. I like to talk about what is ‘popular painting’ or painting in public places – ‘popular’ is something that should be accessible to everyone and free.” As well as painting walls, Luxor has painted cars, lorries and caravans and different objects in the street. “I always walk along the street and find things that people have left, a message or a mural – it’s a form of engagement and conversation that I think is really relevant to leave something for someone else,” says Luxor. 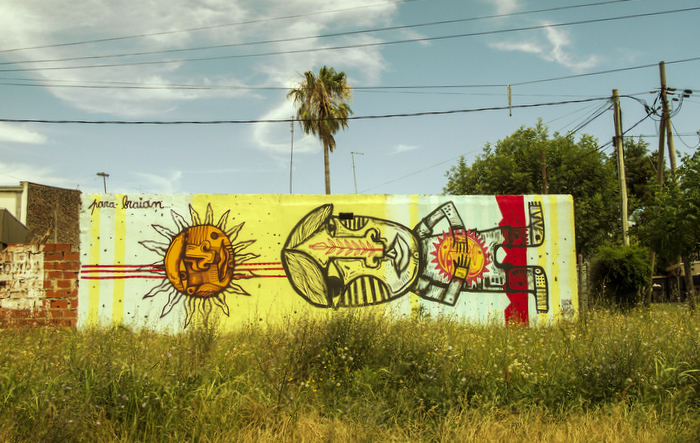 The world of Luxor – what’s it like? “It’s a world with a lot of change, it’s a dynamic world and it’s not static,” he explains. “Sometimes I speak with a friend of mine who says still water dies. When the water stays still it stagnates. If you leave it in a bucket or an old tank it’s the same, it’s dying – so movement is something that I try to have in my artworks.” 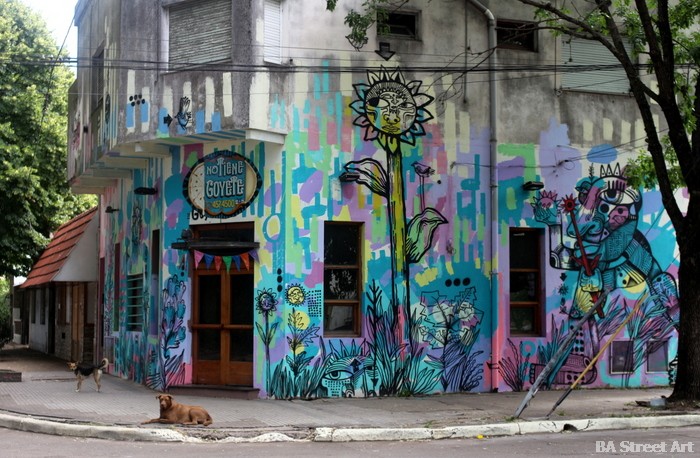 He adds: “It’s a dynamic world, always thinking about the person who is beside you or the environment because the planet’s natural resources are finite. I think about the things that make me happy everyday – simple and popular things like drinking a mate, eating a pie, barbecue, a sausage or a neighbour saying ‘hello’. What is popular is very important in my work and is what nourishes me and why I want to paint.”

In April 2013, devastating floods in La Plata claimed the lives of more than 51 people. A couple of days later Luxor painted 10 murals in different neighbourhoods around the city as a tribute to the victims. One shows a character that Luxor describes as ‘a protector’ lying down and rescuing a house from the water and filling it with positive energy. All around are houses that have been destroyed by the floodwater. Protection – Luxor in front of his mural in La Plata relating to the floods in 2013 (photo: BA Street Art)

“There were people who had more than 1.80 metres of water in their homes so the houses are submerged in the water,” recalls Luxor. “I painted the first mural about the floods two days after. I believe the floods were a terrible blow for the city. Personally, I didn’t have anything ruined by the floods or lose anything other than a few material possessions but a lot of people suffered and are still affected by the disaster.” Another mural on a house that was flooded in La Plata (2013) (photo: Luxor)

Luxor’s artworks like those he painted related to the floods often have a close connection to the people around him. “More than anything these murals were painted for the people of La Plata which is the city that allows me to live doing what I do, that always puts up with me and makes me feel good. My way in such a hard and difficult situation is to return to the street with affection and carry on painting. Like a hug, a mural doesn’t solve problems but it can comfort and support those affected.” Luxor draws inspiration from different indigenous cultures and in particular the culture of the Aguada (a tribe from the northwest of Argentina) and pre-Colombian civilisations. “I like their vision of life, the universe and the cosmos and how everything is in harmony,” he says. “These elements and messages always appear in my works. For this reason I like strong features and using gestures that have an indigenous feel.” 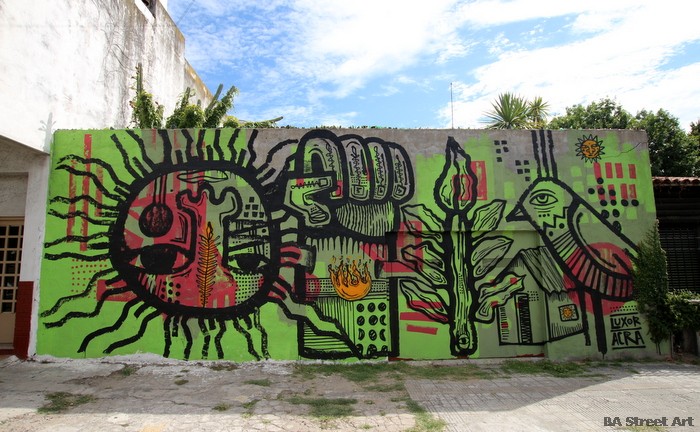 There’s also a positivity that shines through in Luxor’s works. It has to do with the artist himself, his view of life and about people taking responsibilities for their own actions. “The message is” “Grow, fight, make your mark and move forward. Take a hold of yourself and believe you are the only driving force to change reality. The first thing that you have to change is your own world in order to change the world itself and it requires changing your mind and spirit.” 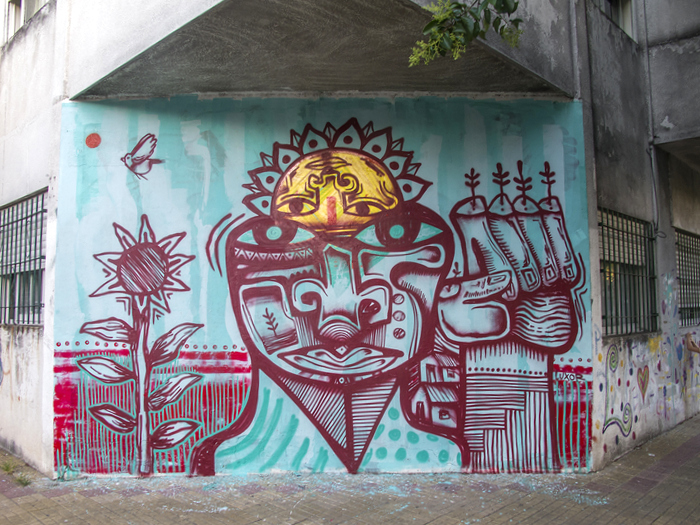 Luxor explains in a bit more depth some of the symbolism in his murals and paintings. “The fist is the fight itself. It’s an icon that doesn’t need too much explaining. It’s very direct and talks expressively about the fight. It’s saying ‘Fight, go! It’s like a protest poster.” The sun is important in Mayan and Inca culture and is a symbol that often features in Luxor’s murals. “Inside the artwork, the sun gives us energy and is in constant motion. The sun is always revolving so it never stays still. Talking about the sun is all about energy and movement from within one’s self and towards the outside.” ‘Fuego’ or ‘Fire’ is the name of Luxor’s show at BA Vault Gallery which opened last week and he explained why flames appear in a number of his paintings and murals. “Fire is a message that is really strong in my artworks,” says Luxor. “It’s not only the fire that makes you feel alive but it’s about the spark that makes you want to achieve everything you have set out to do and knowing that it can all be constructed in a dynamic way -that’s the fire. It’s motivating yourself to be who you are and this spark is what goes out when you die.” Birds also feature prominently in Luxor’s works. One mural he painted in the neighbourhood of Coghlan in 2015 shows a character holding a block of gold and a bird escaping from a cage. Luxor explains: “Each animal has its own significance. Almost all the characters and animals I paint have their different meanings. The characters that I am working with are normally more subordinate than the central figure. Before I painted characters that were sometimes inside an animal, now the animals accompany the figure with icons also inside so it’s not just the birds that are in the foreground.” He adds: “Birds I paint as free spirits. Often a bird is depicted inside a cage and it’s their world but in reality their world is as infinite as the sky, so I like to think about an open message.” 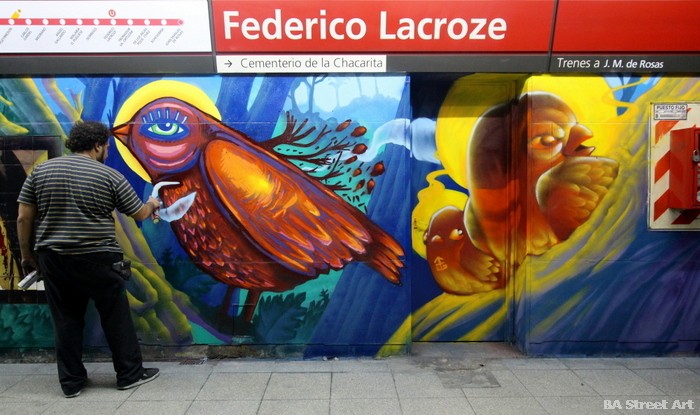 In the last couple of years, Luxor has painted more murals in the city of Buenos Aires including artworks in Federico Lacroze metro station with eight other artists that was a project organised by BA Street Art. One of his designs features a bird. “The birds inside my murals always have the freedom that also the characters have. They form part of a composition where freedom is possible in a world where there is also oppression and death. They have constant freedom so the branches that grow are not cut off and the birds are not in cages and neither are the people.” 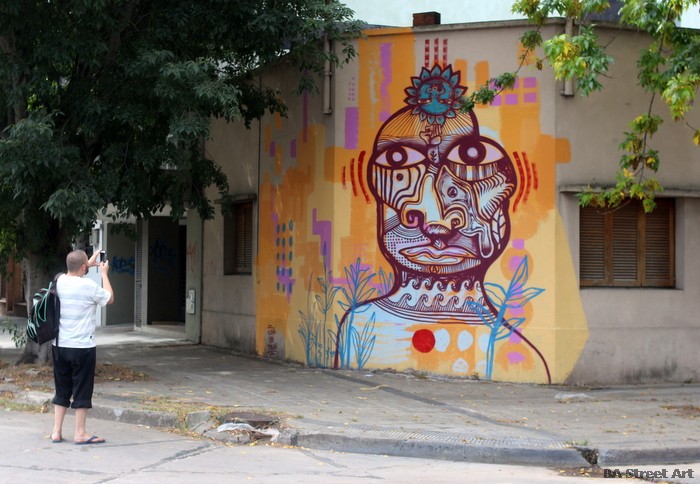 The eyes of many of the figures Luxor paints often look directly out of the wall rather than to the side or in another direction. “I feel that the look is very important in getting to know a person so I often show a character that is looking with a deep gaze where one can see another universe through this look,” he reveals. “The figures are nearly always looking towards the horizon not directly at you but they are saying: “‘What are you doing?’ They say the eyes are the windows of the soul. This is my intention that the eyes should reveal the soul.” 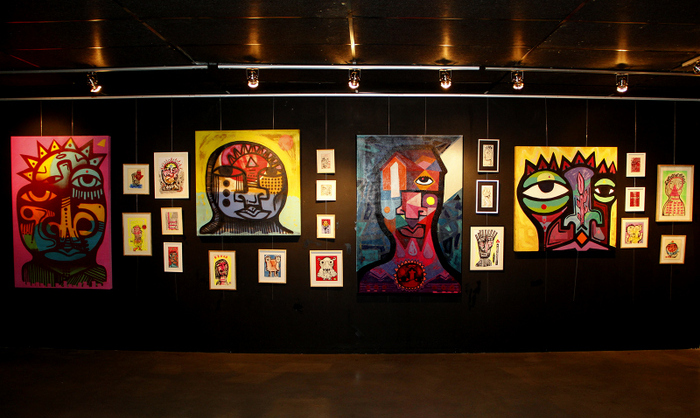 Luxor has created more than 60 paintings and drawings for his show at BA Vault Gallery put together in less than three months. “I try to have two elements to my work – one is the murals and the other is my paintings which are the inner reflection of the mural from which the ideas for my murals are born,” he says. The exhibition “FUEGO’ has been extended until Thursday 10th March. “I have had several sales of artworks in La Plata but I have never done one in the city of Buenos Aires so I am really excited. For this reason I got in touch with Matt Fox-Tucker, director of BA Vault Gallery to organise the show. “The message in my murals is the same as the subtitle of the show – ‘FIRE – Action must not be a reaction without a creation’. The concept of the show is about action and reflection. When you paint in the street you always have to accompany the people.”