Stunning murals of brightly coloured punks and beautiful female figures made out of geometric shapes have become a common sight on the streets of Buenos Aires. They are the creations of Argentine street artist Patxi Mazzoni Alonso. Patxi, 25, began painting in the street when he was 18.  “I started to paint doing illegal graffiti, making a mess, destroying walls and bombing, these kind of activities,” he revealed. “When my son Lanz (6) was born, it started a revolution in my head and there were responsibilities, studies and work that needed to be done and I realized I could still do what I was doing but do it in a legal way and create something really positive at the same time.” Last year Patxi started exploring a different theme in his art, that of the punk. Each punk is distinct with a different hairdo, clothes or posture. One is flying, another is jumping, one is squatting and another is reading. They carry paint brushes, aerosols, paint rollers and books and are smartly dressed with stripy cravats, ties and scarves. 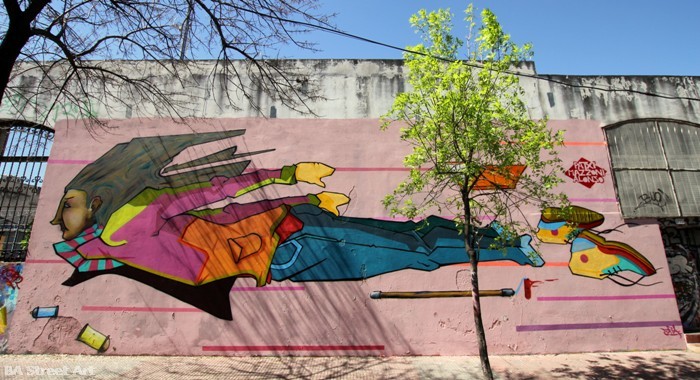 The stereotypical punk with a Mohican, body piercings and  a leather jacket is often misunderstood, according to Patxi. “The punk is thought of as a rebellious person who draws attention to himself or herself for their hair, their fashion, they wear studs and some people think they are dirty,” he says. “It’s down to ignorance but many people disapprove of punks and think they are bad guys.” 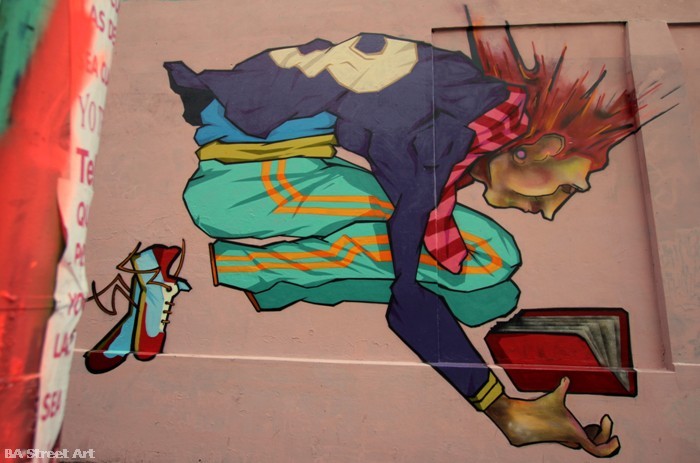 Patxi added: “The idea (of painting punks) is to also promote study, work, education and music and show the punks visually to people who have rejected them and don’t recognize who they are. A punk could be a university graduate or a working professional but people associate them with laziness so the idea is to get rid of this stereotype.”

So far Patxi has painted half a dozen or so punks around Palermo, Colegiales and Recoleta and also at recent street art festivals Zig Zag in La Plata, Meeting of Styles 2012 and Tigre 100 x 100. He added: “Aesthetically punks are great to draw. If you are looking for the aesthetic when you are painting rather than a message, the punk could be any person you choose.” Before starting to paint punks, Patxi’s murals of naked ladies could be seen all around Buenos Aires, and he explained the thinking behind his designs. “In a year and a half I painted about 20 murals of women,” revealed Patxi, “It wasn’t just to show the naked body but to paint with a lot of different colours using layers and points. I wanted to show a little more the aggressive side of a woman because in reality women are looked upon as the weaker sex and the idea was to show their beauty in a positive and inoffensive way. In reality it’s rather the opposite and due to male chauvinism and sexual discrimination, women are often not treated with the respect they deserve. Therefore what I am trying to show is the vulnerability of a woman but with all the colours that I use to cover her body she comes across in a different way, as stronger.” 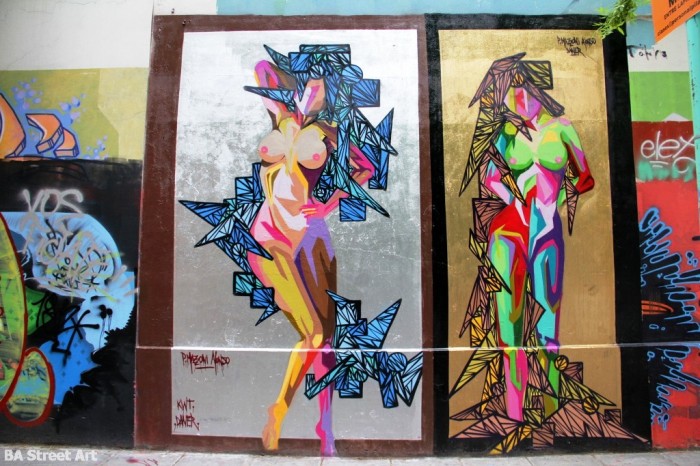 One of Patxi’s stunning murals in Palermo (above) depicts two women next to each other in very different poses. “You can view the first woman totally liberated in a sexual position with her hair by her side, wrapping around her showing a woman who is free,” he explained. “The second woman is submissive with her hands tied behind her back and the same hair that is bound around her feet and prevents her from moving. The idea was to show two girls who are totally different characters.” Redhead in Belgrano where sexual assaults and robberies took place

Patxi has painted an eye-catching redhead with long hair close to Belgrano C station (above) and revealed the story behind the mural. “Near this station there used to be robberies and assaults on women in particular so the idea was to show a little bit of perversion with a woman alone touching herself in the moonlight to relate to the place,” said Patxi. Another stunning mural he has painted along the busy street Luis Maria Campos near Las Cañitas (below) features a woman lying down with her hair resembling the leaves of an adjacent tree. “The idea was to do something provocative but not on the sexual side, more on the sensual side with an innocent gesture with her hand,” Patxi explained. “It was a representation of a woman, I didn’t want to do anything erotic, it’s something sensual without relating to sex and it’s about the strength of the woman and for this reason I painted her with a lot of colour.” 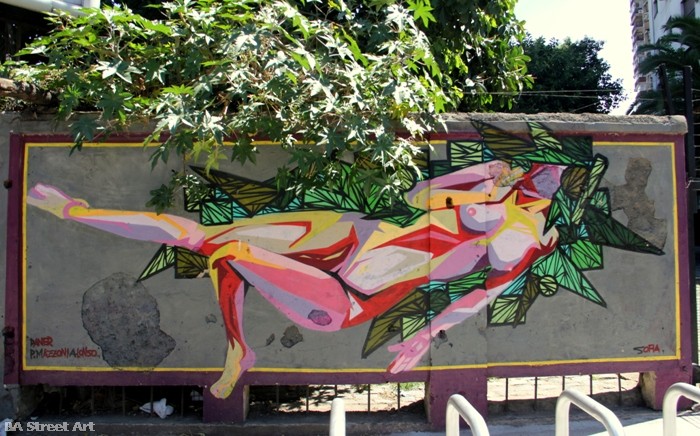 Sensual world – “It’s something sensual without relating to sex, it’s about the strength of a woman”.

It was International Women’s Day on 8th March celebrating the social, economical and political achievements of women around the world. “In Argentina we only started to recognize women’s rights about 50 years ago and the truth is that in many jobs for example women are still paid less for doing exactly the same tasks as men,” bemoans Patxi. “It would be good to get rid of this chauvinist way of thinking and to start to take this issue (of gender equality) more seriously. The woman is a person just like everyone else, not for the question of her sex but she should have exactly the same rights as a man.” Without a face – with Leo Tachos

Interestingly, many of the women that Patxi has painted don’t have facial features. “When you walk along the street and see a woman you can identify with her,” says Patxi. “If I paint a face of a woman with blonde hair and blue eyes and then a brunette with brown eyes sees it, she won’t identify herself with that person. On the other hand, if I don’t paint a face, it becomes a focus of attention before you look at her body and each person can interpret the message how they like.” Mural with tribute to Sofia

The woman who is the biggest inspiration to Patxi is his girlfriend Sophia who is a photographer. “Sofia loves what I do,” says Patxi. “When we are talking, I like to look at the poses she makes and if she is sat down I draw her,” he said. “I also paint canvases with acrylic and oils and all the paintings I have done are from photos she has taken. I believe as an artist you always have your muse or someone who makes you come alive, Sofia is my inspiration.” Patxi lives in Palermo and has painted half a dozen or so voluptuous ladies in a variety of different poses around the neighbourhood and the female form is something that he loves exploring in his art. “The truth is the woman is much more fascinating to paint than a man for the subject of the curvatures of her body and everything,” Patxi enthuses. Patxi started out as a graffiti writer using the tag ‘Daner’ and painting with a lot of graffiti artists from the Province of Buenos Aires however it was the suprematism art movement that focuses on the use of geometric forms such as squares, rectangles and straight lines that has had one of the biggest influences on his style. 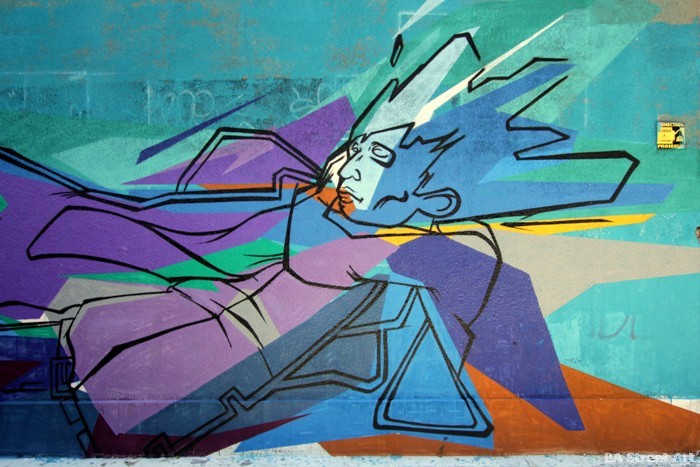 Patxi uses aerosol in many of his murals as well as paint rollers and brushes. And to create precise lines, acute angles and shapes for some projects, he also uses masking tape. Despite having a background as a graffiti artist, the use of tape is something that hasn’t gone down well with a few graffiti writers who have painted alongside him on the streets of BA. “All the graffiti artists who paint letters say using tape is cheating,” said Patxi. “I also consider that when you start out painting you shouldn’t use tape but once you know how to paint straight lines with aerosol, the tape can save you so much time. If I want to paint a straight line of 3 metres for example, it might take me 10 minutes or more to do it freehand but if I use tape I can do it in one minute. It’s a question of the time it takes and if it is a big job I will use tape, if it isn’t there’s no problem.”Check out more amazing designs by Patxi Mazzoni Alonso hereInterview and all photos © Buenos Aires Street Art