Gaia has been painting an eye-catching and sensitive new intervention with Nanook on the front of an ice cream factory in Barracas, Buenos Aires. In an exclusive interview with Buenos Aires Street Art, the New Yorker and Baltimore-based street artist, who is in Argentina for Meeting of Styles 2012, told us about the concepts behind his latest design and how his interventions relate specifically to their location and the people who live and work there. 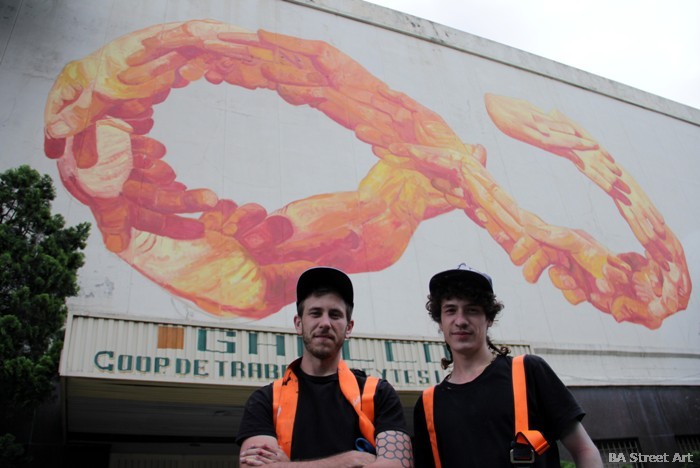 Participating in Meeting of Styles 2012 in Buenos Aires, has also given Gaia the chance to hook up with his close friend Nanook who is now staying in the Argentine capital and paint a new mural together. “Nanook is like my brother, we lived together for almost two years and I haven’t seen him for about six months,” said Gaia. “He’s been travelling a lot and now is living in Buenos Aires but Meeting of Styles brought me here so it’s great that we can get together.” 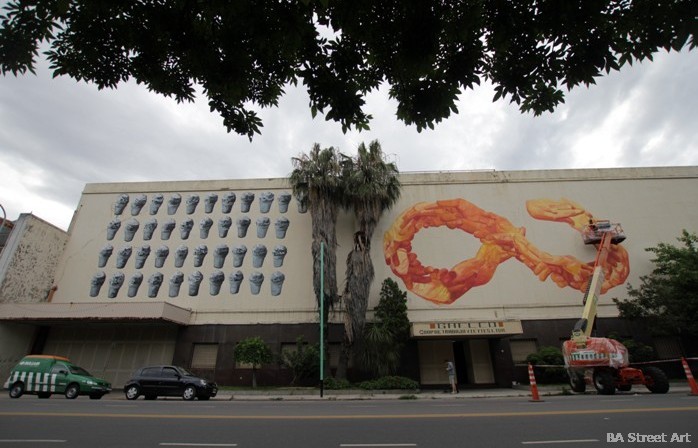 Their new collaboration features two designs, one with a series of ice cream cornets and the other with a chain of hands and will take the duo a total of four days to complete. “This piece is on GHELCO, it is an ice cream factory but it’s a very special factory in that it is a “fabrica recuperada” (a recovered factory) and has been an occupied factory since after the crisis (in 2001),” revealed Gaia who had done extensive research about the history of the company and its workers. “It’s something that I had heard about before and I read ‘The Silent Change‘ or parts of it on Google Books because it’s difficult to find but never did I think that I would be painting on an ice cream factory.” 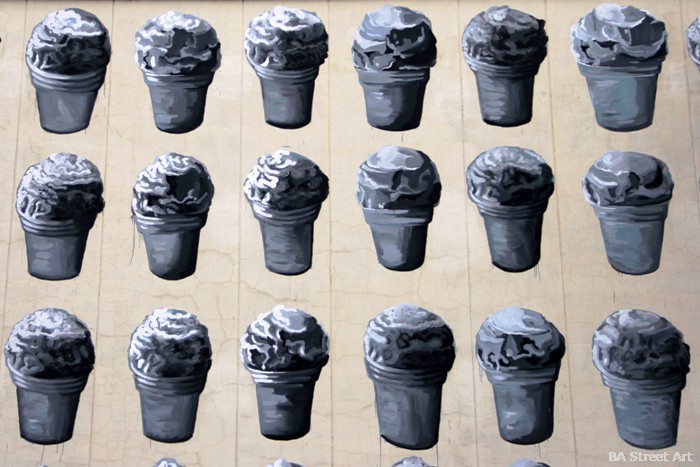 The factory workers formed a cooperative named la Cooperativa de Trabajo Vieytes Ltda in 2002 but they continue to work for the parent company GHELCO. “The factory was one of the first to make that transition, so the hands are about the chain of neo-liberal economics, the boom and bust of Carlos Menem (ex-president of Argentina), and instead of accepting unemployment they occupied the factory and got a court order to start working again, revealed Gaia. “It’s essentially expropriation whether you like it or not. They started this movement with a whole bunch of other factories and so the chain has been broken because they finally got out of this boom and bust cycle.” 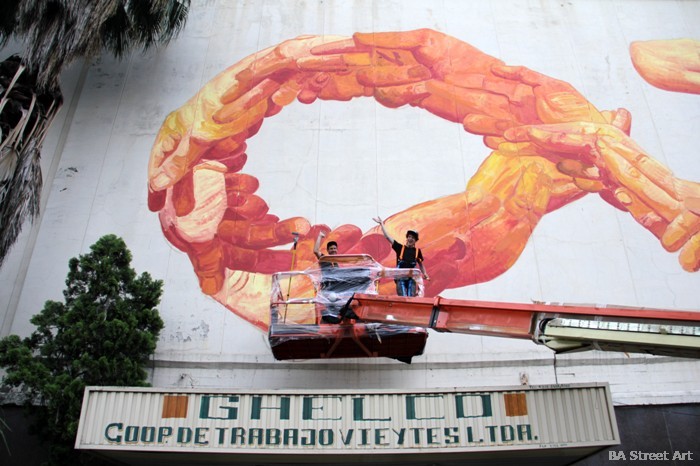 Nanook and Gaia at the GHELCO factory in Barracas

Gaia added: “I don’t know much about the economics of the chain but it is kind of transcending that cycle and of course they are considered the workers’ proletariat of the modern age. In America, there is plenty of manufacturing in cities like New York but this is a real factory and each one of the ice creams signifies a worker – so there are 41 workers in this factory.” 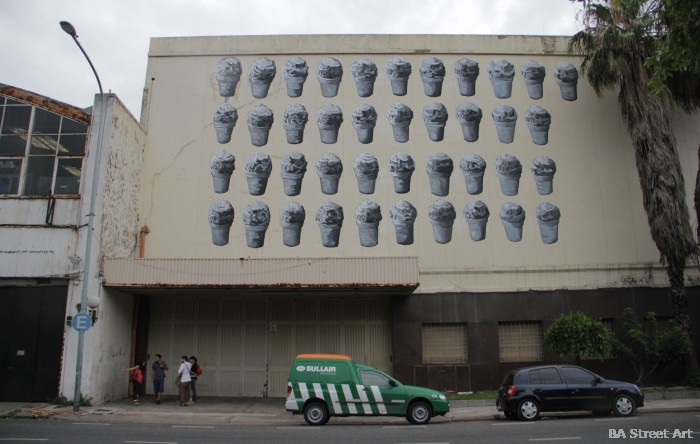 On Thursday, the day after Gaia arrived in Buenos Aires, he and Nanook went to the factory to meet the workers in the co-operative to discuss what they were going to paint as the pair only had a few days to complete the project. “We showed them some ideas and asked them what they wanted to see,” said Gaia. “They really liked the chain of hands because it signifies the work they do.” 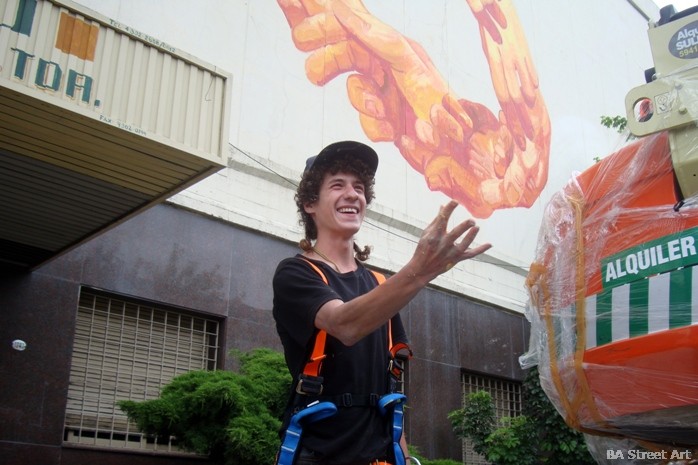 Gaia, 24, added: “We had to incorporate ice cream cones somehow but we didn’t really know what we were going to do with the left side of the building so we asked them. I’d just done a big portrait in Philadelphia with similar colour tones so we had this idea that maybe there is someone who we can paint that means a lot to the guys from the original movement or someone who is very important to the factory but they said they have a democratic process and make all their decisions unanimously and it wouldn’t make sense to paint just one person so the ice cream cones were really a great way to solve the problem.” 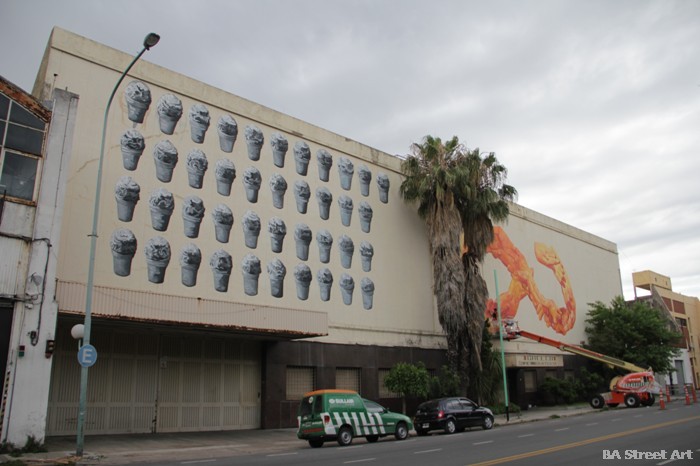 And Gaia says the factory workers seem to like what they have done so far. “I think they are really happy with it,” he said. “It would be interesting if you got their position on it but every time they come out they seem pleased which is really nice to make something specifically for this place.” Gaia revealed that the interlocking hands represent togetherness and a new cycle. “It’s a new chain or a new sort of process but that final hand will eventually be a voting hand considering that they are the workers and the management.” 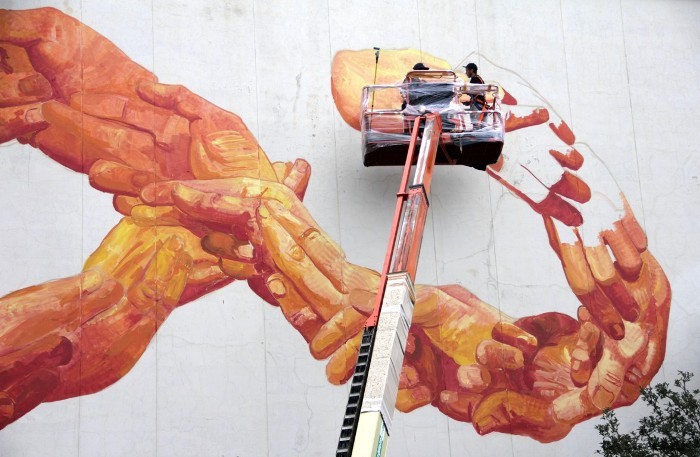 “Nanook and I, we work a lot on themes of domination and structures of power through very simple aesthetics and so the cycle is always represented in our work in some sort of capacity whether geometrically or liberally. Every message comes from the specific place where we work. I only think of my personal style as being something that is restrained in my own mind. It’s just how I know how to work so I work with certain motifs, I work with certain brush strokes and movements with the can and certain elements that I love to incorporate but that also is sort of a limitation in my own mind and so every place generates a subject matter and the personal aesthetics come second.” 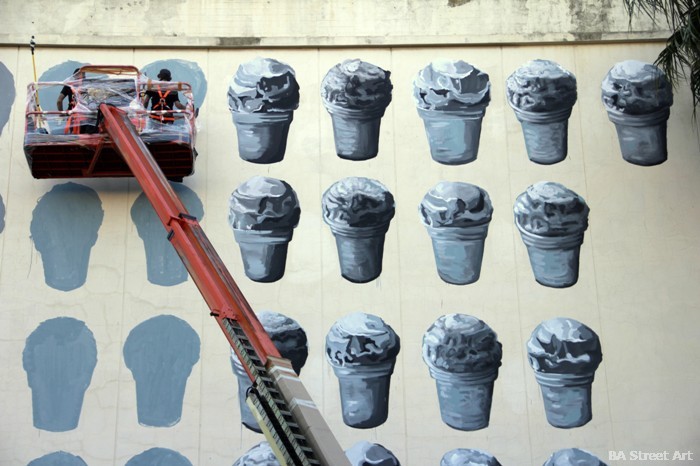 “However I am still constrained by the person who commissions me because they want to see my continued work and also my own personal limitations but I think it’s extremely important to work site specifically,” Gaia explained. “Wherever I go I want to speak with the people who are orientated around these spaces but also we’re representing something that is kind of invisible not necessary what is happening in GHELCO. With this mural we’ve made the invisible more apparent to the outside world and represent a concept that we both can share rather than me just coming with my own message, that just wouldn’t make sense.” 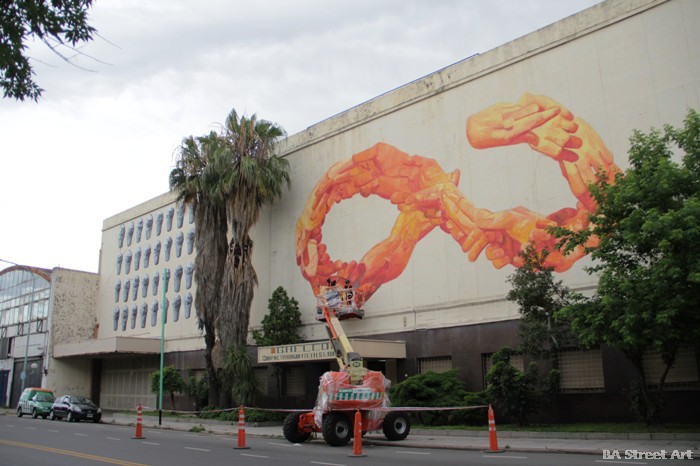 Gaia is perhaps best known for his stunning animals and half animal half human creations that  pop up in urban settings and in particular the rooster. ” The rooster is the messenger and it starts with a lot of biblical responses because I was working in a north-American context and when I was younger it was what can I do that speaks to you from the east coast of America that was sort of rooted in Christianity,” said Gaia. “I  grew up a Christian but I am not a believer whatsoever. The rooster is about opening up an Albert Bierstadt painting which is a reference to Manifest Destiny (that American history was built on a chronological record of significant events, each event having a cause and subsequent effect on another event) but a lot of the work we both do tends to deal with gentrification.” 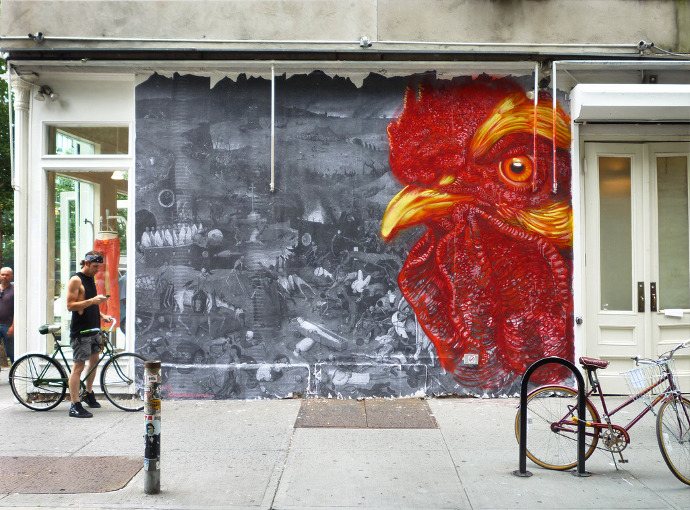 Gaia added: “In a way it’s strange to come to a neighbourhood which is very manufacturing orientated and that our work is being presented according to a model which will eventually push them away so we are a facet in a process that is always trying to find more money for ground rent so the rooster is very much about gentrification and gentrification being attached to the frontier and ‘Manifest Destiny’ and something that is very particular to the United States but everywhere there is a frontier.” 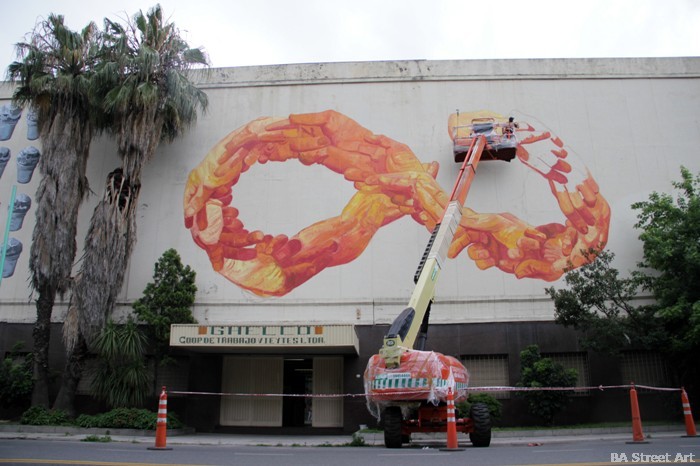 Gaia painting in South America for the first time

It’s also Gaia’s first trip to Argentina and has so far it’s been a very different experience. “It’s my first time painting in South America and it’s awesome,” enthuses Gaia. “It’s so different that the United States, it’s very refreshing and makes you a little bit sad to go back to the U.S. because it’s mostly bullshit and most of the stuff made in the U.S. is mostly bullshit. It’s so orientated around the brand and the personal aesthetic regarding the brand. In Los Angeles and New York, so many of the great street artists like Swoon and Elboe-Toe, they have kind of disappeared from the landscape. The vacuum has been filled by people who are just trying to hype themselves. Of course it is necessary to eat but it’s important to remember the specificity.”

Today is the final day of Meeting of Styles 2012 “All in One” in Buenos Aires. Check out estilolibrearg.com.ar for more information about the festival.